This is total genius – it doesn’t just use the layout of the periodic table, it uses the format too, grouping the different curse terms the same way family groups of elements are on the real periodic table. Clever, funny and rude, wonderful combination… It’s a fab poster from Modern Toss (via Jezebel) 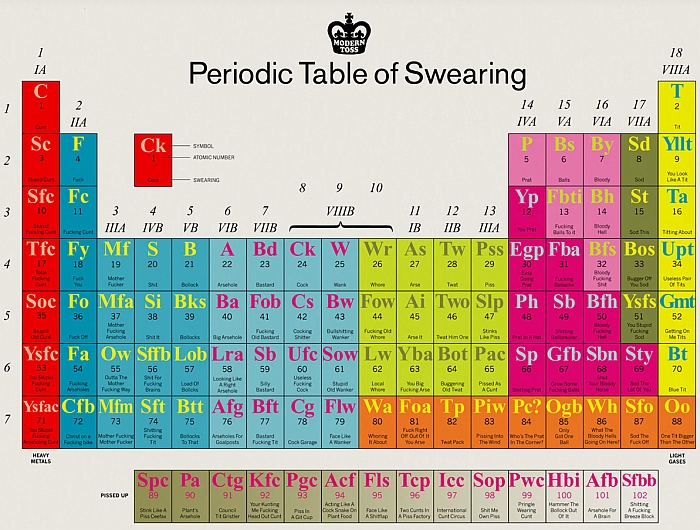 With only days to go Sarah ‘pitbull with lipstick (very expensive lipstick) Palin has been fooled by Canadian comedian Marc Antoine Audette into thinking she was on a phone call with French president Nicolas Sarkozy, which went out on a Montreal radio station. The whole Palin thing – utter lack of a grasp of geopolitics, foreign relations, her dubious record (the library interference when she was a humble mayor, possible misuse of family connections in jobs, trying to avoid freedom of information requests on her work by using personal email accounts rather than official government ones), her hideously intolerant right wing stance, her love of shooting animals for leisure, the pretence at being an ordinary working mom while spending more on clothes and hairstyling than many families bring home in a year, her apparent lack of knowledge of what the duties of the VP actually are – would be funny, except even after all this there are still a lot of Americans who not only would vote for her, they are talking about how she should run for president in 4 or 8 years…

was declaring to the reporter he wouldn’t vote for Obama not on political grounds but because ‘he was a Muslim’.I can’t help but wonder at the sheer stupidity of some people, but then again a lot of those numpties are the ones who voted for a retarded chimp to let in Dubyah (well, second time, first time his brother and dad’s friends in the Supreme Court handed the election to him) and before that voted a dreadful B movie elderly actor who delighted on ratting out his fellows during the McCarthy era into the top job. Watching one news programme some ignorant redneck woman When the reporter pointed out he had been a regular church-goer for many years she said that didn’t count. No, she wasn’t a bigoted, racist cow at all… Although being someone who dislikes organised religions of all types I always find it quite disturbing how much relgion plays into American politics to begin with anyway, especially in a country which likes to boast how state and church are seperated by the Constitution.

Thankfully, despite idiots like Cardinal Winning constantly sticking his oar into Scottish politics (you have your own opinion, but stop trying to tell groups how they should be thinking and voting) its not the same here; in fact when Tony Blair started talking about his mate God we all got rather uncomfortable because its a private matter. And because we think a politician is meant to be answerable to the citizen, not some mythic deity.

Its Edinburgh, its August, its time for the first stirrings of the world’s largest arts festival. The Fringe starts officially over the weekend, but already most shows are in town and running their (much cheaper tickets) previews. The husband and son of Mel’s cousin are over from Norway and I met them all straight from work at the Pleasance, one of the main spots for Fringe life. Mel and I introduced the Fringe newbies to our laid back way of doing it, which is to park out bums on a seat in the cobbled courtyard of the Pleasance (a hub with dozens of shows going on all the time, from tiny rooms to proper theatre sized shows) and wait for the many people coming round giving out flyers and telling folks about shows until we saw one we liked and off we went to see Son of a Preacher man, a stand-up comedy with Markus Birdman, an aetheist son of a clergyman – it was brilliant and I highly recommend it if you’re going Fringeing. 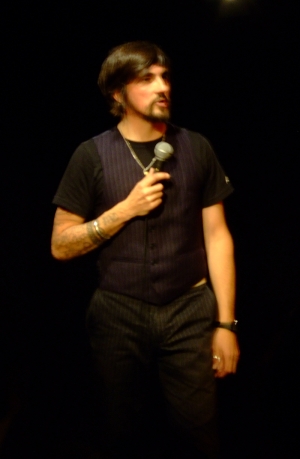 Afterwards we headed back down to the Royal Mile to get some food at Wannaburger and as we approached the Old College Building we heard a powerful beat and decided to have a quick look. We found Binari, a Korean musical group pounding drums in the old quadrangle, the sounds echoing around the space as they performed a sound check, that wonderful, almost frantic and kinetic drumming and singing. And its just so cool that walking past somewhere you just come across something like this, but that’s what happens in Edinburgh at this time of year. Its a circus, its maddening, busy and crazy and at the same time brilliant. 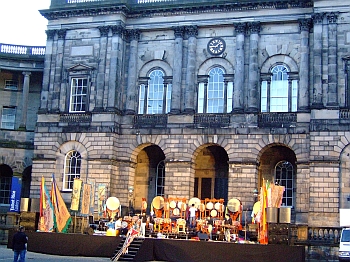 Last time I was in this building was for the launch of a major Scottish history book in the gorgeous Neo-Classical space of the Playfair Library, this time it is Korean musicians in the quad filling the night with music. After we’d had a late meal we walked up the Royal Mile, even near 11pm still buzzing with people as the Fringe starts up then as we approached the top of the Mile we had another treat. 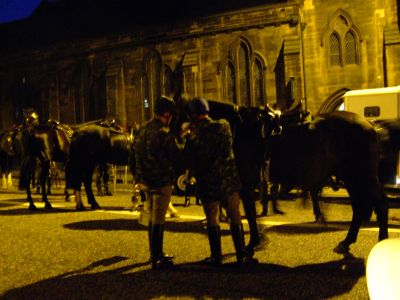 A rehearsal for the Royal Military Tattoo was finishing up at the Castle and the cavalry were leading their horses down towards the horse boxes to take them home. Imagine a warm summer night in the middle of the Old Town, lights from the Tattoo flickering across the Castle and bagpipes playing while the clip-clop, clip-clop of horse’s hooves come down from the Castle, creak of leather and clink of metal as cavalry troops lead their immaculately groomed animals down the cobbled street then round past the hub to the waiting transports. Even in Edinburgh this isn’t exactly an everyday sight. 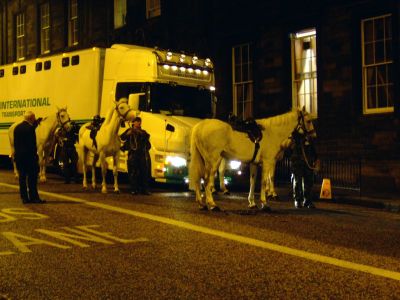 How beautiful is this horse? Just think, this is all happening in the heart of a capital city at 11pm, with a huge castle right behind me as I took this while behind the horse you can see the floodlit Herriot’s School which at night looks like where very young wizards get sent before they are old enough to go to Hogwarts. 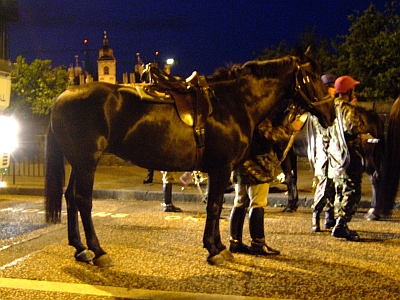 Even at that time of night you can see the sky just doesn’t get fully dark at this time of year. Shame I didn’t have the tripod to take these properly but obviously I wasn’t quite expecting this. A little bit on unexpected magic. 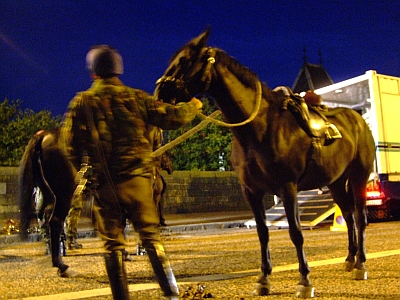 The Beeb has been posting material to YouTube, higher quality than usual, although it isn’t that great a mix so far to be honest – a lot of it is very short clips that were trailers for programmes shown on TV or the BBC websites before and I’m damned annoyed they blocked the embedding function which rather undermines the notion of YouTube and people sharing videos by embedding them on their sites and blogs. Still, they did have this clip from Mock The Week which is worth a look where the comedians compete to come up with unlikely lines for given situations.