I missed this first time around but BBC Radio 4 is repeating a series on the way the English language and they way people use it changes; it’s typically Fry being clever, informative and highly amusing all at the same time.

I’m not going to go into the Russell Brand/Jonathan Ross thing much – they acted like a pair of drunk teen tubes (made to look worse by the fact Andrew Sachs has acted like a gentleman); joking on the air is one thing, regardless of taste, but phoning up an old man and leaving lewd messages on his answering machine on air is pretty poor (and obscene phone calls are illegal as far as I know so they are lucky he never asked for charges to be pressed). I think they should be punished but with style – hold Brand down and tell him his rat’s nest hair is going to be forcibly combed. That will scare the hell out of him. And tell Woss he is welcome back on the air but must attend elocution lessons to lose the speech impediment and also learn enough manners to be passed off as a Duchess. Meantime here’s a great take on it from B3TA made by Beau Bo D’or which nicely catches the ridiculous tabloid frenzy that unscrupulous editors have been stoking (come on, there are far more important news stories going on, why is this taking so many columns and so much airspace?): 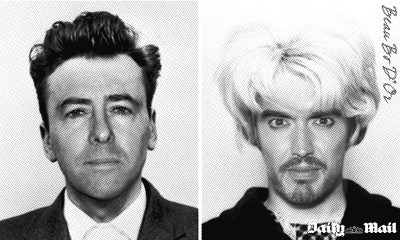 I heard at work from the BBC this week – comedian and sometime cartoonist Phill Jupitus had a very good programme on cartoonists and cartooning a few moths back, which was very well received so Radio 4 have come up with four more. They are in fifteen minute segments, with the first one in which Jupitus meets the legendary Gary Trudeau, creator of Doonesbury (which has been a satirical thorn in the side of many a politician, bless ‘im) was last week – it can still be heard via Listen Again and there is also a permanent link for this one. I’m told that hopefully the other three in the series will also get perma links and not just the usual 7-days only Listen Again. This coming Tuesday sees a chat with some up and coming New York cartoonists, the next week Charles Peattie and Russell Taylor, creators of Alex (which has become very topical at the moment with the financial meltdown) and then finally Bill Griffiths, creator of (among others) Zippy the Pinhead. Full details are over on the FPI blog.

The BBC asked if they could borrow one of my photographs from my Flickr stream recently, to use as part of their Bitesize revision guides, in this case to be part of a audio-visual slideshow to accompany a reading of “The Field Mouse” by Gillian Clarke – my pic of a harvest-time field, taken just outside North Berwick near Tantallon Castle is the first one in the presentation. No money, sadly, but the feel-good factor is quite rewarding, especially since I’m so fond of poetry.

The Beeb has been posting material to YouTube, higher quality than usual, although it isn’t that great a mix so far to be honest – a lot of it is very short clips that were trailers for programmes shown on TV or the BBC websites before and I’m damned annoyed they blocked the embedding function which rather undermines the notion of YouTube and people sharing videos by embedding them on their sites and blogs. Still, they did have this clip from Mock The Week which is worth a look where the comedians compete to come up with unlikely lines for given situations.