The Ballad of Black Tom, 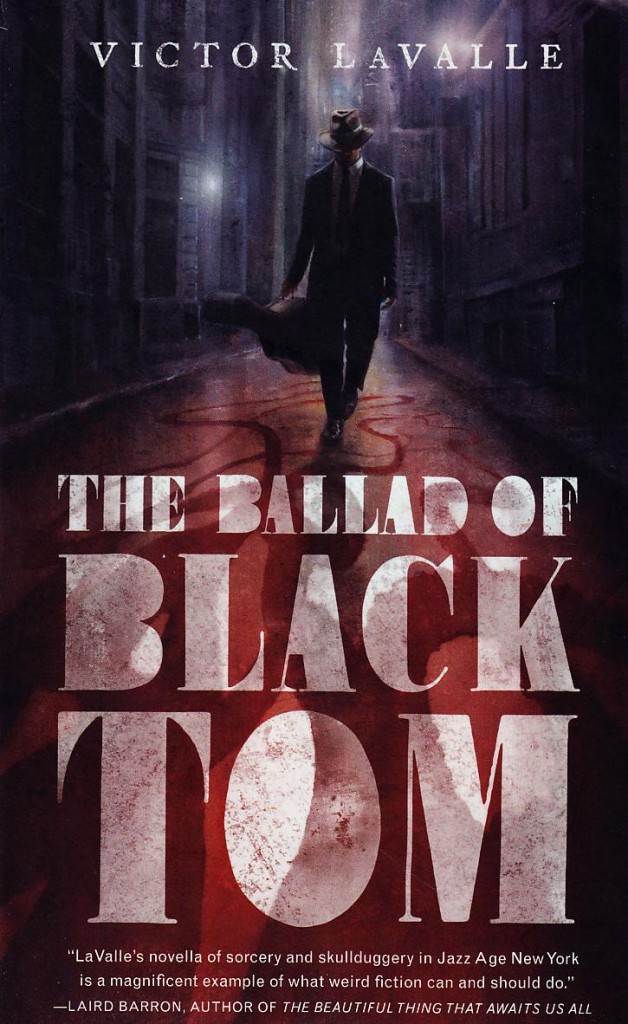 In recent months top SF&F publishers Tor have bee putting out a series of rather tasty wee novellas covering fantasy, science fiction and, here, straying into Lovecraftian horror, and indeed urban horror, the sort that is generated as much by the more vicious, ignorant elements of humanity as it is by supernatural and magical threat. Charles Thomas Tester – Tommy Tester, the eponymous “Black Tom”, is a black man in early 20th century America; it may have been decades since Lincoln’s Emancipation Declaration, but even in urban New York (let alone the Deep South), discrimination and intolerance is rampant, the Civil Rights movement and hard-won battles of the 60s are a long, long way away.

This is an era of know your place, and if you are a young man of colour then that’s even more important – keep to your “own areas” (such as Harlem), don’t get in the way of the white folks (especially the rich ones), and avoid the attention of the police. And given Tommy grafts a living from a mixture of playing a simple repertoire for busking in the street and from running slightly dodgy errands, which can take him outside his comfort zone of Harlem. And we see him early on running one of those errands, delivering a strange manuscript to a mysterious woman in a richer (and whiter) part of town, a book which may have esoteric learning in it, possibly dangerous knowledge. Despite keeping his head down and often adopting the servile and simple stance expected of him though, Tommy’s no idiot, he’s sharp, sharp enough to deliver the book and take his payment, but to ensure an important page is held back so that its knowledge can’t be fully used.

There’s a little hint of the John Constantine around Tommy, not so much a streetwise magus like Constantine, but a man who knows there is more about the world than just what most people see, and this knowledge and his esoteric errand-running bring him to the attention of a very wealthy man who asks him to play his music at a private party at his large house. And it is there that Tommy Tester learns that there is even more behind the everyday scenery of the stage we call the world than he suspected, and he thought he knew a bit. That there are other realms, and dark, ancient beings to whom human civilisation is but an ant hill. But living as a black man in that era of US history, being seen as unimportant, beneath notice almost, is something Tommy knows all too well, and his perspective on the ancient, dark beings is coloured (no pun intended) by how the simple fact of his own skin tone has seen him treated in his own society.

This is a superb read – Lavalle, even in the brief length of a novella, conjures up a superbly atmospheric story, both in terms of the atmosphere of dark, Lovecraftian dread and unease building throughout and also in the way he so wonderfully brings out a real feeling of New York in that period, the different areas with different ethnic cultures overlapping, each with their own ways and districts, and the realism of those streets – all now so changed, entire subcultures and communities moved and changed in the intervening decades – works perfectly as a contrast against the darker fantasy elements. And the aspects dealing with they way race, class and wealth  dictate how someone is treated – does the policeman respectfully raise his cap to you or does he wallop you over the head with impunity – and viewed have many parallels to modern society.

In a mere 149 pages Lavalle crafts an increasing air of menace an unreality lying just beyond the seemingly solid walls of our reality, just waiting to break in, and at the same time does what the best writers do, uses the fantasy to draw parallels to social problems of the present day. This is the first time I’ve read Lavalle, but I’ll be happy to pick up anything else by him after this.