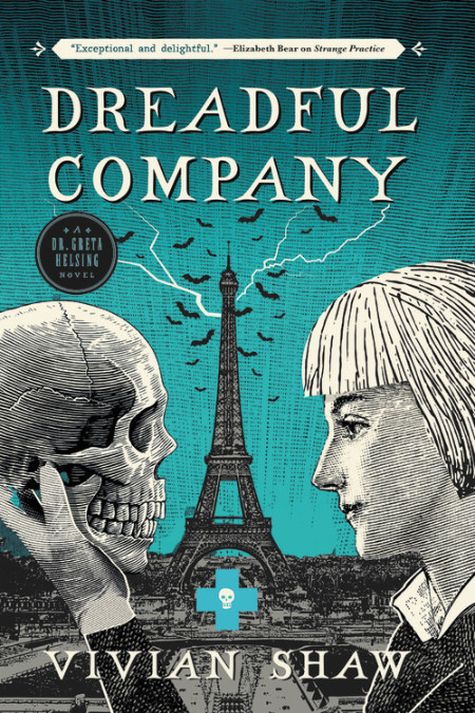 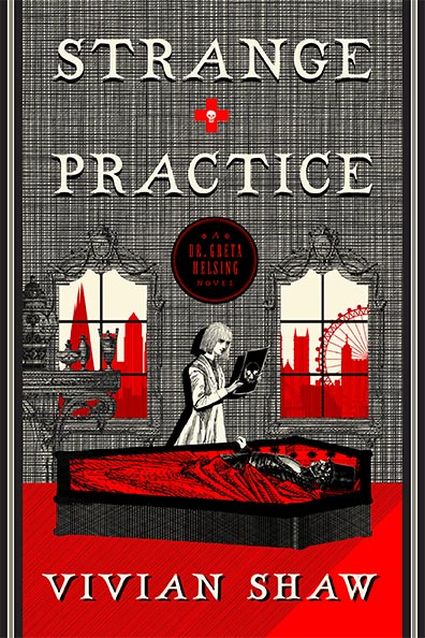 Oh now this was an absolute delight to read. There has been a large trend in the last couple of decades for  urban fantasies, depicting a world that is recognisably our own, everyday realm, but where, usually in the shadows, unsuspected by most people, fantastical elements secretly exist. Charlaine Harris with her Sookie Stackhouse Mysteries (True Blood as it was for the TV version), Jim Butcher’s brilliant Harry Dresden novels (a gumshoe in Chicago who also happens to be a wizard), there has been an explosion in this area of fantastical fiction. So much so that these days I find myself a bit wary of new ones sometimes, but I had my bookseller’s Spidey-sense tingle when this arrived from Orbit, and I trust that little gut instinct. And I think Will Staehle’s cover (and some nice matching interior illustrations with a wicked sense of humour) had much to do with that too, a nice mix of woodcut style, with contemporary elements that also nods to those wonderful old Penny Dreadfuls.

And I’m glad I listened to those instincts, otherwise I would not have met Doctor Greta Helsing (her medical family long since dropped the “van”), a GP in London – in the famous Harley Street locale, no less, although unlike most their Greta is not exactly well-heeled. Except Greta’s practice takes in a very unusual set of patients – she, like her father before her, offers medical care to London’t community of preternatural creatures. Vampires, ghouls, were-creatures, vampires (and indeed vampyres, slightly different blood drinkers), even creating prosthetic bone replacements for elderly Egyptian mummies or treating a ghoul leader with clinical depression problems, it’s all in a day’s work for Greta. It’s long hours, like any GP, but it is very satisfying to her that she is not only helping people, but helping creatures that would never otherwise be able to access medical care.

However, London is a city in fear – a serial killer is stalking the city, the body count is rising, each victim found with cheap, plastic rosary beads. And those are just the ones the public and police know about – there are other victims, victims hidden from society, supernatural beings also being stalked by strange, monk-like figures, seemingly human, but stronger, with oddly-glowing blue eyes and a burning desire to destroy anything “unclean” before their god. And that includes some of Greta’s patients and anyone who helps them…

I’m not going to blow any spoilers by going any deeper into this tale here – it partakes as much of the detective novel as it does fantasy, and as such I don’t want to risk revealing any of the twists or turns here before you get a chance to read it. But I will say this is – especially for a first book in a series – this is a remarkably well-realised world and cast of characters; it really isn’t very long before you find yourself not only enjoying the story but the world demi-monde Greta moves in, a world where you can take the regular London Bus or Underground but which also has ghouls in the sewers, or Lord Ruthven in his Embankment House grand home.

Ruthven is just one of a number of literary characters who populate Greta’s world (in face Ruthven is a close family friend), we also meet the likes of Sir Francis Varney – as in Varney the Vampire (aka The Feast of Blood), one of those great penny-dreadful schockers of the 1800s), although, pleasingly, Shaw doesn’t drop in such famous Gothic characters in the way say Moore would in League of Extraordinary Gentlemen, they feel far more realised and realistic as actual, believable people (who just happen to be centuries-old sanguivores). That’s not me taking a swipe at LOEG, by the way, I do enjoy those too. And if, like me, you have a long-standing fondness for old Gothic novels and characters, this is a lovely extra layer to Greta’s world and its details. Vivian also gets extra vampy brownie points for me for referencing the likes of the Croglin Grange Vampire,

There is also a nice strand of social commentary running through this book – the religious fundamentlism of the “monks” who think they are doing the will of god (while overlooking breaking important commandments like “thou shalt not kill”) has more than a few echoes in the real world, from terrorists to religious zealots who refuse equal rights for those they disapprove of, those who consider themselves so right that they feel they can use bloody violence to enforce their will. The supernatural community that Shaw sketches out nicely here also hints at social problems in the real world – the segments of society that are Different, Not Like Us, Other, and therefore feared, hated, often turned on as easy targets.

There’s a lovely moment where Varney asks Greta why she does what she does, even for beings like him, a monster, damned to the Pit should he be killed. And Greta tells him he’s not a monster, none of them are, she sees them all as people, and she thinks all people should be able to access medical care. It’s a nice pairing of messages, that being a person is more than simply being physically human, it is qualities of being that define someone, and that medical care should be something anyone who needs it can obtain. In a world where many give into the darkness of bigotry and see even other humans as less than human (and therefore deserving of awful treatment) and many can’t get even basic healthcare, these are very welcome, warm, human messages to weave into the story, and nicely done via the medium of non-human beings. They also made me love Dr Greta all the more. As I said right at the start, this was an absolute delight to read. I look forward to more time spent with Greta…