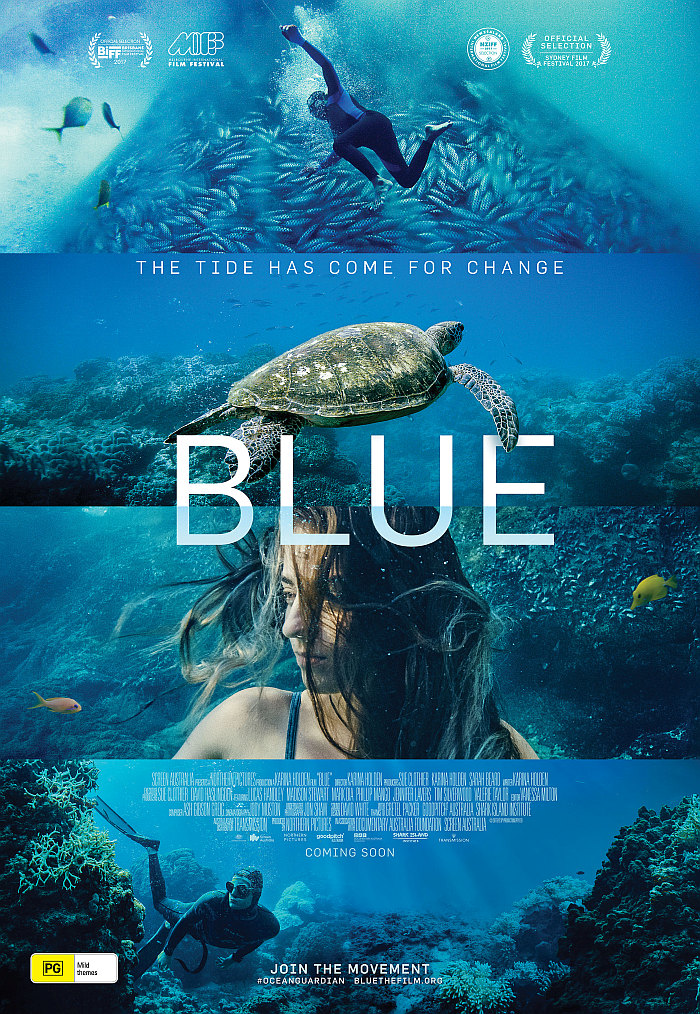 “Wherever you live on our planet, you are connected to the sea.”

This powerful and thoughtful documentary by Karina Holden (Magical Land of Oz) arrives at a very opportune time, as recent reports on the unbelievable amounts of plastic waste in our oceans is highlighted in reports and the media, and the Extinction Rebellion movement is pushing the environment further up the news and political agenda. Blue is a sort of ensemble documentary, taking in different aspects of human-made problems in different parts of our vast world oceans, with several guides, Lucas Handley, Madison Stewart, Philip Mango, Doctor Jennifer Lavers, Tim Silverwood, Mark Dia and veteran diver and campaigner for aquatic life, Valerie Taylor, taking us from bleached corals to the industrial slaughter of sharks to seabirds dying of malnutrition with stomachs full of small pieces of plastic and sea turtles dying a long, slow, lingering death caught in abandoned old fishing nets.

From that you may well infer that Blue is pretty heavy going, and in places you are correct – in fact there are moments here that are not just disturbing but sickening and horrific. Lavers performs an autopsy on a young fledgling, which died while still in the “fluffy” stage, its flight feathers not even fully formed. She strokes the tiny, vulnerable body very gently, her sorrow as yet another animal killed by our throwaway junk culture quite clear from her body language and how she handles the small body. When her autopsy reaches the stomach it crunches when pressed, because inside it is full of pieces of plastic, bits of old buttons, pen tops and more, which the chick’s parents had seen floating in the water, mistaken for food and taken back to feed the chick. 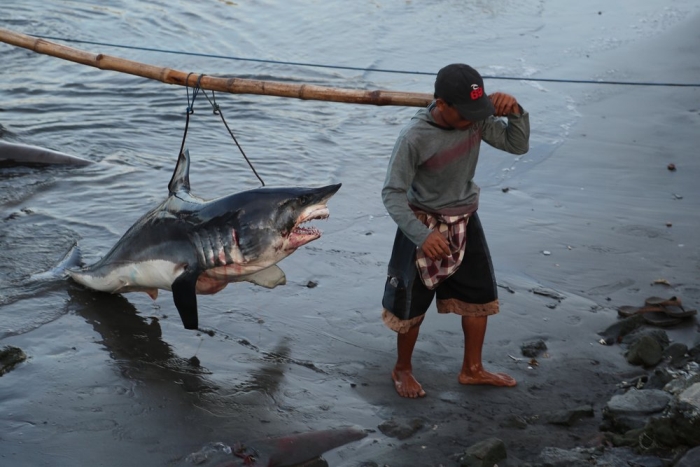 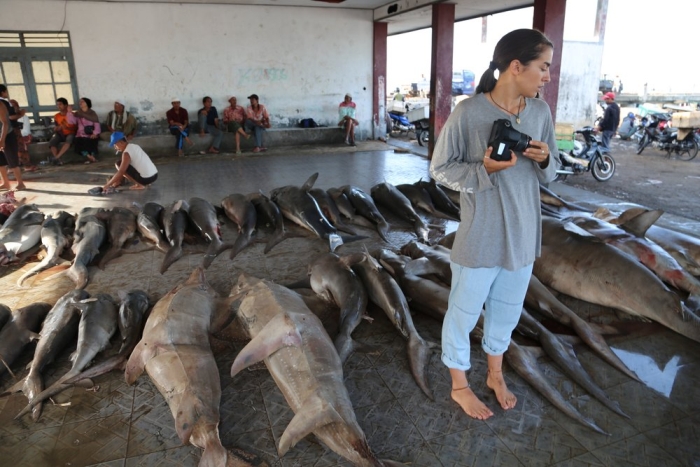 Stewart walks among Indonesian fisherman landing large numbers of sharks. She spots many species she has swum with back home in Australian waters, but these are all relatively small, because the fishermen are catching younger and younger sharks, and since this species is slow to mature and reach sexual reproduction levels, this over-fishing is especially devastating, giving little space for the species to recover, new sharks to mature. As the lifeless corpses are hauled into the sheds with hooks, they are lined up and then assaulted with knives, cutting off the fins – the mutilated remains of the bodies are then dumped back in the oceans, the fins sent off to richer markets, often China. It is to Stewart’s credit that while clearly revolted by this mass slaughter for so little (over seventy million sharks a year), she doesn’t blame the fisherman entirely, she is aware that most of these coastal villages are extremely poor, that they know the sea, they know they cannot continue like this, and yet if they don’t then they and their families will starve, they have nothing else but to harvest these creature’s fins to sell to richer markets.

Each of the experts and campaigners here shines a light on different aspects of how humanity is destroying the oceans, from industrialised fishing that exhausts the seas far beyond their ability to regenerate, to disgusting, huge amounts of plastic pollution (not just floating and looking bad but breaking into smaller pieces that life, from microscopic krill upwards eat, then they are eaten by larger fish, dolphins and whales and birds, moving this pollution up the food-chain – eventually to humans), to the increasing damage to delicate corals (and the great array of life they support around them) to the many old nets cut loose by fishermen around the world, drifting slowly in the currents and all-too often claiming more lives – an especially horrific scene shows a long string of nets, dotted with several bodies of seals, gently bobbing in the underwater current, dead. It’s sickening. And as one expert replies when asked who is responsible for all of this, we all are. 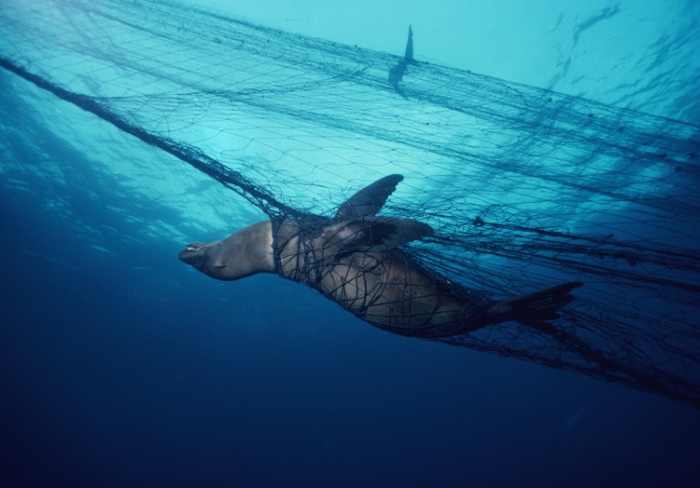 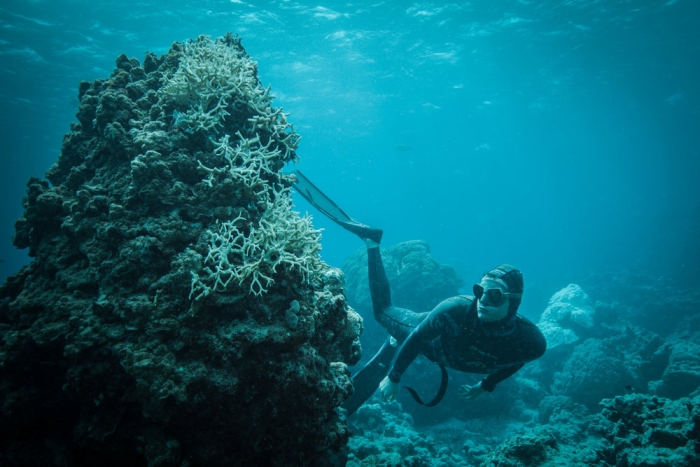 But no, this is not just about the horrors humans have inflicted – often not deliberately, just mindlessly, careless of the consequences of our actions – there is also a huge amount of beauty and even wonder to take in here too. There is some truly beautiful cinematography on offer in Blue, which stands in stark contrast to the vileness of the scenes of pollution or the large-scale slaughter. An early aerial shot shows clear water with moving dark patches – for a moment it looks like oil slicks, but then the dark patches move and it becomes clear these are huge shoals of fish, their movements synchronised, creating what looks from the air like dark moving blobs, then we are below the waves, the silvery, teeming balls of fish zipping and darting around Silverwood as he free-dives among them. In another scene he floats upside down as a whale floats above him, as if man and cetacean are observing one another peacefully. It’s stunningly beautiful, majestic, delivering a real sense of wonder – and reminding us what we’re fighting to save.

Blue is a mixture of the shocking and disturbing and even horrific contrasted with remarkable beauty and wonder, and for all the human-made disasters visited on the oceans – the seat of all life on our blue planet – there is a positive message here: we can slow then stop this brutal assault on the natural world (which is, in the long-term, an assault on ourselves too), we can undo some of the damage, protect others sites (the film highlights how some parts of the seas are now getting the protection national parks enjoy on land), and the film actively encourages the viewers to consider what we can all do as individuals to try and help. 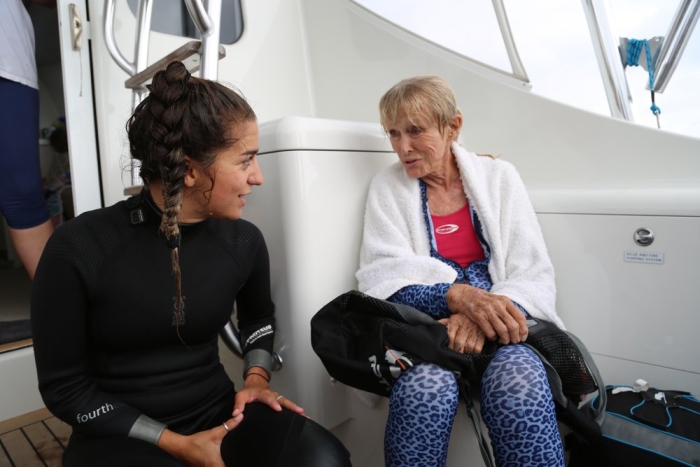 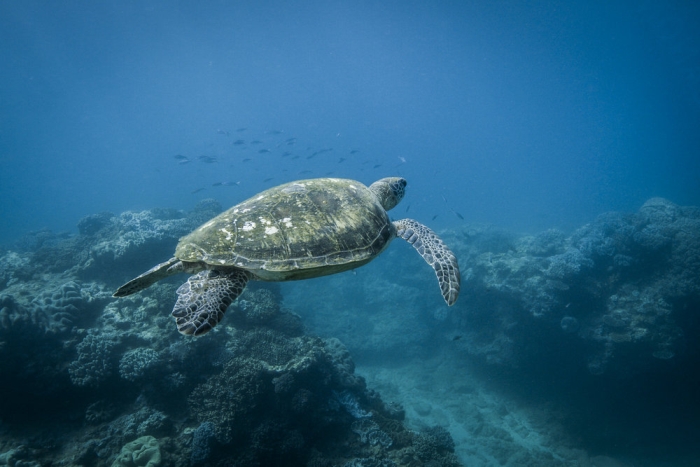 There’s a fight going on here, and despite a depressing toll of awfulness, there is hope, there is still a chance, and Blue, for all the devastation in our oceans that it shows, retains a lot of positive energy and optimism that is infectious. More of us should be watching this and thinking about these issues, no matter how far from our own shores some of these events may be, as the opening quote reminds us, all our shores are connected to those great, globe-spanning tides on our vast world of water, and we all have a responsibility to it.

Blue Trailer from Blue The Film on Vimeo.

Blue is available now on digital on demand, and will be released on DVD on July 1st by Sparky Pictures Ltd. 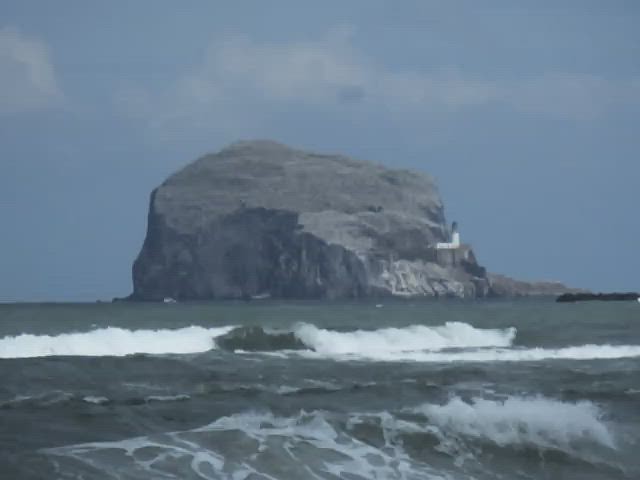 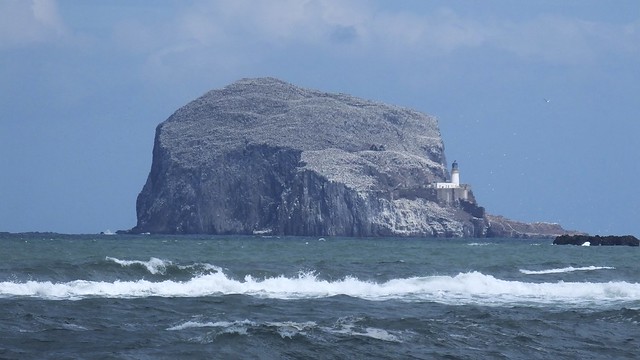 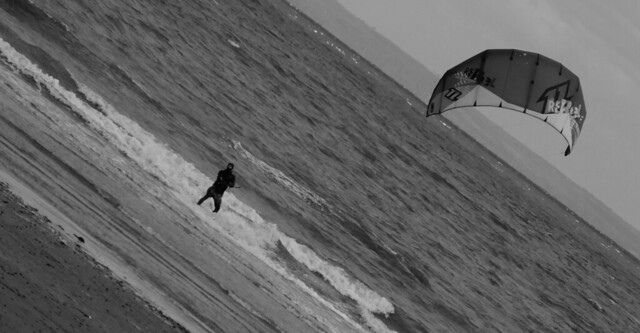 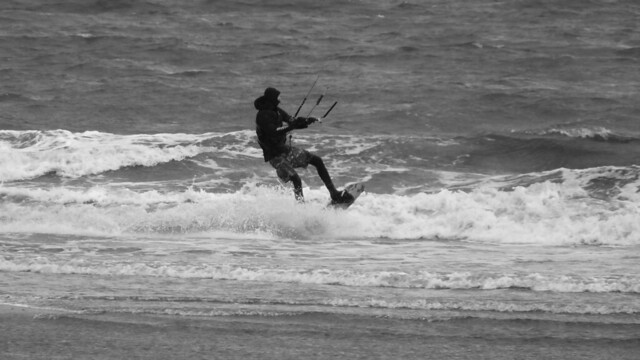 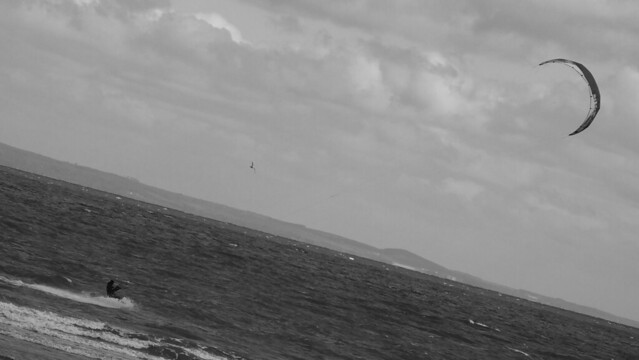 Sometimes you just come across the simplest scene – a woman sitting with her back to you, looking at the sea, a couple walking in the background on the beach, low winter sun casting long shadows – and somehow you think hey, this would make a decent photo. I have no idea why but in colour I just knew it wouldn’t look like much, but shot in black and white it suddenly had something… Down to Portobello this afternoon with my mate and his dog to let him have a run around off the leash on the beach (the dog, not my friend), only to find what was a cold wind in the city centre of Edinburgh was a howling gale coming right off the North Sea at Porty, whipping the waves up into big foaming gray peaks and slamming right into the sea wall so hard they splashed right up the side, across the Esplanade and hit the wall of the structure on the other side. That was when we decided to walk around the block at the worst bit 🙂 Pictures are a bit fuzzy, the wind was so high my camera lens, glasses and my face were all getting whipped by flying sand granules and salt spray, had to clean them repeatedly but within minutes they just got covered with a film of it again.