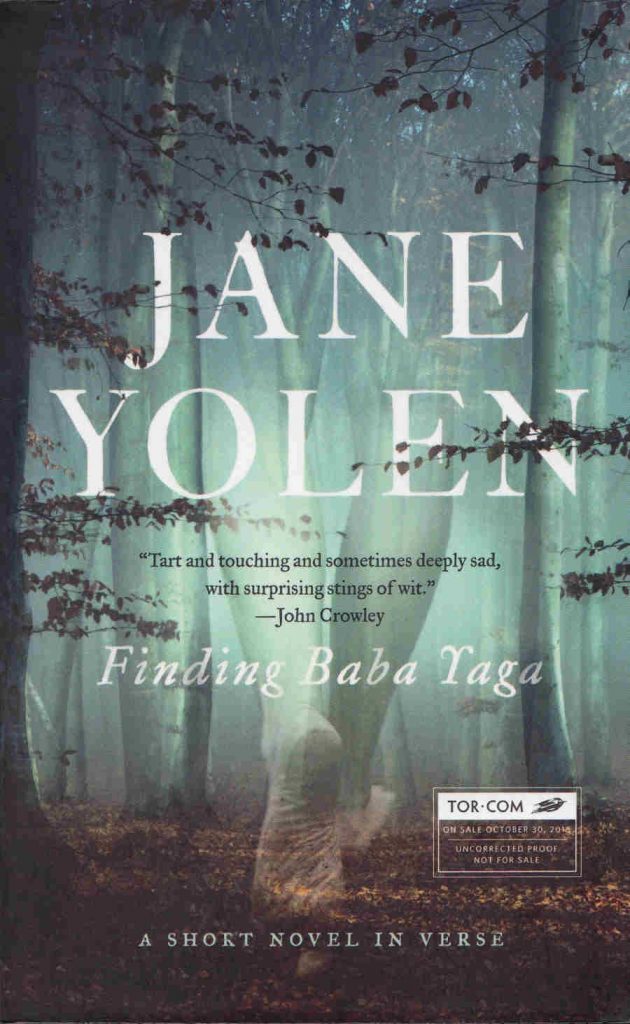 “So, this is a tale
Both old and new,
borrowed, narrowed,
broadened, deepened,
rethreaded, rewoven,
stitches uneven,
re-plastered, re-harled,
rehearsed, reworked
until it’s my own.

Love comes through a back door,
leaves by the front.
Not all baptisms occur at the font.
Witches are made, of blood and bone.
Witches are made, not only born.
A story is, not always means.
We pass on our genius
as well as our genes.

Our many cultures in our world are rich in folklore and myth, tales and characters that persist for generations, centuries, even outlast the millennia; passed down, by oral storytellers originally, later through the written word, later still radio, film, comics, online. They never go away, prove an endless spring of inspiration to creators of each age because the old stories that have endured the battering winds of the centuries without eroding speak, at their heart, of very human conditions, of love and hate, isolation and belonging, fear and hope, youth and age, ignorance and wisdom, cowardice and bravery, treachery and loyalty. These tales can feature trickster spider gods like Anansi, or brave but flawed heroes like Achilles or Gilgamesh; gods, heroes, villains, talking animals, magical creatures like dragons. But all of them, really, are about us, about people. It’s why they still fascinate us.

We denizens of the 21st century are no different in that respect from any of the people who went before us, from that writing explosion fueled by libraries and journals in the 19th century back to the medieval monk in a scriptorium working by candlelight, the storyteller sharing his tales by firelight at night as the caravan camps in its desert crossing (a tradition still honoured in some remote places), the wandering bards going from town to town to spin their tales to the Classical Greeks, right back to our ancestors painting tales on rock walls (again, not entirely gone, the Aboriginal people of Australia still honour this practise, telling stories and singing them to the land and the people).

Certain stories echo more frequently, prove truly flexible and adaptable to each new age, yet without losing their ancient roots, and that great figure of Russian and Eastern European folklore, the Baba Yaga with her iron teeth and chicken-leg house that wanders the forest is one of those. In very early versions of the Russian language her name can mean midwife. Or sometimes a seer or fortune teller, or a witch. Those multiple possible meanings nicely illustrate the complex nature of the Baba Yaga: sometimes she can be a kindly woman who helps a traveller, sometimes she is feared, flying through the air on her giant mortar and pestle, kidnapping children to devour. For others she is a protector of the wild nature of the land, or even a spiritual guardianr of the nation. 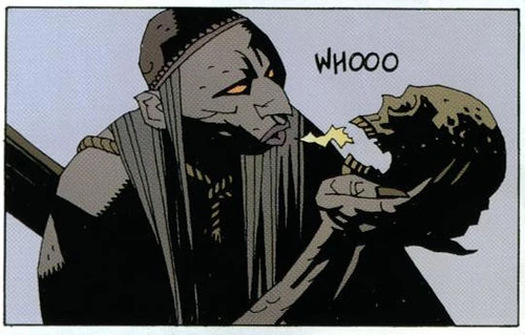 (Above:the Baba Yaga as depicted from the great Mike Mignola in Hellboy, published Dark Horse; below Ivan Bilibin’s 1902 illustration of the Baba Yaga) 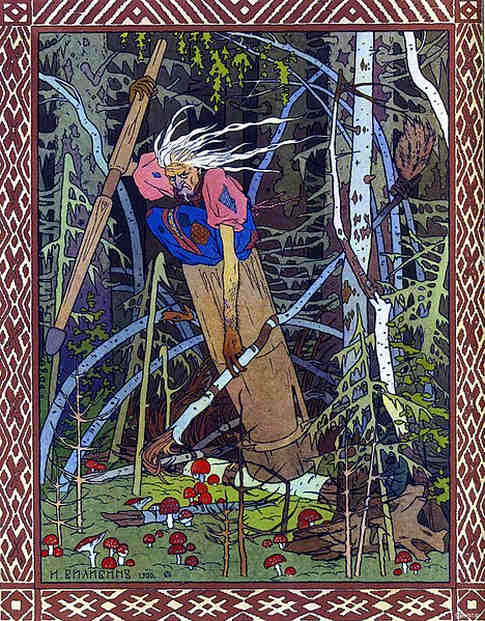 The prolific and highly gifted Jane Yolen gives us all those aspects of the Baba Yaga and more; she plays both with the mythic tropes and archetypes and yet at the same time she gives us a rounded, real character we can believe in, not just a mythic figure, but a person. This is no mean feat and takes dexterous writing skill; to do it in verse takes even more ability, and I can’t help but wonder if it added to the difficulty for her in penning this story. But it was a good decision: some stories simply work better in verse. I’m not sure why, they just do. I think poetry, sometimes, can touch our emotions and immerse the reader further into a feeling, a setting, than prose can (I often find when prose creates those feelings so well in me that it almost becomes lyrical, poetic). Poetry can be like jazz is to classical music, or magic to science, a different perspective on the world, on people.

In Finding Baba Yaga, Jane Yolen gives us Natasha, a young girl in a troubled home, running away, going into that place that so many of our old stories warn us about, into the deep, dark forest that still haunts our collective dreams, and it is there, after walking by the silver moonlight, that she will find that famous chicken-legged house and the iron-toothed old lady inside. Had she been a pretty young lad she’d have ended up in the pot, but, grumpily and yet acceptingly, almost as if she (and the house) knew she would come, the Baba Yaga lets her enter, lets her stay, and as their relationship forms the young woman comes to understand more of the world, of its stories, of her place in those stories, of her own past, her future, and her own being, her own power.

There’s a strong element of the feminine throughout the verses in Finding Baba Yaga; there are a few male figures, such as the handsome (and crafty) prince, but they are very much relegated to supporting characters, ornaments there to help the story unfold. It is the women here who are the important characters, and with the arrival of pretty Vasilisa they become, for a time, a trio, which again harkens back to myths, some older than Baba Yaga’s, the three women who are also one (think the Kindly Ones in Gaiman’s Sandman or Medusa and her sisters or a thousand other takes on this ancient belief of a trinity of womanhood). It also manages to weave some sly, often dark humour into the tale – the Baba Yaga remarking about her sister’s house made of gingerbread and candy and how impractical that Hansel and Gretel house actually is (bears eat parts of it), and how dirty it is inside because she can’t help herself, she always bundles her young help into the oven and eats them…

It is, quite simply, a beautiful, magical, immersive piece of storytelling. I was extremely fortunate to find that the regular science fiction evenings in Edinburgh that the Shoreline of Infinity journal team organise had Jane as a guest earlier in the summer, and months before the book came out she read some of it to us. Poetry is, I find, often best when read out loud, especially by the original writer, so this was an absolute delight to hear Jane reading from her tale in verse. In a nice bit of coincedental timing I had just received an advance copy a few days before that event; it’s rather nice when coincidence turns into a little spark of magic like that. 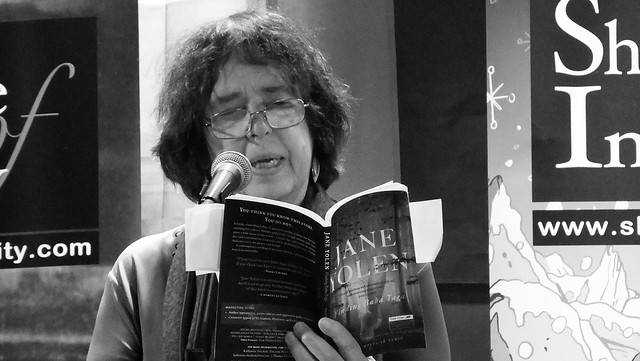 (Jane Yolen reading from Finding Baba Yaga at the Shoreline of Infinity’s regular Event Horizon evening in Edinburgh, photo from my Flickr)

This is another of the extremely welcome little novellas which Tor has been publishing over the last few years both physically and in digital form. We’ve reviewed quite a few on here, some by writers new to us, some by established favourites, but all a short but delightful dip into that writer’s world. I think Tor are to be commended for continuing to support and publish these novellas (which cover everything from hard sci-fi to fantasy to horror and even, as here, poetry); it’s a terrific way for readers to encounter new writing without the investment in time a larger book may require, and a good showcase for the writers (as are Tor’s regular short stories they post on their site). It’s also an ideal format for this unusual form of storytelling, of spinning a new take on the bones of old myth, a young woman’s journey seen through the magical power of poetry.

Plus Jane uses the word “widdershins” several times, which I find quite pleasing…

Finding Baba Yaga, a short story in verse, is published by Tor in October