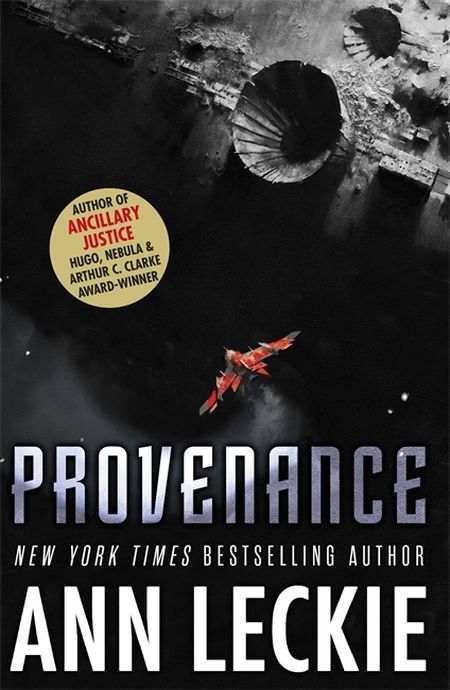 Ann Leckie’s Ancillary Justice seemed to come out of nowhere and conquered all before it, scooping the Arthur C Clarke, the Hugo and the Nebula awards among others, and for my own part it (and the following two books in her Radch trilogy) made my annual Best of the Year lists (in fact I recall Justice also made a few of our guest Best of the Year selections too, it impressed a lot of people). Her new novel, Provenance, is set in the same universe, but isn’t directly connected – it’s a different world and society (outside the imperialist Radch space), and different characters, and I think that was a wise move by the author, giving fans something fresh but at the same time also expanding the universe she has built previously.

Much of the events in Provenance rotate around or involve Ingray Aughskold, a young woman from a highly privileged, important and influential family on the world of Hwae. These kinds of mover and shaker families don’t operate just like a classic dynastic model though, they also frequently foster and adopt other children, raised to be part of the family and with them competing to be the one who will be named as the heir. In her case she suspects her brother is their mother’s favourite to inherit her name and title, he simply seems more devious and determined and scheming. Not terribly pleasant characteristics, but for the sort of political wheeling and dealing class, quite useful. And so at the opening we find Ingray, somewhat out of her depth, on a station in another system, where she has used all of her remaining resources to have someone secretly rescued from what is euphemistically called “compassionate removal” (essentially a prison planet where undesirables are dumped and have to fend for themselves).

Ingray’s world is obsessed with “vestiges”, historical artifacts and documents which are used to prove worthiness and rights, both on the personal level to the family history to the entire planetary society itself (not unknown in our own history, think of the supposed Wallace Sword in the Stirling monument, or Henry VIII’s Arthurian round table). The person she has had broken out of imprisonment, Pahlad Budrakim, also comes from a powerful family like her own (actually one her mother, the current Netano, has contested against for political office). And he was put away for stealing the family vestiges and replacing them with clever forgeries. Ingray’s plan to get Pahlad free, return to Hwae and find the never-recovered vestiges and present them to her mother as proof of her abilities is a bit desperate, even to herself, a last-ditch, all-or-nothing approach. So she is already filled with self-doubt as she embarks on this mission… And then when she finally gets Pahlad Budrakim delivered, removed from stasis, the person who emerges, despite looking like Pahlad Budrakim, claims not to be that person or even to know them. It seems her plan has fallen apart right at the first hurdle and all that remains to do is go home, broke and resigned to failure and the inevitable gloating of her brother.

Needless to say, this is not exactly how Provenance plays out, or it would be a very shot read. Instead Ingray finds that her travels and her scheme have brought her into wider plots, involving some of those she meets in her journey, her family, her planet and other powers. She will find herself again worrying about being out of her depth, of attempting to form plans in response to strange new turns of events, then finding her plans don’t always work and she’s going to have to have a wee panic but then settle down and think again. There’s actually something very pleasing about this – Ingray isn’t some superbly-gifted character, highly-trained and with capabilities normal people can only envy (the sort of character we see all too often), she’s a regular person, and a young one, inexperienced and learning as she goes. It’s as much a coming of age story as it is a mystery and conspiracy tale, and Ingray feels quite natural and believable, and increasingly likable as the story progresses.

In the Ancillary series the imperial Radch normally use the pronoun “she” for any citizen, they don’t differentiate in language between genders. Here in the Hwaen and other cultures which come into play here, Leckie expands that, with Hwaens using three gender pronouns, he, she and e, and eir instead of their, while different cultures also follow different naming conventions (much as some Earth cultures do – for example, not every culture follows the Western model of forename and surname in that order). My only problem with “e” is as a British person when I see “e opened the airlock” I can’t help but imagine it in a Cockeny or Yorkshire accent, or another which drops the “h”, which I imagine isn’t a problem American readers have. And this and with exposure to these other cultures, including the alien Geck and people from various walks of life, Provenance feels more rounded socially than the Ancillary trilogy – a part of that universe, of course, but showing us whole different parts of that universe, and hinting at more to explore. And that’s something we SF geeks do love, for sure, a good bit of world – or universe – building, and it expands that setting from the original trilogy nicely, widening that set for more future tales (I sincerely hope) set in that universe. An extremely satisfying and enjoyable read.