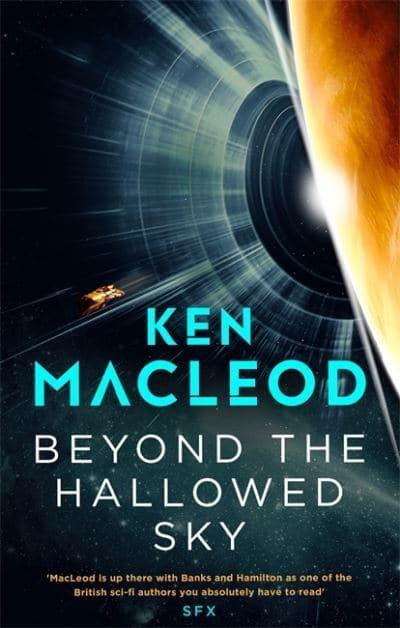 I’m always happy when there is a new Ken MacLeod book to be read; for my money he is one of the UK’s most consistently impressive and thought-provoking SF writers. In Beyond the Hallowed Sky we have not only a new book, but the start of a trilogy – the Lightspeed series. As that would suggest, this is a story in which the development of FTL (Faster Than Light) travel is fairly prominent. In the summer of 2067, Lakshmi Nayak receives an old-fashioned, physical letter, containing detailed mathematical proofs, which would seem to indicate that FTL travel is in fact possible. It seems to echo some thoughts she has already had but not fully formulated, but who was thinking not only on the same lines but ahead of her, and knows of her interest to contact her? Examining the letter the seemingly impossible explanation is that she sent it to herself – from the future…

After finally publishing the work, Lakshmi’s reputation is ruined by many of her peers; she eventually decides to take an offer to defect to the Union bloc and travels to Scotland, a member state, where after some Le Carre-esque spycraft in the middle of Edinburgh, the Union’s AI guides her around the spies of rival powers and to a job interview on the west coast. The job offer is genuine, but the AI has other reasons, not least the development of her FTL ideas into a workable engine for a starship.

This brings us to the Clyde Coast and John Grant, a “responsible” (a person who was seriously active and important in a previous revolution in the Union) and his comrades who run an engineering co-operative making ships on the Clyde. The AI guides them together to start a collaboration which could create the first FTL ship – rather pleasingly, Clyde-built, like the great ships of the previous two centuries of tradition on that great river.

But there’s more going on here – out for a coastal stroll John sees a submarine leaving the Faslane naval base – in this decade Scotland is no longer part of the UK, but an independent member of the Union. However, Westminster held onto the vital nuclear submarine base of Faslane as part of the deal, and shares it with their US allies. When John sees a submarine leave the base and sail out into open water it’s nothing unusual – until it seems to hover above the waves for a moment before vanishing in a shimmering haze. Most don’t believe him, the all-seeing AI carefully wipes his photographic evidence from his devices. Is it possible that FTL is not only possible, but other power blocs already have it?

MacLeod proceeds to gives us an expanding universe with three main arcs: our future Scotland and the small team trying to engineer their FTL ship (without the rival power blocs knowing), a Union science team on a floating base in the violent atmosphere of Venus, paying host to a visiting android who is also a spy for British Intelligence (which they are aware of, all sides are playing a version of The Great Game here), and a distant world around another star, reached by FTL, and the science teams operating there. Crossing all of this is a discovery that ties all three worlds together in a way that isn’t clear yet.

The multiple, overlapping story arcs work nicely to build up a three dimensional picture of this future society, dominated by three rival power blocs; as with a number of his previous works, MacLeod conjures up a believable socio-political structure, giving it just enough details that we can grasp the situation but not bogging it down with too much exposition, so the narrative flows at a good rate of knots. Along the way we get to consider various weighty topics, from the notions of political ideology and patriotism to the use and limits of AI in the human sphere, and the exploration/exploitation of other worlds. Looking forward to the second volume. 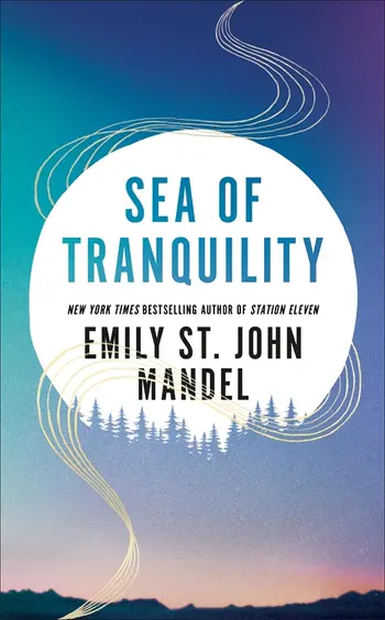 Mandel, who won huge acclaim and the prestigious Arthur C Clarke Award for Station Eleven (recently adapted into a TV series), returns with a fascinating take on the time travel tale. Taking us from the vast forests of British Columbia in 1912, where a young aristocrat, Edwin St. Andrew, has a strange, momentary audio-visual experience involving a glimpse of a building and violin music, a famous author, Olive Llewellyn, two centuries later, leaving her Lunar colony home for a book tour on Earth, with a new novel that includes a scene with a violin player in a huge airship terminal, but momentarily seeing huge trees, and further into the future, the unusually named Gaspery-Jacques Roberts (named by his mother for a character in Llewellyn’s novel), in an era where time travel exists but is understandably tightly controlled. Gaspery-Jacques is tasked with investigating a potential anomaly in different time periods, an anomaly involving violin music…

Mandel takes us chronologically through these different lives in different periods, introducing us to the different characters, giving us a glimpse of their lives, their worlds, and then deftly drawing them together, through the anomaly. Is it just a weird coincidence linking these disparate lives and time periods, or is there an actual fault in time itself – and if so, is it naturally occurring or the result of human interference? Or… could it be something else again? Gasper-Jacques’s sister, a physicist with the Time Institute has an interest in Simulation Theory, the idea that what we assume is the real universe around us is in fact an advanced computer simulation, that we are, in effect, all living in the Matrix. And perhaps this anomaly is a glitch in the Matrix?

The narrative manages to be both chronological yet circular, exploring the nature of this potential anomaly; I really am wary of saying too much because I don’t want to spoil it, and with all three segments being so interrelated it’s impossible to talk about certain events without massive spoilers. Suffice to say I found Mandel handled this rotation through the timelines and the various people in a very satisfying manner. The book also raises a lot of interesting questions – for instance, the few licensed to go back in time have a strict non-interference policy, like the temporal Prime Directive in Star Trek. Very sensible you may well think, protect the integrity of the timeline – after all, we can’t know what even minor alterations could have on the unfolding centuries of events that follow.

But, as Gaspery-Jacques is told in his training, when they visit a period, they know everything about most of the people they will encounter, their entire biographies. He could meet people at a party, for example, and know that one woman he is chatting to so amiably is destined to die soon, and not in an unavoidable way such as a fatal disease, but by a simple accident. Despite knowing this he absolutely could not tell her to avoid driving on that particular road next week. As his sister tells him, you effectively have to shut down your empathic, human side and remain totally detached; easier said than done. The issues raised by the possibility of Simulation Theory are likewise fascinating in their philosophical ramifications (I was reminded of the compelling documentary A Glitch in the Matrix which came out last year and explored this in some depth), both to the Big Questions of Life, The Universe And Everything, and the smaller, personal, individual elements (what would this mean for our lives, the lives of those we love?).

I can see this being a cracking read to do for my long-running book group, there’s a lot of questions and moral quandaries raised here that would be perfect for book group discussion material! Thought-provoking and very satisfying reading, I raced through this and couldn’t stop.

Sea of Tranquility is published late April 2022 by Picador