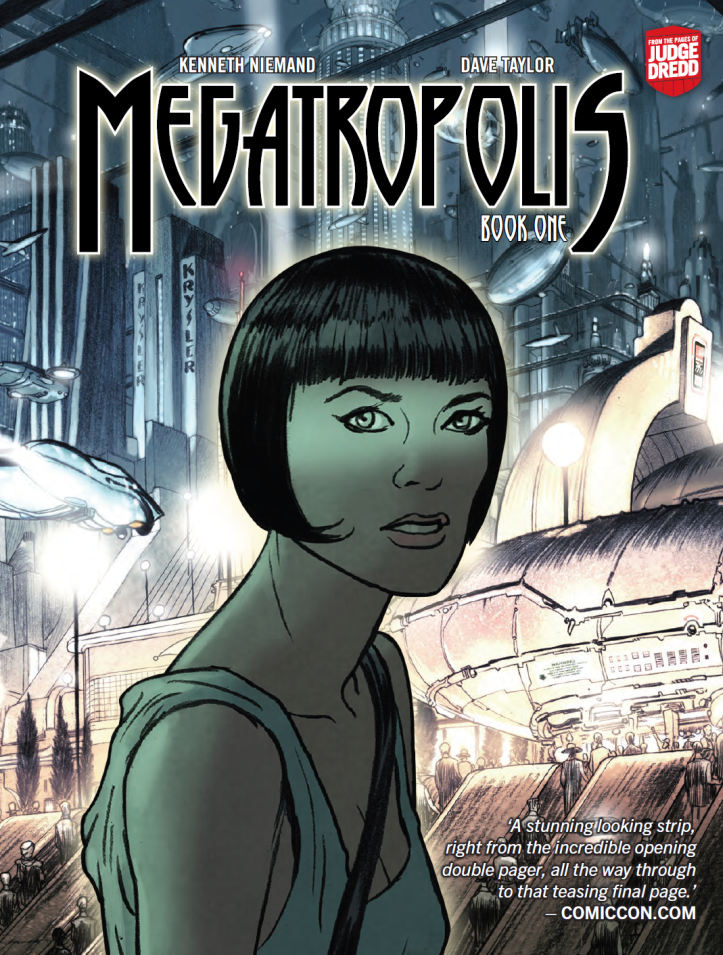 The “What If?” approach is, of course, not new in comics – indeed Mighty Marvel have had their “What If?” comics for years (with them also recently making the jump to an animated TV series), while DC have long had their Elseworlds. Over the decades these have freed creators to reimagine stand-alone tales featuring famous characters and setting in a new way – what if Agent Carter was the one to be given the Super Soldier serum? What if the Batman was actually a real creature of the night, a vampire? It’s a chance to let imaginations fly, unencumbered by the normal continuity issues of ongoing series.

Originally serialised in the Megazine, issues 424 -431, Megatropolis takes that opportunity to reimagine a well-known series – in this case the world of Judge Dredd, arguably Britain’s biggest comics character – and puts it into visually dazzling, sumptuous, Art Deco inspired alternative reality that’s as infused by the legacy of Lang’s 1920s classic film Metropolis (as you might infer from the title) as it is those fabulous 1930s and 1940s Hollywood Noir films, or the works of Dashiel Hammett and Raymond Chandler, and a dash of Batman’s Gotham and Superman’s Metropolis. 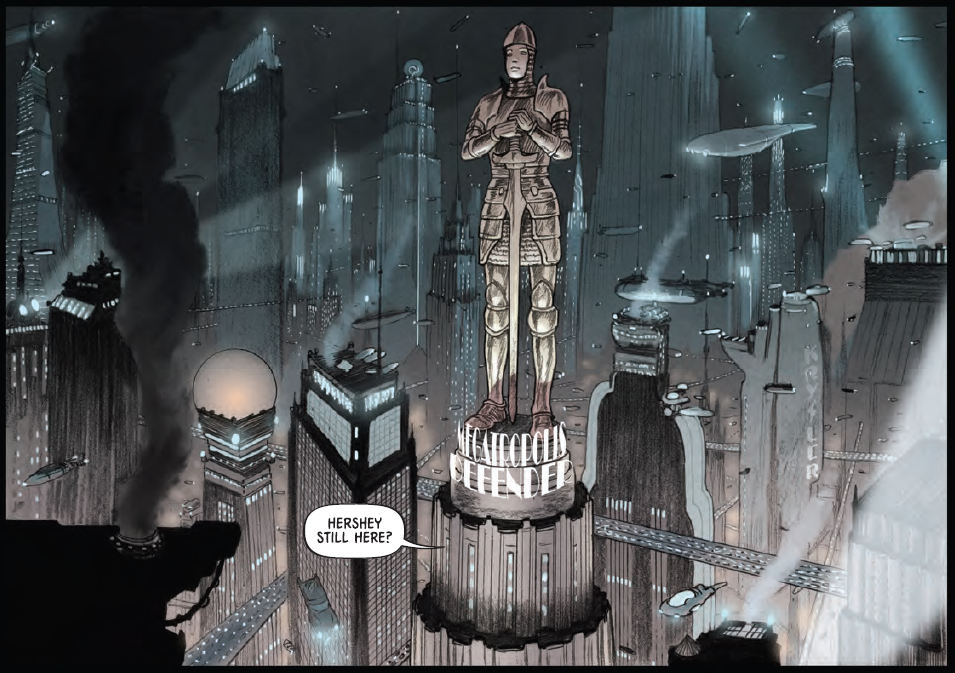 Rookie cop with a cloud over her career (taking the rap for something that didn’t actually happen the way it has been made to look) Amy Jara is transferred to a new beat and partnered with Detective Joe Rico, perhaps the only badge in the precinct not on the take from the rich and powerful figures in this glittering but corrupt city. Attempting to investigate a growing string of hits on figures, both society, underworld and even police department targets, Rico knows they are linked to the corruption that permeates every level of the city like a cancer, but special departments inside the police, headed by Captain Calhoun with his sidekicks Quincy and Slocum (yes, look at that blonde hair and arrogant approach, it is indeed a version of Judge Cal and his SJS) are doing their best to head Rico and Jara away from their investigations.

However, they’re not entirely on their own – District Attorney McGruder is leading a crusade to clean up the city, and also gunning for the likes of Mayor Bob Booth (yes, “Smooth Booth”, here drawn with something of the Richard Nixon about him), and investigative journalist Bernice Hershey from the Defender is out to open the lid on the sordid secrets of the top members of Megatropolis society (Hershey, still sports her trademark Louise Brooks bob haircut as she does in the regular Dreddverse, and unsurprisingly it fits very well into the Art Deco version). 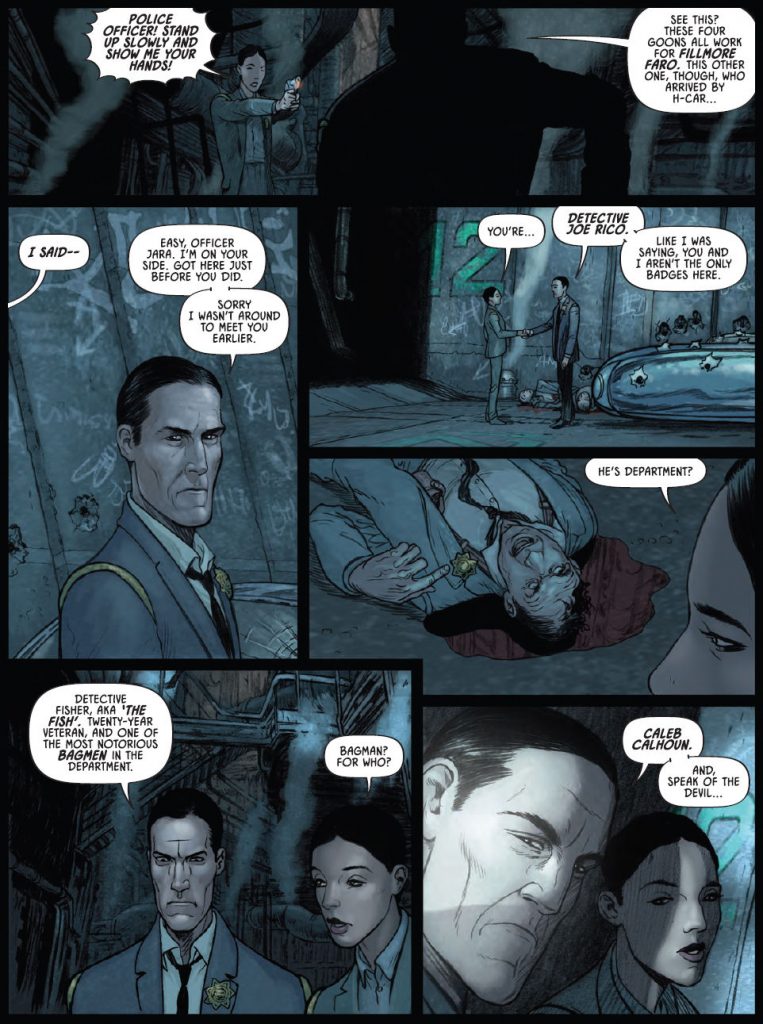 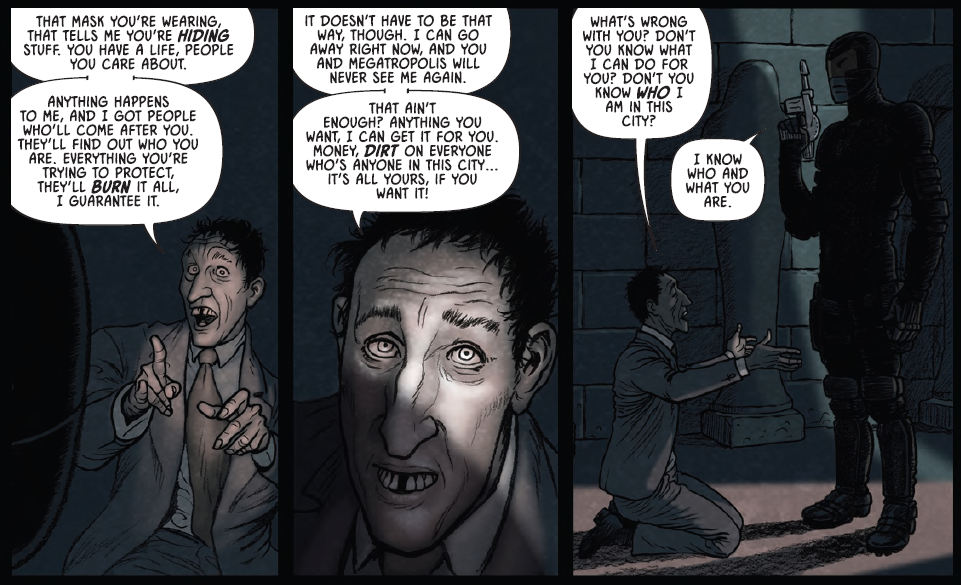 (is it just me, or does this version of Filmore Faro have a passing resemblance to Ken Dodd?)

There are many other alternate versions of Mega City One characters, from the small to the major players, and while part of the fun is seeing those connections, if you’re not overly familiar with the four and a half decades of Dredd history (although I would guess most of those reading this will be Dredd fans already), it will not harm your reading or enjoyment of the story at all, in much the same way you can enjoy the Marvel movies without having read all the relevant comics, for example (but if you have then naturally there’s a whole other level of Easter Eggs and references for you to enjoy spotting, such as a barman called Murph running a pub called The Tight Brogues).

And what of Old Stoneyface himself? Where does his alternative fit into this strange, 1920s/30s infused take on The Big Meg? Perhaps rather fittingly the Dredd analogue here is only seen mostly in small bursts, in the dark shadows, striking out at corrupt police and politicians and businessmen (our first glimpse is simply a gauntleted hand clutching a very familiar firearm). As his surgical strikes on the cancerous corruption in the city mount, this shadowy figure dispensing his own brand of justice earns the nickname “Dredd” because of the fear he instils on the wicked who have had their own way for so long with the town. But who is he? Where does he come from, who is supporting him? Is he linked to the reclusive Fargo, the father of the city who now hides away in his secretive estate? 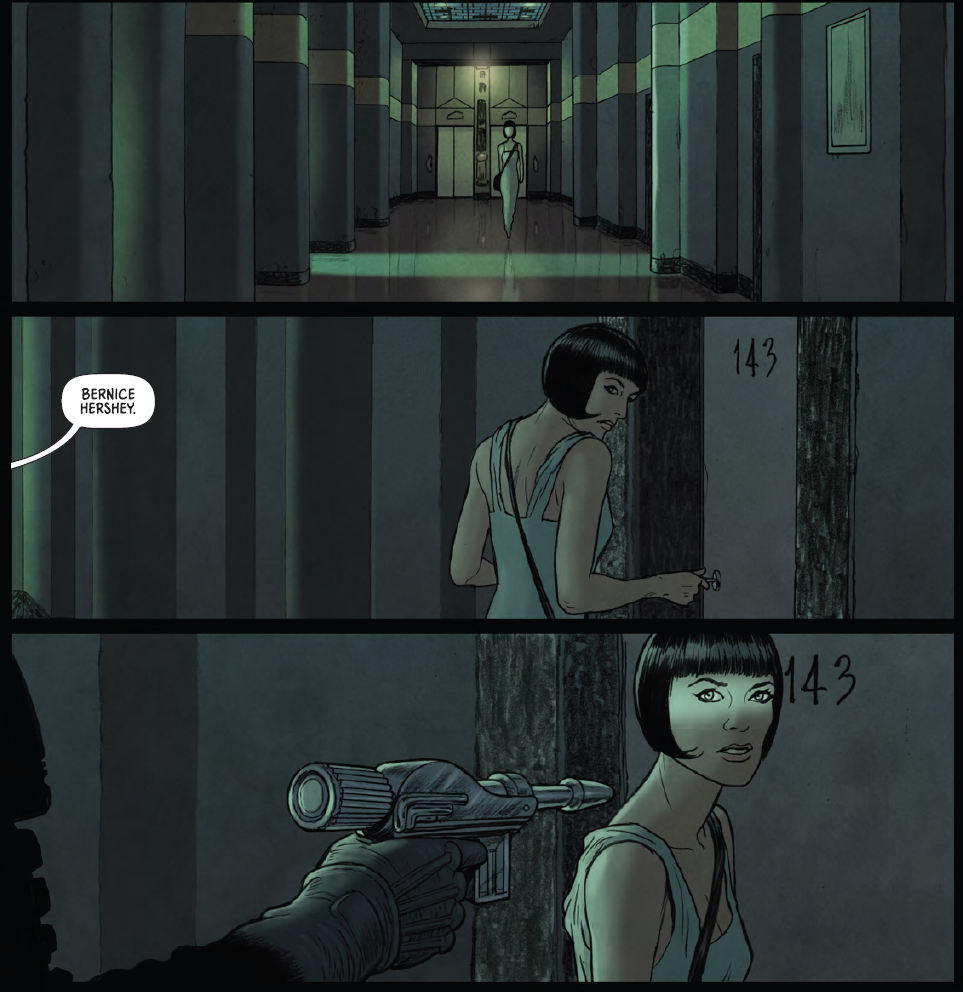 I shall say no more – there’s murder and mystery here, and I don’t want to spoil it for you. Suffice to say there’s plenty to sink your teeth into here – occasionally some “What If” stories are too slight, the idea fine in itself but the story not enough to hold up on its own without the concept of the alternative world idea. Not so here, Niemand and Taylor are too experienced for that; yes they want to play with the alternate worlds and versions ideas, but they also know the story and characters also have to be powerful enough to work in their own right, and they do.

And then of course there is just the simple pleasure of the sheer visual spectacle on offer here. Let’s be honest, we’ve all had comics we’ve loved for story and character, but also sometimes the art is just so damned wonderful we find ourselves pausing the reading to drink in details, or go back over some pages to feast on the visual banquet. P Craig Russell’s “Ramadan” story in the Sandman, Bryan Talbot’s Grandville series, Colin MacNeil’s artwork in Judge Dredd: America, or Schuiten’s art in Les Cités obscures all spring to mind as examples where I’ve found myself going over pages again to savour the artwork, and now I am adding Dave Taylor’s depictions of Megatropolis to that roster (and why not? Comics is a visual medium, after all, I see no shame in celebrating outstanding visuals).

Megatropolis is a visually stunning piece of comics work, yes, but it has the character and storylines to back up those elegant, Art Deco themed visuals too, and clearly delights in drawing as much on those 1930s/40s Noir tropes as it does the science fictional elements. A beautiful piece of comics work.

This review was originally penned for Down The Tubes