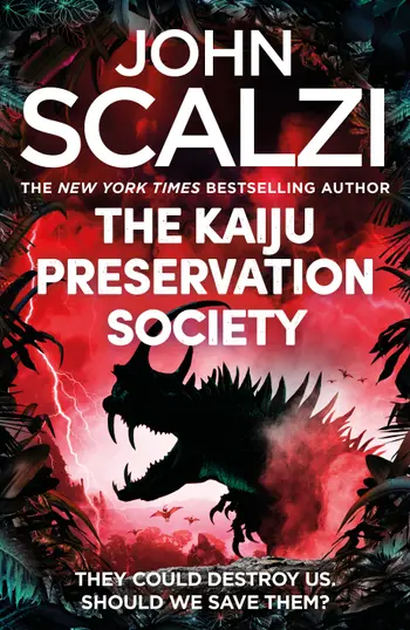 Jamie (whose gender is never explicitly mentioned) has put up with corporate nonsense and an entitled trust-fund owner of the tech start-up they are working at, to try and get ahead, only to find themselves laid off, right as the Covid nightmare is manifesting and Lockdown beckons. The only job they can find is delivering food during the Lockdown, and in a bitter irony for a company that her former tech company did the software for. Depressing as this is, it does lead to the happy accident of delivering to someone – Tom – who turns out to be someone they vaguely know, a friend of a friend sort of thing. And on hearing of Jamie’s recent employment woes, Tom reveals the animal protection charity he works for has been left short-handed at the last minute and he’d much rather have someone he knows if he can manage it.

Tom can’t tell her the full details, it is all very secretive, but it involves working with “large animals”, Jamie’s work would mostly be grunt work of helping move stuff and help out the science and tech teams, and the remuneration package is superb. Grabbing this offer, Jamie is soon given numerous shots for various diseases – including an early form of the Covid vaccine, not yet out to the public – and bundled off with a team of returning staff and some other new recruits to an airbase in Greenland.

The destination seems puzzling – what large animals are they working with here? But Greenland is just a way-point – from here they take a special portal, one of just a handful secreted around the globe, to, well, Earth. Except this is a parallel Earth, one where giant monsters, the eponymous Kaiju – are the dominant species. It transpires there are indeed numerous parallel worlds to our reality, but this is the only one we’ve been able to access, and only since the Atomic Age: nuclear energy, especially large-scale explosions, thins the walls between the worlds for a while. In fact one 1950s A-bomb test in the Pacific brought over a Kaiju looking for a radioactive snack, only to encounter the US Navy (yes, in this world the inspiration for Godzilla were the stories that leaked of this Kaiju incursion!).

In Scalzi’s world one of the reasons the atomic test ban treaties were agreed by world powers was not just for safety in our world, but to prevent more of these enormous creatures coming through – imagine if one entered our world near a major city. Of course only a few people know the reality behind this – the organisation, a number of senior members of world governments, and a few big corporate heads who also donate to the budget for operations (nice parallel to the billionaires having their rocket-measuring competitions at the moment, and yes these CEOs are just as big a bunch of numpties as you’d expect).

While bad things can and do happen to good people, for the most part this is a joyful romp of a book – it’s laced with a lot of humour (which will not surprise many Scalzi regulars), and the main characters (and even most of the supporting cast) are immensely likeable and indeed, loveable. Actually I came away from this with the sort of warm feelings for the characters as I have from Becky Chambers’s wonderful books, while Scalzi also works in some sound ecological themes and the sheer sense of wonder at such creatures really existing.

In an afterword, Scalzi reveals this was not the book he was originally writing; he was partway through something far darker when Covid hit. Lockdown, then falling ill himself, then a computer failure eating several thousand words of the work in progress, and he realised he just couldn’t finish it. Tor was understanding – it has been a weird two years for everyone – and with the weight of that book lifted from him, the Kaiju story popped into his head, and he wrote it swiftly, offering up instead of that grim, dark tale, something full of wonder and joy and humour. I don’t think I realised how much I needed this book, it left me content and smiling. An utter delight.

This review was originally penned for The Shoreline of Infinity, Scotland’s premiere journal of new science fiction.