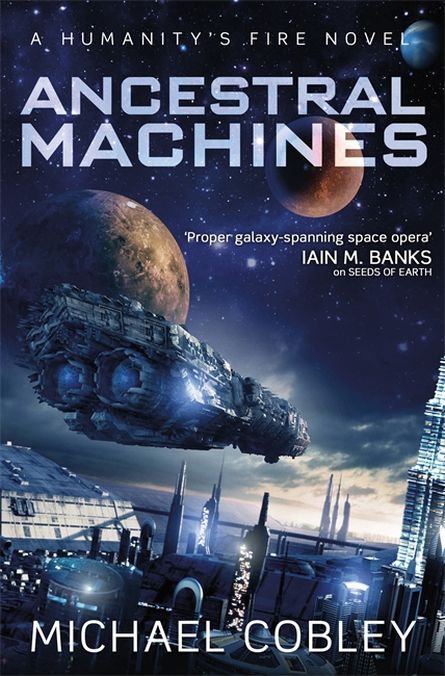 A few years ago Mike Cobley moved from his popular fantasy series to science fiction, with his hugely enjoyable Humanity’s Fire trilogy, centred around a lost colony world (settled mostly by Scots and Norwegian colonists) being rediscovered, only to be brought into the middle of galactic politics and power-plays they didn’t even know existed until contact with the Earthsphere was re-established. Over the course of the trilogy Mike gleefully indulged himself in some fine world-building, both on his lost colony planet and then a wider galactic canvas. Ancestral Machines is set in the same universe as Humanity’s Fire, but it is a standalone novel, and while those of us who enjoyed the heck out of the original trilogy will welcome this return to that setting, I think it establishes itself and its setting so well that you can still enjoy this even if you haven’t read the trilogy (and you will probably find afterwards you will want to seek those out!).

Brannan Pyke is a pleasingly irascible scoundrel from Cobley’s Scots-Norwegian colony world, now master of the Scarbarus, with a motley collection of crewmembers from various worlds, taking on legal and, well, slightly less above board jobs to make ends meet, now that their world is connected into that larger universe again. There’s more than a hint of Joss Whedon’s much-loved (and cut far too damned short) Firefly here, I was thinking as I read it, then found Mike actually referencing Firefly in his afterword. There are other influences visible here, notably from fellow Scots-based SF writers like Ken MacLeod and the late Iain M Banks, and readers who have enjoyed those authors will find much to enjoy here. Which is not to say this is slavishly following those other creators, Mike’s too good for that, he takes his influences but the characters, setting and compelling narrative are very much his style.

After a shady deal goes wrong Pyke and his crew wake up in their de-powered ship, their partners having left them to die and make it look like an accident with power and life support. Understandably angry they try to pursue the double-crossing former partners, little knowing that a smuggling deal gone wrong is about to lead them straight into a situation they could never have imagined, and a desperate struggle, as they are dragged into the Warcage, an unbelievably vast series of worlds, all connected by ancient technology, around an artificial star, travelling into our galaxy, built by creators so ancient and distant that even the AIs of the Construct, who monitor the galaxy from various tiers of hyperspace, had thought this travelling group of worlds to be a myth. Originally conceived as a utopia, creating harmony, it was long ago usurped by those who saw it as a tool for power; instead of harmony between various worlds now the various races all train in martial arts, competing in regular deadly tournaments to keep their skills sharp (and to ensure they are always going to have grudges against the other species, therefore unlikely to combine to take control).

All of this is overseen by a group of five cold, violent, loathsome beings, the Gun-Lords, so called because they are a hybrid of an organic host with a quasi-organic-machine parasite, which also includes a sentient weapon arm on the host body. These vicious beings took control of those harmonious worlds and turned them into the dreadful Warcage, and now it’s moving towards out part of the galaxy. The Construct and Earthsphere Intelligence are concerned and plan a covert mission to investigate, little knowing the human Pyke and his crew have already been drawn into this struggle and that their paths will cross.

This is an absolute cracker of a space opera, fast-paced despite being over 400 pages, with both the personal level – Pyke and his crewmates desperately trying to save themselves and also being inexorably drawn into a greater struggle – and the large scale (entire planets destroyed, the misuse of power and how tyrants craft their vile states and hold onto power through a mix of lies and violence, an origin going back millennia), the larger scale exciting the imagination, the personal scale keeping it nicely relatable, which characters we genuinely care about.