On my Twitter feed I often have a look through my huge Flickr archive of photos to see if I took any photos on this day in previous years, and tweet a few of them. Today I noticed the ones I took on 21st March 2020, a year ago today. I was coming home from visiting a friend on the other side of town; we both knew the Lockdown was coming very soon (it was announced just a couple of days later) and this might be our last chance for a visit for a good while (we had no idea then just quite how long, of course, none of us did, we were all still thinking a few weeks, a couple of months perhaps). 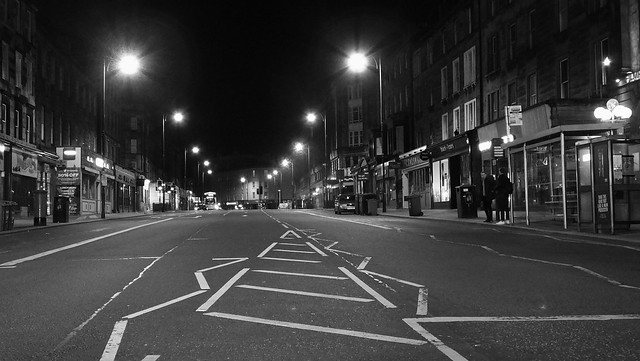 It was around ten or eleven on a Saturday night as I crossed Lothian Road near the Filmhouse. This area is full of restaurants, bars, cinemas and theatres, and so you can imagine on a Saturday evening it is extremely loud and busy. And here it was all but deserted, a couple waiting for a bus and that was it. The Lockdown hadn’t quite started, but the bars, restaurants, cinemas and theatres had all already closed; continental Europe was being ravaged by Covid-19 and cases were climbing alarmingly here. People were scared, streets were empty, places closing; the storm was about to break over us. 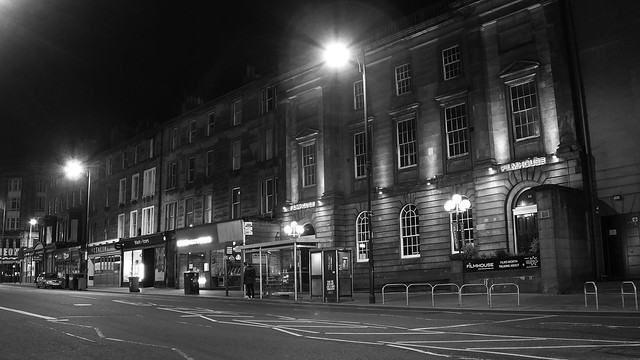 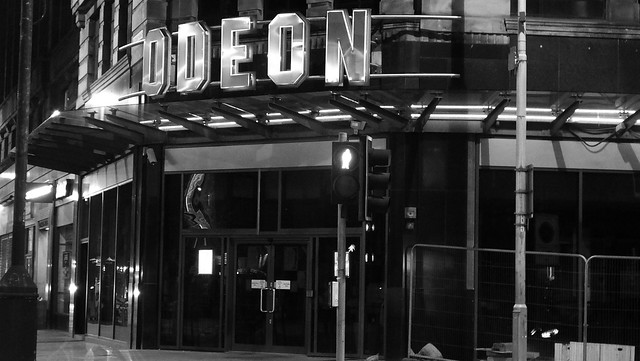 It was disturbing to see my city so empty of people on a Saturday night; it was just a preview of what was coming over the next few months. Lockdown hit two days later, we left our bookshop wondering when we would be back, when we would see one another again, when we would be able to see our friends and family again now everything was closed and travel not allowed. We were thinking some weeks, perhaps a couple of months, nobody had any idea just how bad it would be and how long it would keep going for. Over the next few months on furlough I walked the streets of my beloved Edinburgh, and as always my camera went where I did, documenting this strangest time in the city. 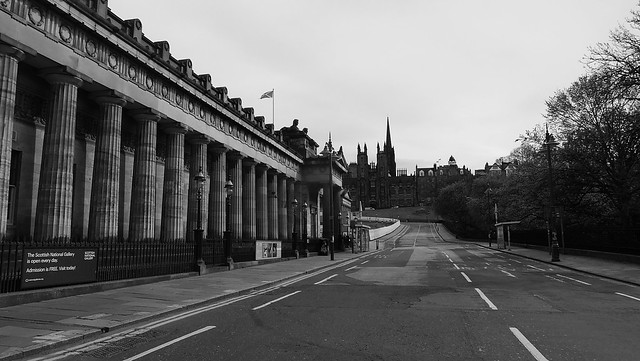 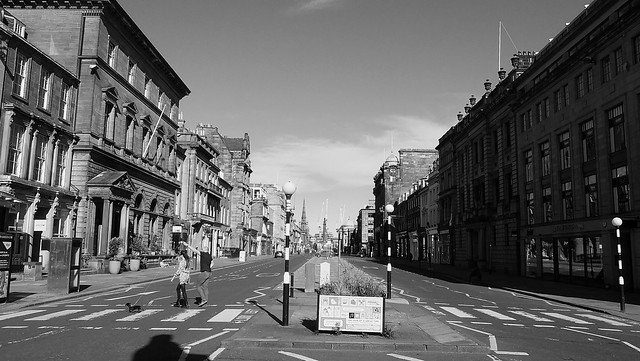 On a sunny Easter bank holiday weekend, when the city should have been bursting at the seams with tourists I could stand in the middle of the Royal Mile, devoid of people and traffic, to take pictures, I saw perhaps three or four people on the Esplanade in front of the Castle where normally it would be packed with tourists. It was beyond disturbing, unsettling to walk around this magnificent, old city and see hardly a soul, the very occasional bus going by almost empty. Sounds like the footsteps of the postie delivering mail became a source of reassurance, that some normality still existed. I could hear the music from 28 Days later in my head as I walked through utterly empty Old Town streets, my city, like others all round the entire world, was a ghost town. I’ve seen more people around the town at 4am walking home from the film festival than I did on those strange, spring days…

As I write this a year on we’re still in a second Lockdown after another wave of infections, although the vaccine roll out is giving some hope, and restrictions should slowly ease next month. But in Europe many are experiencing a third wave of infection and the worry is that we may too (as spring weather returned last week I saw large groups of students gathering in the Meadows, flagrantly breaking the Covid restrictions on numbers and distancing, which fills me with anxiety as this is the sort of thing that can lead to more spikes in cases).

We’re now in a very strange mix of fear and hope; it must be a cousin to the strange morass of conflicting feelings those who endured the last war felt. I want to do normal things again. I want to hang out with my friends. I want to sit in a cinema, a pub. I want to be able to go home and see my dad. And we’re all in the same boat. 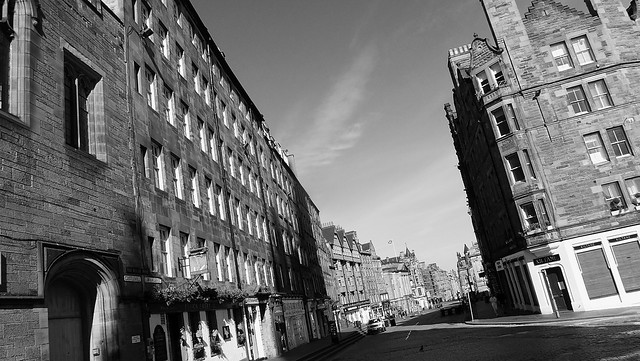 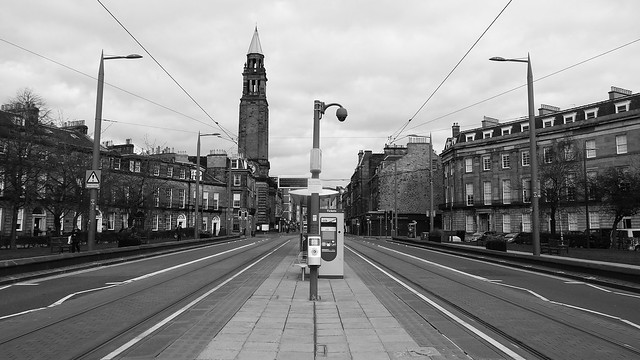 Please keep washing your hands and wear a mask and distance. And don’t dare tell me that doing that infringes your “freedom”. It doesn’t, this isn’t about you and your selfish needs if you think that way, this is about trying to protect everyone around us, our friends, families and communities: you wear a mask to help protect everyone around you; do your bit. We will get through it. 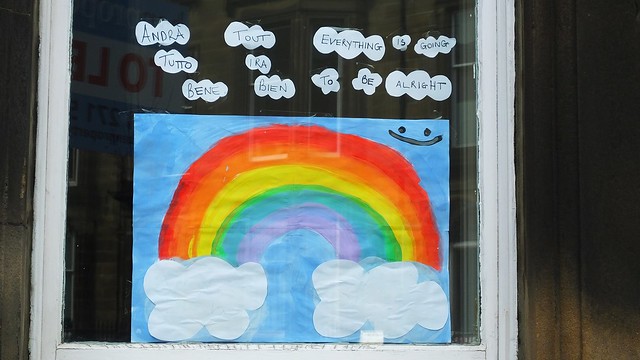 Looking back through my ever-expanding Flickr uploads (now approaching 22, 000 photos), as usual around this time of year I am picking out some of my favourite photos I snapped this year. Of course I didn’t realise that I would spend so many long, long months in Lockdown, walking alone through almost empty streets of my city. I’ve always enjoyed trying to document life and events through the lens, but in this year of Covid and enforced isolation the camera became part of my coping mechanism for the tedious days after days of Lockdown and Furlough, allowed out the house just once a day, everywhere closed, so few people to see and when you did you all tried to keep your distance (and the even longer months of not being able to see family and friends).

Of course I still documented it – from empty streets in Edinburgh’s Old Town (so disturbing – in a city suffering an overload of tourism, suddenly we were deserted, the Castle Esplanade, Grassmarket, Royal Mile on a sunny Easter holiday weekend, barely a soul to be seen), to exhausted cycle couriers (often the main part of the now limited road traffic during the Lockdown months) to masked and socially distancing people. It was all upsetting, disturbing, depressing, stressful, frightening, and the fact we were all so isolated made it harder to deal with, so again the photography helped me process it.