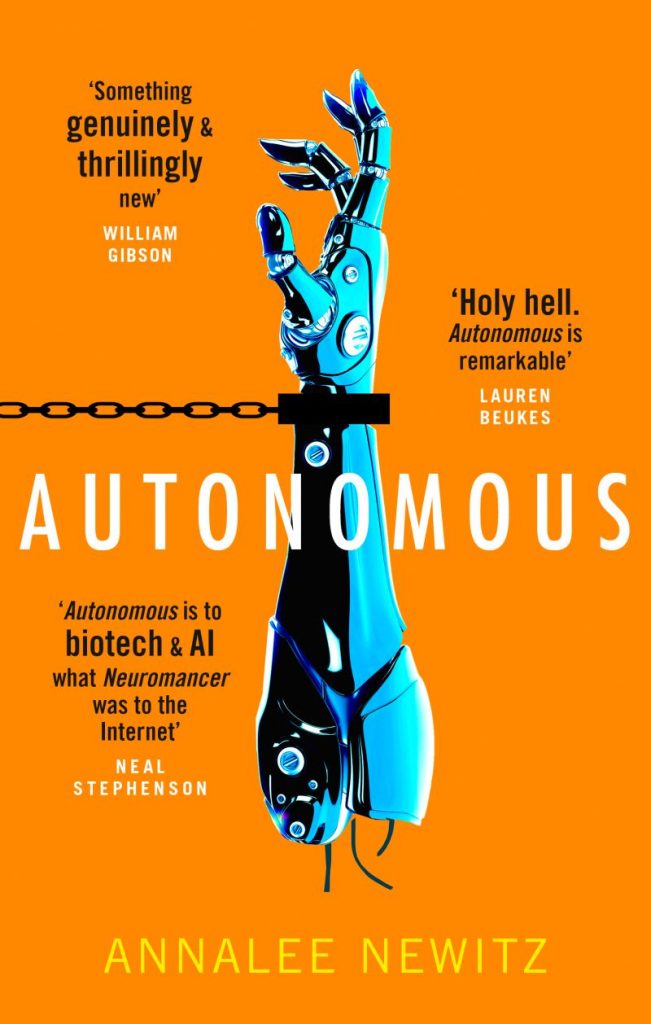 (cover design by Will Staehl)

I’m sure many of you are familiar with Annelee Newitz’s name, being the co-founder of the major SF site IO9 among many other hats she wears. To that hatstand we can now add science fiction novelist with this, her debut from Orbit Books. An oh boy, what a fabulous debut. Robots, love, sex, pirates, copyfighters sticking it to giant mega corporations, shady morality and a future that’s drawn partly from the present and history, making elements of it sadly all too plausible. All of this wrapped up in a very well-paced narrative with flawed characters who work their way into your affections, flaws and all (perhaps more so because of their flaws).

Jack is a highly trained scientist with a lifelong hatred for the big megacorporations, especially big pharmaceuticals. In her younger days she and others pushed for free labs and works being published without copyrights, freely available to anyone to make themselves when needed, or for other scientists to take and twist and alter and enhance. It’s a stance which attracts a lot of other like-minded people and, predictably, the ire of these giant corporations, which use their agents to crush them and make an example of them, seemingly above the law around the world, able to get people imprisoned, or use coercion and violence on those who oppose them, and get away with it while authorities, hungry for the funds that can come with working with those big corporations, look the other way.

It’s a life which instead of cowing Jack has pushed her further into her beliefs – she’s become a pirate, hacking the drugs produced by these megacorps, which make obscene amounts of money and make drugs and therapies which only the well-off can afford. She hacks these, breaks them down and then makes her own versions which are distributed to a black market among various medical staff; it makes her a living (albeit one that gets her hunted) and at the same time people who couldn’t possibly afford those medications are able to get hold of them cheaply.

Except now, as her submarine nears the coast for a new drop, she is hearing news of multiple cases of problems with a drug, one she fears she sold – she checks, her work is good, but the original company’s drug she hacked has a serious flaw (or is it deliberate?), it is highly addictive. Her mission to do good has gone wrong in spectacular, if unintentional, fashion and she is going to need help to fix it. Worse, as this will draw the copyright agents closer to her – not motivated to make sure not only that her pirating is stopped but no news of their dodgy chemistry makes the news – she is going to be running from hiding spot to hiding spot to try and fix it while looking over her shoulder, and knowing she is potentially putting everyone she deals with in danger.

This is an absolute cracker of a debut – it runs along at a fine pace, keeping you glued to it. Where some may give you good heroic characters and their villainous counterparts, Newitz instead gives a much more satisfying mix of flawed characters – many of those on the “sticking it to The Man” side of things are not all entirely clean, and they are, basically criminals (even if some do it for a greater good – at least they think they do), while the agent hunting them, Eliasz, and his robotic companion Paladin, commit morally horrible acts to try and deal with some of those they are hunting, and yet neither is really a villain as such, they think they are doing the right thing, upholding rules and laws, stopping criminals, and there is a strange relationship forming between man and machine which starts as somewhat disturbing but soon becomes actually rather sweet.

It’s a disturbing future drawing on a lot of elements from our current world and our shared history, which makes it all the more terrifyingly plausible. Not only robots are indentured for years (earning their autonomy from those who created them by working off that debt), huge swathes of humanity are similarly indentured, recalling the way more than a few colonists came to the New World back in Colonial-era America, with no resources other than their own labour, selling themselves into an indentured contract, and with the erosion of worker’s rights to suit giant corporations (which have more power than national governments) it’s not hard to imagine a form of that being tried again. The hacking and pirating of chemicals and treatments from giant companies is something we have seen already – think of those Brazilian companies in the 80s and 90s making their own generic versions of big pharma companies’ AIDS drugs, illegal, sure, but on the other hand it made those drugs available to thousands who needed them and couldn’t afford them. That sort of moral ambiguity is laced throughout the book and makes it all the more engrossing. A must-read.