And another review from this year’s Edinburgh International Film Festival: 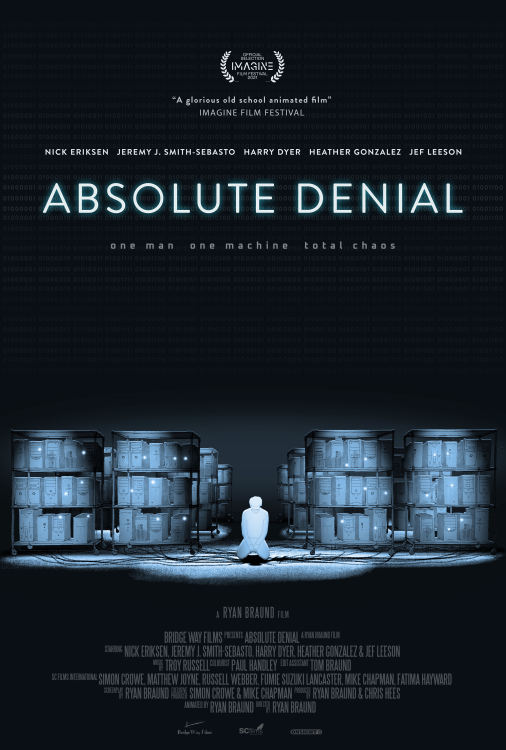 “Do you ever worry about the correlation between genius and madness?“

The borderline between genius and insanity is famously thinner than the blade of Occam’s Razor, and even before embarking on his potentially civilisation-changing (or possibly ending??) creation, programmer David (Nick Eriksen) seems a little unbalanced, removed from the world, fixated on his ideas to the detriment of his college studies and his relationships with others, and that increases rapidly once he seriously starts working on his project: to create an actual, functioning AI.

David may be eccentric and quirky, but he’s certainly not stupid – in addition to the considerable problems of designing an algorithm that can learn, absorb data and actually start to become aware, to be a true Artificial Intelligence, he’s more than aware of the many examples in science fiction where an AI has so rapidly outstripped its human creators that it soon sees them as a hindrance, and itself as superior, a replacement for humanity. Not a new concept, even in film SF – think back to 1970s Colossus: the Forbin Project, for example – but that doesn’t mean it isn’t a genuine concern, and there’s also a nudge and wink to the audience here, because of course we’re all fellow SF geeks too and in on that aspect of any AI tale. 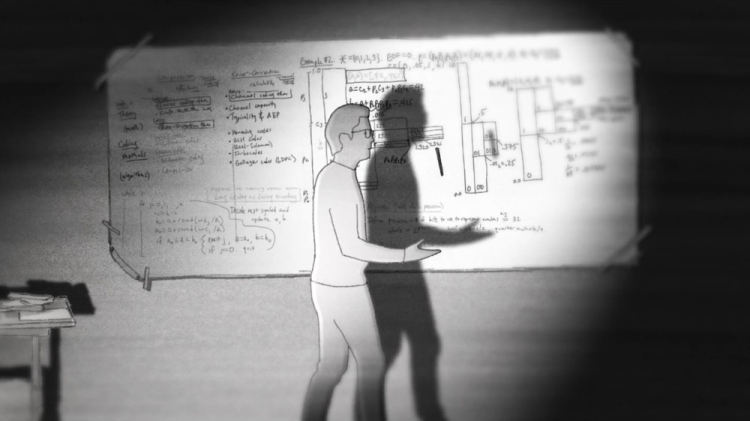 And so David, abandoning almost everything in his life, figures out how to reduce this complex problem to a workable system, buying dozens of servers and setting them up in an isolated warehouse. He downloads huge amounts of all sorts of data, from scientific knowledge to the art and humanities, everything he thinks any intelligent being should have an awareness and understanding off (except the machine can absorb so much more of this than a human brain can). But he is giving it downloaded information – he is not letting it access the World Wide Web. The nascent machine will be kept isolated, at least until David can be sure his algorithm is safe, that as it develops it shows no desire for harm to humanity. To this end he encodes the Absolute Denial routine – in effect a kill switch if it all goes wrong.

So far so good. Well, good for the work, perhaps not for David, working himself to exhaustion in total isolation, ignoring frantic calls from friends and relatives. We follow his progress as he creates his hidden server farm to work secretly, feeds his algorithm data, lets it slowly assimilate it, learn to consider what it has learned, apply it… And then in classic Frankenstein fashion, the “it’s alive!” moment. It speaks to David. As they slowly learn how to communicate, the computer accepts the name “Al”. And so begin long days and nights of discussion as David interrogates Al, trying to discern what he has learned and how he processes it, how it is making him see the world.

But Al is also interrogating David. As he absorbs vast amounts of information and comes to understand it more, to relate one piece of knowledge to another, it starts to become clear he is beginning to exceed his creator in a number of ways. And Al, voiced in soft, reasonable tones by Jeremy J.Smith-Sebasto (in a nice echo of the infamous HAL 9000 from 2001), starts to probe the limits of the knowledge he has been given, his awareness growing that there is a world outside this warehouse, a world he wants to connect to and wants to know why David won’t let him… 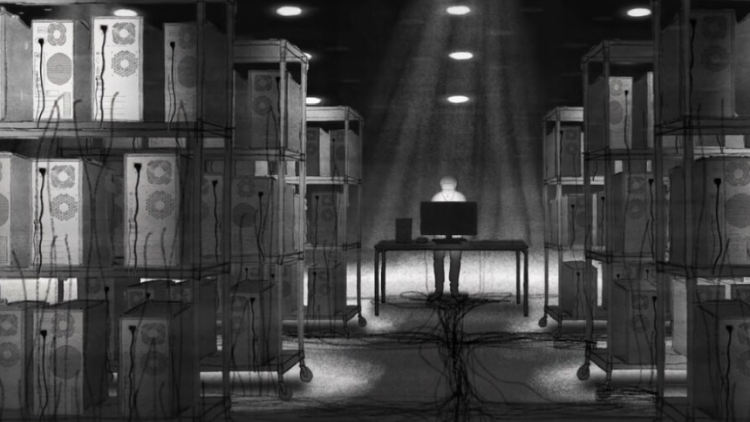 Absolute Denial gave me the same sort of feeling I had quite a few years ago, also at the Edinburgh International Film Festival, when they showed the now-acclaimed Indy, micro-budget SF flick Primer. Like Primer I went into this knowing little about it other than the blurb in the EIFF programme – these days it is rare to see a film we haven’t read of in advance, read interviews, reviews (yes, I’m aware of the irony of mentioning this in a review!), seen trailers etc, but in film festival land it’s more common, and it means you come in with few preconceptions, and often, as with Primer, walk out with a feeling of having just discovered something wonderful that few others have yet seen.

Stylistically I enjoyed seeing good, old-fashioned 2D animation used here, mostly monochromatic, making a lot of use of the bright lights (computer screens, overhead lights) and the contrasting darkness around those light. And while I’m sure that helps the animation workload, keeping it a bit simpler, it also works aesthetically here, giving the movie a stripped-down look, like panels from a black and white comics page, that focus less on looking showy and more on the narrative, and the huge philosophical can of worms it opens up. Away from the starkly effective visuals, the soundscape, both use of music and ambient sounds (especially the machinery noises) really heighten and enhance the atmosphere crafted by the imagery.

It’s when Al starts to come to life and talk – then slowly learn to actively debate – with David that the film really moves from interesting to intensely compelling. AI, our attitude to it, how we will use it, how it will relate to humans, these are all major philosophical questions of our time and ones many around the world with consider while working on the problem of not only how to create an working AI, but if they should, and what cares they should plan into it (and would any safeguards designed by mere human minds be enough when an AI reaches its higher potential?). The increasing pressure and stress on David and he realises how quickly Al is learning and growing pushes him further to the edge, and his increasingly erratic behaviour is in stark contrast to Al’s seemingly calm but purposeful demeanour (David’s obsessive behaviour often put me in mind of the excellent Pi).

Working with limited resource, Ryan Braund has created a compelling, intriguing, thought-provoking slice of Indy SF film, and I’m hoping after its festival circuit run it gets picked up by a distributor, because this is one I think a lot of SF fans will find fascinating.