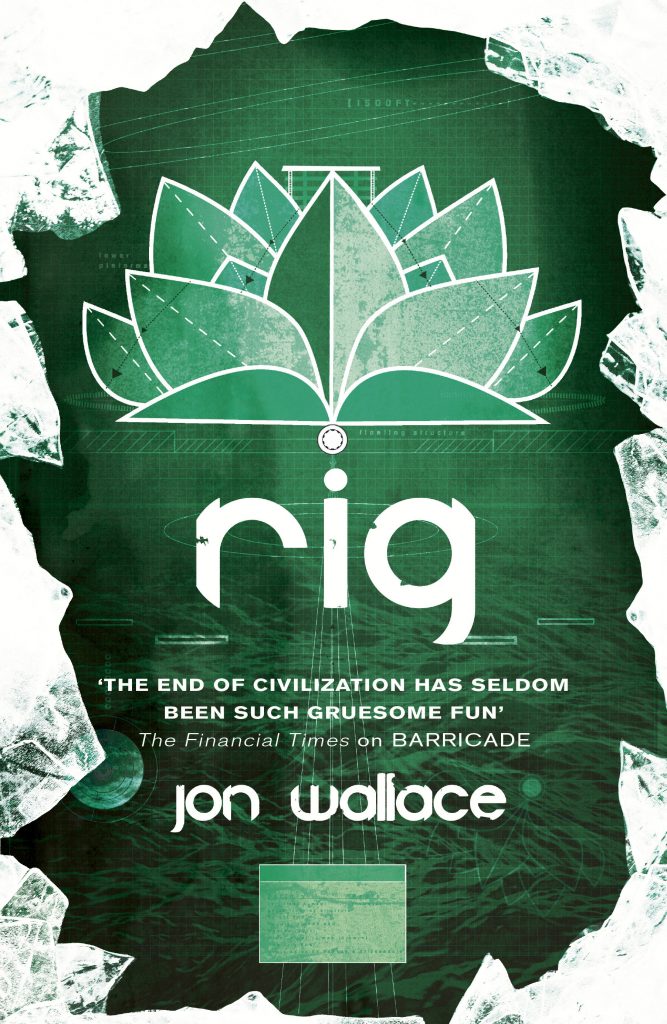 Back in 2014 I was offered an advance copy of a novel by a writer I knew only from short stories in the likes of Interzone (still a great place for short SF). The publisher was excited and comparing Jon Wallace’s Barricade to Richard Morgan’s powerhouse debut novel Altered Carbon. Which is one of my favourite debut novels (it would also be the very first book my long-running science fiction book group covered). So it had a big claim to live up to and by the literary gods, it damned well did and then some. It went on to become one of my favourite reads of the year (in fact a quote from my review can be seen in the new book), as did the sequel, Steeple. Fast-paced and action-packed, but still managing to layer in plenty of commentary on everything from the nature of being to environmental destruction, the refugee crisis, the classic Frankenstein monster that humans make in their pride only to then turn on them. Yes, they gave us gripping, tight, rapid action but also a good deal of thought too – a perfect having and eating the cake situation.

Given how highly I rated the first two books you’ll understand I was more than happy for a chance to read the new book, Rig. In Barricade Kenstibec – often shortened to just Ken – was a Power 9, a model of Ficial, an artificial being optimised for specific work (Ken is an engineer, others are medics, soldiers, even “pleasure models” – one of several nods to Blade Runner’s Replicants). Human-looking but a little too perfect, kept in perfect repair by clever nanotech, able to heal even horrendous injuries. Which is quite handy given this near-future world is ruined, chemical and nuclear pollution, a devastated world where the few remaining Reals (actual humans) now live a short, brutal life more like something from the Middle Ages, and like our centuries-ago ancestors heir to every infection going with little or no medical help any more. But a Ficial? They can shrug off almost anything. Until Ken is hit by a special virus which destroys his nano, leaving him, physically at least, almost human. And he’s not happy about it.

Where the first two books took us from the ruins of Edinburgh to a demolished London, and saw the fall from Ficial grace of Kenstibec, Rig opens up the setting, well away from the wretched mess left of the British Isles, with a group of Reals and a couple of Ficials working together on a new plan out in the Atlantic, off the eastern seaboard of  what had been American and Canada, using a beautifully designed, hi-tech floating base – the Lotus – as a sort of ark, rescuing youngsters from the barbarous slave markets in surviving settlements on the coast, to train for a new, better world to rise from the ashes. Ironically this modern Noah’s Ark had originally been part of the Martello Project – as the more historically astute of you will infer from the name, these were a form of fort, designed to repel unwanted visitors from the coast of the UK (mostly desperate refugees – a Daily Mail reader’s wet dream, no doubt).

Ken, now sporting a hi-tech mechanical arm to replace his real one, lost in Steeple (now that he can’t regrow damaged parts like a proper Ficial) is finding himself somewhat adrift on this new ocean life (pun intended, sorry). One of the Ficials now co-operating with the Real crew calls him brother, despite the virus having stripped his Ficial physical superiority from him. But Ken doesn’t feel entirely Ficial anymore – like a human he gets sick, he has to eat, excrete and all the other messy processes of life. And feelings, he’s developing feelings that the brutal Ficial conditioning would have kept burned out of his mind as inefficient. But he’s not human either, and he knows it – like Blade Runner’s Replicants he really doesn’t understand his emotions too well, he’s simply not had the experience. Fortunately he has some of the crew who have taken to him, not to mention Pistol, a dog who has become very attached to our Ken. In some ways he’s suffering a form of PTSD, and like similar sufferers of that condition his animal chum is a powerful device for helping him to hold it together.

Naturally the new human-Ficial plan to create a new, young population trained to make a better society and world from the spoiled ashes of the old goes awry. There are disagreements between the crew as to the correct way to do this, not least from a moral point of view. But their arguments are about to be rendered irrelevant by events – someone has been watching their trips to the coastal slave markets, someone who has designs on both their population and on the Lotus (which may now be an ark, but still carries a substantial military payload from the pre-devastation days, a rare and powerful prize).

And I am not going to spoil it for you by revealing any more of what happens, because this is a beautifully-paced roller-coaster, with some gripping, tight twists and turns and some major revelations. We get a little more of the history of the final days before the world collapsed and see more of the violent, small communities which are surviving it in the finest Mad Max style (yes, including some dangerous driving, a nice nod back to the first book when Ken had become a specialist in such driving trips), and the ways in which some groups will use even the end of the world for their own ends, power, privilege and enrichment. Slightly longer then the previous two books, Rig still maintains a cracking pace, delivering a number of high-octane action scenes. As with those earlier books it still healthily mixes these with a lot of observation and commentary to chew over alongside that action, from politics to religion, taking in a number of very current hot topics, from the environment to the refugee crisis to politics (including a reference to the last US president who reminded me a little of President Booth in Judge Dredd history) to the greedy one percent.

This is a terrific slice of action-fueled science fiction, but Rig, and the previous two books, are also a journey, not just the physical one Ken takes from Edinburgh to London to the Atlantic, but a journey of the self; he’s not properly Ficial, not Optimal anymore, but he’s not quite human either. But he’s slowly learning to be himself, whatever that now is, and to realise if he does there are others who will be with him on that journey. And those people, those friends, are perhaps more important than any Ficial efficiency, more important than anything else. All this served up with brilliant post-apocalyptic action on the high seas and the roads, delivering thrills and even some outright horror along the way. The Tin Man had it a lot easier than poor Kenstibec…