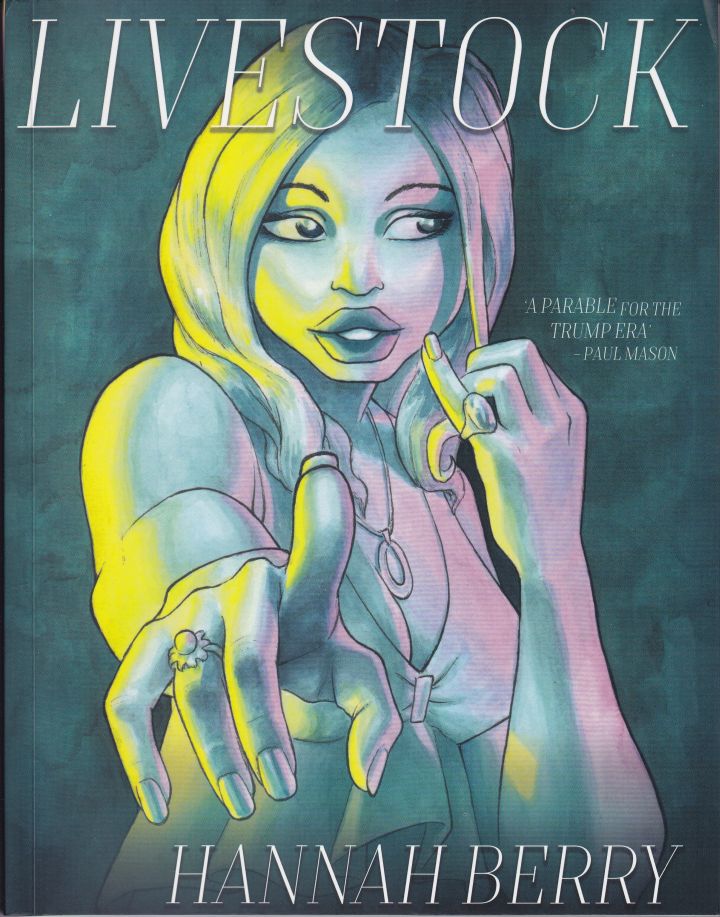 I’ve admired Hannah Berry’s work since her impressive, beautifully painted debut Britten & Brulightly, and since then, when it may have been easier to stick with more stories featuring those same characters, she’s created something totally different each time, and I’m pleased to see she continues to do so with Livestock. Here we have political chicanery, corprorate skulldugery, the deliberate manipulation of the media to mislead public opinion, the obsession with celebrity culture that permeates much of Western society, all wrapped up in a vicious satire which shows how all these different facets of modern society are interconnected, from manufactured celebs to Malcolm Tucker-tinged PR svengali (with great lines like “man’s drier than a taxidermied arsehole”. Yes, this is funny, often exceedingly so, but that humour is angry humour, and so it should be, because the Britain painted in Livestock is awfully close to the bone.

In this world the public relations firms are even more powerful than they are in the real world (a scary thought by itself), effectively taking Herman and Chomsky’s “manufacturing consent” ideas to a horrible and all-too-plausible extreme. Here Mr Rourke is the mover and shaker, organising both carefully contrived celebrities (of the type that would make the average boy band look like authentic indy rockers) and also PR work for the ruling government and major corporations. And here those are all very much entwined – we’ve had the nightmare of the “military-industrial complex” for many decades, and the mass media has played a role in promoting and normalising and legitimising for much of the 20th century (we can thank famous psychologist Freud’s descendants for much of that particular took becoming so commonly used to subvert democracy). Here the military-industrial complex comes with an entertainment division – I suppose some would argue it always has, to some extent, but here again it is taken to the logical and disturbing extreme. 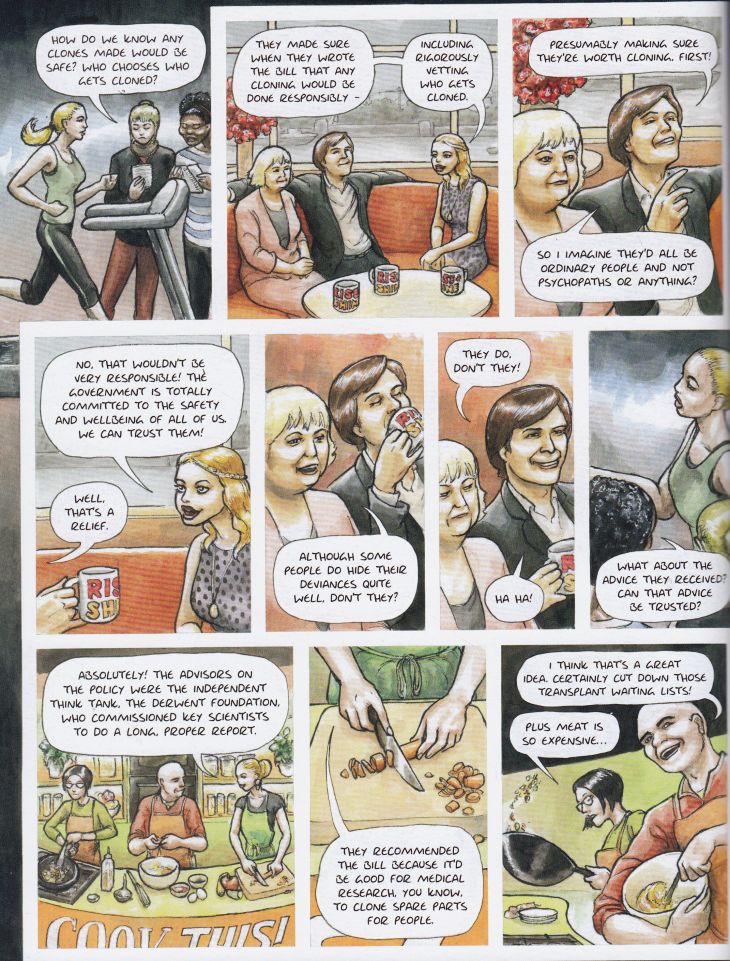 Have a problem with a pesky government leak exposing some very dodgy legislation? No problem call Mr Rourke, he’ll have his minions spinning more than a legion of spiders on crack. In Livestock the story has broken that legislation passed several years previously contained laws concealed inside various clauses that actually made legal genetic research into human cloning. It will surprise no-one to learn this secretive law was pushed through by lobbyists for a large corporation; such shadowy deals sadly happen on a daily basis in the parliaments and congresses of most of our supposedly democratic societies. The bumbling, hapless minister responsible, a man who would make Jim Hacker look like Lloyd George, is flailing in public as the reporters pounce on a juicy story. Rourke’s team soon deflects public interest with a mixture of carefully-created personal stories (minister adopts hero dog who saved child!) and throwing every more equally carefully-created celebrity “gossip” (entirely manufactured and controlled) to deflect the public’s short attention span. 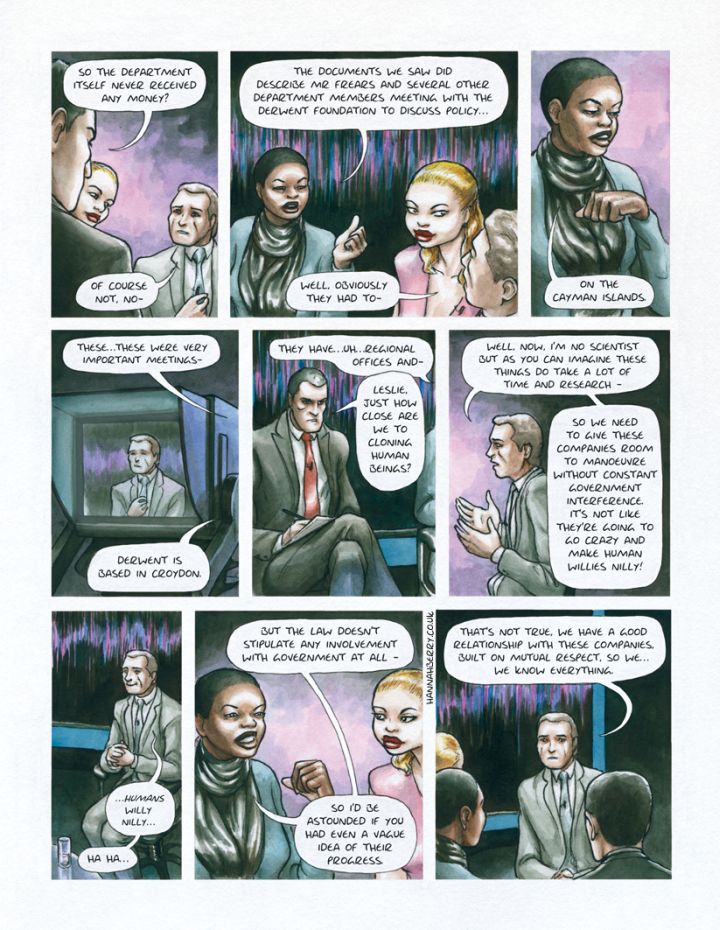 In Livestock the main glossy celeb in Rourke’s menagerie is Clementine Darling, twice winner of the Best Female Singer and Political Spokesperson at the Twammies awards. For all her celebrity power – media and public alike hanging off every word as this pop star is expected to speak on everything from her new (again manufactured) romance with a fellow star to the morality of genetic research and cloning, her thoughts (all finely rehearsed and fed to her in advance by the PR team) given as much, or indeed more, weight than those of actual experts, while light entertainment programmes are where these important issues are discussed (a total misuse of the term discussed) rather than on serious, hard news programmes. When Hannah was creating Livestock she couldn’t have known when it came out we’d be in the middle of another general election, and one that has seen the prime minister avoiding serious public discussion while happily appearing with her husband to talk inconsequential nonsense on lightweight entertainment shows, but we’ve had that just in the last few days and it makes Livestock feel all the more pertinent than it already was… 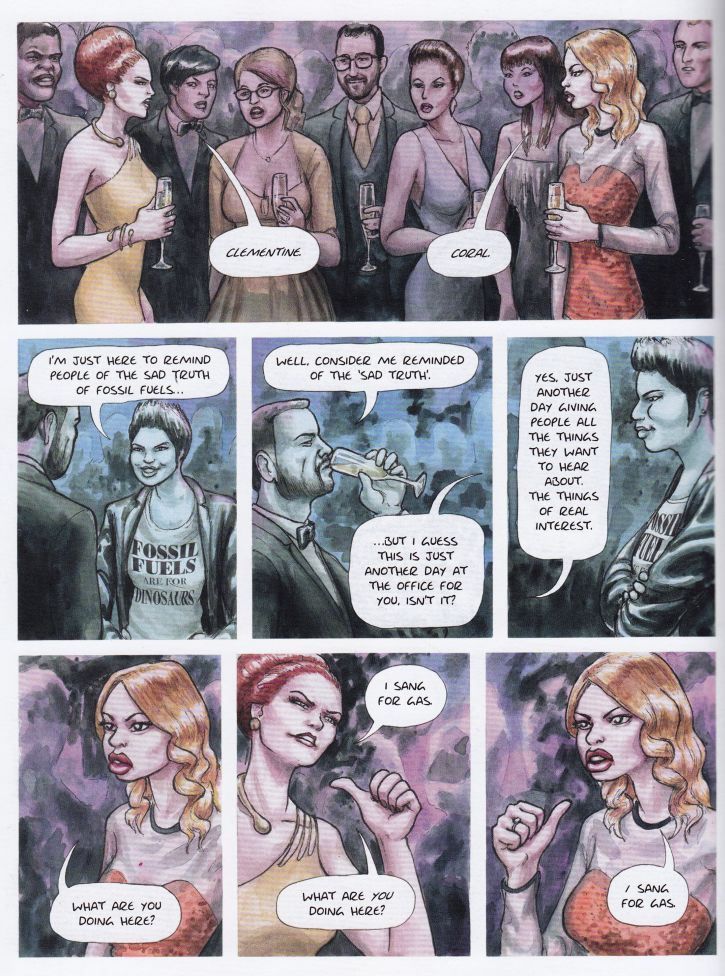 Clementine herself comes across as almost a blank slate, practically programmed for her public outings, be they making a new music video or a carefully orchestrated public spat with a rival. She’s treated almost like a child – her minders lead her to the limo after an event, strapping her into her seatbelt, asking if she wants her juice box and allowing her to “watch her programmes” (mostly a sickly soap opera which nicely parodies many aspects of the lives of the characters in Livestock). It’s exactly like parents taking a toddler on a trip, although there are hints that Clementine may be more than the quiet, docile, clay they shape, that she may be more aware of what’s going on. Her life may be even more arranged than those of a classic 30s Hollywood star (when the studio fixers would even go so far as to arrange marriages that suited the public persona of their big names), and her image may be used to not just sell records but sway the public focus on debates, but there’s a hint here that while she is exploited, and so are the press (and public), she may well be doing some exploiting of her own for her own gain.

It’s a very dark, bitter and entirely too plausible set of scenarios Hannah crafts here (all beautifully illustrated in her lovely, painted style), but fortunately there’s a lot of humour here to leaven those vicious barbs, from the ridiculous collapse of one of the few heavyweight news debates into celeb gossip oooh and ahhh-ing to a nice little aside at a celeb book launch (it took days to write!) where a group of real authors stand around looking at the media turnout and the champagne and muttering how their book launches aren’t like this. One of them adds “I didn’t even get a launch”; that particular author holds more than a passing resemblance to a certain Hannah Berry herself, to my eye. New headline pages of the clickbait variety punctuate the story; where RoboCop used hyped-up US style news programmes as a caustic sidebar to comment on the society portrayed in that film, here we’re down to quick soundbites and links which, frankly, while seemingly OTT for comic effect are actually not as bad as some actual media outlets use now (these also allow for a couple of other famous faces to cameo). 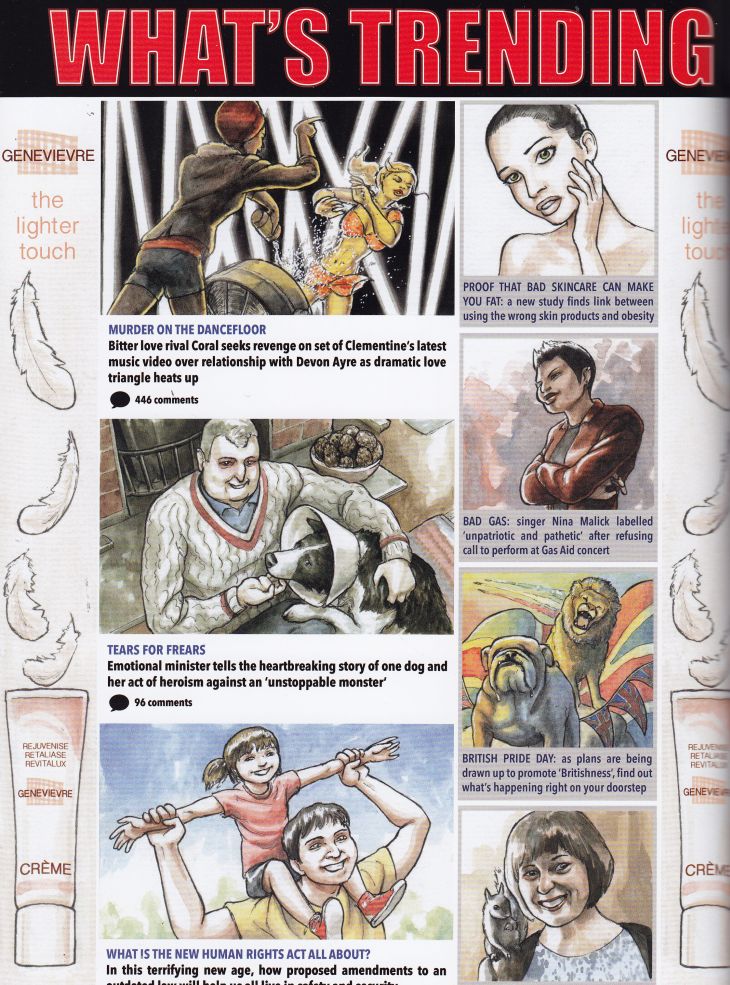 Livestock is dark, clever, bitter, biting and funny satire, laughing at the same time as it weeps at the way our media-saturated, high-channel, low-concentration level society is going, of how easily we can be manipulated, and how much of that blame is on the public as much as the companies, media and governments who try to spin that debate. It will make you laugh while also making you angry, and after the way politics has gone on both sides of the Atlantic in the last few months, Livestock is now even more topical and on the nose than when Hannah started it. Read it before our society devolves even further into the parody-satire that it seems to be becoming.