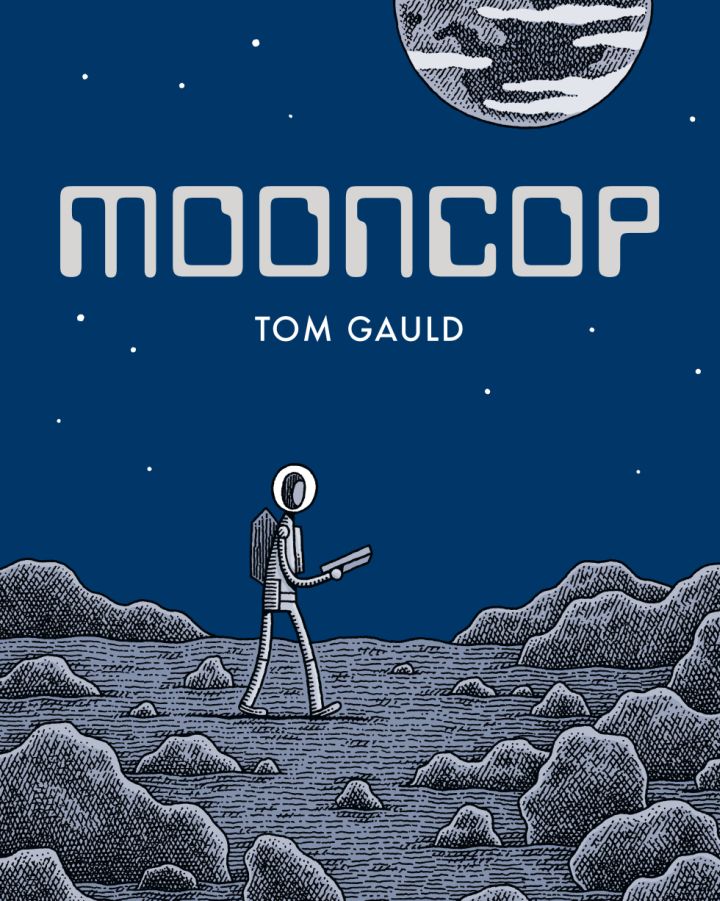 We’ve been huge fans of Tom Gauld’s work for ages here on the blog, so it’s always a pleasure to have a new book from him, and in my own case I also had the added pleasure of getting to meet and chat to Tom about Mooncop at the Edinburgh International Book Festival a few weeks ago (report here). In his weekly Guardian cartoons Tom has often referenced science fiction and also a sort of retro-futurism which somehow manages to combine humour and amusement along with nostalgia and a gentle melancholy. Think, for an example closely related to his new book, of his cartoon of three panels, one showing the Moon from billions of years ago to 1969, an unchanging vacuum desert, then a panel showing the brief visits of Apollo, then the last showing the Moon from 1973 onwards, back once more to the empty, unchanging desert, empty of people, the bright moment of optimistic future exploration has been and gone. 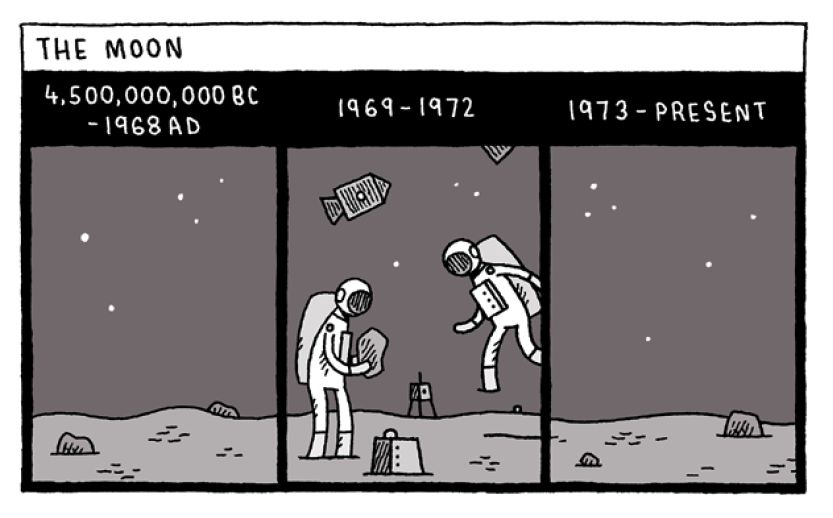 (revisiting some of Tom’s earlier work before our Edinburgh Book Festival chat I saw this strip in a different light now, perhaps an early ancestor of what would become some elements of Mooncop. Collected in the You’re All Jealous of My Jetpack by Tom Gauld, published Drawn & Quarterly)

Mooncop takes that feeling and that older, optimistic belief in the future, one many of us of a certain age grew up, that by the 21st century we would be living on the Moon, holidays in space, jet packs for all (an old children’s guide to the future proudly proclaiming all of this as if it were fact was one of Tom’s inspirations for the book), and delivers a story that celebrates the wonders of the stark Lunar landscape while also questioning why we thought we would want to live there in the first place. “Living on the Moon, whatever were we thinking? It seems rather silly now” comments one older lady, one of the original colony designers, to the Mooncop, who replies “Not to me. I think what you did was wonderful”. 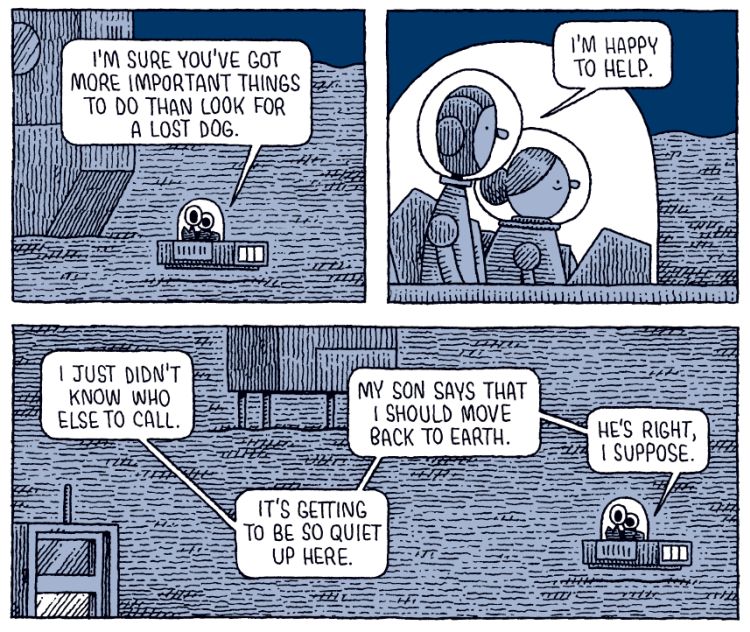 Our cop zooms around that astonishing landscape in his hover-car, but with little to do – zero crimes, means actually his efficiency rating is high, but that low crime is mostly because there are fewer and fewer people still living on the colony. Helping an old lady find her missing dog (off for a Lunar walk in his pressurised “hamster ball”, which makes for some smile-inducing visuals), or retrieving the faulty robotic automaton of Neil Armstrong (a clever way to give him a sort-of cameo and pay homage to that first human on the Moon) is about the worst he has to deal with in his police duties. And as he returns to his apartments each evening (a relative term on the Moon) he experiences an ennui, that this place he always wanted to come to and finds beautiful is slowly dying as people give up and move back to Earth. 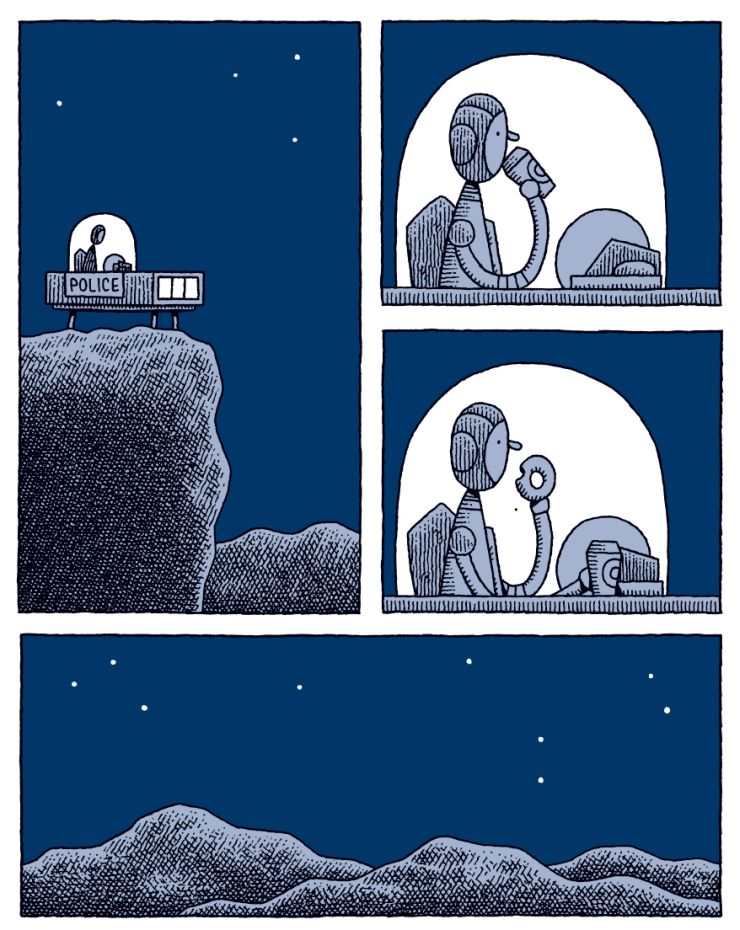 Perhaps he should too? What’s the point in being the only cop on the Moon if there are almost no people for him to serve and protect? Every day there are fewer and fewer. He feels like he arrived at a great party after it had started to break up, and starts to consider the other may be right and he should request a move back to Earth too. And yet… And yet, it’s the Moon, it’s that stark, otherworldly beauty and the image of the Earth rising above the horizon, a homage to that remarkable photo, Earthrise, taken by the crew of Apollo 8 as they came out of the shadow of the dark side of the Moon on Christmas Eve, 1968, the first time any human being had ever had a view of the whole globe hanging in space.

He loves it, and as the book continues, as the 60s-style optimistic, shiny Big Future fades in the face of everyday necessity and reality Mooncop becomes less about the science fiction or the humour (although both remain present, I should add) and more about that personal journey, not the physical one to the Moon but the inner one we all have to take at some point, about getting to a place, both physically and emotionally, where we don’t judge our place by what others say but how we feel about it. Our slightly-lost Lunar policeman needs to figure out where he is happiest, what makes him feel right. It’s a lovely, gentle tale of how the future used to look on one level, while on another level it’s about how it isn’t the discoveries and new locations and technologies which make a good future, it’s us ourselves and our understanding of where we want to fit into it all. 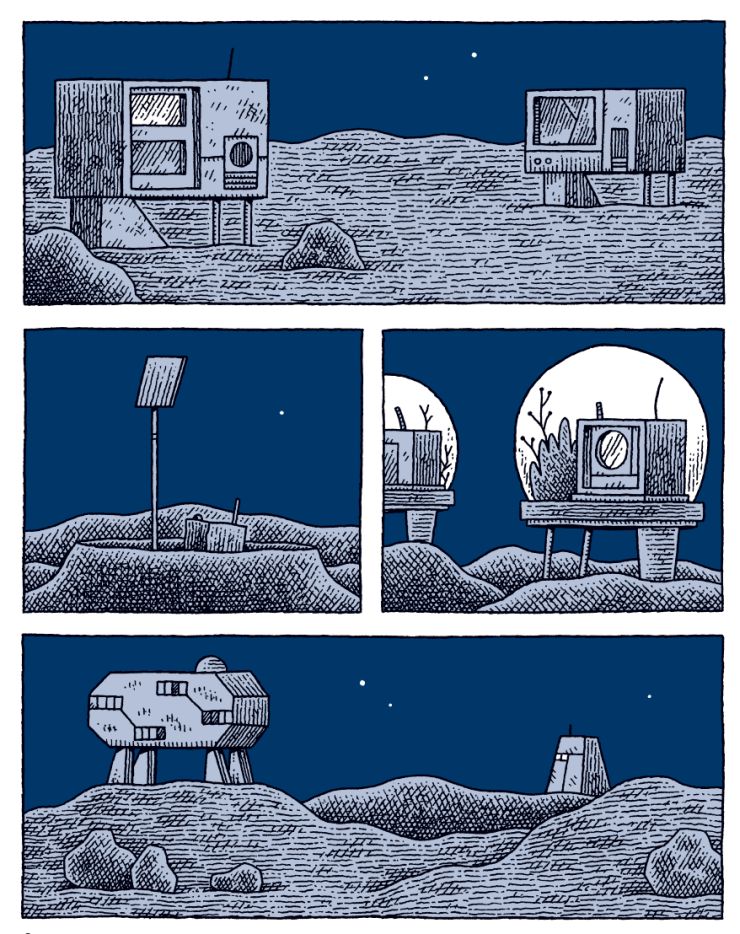 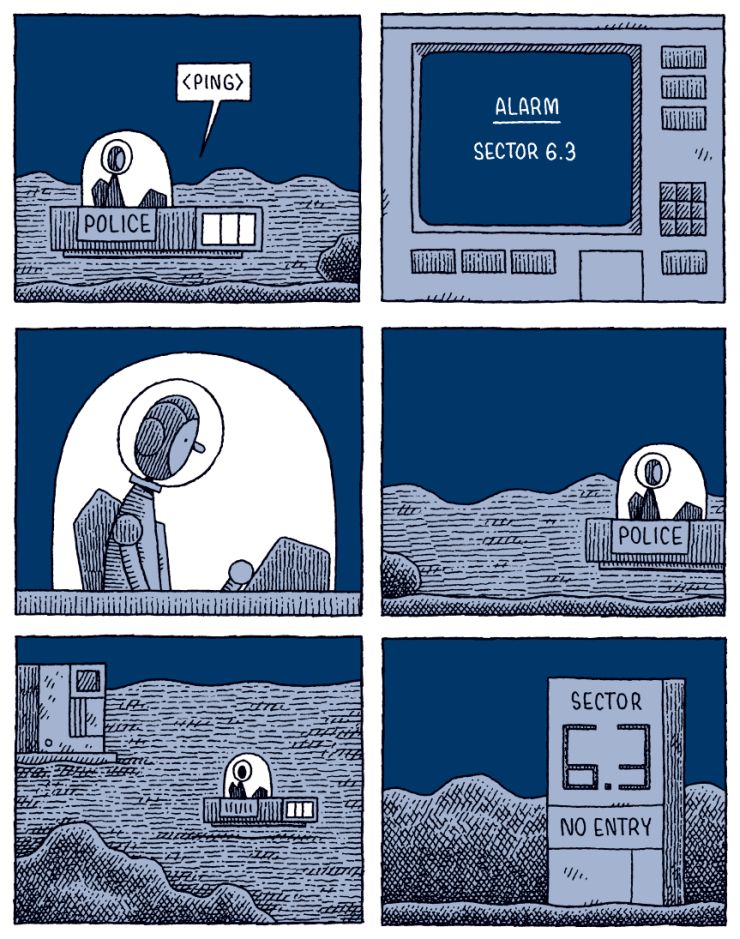 The art is gorgeous throughout, Tom’s minimalist approach paying dividends on the largely barren Lunar landscape, while the colony itself is quite different from many other Moonbases I’ve seen in science fiction. Rather than a huge, domed city sprawling across the plains or a large underground base as in 2001, here it’s individual buildings – apartments, small houses, trees, coffee shops (even a Mooncop needs coffee and donuts, which of course come packed in their own little pressurised containers), with their own little domes, spread out across the landscape, reminiscent of a small town in one of the great deserts of the USA, and there are some nice little references in the art to visual inspirations from the real-world (once futuristic, now run-down cube apartments in Japan) and from science fiction (from Duncan Jones’ Moon to 2001 and Silent Running). It’s a lovely, smile-inducing work, presented in a lovely, well-designed small flexible hardback with metallic finish (a nice addition to your shelves) 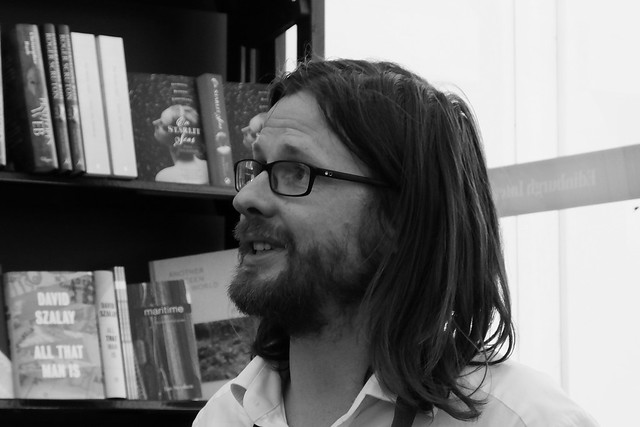 (Tom Gauld at the Edinburgh International Book Festival, photo from my Flickr)