I regularly look through the archives on my Flickr photostream, and if I see any pics I shot on this day in previous years I will pick out a few and post them on Twitter. This one cropped up recently, taken in 2011. I was actually in the Dovecot Studios for Doors Open Day to take some photos and explore a bit – it’s an old public swimming pool, long closed and then converted into a great studio space for textile artists. Being an old pool it has a large glass roof which lets lots of natural light into the space where the swimming pool would once have been, which is obviously great for the artists. The upper walkway above what would have been the pool has been retained, and as I was taking some photos of the studio I noticed these two ladies at the other end of the walkway, and the way the natural light and shadows were around them was just begging for a monochrome shot, and as I had the camera out I zoomed in and took a quick pic. 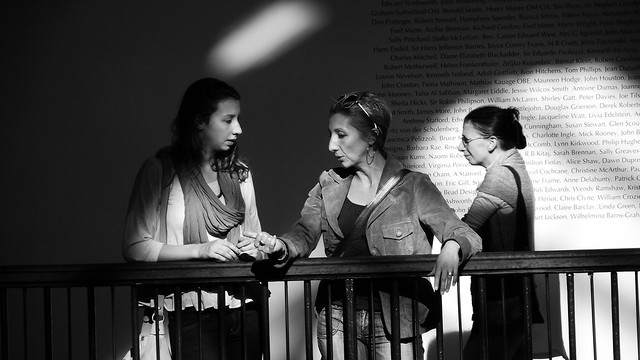 I had almost forgotten I had taken this one until it came up when checking the Flickr archives, still quite pleased with it considering it was a quick shot taken on the spur of the moment just because the positions, light and shadow all seemed just right.