Burned off a little of the constant over-feeding from the Festive period by going for a good two-hour walk on the beach with my mate Gordon when he took his dog for a decent run (Bruce does enjoy a good run on the beach although I think he enjoys all the other dogs he meets more, all those bums to sniff). On the way back the daylight was fading rapidly and the Forth was full of the noise of the many birds making last forays into the wet sand for food or flocking through the air while the lamp came on in the Fidra lighthouse.

Down on the beach next to Yellowcraig by the Fidra Lighthouse, a couple of miles up the coast from North Berwick this afternoon. We lucked out in that the gray clouds parted to give us some sunshine, but the chill wind coming in right from the North Sea was bitterly cold and it drove the waves into the rocky shore so energetically we had to cut short our walk because sometimes the waves would literally come right up the entire beach to the dunes, so if you didn’t want to do some November paddling (and this water is bloody cold in August!) then it was best to just head off elsewhere. 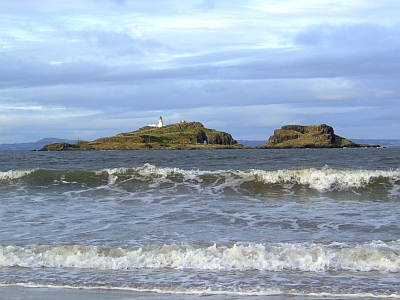 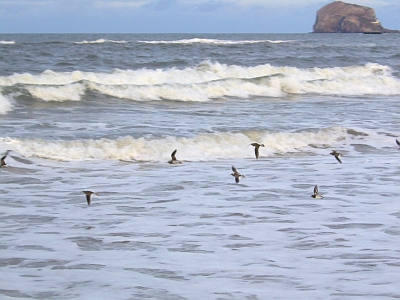