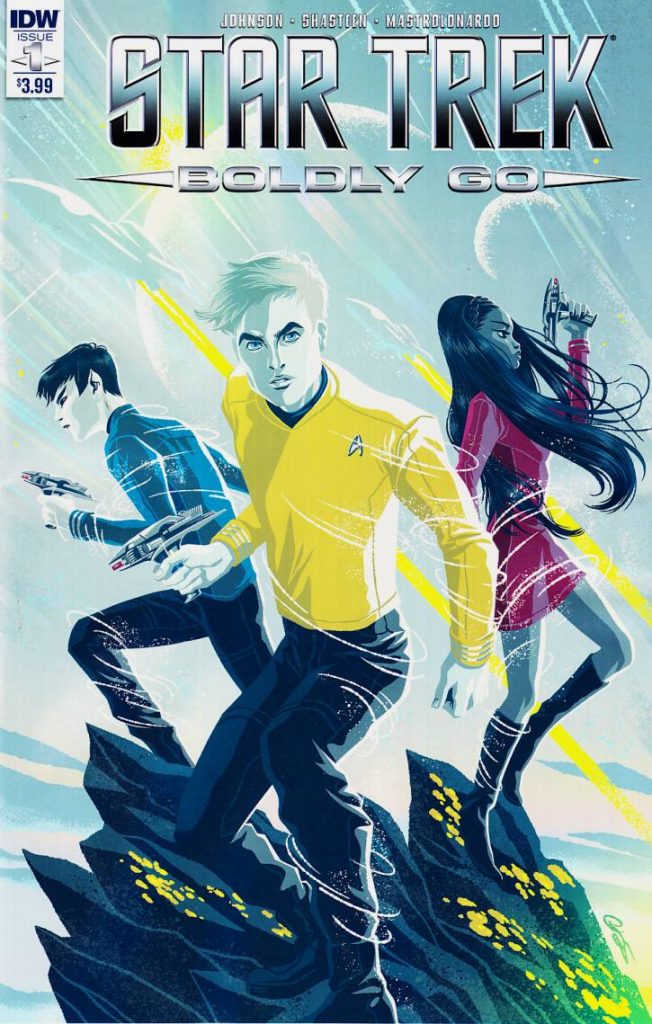 I’ve been a Trek fan since I was knee-high to a Tribble, but I must confess I rarely dabble in the novels and comics spun off from the various incarnations of Trek, but every now and then one comes along that tractor beams in my attention. And right off the bat I will admit that this cracking cover artwork by George Caltsoudas was a part of that, I couldn’t resist picking it up for a wee peek, and once I did Johnson and Shasteen did a fine job of keeping my attention for the whole read.

Set soon after the events of the recent Into Darkness movie, with the Enterprise destroyed our crew have been displaced – Scotty is lecturing at Starfleet Academy (and having to use put-downs on some snotty cadets in his class), Spock is on sabbatical on New Vulcan with his father (Uhura has decided to accompany him and learn about Vulcan culture as well as spend time with him), Sulu is now promoted to Commander is First Officer on the USS Concord (under the command of a young captain called Terrell – yes, as in Star Trek Wrath of Khan’s Paul Winfield) in a remote part of the galaxy. Meanwhile James T Kirk is the interim captain on the USS Endeavour, another Constitution-class starship. 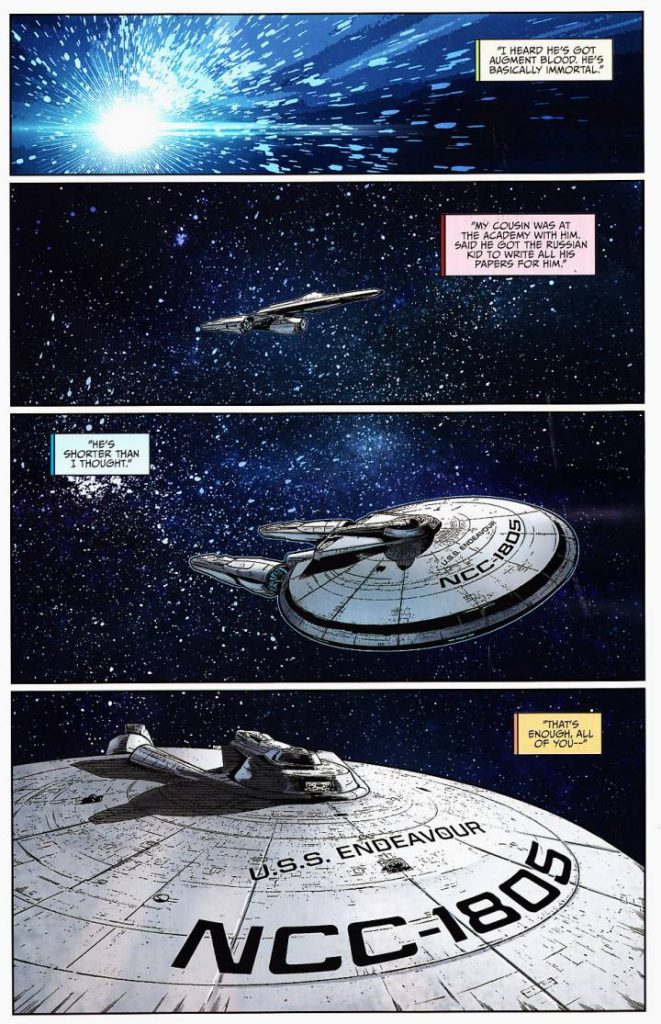 There’s a nice scene of the over-excited bridge officers of the Endeavour discussing their new temporary captain before he arrives. It’s a nice scene, reminding us that highly trained Starfleet officers or not, people are people and they love a wee gossip, especially about each other. And let’s face it, Kirk must have a hell of a reputation in the fleet by this point, some good, some bad, some true, some pure fantasy and it’s pretty understandable his new crew would be nattering about it, until his Federation-born Romulan First Officer, Commander Valas snaps their attention back to duty with a crisp “Captain on the bridge!”, followed by a wry “at ease, I promise I didn’t hear anything” from an amused Kirk.

All of these groups are about to have their new paths altered however – the Concord encounters a strange vessel approaching them at high speed, emitting an odd signal they can’t quite decipher. And then things cut off – on the Endeavour a garbled distress call is intercepted, and with both ships being so far out Kirk opts not to wait for orders from HQ (naturally, this is Kirk, after all), as they are the closest to the Concord, and they make haste to rescue their comrades, while Kirk has the strange message forwarded to Uhura to see if she can tease some meaning from it. 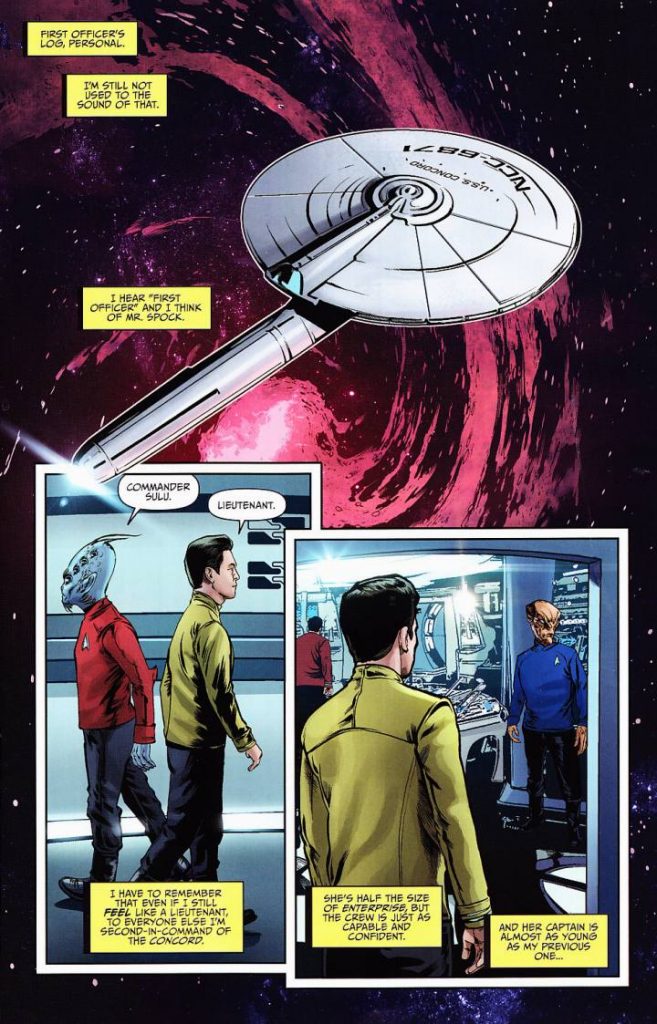 As I said, I only occasionally read Trek novels or comics, despite years of following all the shows and films. Not sure why, I think perhaps while I liked some over the year there were some where the characters didn’t match the way I thought they were and it put me off. No such problem here, Shasteen does a fine job of creating some fine, sharp comic art and carries the likenesses of the modern Trek film characters very well (and adds in some nice visual references to Trek history – Uhura’s Vulcan garb being strongly reminiscent of Spock’s wife-to-be in the classic Amok Time episode, Spock’s attire also similar references some Nimoy-era movie costumes, little touches but they work and they also let you know the creators here are clearly familiar with Trek history and lore, which I’m sure fans appreciate).

The duo also really nail the characters – Kirk’s wry amusement at his own legend preceding him onto his new bridge is very in character, for instance, a young Sulu knowing he is experienced through his Enterprise days, despite his lack of years, but still pondering if he is really up to being a First Officer yet, Scotty’s smart smack-down of a cheeky cadet in his lectures, Uhura more than holding her own on Vulcan, it all rings very true and authentic, and that appealed greatly to me, as much as the actual story did (and let’s be honest, we love these characters, they are family to us and we love Trek as much for them as we do the stories). 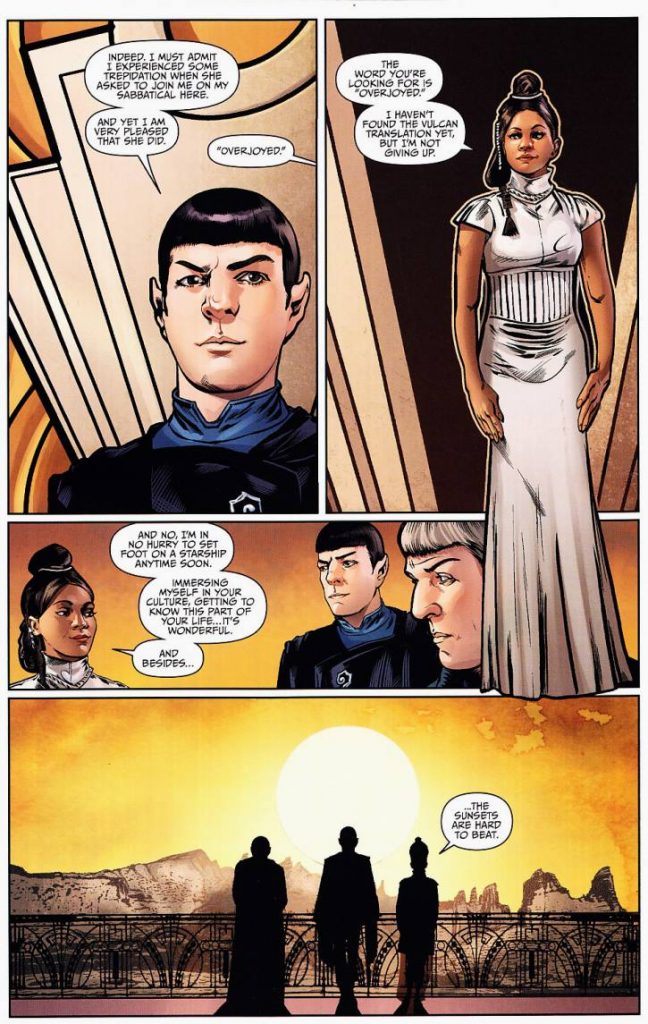 And there are numerous references to Trek history (great to see this timeline’s version of Terrell, also good to see a Romulan officer, given The Next Generation once pondered the fairness of anyone of Romulan descent being barred from serving). Add in this mystery vessel, as yet unseen but there are hints you will recognise (and no, I won’t spoil them by mentioning them here), and you’ve got a terrific first issue, establishing the post-movie scene for our various crew members nicely and setting their new adventures into place and leaving us with an intriguing situation and hook – pretty good going for a single issue.