Taking some people watching shots around town on a beautifully bright spring day (lovely light for taking snaps), this woman was happily lost in her book, sitting in the sunlight in Bristo Square by Edinburgh University: 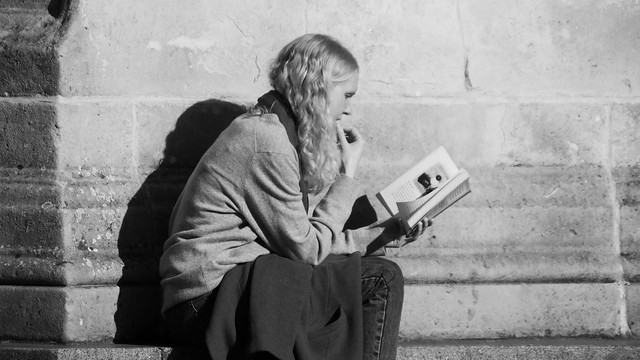 It is Easter and I saw an Easter bunny girl! I think she and her fellow in a rather sexy bunny girl outfit were doing something for charity, carrying baskets with eggs. A form of tryptich on the art board from the always interesting lot at the Saint John’s church on Princes Street, with three things the Roman Catholic Church has had problems with over its history (if they had picked everything the church has been prejudiced against, let alone violently opposed to they’d have needed a canvas longer than all of Princes Street), placed right in full view of where the Pope would go past in his recent and most unwelcome visit (why is the taxpayer funding a trip from a religious figure? It’s not a ‘state’ visit since the Vatican isn’t a real state but a religious theocracy holdover from medieval times. Why are we paying for a homophobic, bigoted, mysoginistic, anti-science, intolerant former Nazi to come to our country and then to insult us?). “I wonder if one day that, you’ll say that, you care
If you say you love me madly, I’ll gladly, be there
Like a puppet on a string

Love is just like a merry-go-round
With all the fun in the air
One day I’m feeling down on the ground
Then I’m up in the air
Are you leading me on?
Tomorrow will you be gone?

I wonder if one day that, you’ll say that, you care
If you love me madly, I’ll gladly, be there
Like a puppet on a string

I may win on the roundabout
Then I’ll lose on the swings
In or out, there is never a doubt
Just who’s pulling the strings
I’m all tied up to you
But where’s it leading me to?

I wonder if one day that, you’ll say that, you care
If you say you love me madly, I’ll gladly, be there
Like a puppet on a string

I wonder if one day that, you’ll say that, you care
If you say you love me madly, I’ll gladly, be there
Like a puppet on a string

I loved these Fringe performers on the Royal Mile, snapped on the way home from work: The woman playing the puppet pulled some fabulous expressions: For some reason this just seemed like one of these street shots that worked better in monochrome. I don’t know why, but some pics just work better in black and white.