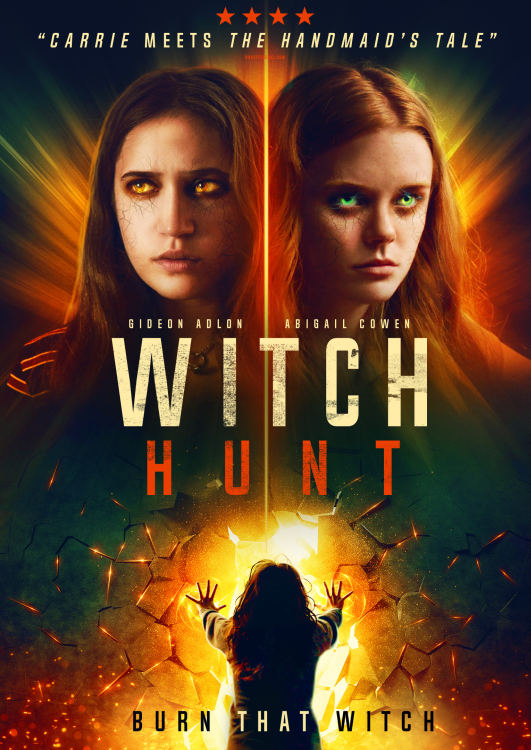 Ella Callahan, who both writes and directs here, delivers a compelling take on witchcraft that explores its historical overtones, rooted in men’s fear of powerful, independent women and their compulsive need to control and dominate them into submission. While the Witch Hunt is set in contemporary America, and touches on modern issues, it also traces its lineage back the days of the early colonists, long before America was a nation, opening with a highly disturbing sequence – in this new land of growing intolerance it isn’t enough simply to persecute any woman who shows magical abilities, to deny them the normal rights of any citizen, they can and are subject to the barbaric, monstrous death sentence passed down through history for witchcraft: being burned alive.

Right from the start Callahan shows us this repressive, brutal society in action, a red-haired woman tied to a public stake, the looming figure of the Witchfinder, seen at first only from behind, clutching the burning torch, the flames lit and rising, the desperation on the woman’s face, then the screaming as the heat, smoke and flames reach her, her skin burning as she is forced to endure this utterly horrific, violently painful and prolonged death. The god-fearing citizens watch the spectacle, among them her own two young girls, the older sister Fiona (Abigail Cowen), and her much younger sibling, Shae (Echo Campbell), forced to watch their mother’s death, powerless to help, aware how easily the crowd could turn on them for being “different”.

This isn’t even a society where witches are hunted for practising dark magics on anyone – simply being born with magical ability is enough. The magical beings are all women, the witch hunter force we see are usually male, lead by Christian Camargo’s officer, who proudly explains that his family have been witch hunters for generations. To him this is a matter of honour for his family, but in reality it simply shows how the same lies, fears and bigotry are perpetuated endlessly through the generations and years. This is a US with border wall to stop women fleeing to sanctuary in Mexico, where schools indoctrinate the students into unquestioning belief in the constitutional amendment that covers the witchcraft persecutions. Schoolgirls are routinely subjected to medical tests for “witch marks”, those who do not pass are given a modern form of the medieval “ducking”, strapped to chairs, dunked into the school swimming pool to check if they are witches or not (something which can obviously go horribly wrong).

Martha Goode (Elizabeth Mitchell) is a single mother, bringing up her teen daughter Claire (Gideon Adlon) and her two smaller boys after the death of her husband, in a large, remote old farmhouse. She is also a part of a modern day “underground railroad”, which, like its predecessor before and during the US Civil War in the mid 19th century, uses a network of safe houses to transport and hide victims before smuggling them to safety. Of course this comes with enormous risk – the authorities are now pushing not only for more sanctions on witches but to also impose them on the children of anyone found guilty of witchcraft, regardless of what they have or have not done.

Claire doesn’t understand why her mother risks them all for strangers – she and her teenage girlfriends have been brought up to accept the witch hunting as necessary and required, so she is already suspicious of these desperate women (in much the same way the Nazis ensured all levels of society were given the same brainwashing of anti-Semitism in the 1930s), and being a teen she also resents the fact that this means she doesn’t get to do regular teen stuff like have her friends over (obviously impossible in case they saw one of the hidden witches in the house). When Fiona and little Shae wash up on their doorstep and a breakdown in the usual underground chain means they have to stay longer than usual, it puts the family at far more risk, but also means Claire starts to get to know the similarly aged Fiona, and this begins to change things.

This is a fascinating and disturbing film – it harks back to the earliest histories of Europeans in the Americas, with the bloody, violent witchcraft persecutions of innocent women (even Martha’s surname Goode, could be seen as another nod to that terrible time as several women famously accused during the infamous Salem trials were from the Good family), but it also draws heavily on the modern day. The large wall along the southern border and the callous men of the witch hunting department who patrol it has obvious echoes in the recent Trump era in the US, while the fact that, as with earlier historical cases, this modern witch hunting uses society and law to police and control women, keep them in their place, with men ensuring the laws are carried out without mercy. It partakes as much of Atwood’s superb Handmaid’s Tale as it does historic abuse of women for witchcraft, touches on the #MeToo era movement, the slavery era, even the Suffragette era (as with that time, many women have been conditioned by their society to believe and support these laws which harm other women), and draws in feminist iconography from pop culture, such as Thelma and Louise.

I suspect this is one of those films where the more you think about it, the more you will see in it – it’s a gripping and frequently disturbing narrative in its own right, not least with Camargo’s witch hunter who is so matter of fact about the rightness of his brutal repression and the almost powerlessness of the women caught up in this system, but there are so many elements to think about here that it will resonate in your head long after viewing. Forget that pretty generic poster and cover artwork, this is a far more complex and mature work than it would suggest, and well worthy of your time.