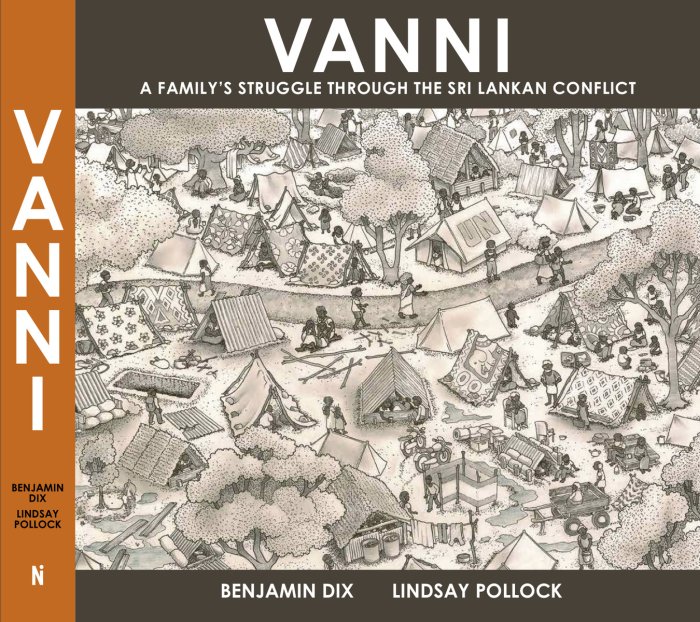 New Internationalist and Myriad Editions have collaborated on another graphic reportage work, following the fascinating and moving Escaping War and Waves by Olivier Kugler last year (reviewed here). In Vanni Benjamin Dix and Lindsay Pollock explore the tragedies of a land that should be the very image of a tropical paradise, Sri Lanka, starting with the natural catastrophe of the 2004 tsunami, then later the years and years of the grinding civil war in that island, which saw thousands of deaths, disappearances, tortures and other atrocities and masses of displaced civilians caught in the middle, killed, maimed, driven from their homes once more, but this time by human-made disasters, not the anger of the waves.

We get to know Antoni and his family, from the grandmother to the youngest kids, living in a simple but happy life in their wee village on the coast, where fishing provides a living. The Tamil Tigers, fighting against the Sri Lankan army and government which has a long record of treating Tamil people as second class citizens. While understanding the struggle, Antoni and his family are as wary of the Tigers as they are of government troops, and for good reason – they don’t want the young men of their family to be co-opted into the fighting, but of course, inevitably their family is drawn into it (in extremely upsetting scenes later on the Tigers resort to raiding villages and refugee camps, press-ganging any women or men of the right age into service against their will, including some of the young women of the family). 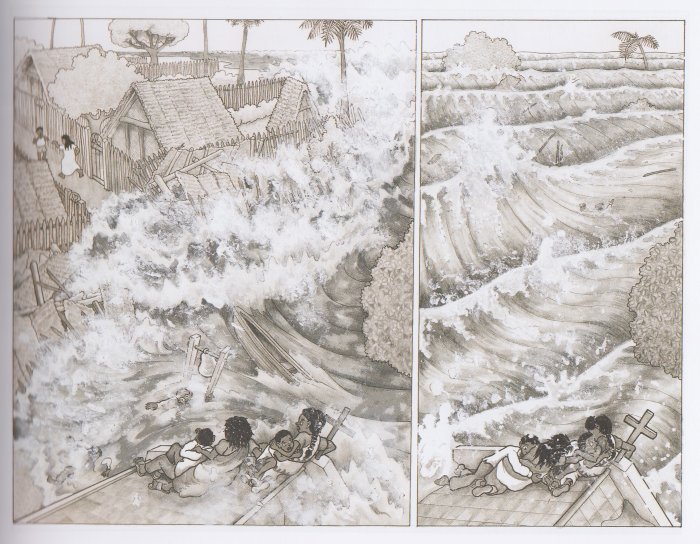 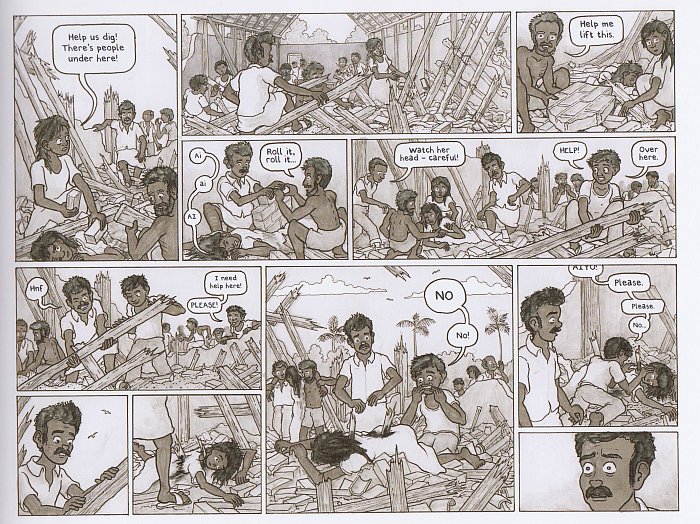 The threat may be on the horizon, but before the war expands to swallow their world, first nature delivers a terrifying event with the tsunami. Pollock’s mostly monochrome artwork moves from smaller panels to four pages with very big panels, the large format of the book (almost quarto sized, I think), allowing the art to really shine. Those four pages utilise the large panels and no dialogue, just “silent” imagery as the wave arrives. The terrified villagers are trying to escape inland, but the angry ocean is far too swift; some desperately make for the roof of the one really solid building, the stone church (their own homes being much flimsier). In four large panels the wave rears up as it strikes the land, washing over trees, buildings, people, the irresistible, awful power of nature made abundantly clear. The following two pages remain free of dialogue, depicting the ruined landscape and shattered village left by the passage of the mighty wave. It is simple and powerful and awful; a terrifying depiction of how vulnerable we are in the face of nature.

The aftermath is extremely emotional, both in story and art – Pollock skilfully depicts the “thousand yard stare” of some of the survivors. Any of us who have been sudden, shocking events such as a bad accident, a sudden death in the family, a fire, will be familiar with that expression that clearly signals the utter shock of your world being ripped apart, the grief, the numbness, the feeling of what just happened, how could it happen, how could things become so terrible so quickly? It’s a form of PTSD, and that is an internal scar on mind and soul that never truly goes away. In another, later scene one of the younger lads of the family, tired of refugee camps, returns to the sea and swims. As he dives under the water his village re-appears on the shore, as it was before, but when he surfaces and looks, all he sees is wreckage and refugee tents; it’s gone for good, and the momentary peace being in the sea gave him vanishes as quickly as the illusion of his old home. 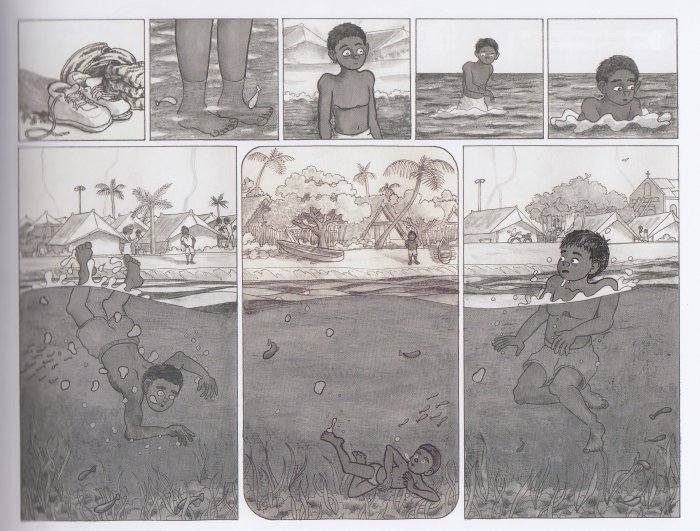 Worse is to come as the civil war grows though. The refugee camps, already struggling, are over-burdened by new columns of civilians fleeing the fighting, and, as in every way our species has ever wages, those civilians often get caught in the cross-fire, shells and bombs hitting the camps. Supposedly by accident, and of course some may be accidental, but as the human rights violations rise it is obvious that some of the attacks on the camps are part of a deliberate fear campaign, with no regard for civilian lives, both sides committing atrocities in the name of their respective goals, both supposedly fighting “for the people” but in reality not giving a damn about those actual people who are suffering and dying.

There are many scenes here which are hard, as you would expect from this subject matter. Not only major scenes of death and destruction, but smaller scale depictions – refugees hobbling in their columns, some missing limbs from bombings and mines, the looks on the faces of children and adults, the obsessive over-protection of some of the older members of the family to the children, clinging to them, not letting them leave the tent or their sight for fear of another attack or disaster claiming them, desperately trying to protect what little is left to them and terrified that in the end they won’t be able to do so; the feeling of panic and helplessness is palpable. In other scenes we see torture and execution – even here though, while not shying from showing the shocking events, Pollock, I noticed censored part of his art where two victims are forced to strip naked to humiliate them before being shot, a small touch, but one I found moving, as the artist attempted to give those men at least a tiny shred of dignity. 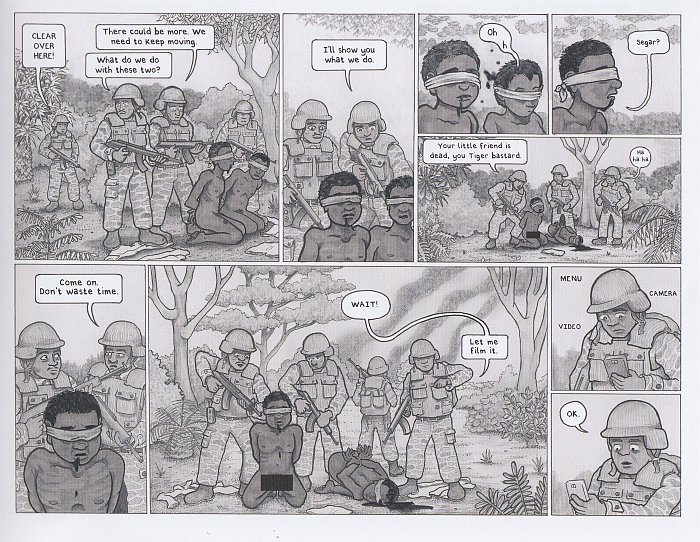 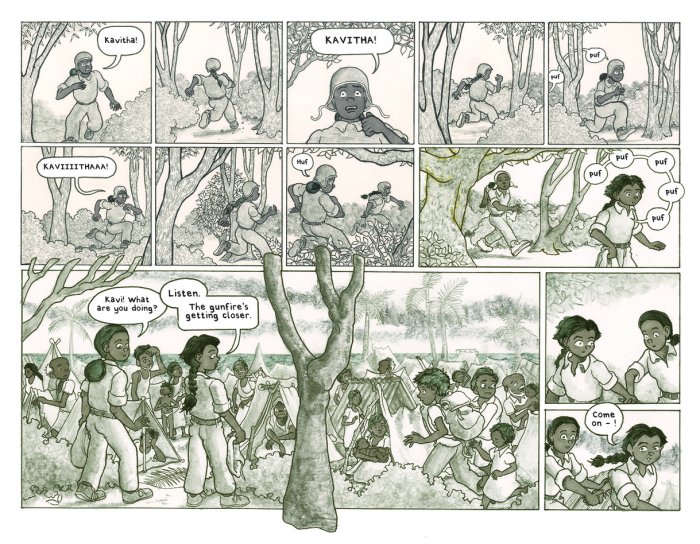 Vanni is very much inspired by Spiegelman’s Maus and the graphic reportage of Joe Sacco – Dix, in fact, mentions these in his own notes in the book, and how he read some of these works while he was in Sri Lanka with the UN relief agencies. The characters are fictionalised here, but the stories are real enough, taken from many personal interviews with eyewitnesses (now scattered around the world from India to France, Britain and Canada as asylum seekers), the names and elements of the stories altered somewhat to protect the and their family members who are still in Sri Lanka from potential vengeful retribution from the government there, a government which still downplays the huge scale of the civilian atrocities during the war and their own culpability in it to this day (their continued denials makes it all the more important that books like this give voice to the victims).

No, this is not an easy read, and you may well ask, why do some of us read books like Vanni or Maus or Footsteps in Gaza when we know how upsetting it will be? Personally I have always subscribed to the old adage of “bearing witness” – if you cannot change events (and clearly we cannot with past historical events) then you at least try to bear witness to them, to be aware of them and make others aware, not to let the conspiracy of silence blanket those events and hide the foul deeds of the perpetrators from the eyes of the world. The comics medium is, I think, remarkably well-suited to exploring these kinds of tales in an accessible manner, and Vanni can hold its head up alongside the likes of Sacco for giving a voice to those most of the world has forgotten, to share their cautionary tale of how quickly a seemingly stable, normal society can tear itself apart and its people with it.