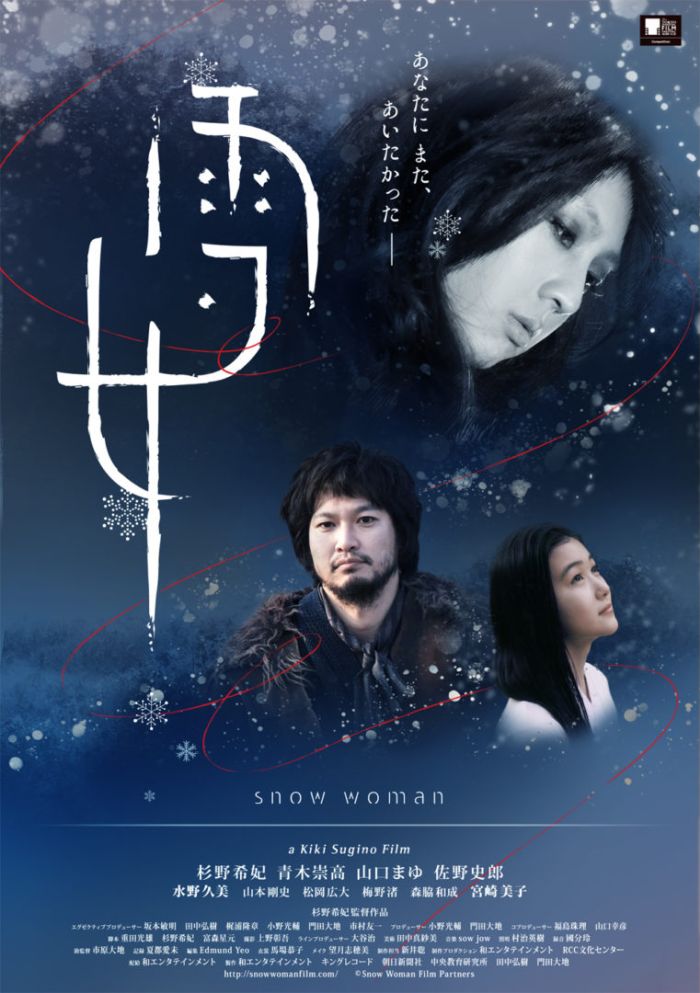 Another of the films I caught during the recent Edinburgh International Film Festival was Kiki Sugino’s hauntingly beautiful film from Japan, Snow Woman. Drawing on an ancient folkloric tradition of the Yuki-onna, a spirit, almost ghostly being who, like the vampire, has had many variations in the telling and re-telling of her tale across the year. Here director Sugino takes the eponymous role, first appearing in an opening prologue, shot in a silvery black and white as a pair of hunters struggle through heavy snow on the mountains around Hiroshima, the elder male clearly losing the struggle, his young companion aiding him into the relative shelter of an old hunting cabin.

Awoken in the middle of the night, the younger man, Minokichi, is frozen by terror as much as the bitter cold, for their rough shelter has been invaded silently by a pale woman with piercing eyes and long, dark hair, crouched over his companion, and as her chill breath passes over his face the older man dies. Turning her attention to Minokichi the Snow Woman looks as if she is about to do the same to him, but then she tells him she will take pity on him because of his youth, and spare his life, on the condition he never tell another person what happened (a detail nicely lifted from one of the more popular versions of the many stories of the Snow Woman in Japan). 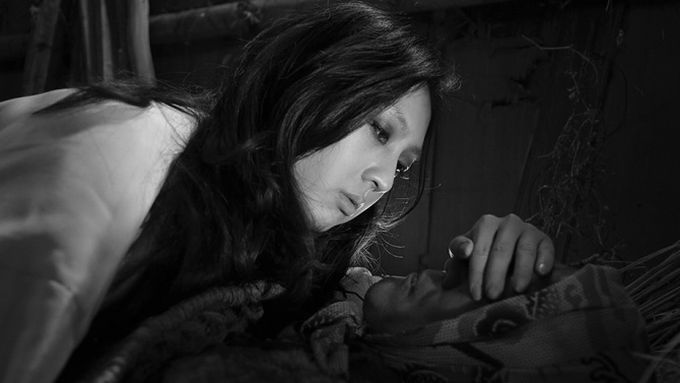 Moving to colour, it is now much later, the winters have departed the mountains, and Minokichi is returning from a hunting trip when he finds a beautiful woman alone on one of the paths. She asks the way to the ferry, and he takes her, inviting her to spend the night in the home of he and his elderly mother. The woman, Yuki, is beautiful but quiet and mysterious – she seems not to know where she came from, or of any family, but she is pleasant and both Minokichi and his mother are happy for her simply to stay with them, Minokichi slowly falling in love with her and asking her to become his wife. And for many years they are quite happy – Minokichi is curious about his strange wife, but as they live and love together and even have a child – a girl, Ume – he swallows this curiosity and seems content to live his life with wife and daughter in their small, barely changing village.

Of course it can’t last – Yuki has a familiar look to her and it is clear Minokichi has wondered if she is related to the Snow Woman he encountered (but if so how can she be here living as a human wife outside of her winter season?). He bites back his curiosity, partly perhaps because the Snow Woman warned him never to mention what happened on pain of death, but mostly, one feels, because he loves her and his daughter. But as the years pass – Yuki looks no older than the day she arrived – and their daughter starts to grow up, events start to happen around the village and mountain, strange deaths, the victims frozen…

This is such a beautifully crafted film – despite the supernatural elements and the folklore it is based on, it avoids the route of J-horror, instead creating a more chilling atmosphere in some places (no pun intended), like a Victorian ghost tale, perhaps. But mostly this is less a tale of strange spirits and more a tale of love and people and men and women, and how they can love one another truly but still sometimes simply cannot share a life, or at least not always, and sometimws can’t even communicate properly to one another (“husbands and wives are strangers to each other” Minokichi’s mother once tells him), a theme of Sugino’s other works too – she explained in a Q&A after the film that as a Korean-Japanese the idea of the outsider and not quite understanding one another is one she is very familiar with, while the tale itself reminds me of elements of the Selkie wife from my own country’s folklore tradition.

Snow Woman is a work of beauty though, the slow pacing and the almost timeless setting (a few items, like electric lights, hint at mid-20th century, but the village and clothing could be almost any time in the last few hundred years) allowing the audience to sink into the pace with the nature the villagers live closely to, and there is a real feeling of the turning of the seasons here (appropriately enough as some versions of the Yuki-onna associate her with seasonal spirits), the feeling of the village life in the shadow of the mountains and forest, the closeness of the natural world (and the supernatural Other World), told in some luscious cinematography and clever, precise use of soundscape until it feels less like watching a film and more like walking slowly through a dream. I can see why Sugino is making a name for herself in Asian cinema. 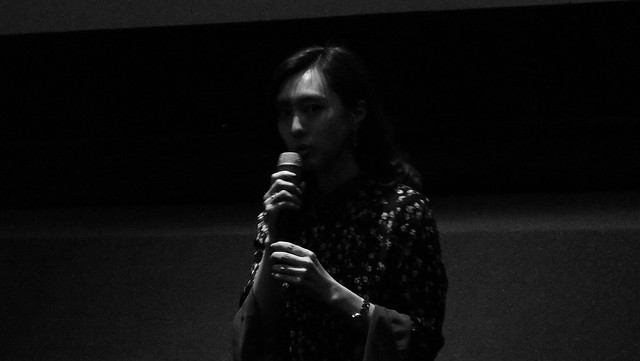