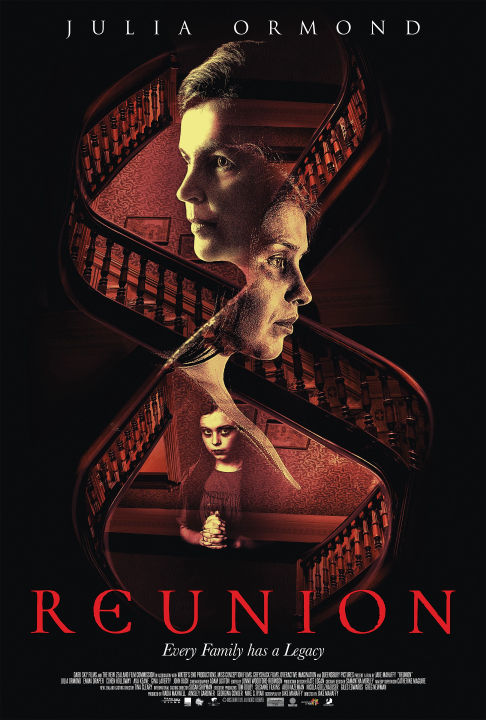 I went into this Kiwi film knowing very little about it, other than it had attracted some good word of mouth via the film festival circuit (which is usually a good sign), and that its small cast included Julia Ormond. Sometimes you just get a vibe about a film and know you have to have a look at it, and I had that feeling with Reunion. I’m glad I listened to that instinct, as Jake Mahaffy (he both wrote and directed) has created a superb film which takes in elements of the dysfunctional inter-generational family drama, the horror genre and includes some well-crafted disturbing scenes and imagery that will get under your skin.

Heavily pregnant, Ellie (Emma Draper), reluctantly returns home to the large, brooding, family home and her mother Ivy (Julia Ormond). It’s clear right away that Ellie really doesn’t want to be here, and that she and her mother don’t get along, but we get the impression she’s had little choice in where to go, having broken up with her partner and father of the child she is carrying. The large, old house still also includes her father Jack (John Bach), once an eminent doctor, now confined mostly to his bed or wheelchair and unable to communicate very much, a shadow of the dominant man we see in later flashbacks to Ellie’s childhood, or in the old VHS tapes of family life her mother still has. 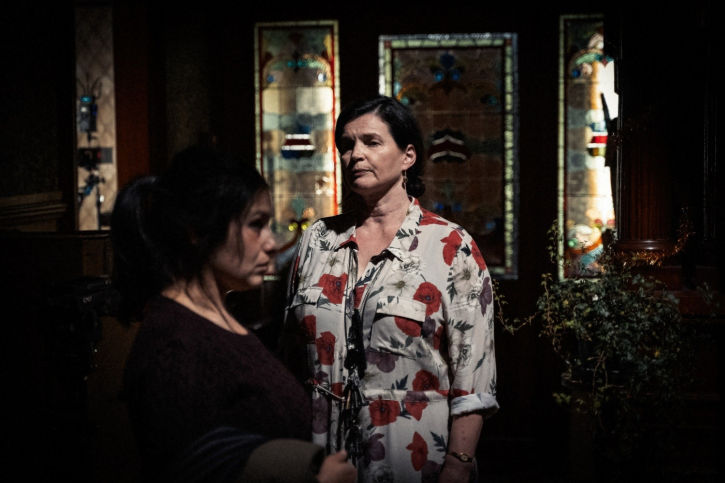 Reunion plays with the viewer, only giving us limited information – we have to try to discern what is going on and what the family dynamics are by the impressions we are given, then some flashbacks and old family videos, while later Ellie experiences dreams or visions of moments from her childhood, including a horribly traumatic moment over her deceased half-sister Cara. However, sometimes these visions and flashbacks are distorted, sometimes they play out differently; likewise when she argues with her mother the viewer gets the impression that Ellie is not really a reliable narrator.

We learn she has long-running mental health issues and has been on medication, and we don’t know if we can trust her version of events or if it is all the product of a very troubled mind, and Draper does a remarkable job in conveying a woman in turmoil, worried about impending motherhood, haunted by her past (which may or may not be as she recalls it) and constantly arguing with her mother; it is hard to know if you want to root for Ellie or to dislike her, and I think that’s a deliberate ploy on behalf of both Mahaffy and Draper; it makes the drama and the mystery far more intriguing and draws the viewer in further, I think.

Her mother seems at first to be the practical, put-upon mother who, with a sigh, just gets on with things in that way that mums often do: invalid husband, she looks after him and takes care of what needs done around the family house (it is filled with boxes as Ellie arrives, preparing to clear it out and sell if off, their shared history concealed inside boxes, a metaphor for their actual lives). Her troubled daughter who tried to make a go of it away from the family nest forced to return, yes, mum will sigh and then get on with trying to take her in hand too. 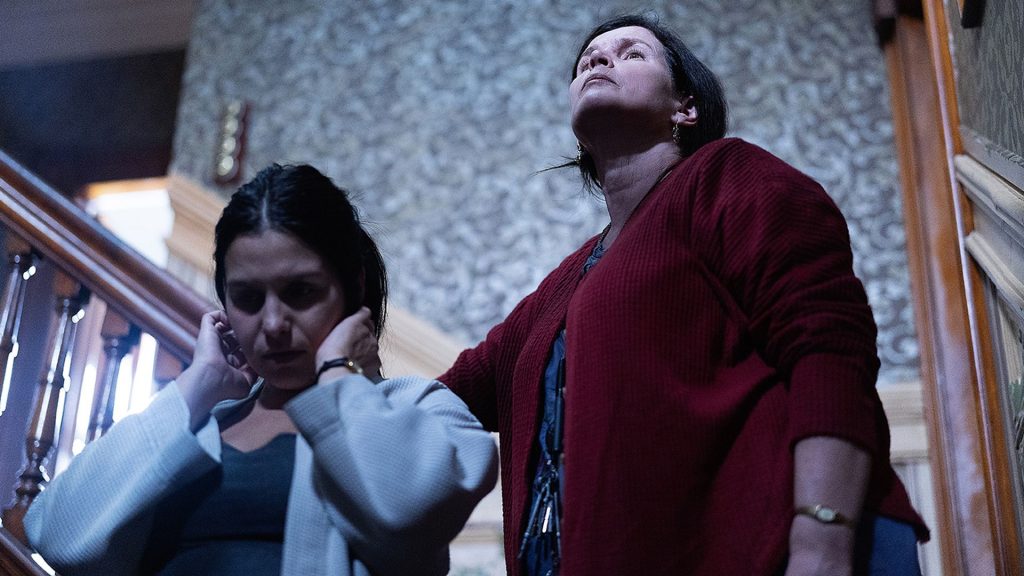 Except as the film progresses we start to question Ivy: is she really the selfless mother taking on care for an invalided husband and an adult daughter who can’t cope on her own? Or does she have other, hidden agendas? As she and Ellie argue we slowly start to move from thinking Ellie’s memories are distorted by her mental illness and trauma to wondering if perhaps she is right, or at least partly right, and perhaps Ivy’s matriarchal stance conceals some dark secrets, that perhaps it isn’t all in Ellie’s head and that Ivy is lying to her, even gaslighting her into believing something that isn’t true. It’s hard to know who to trust, who has the correct version, and perhaps neither of them truly do, and it makes the mystery all the darker and more intriguing.

Mixed through this Mahaffy makes great use of the large, old country house, a place which would have once been impressive, bustling and now houses only three broken souls, personal items boxed up to go, many doors locked (Ivy carries a bunch of keys with her everywhere she goes, a symbol of her attempt to control the narrative of their history as much as it is to control the house). Glimpses of things out of the corner of the eye, doors that move by themselves, glimpses of the ghost of Cara, still the child she was when she died (or is this vision also in Ellie’s troubled head?), it all induces a claustrophobic sense of unease, of something trying to pretend to be a normal family home but not really managing. Woven into this are some superbly disturbing moments, which I am not going to ruin here with spoilers, but suffice to say they added greatly to the brooding, disturbing atmosphere which lies over Reunion.

This is a highly effective, slow-burning, atmosphere-building horror-drama, rewarding the viewer with some deliciously disturbing elements that will remain in your mind’s eye; part family drama, part Gothic horror, part ghost story, part mental health tale, it takes all of these and creates an absorbing narrative, beautifully shot, with Ormond and Draper carrying the film. Highly recommended.