The Red Virgin and the Vision of Utopia, 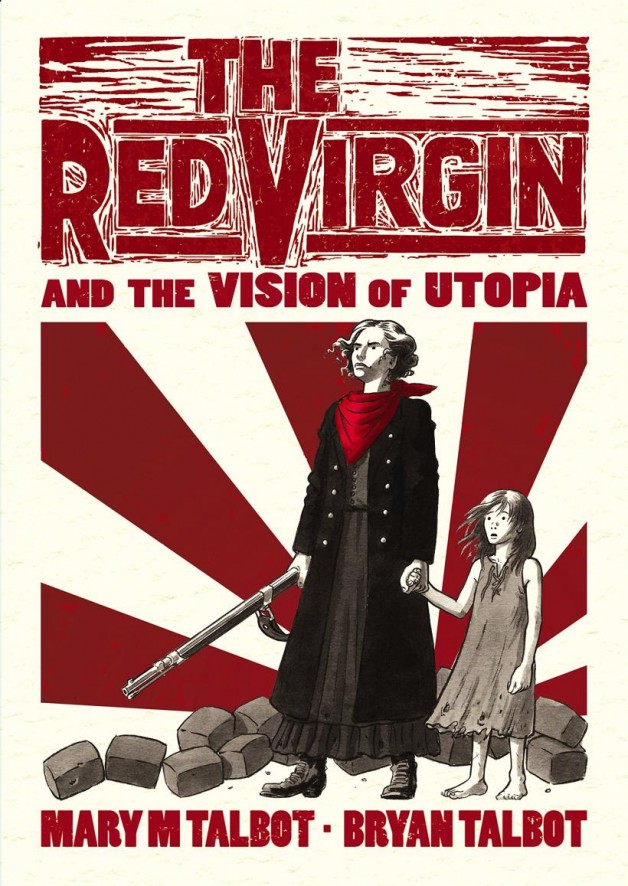 I’ve been eagerly awaiting this new work from the Costa Award-winning Mary and Bryan Talbot for month, and Mary and Bryan’s recent guest Commentary post whet my appetite even further. Was it worth the wait? Well let’s put it this way, I read it last week then found myself re-reading it twice over the weekend on a train trip back home; it’s one of those books that very much deserves another pass because there is so much going on here, between the history, the politics, the biography and, of course, the detailed art, that it rewards you handsomely for re-reading. 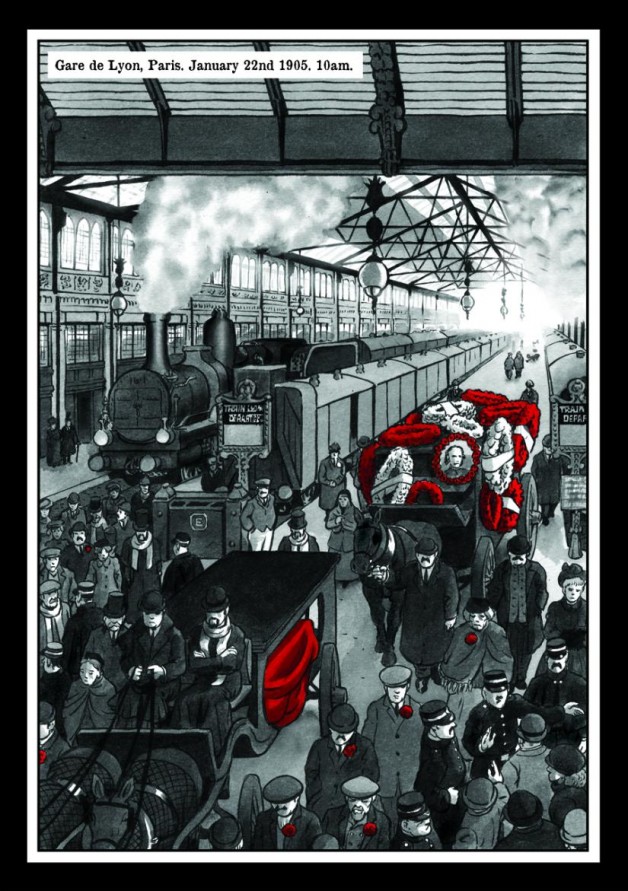 The Gare de Lyon, Paris, January 1905; our first glimpse of Louise Michel, political agitator, feminist, revolutionary, fighter for equality and a dreamer of a better, fairer world. And it is her funeral, a full-page, appropriately with a black border, mostly black, white and grey tones, save for the deep red of the funeral flowers and the red of revolutionary flags. Thousands have turned out for the final journey of Louise, and caught up in the busy procession and arriving American writer, herself no stranger to the ideas of Utopias or the fight for more equality, Charlotte Perkins Gilman, arriving at the station to be met by young Monique. Gilman is in the middle of a European lecture tour, and while they wait for the procession to pass Monique explains that the funeral is for Louise Michel “She spoke out for the people. We loved her.” Gilman recognises the name – the two had met on a previous lecture tour and spent a pleasant evening discussing Utopian fiction. Monique offers to tell her more about Louise, and this is the clever framing device which leads the reader into the story of this remarkable, revolutionary woman. 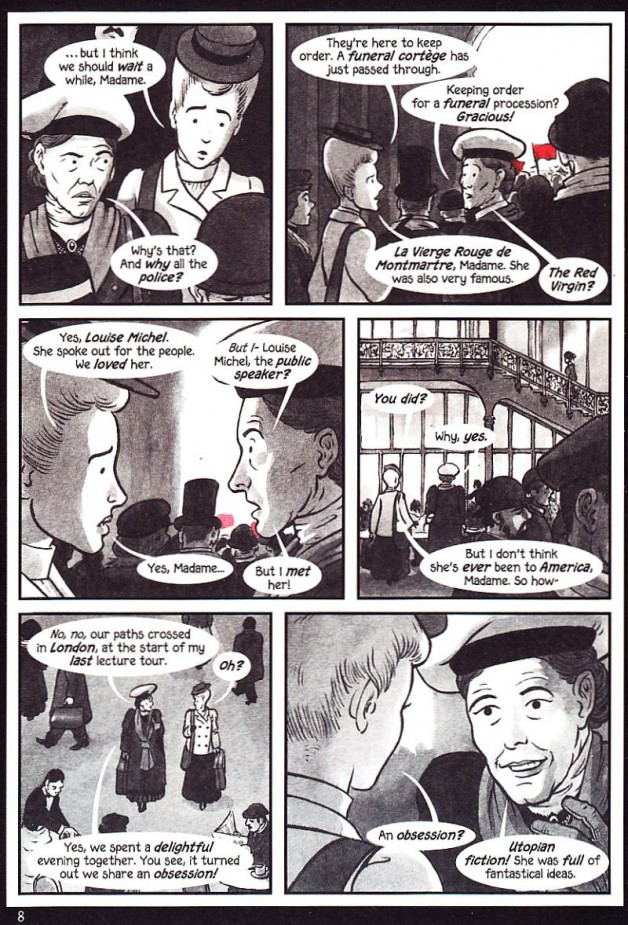 It’s snowing heavily in the run-down streets of Montmarte on a December evening, 1870. Montmartre today still has a slightly different look and feel to it from much of the rest of central Paris, but back then it was more like a tumbledown village. A full page gives a wonderful impression of the place, a caped figure shivering through the snow, you can almost imagine the soft runch-runch-runch of footsteps in the snow and the quiet, damped sound that comes with the snow. Inside a group, mostly women share what little food they have, huddled around a lantern, its glow uplighting their faces, including the face of Louise, a face that combines compassion, intelligence and strength. These are people in a poor district who have little at the best of time, but as the Franco-Prussian War and then the siege of Paris drags on (these are events which would lead to the creation of modern Germany after France’s defeat). 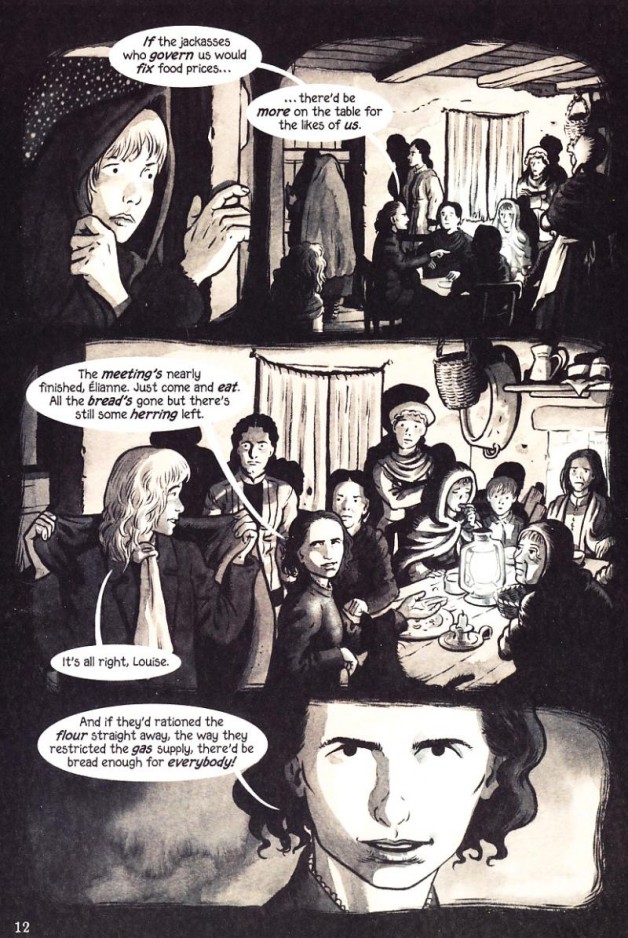 But despite the biting winter outside, the lack of food and heat, the war, the poverty, this is a warm scene, these are people who are friends and neighbours, people who help and support one another. And while this helps introduce Louise and the conditions which helped drive her desire to change the world, it also provides some beautiful little details – a cat happily snoozing on a woman’s lap, and its indignant expression when she leaps up – which brings the scene to life, makes these not just characters in a tale but real people, people we can recognise and empathise with. And that makes this more emotional, personal, relatable, not a remote moment of history, but events involving real people, and that enriches everything which follows.

And what follows… Ye gods, what an amazing life. I knew of the Franco-Prussian War, of the changes it lead to in French government and had heard a little about the Paris Commune. But I hadn’t heard of Louise Michel. And after reading (and re-reading) this book I’m wondering why I’ve not come across her story before. Perhaps it’s one not widely known outside Francophone histories. However that just added to the pleasures of this work; that wonderful, warm feeling that comes from having both an engrossing story and learning something new and fascinating. Our modern society is still hideously unfair and unbalanced – we need look only at protests in recent years over the ever-increasing gap between rich and poor and the influence and control the former accrue to themselves, or the way people – even in supposedly “advanced” cultures are mistreated because of the colour of their skin, their gender, denied opportunities for not having gone to the “right” school… And here’s this woman in a poor arrondissement of Paris in the 1870s fighting – quite often literally – for education for all (and girls to be taught the same as boys), proper political power from the people, ensuring resources of nations are used for the betterment of their people, not just a few at the top…

The Talbots take us through the heady days of the Commune, moments of brief triumph before the brutal re-imposition of Almighty Power (a government and army that couldn’t defeat the invading Prussians but was able to turn its guns on its own citizens). Thousands are killed, many survivors imprisoned or transported to the distant colonies. And still Louise Michel doesn’t stop fighting, she doesn’t stop studying and arguing and dreaming. Even exiled to the far side of the world she takes it as an opportunity to learn more, to expand her horizons. In a period of high imperialism she instead talks to the natives, learns their ways, language, culture and in turn teaches their children just as she teaches the children of the French exiles in her makeshift school, seeing in the colonial mastery over others the same blind, greedy power which she fought in the streets of Paris. 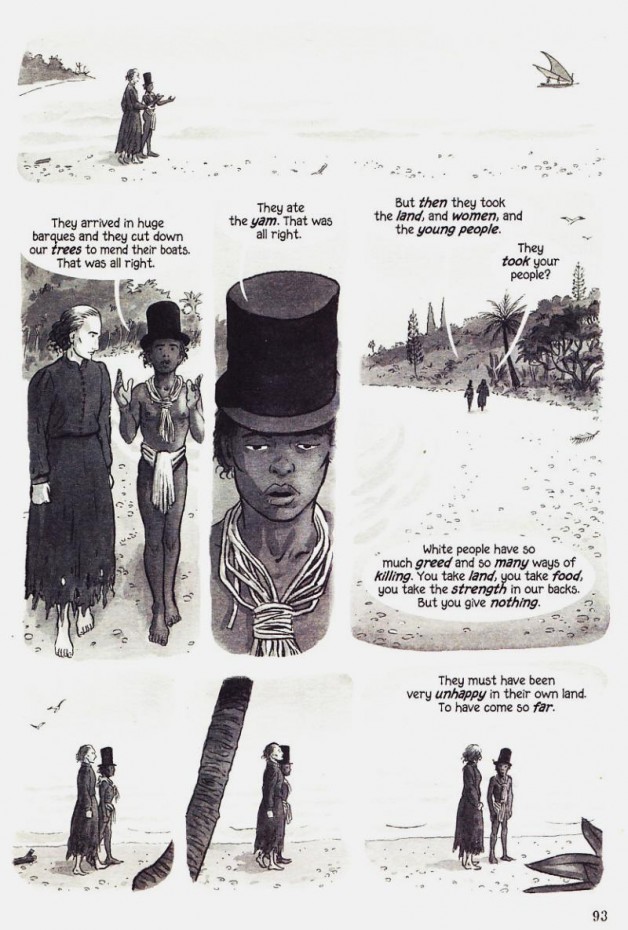 Having young Monique, then later her elderly mother (a friend of Louise Michel’s, and one who stood alongside her) telling Gilman their account of this remarkable, revolutionary woman is a wonderful way to frame Louise’s story, leading us in easily to the events, adding human depth and emotion to these events, and it is little surprise given Mary’s academic background that the work comes across as well-researched and boasts an appendix of notes and sources which are also quite fascinating. The artwork throughout is beautiful, as you would expect from one of our masters of the medium, from subtle use of colouring around the pages (jet-black for the funeral and opening, a much lighter page tone for the scenes in distant New Caledonia, intimating the brighter light quality.

There are some memorable images – a line of soldiers marching but with their loaves impaled on the bayonets of their hoisted rifles (something thrown up by research but which makes such a lovely visual image), to the revolutionaries ripping up the street cobbles to erect barricades, in true, traditional Parisian fashion, sudden “terrible beauty” amidst the horror as erupting cannon fire causes the spring blossoms to rain from the trees, a ghastly set of double-page spreads showing the bloody aftermath of the brutal suppression of the Commune, dark, dark, dark pages of bodies and the suffering of the survivors, seen as if through falling soot and smoke from gunfire, the bright red normally reserved in the book for the flags and Louise Michel’s scarf here given to blood of ordinary citizens pooling in the Parisian streets. Coming almost midway through the book those pages are sombre, shocking and a reminder of the bloody cost that has been paid time and again by those trying to change the world. 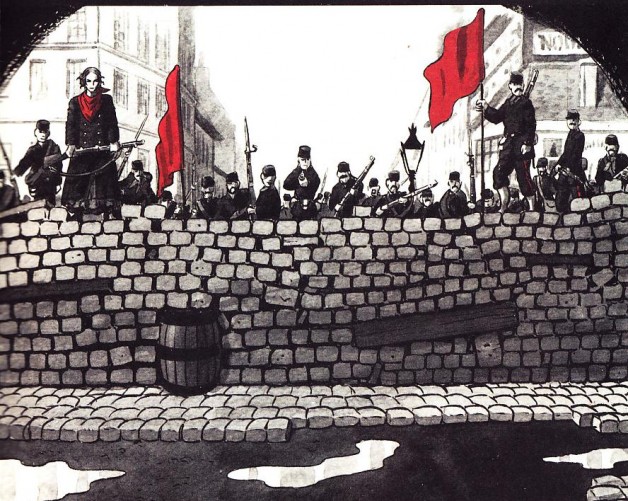 This is an utterly fascinating book, a beautiful meshing of history, story and art, telling the story of an inspiring woman and of causes that are still far, far too relevant in our own modern, troubled world. There’s a lovely mixing of the Utopian science fiction of the period, of that dream that all of this marvelous new technology coming out of that period, and what will come later, will be used to finally free all of humanity from drudgery and suffering, to essentially create something not unlike the Federation in Star Trek, and a number of references are made to the SF literature of the period and how it helped inspire those dreamers wanting to change the world (as many tales today still do, and thank goodness for them, because what would we do without those dreamers pushing the rest of us to try and make things a bit better, even if we never quite get there, but we keep stepping closer at least). And this also allowed Bryan to indulge in a nice scene showing one of those imagined Victorian SF futures, a little visual treat. 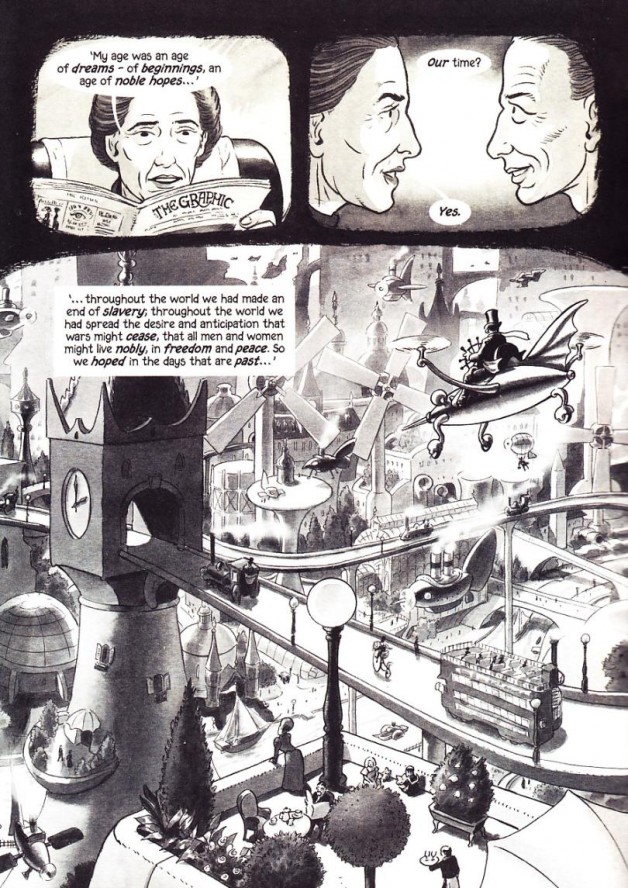 In a lovely touch I was moved to see that Mary and Bryan had dedicated this book to another writer of Utopian science fiction, the late Iain M Banks, who I imagine would have heartily enjoyed discussing Louise Michel with the Talbots over a good dram. Powerful, moving, thought-provoking and fascinating. It’s only May and I already know this will be going straight onto my Best of the Year list come December.

This review was originally penned for the Forbidden Planet Blog. Mary and Bryan Talbot will be at the Edinburgh International Book Festival on the 27th of August