One Hundred Nights of Hero, 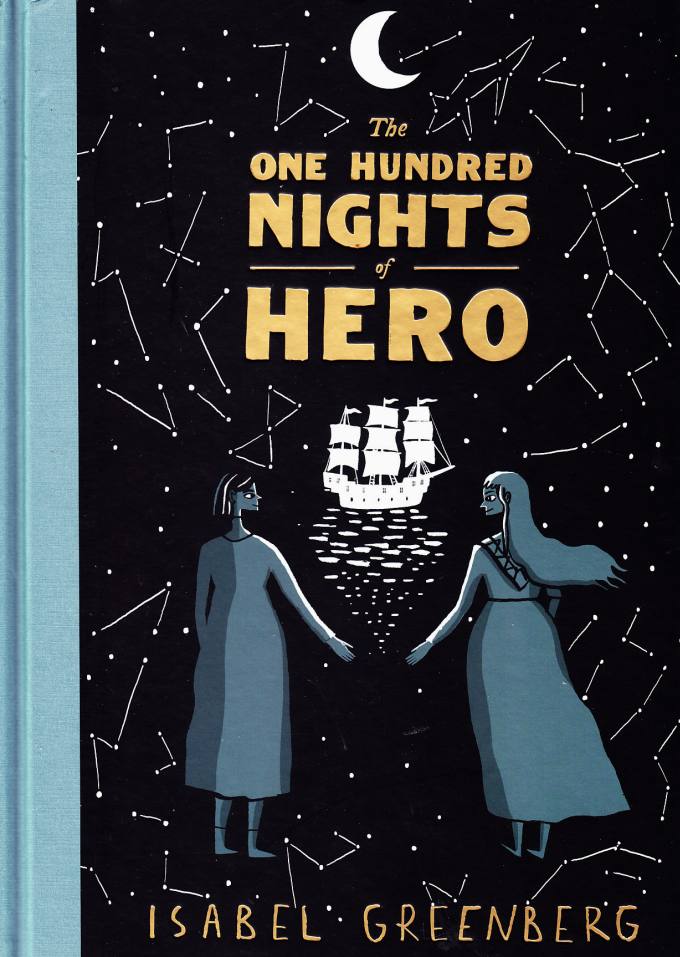 I’m tardy with this review, I meant to have it up a couple of weeks ago or more, but book, work, life and task juggling got in the way and I was quite adamant that I was not going to rush through One Hundred Nights of Hero. No, this is a book to be taken slowly, enjoyed, savoured, pause frequently to think about the ideas, memories and thoughts it stirs up before returning to the next part. This is a book to take your time with and it’s perhaps a good idea that it is published as the longer nights draw in over autumn, perfect time for drawing the curtains, turning on the reading lamp, curling up in the comfy chair by the fire (and a nice drink to hand, of course) and lose yourself in the pages…

After Isabel’s wonderful (and Eisner nominated) Encyclopedia of Early Earth (reviewed here by Richard) I think it is fair to say many of us had high expectations – no doubt the praise heaped upon that book and its success was welcome to the author, but it is also a burden, a high bar to set on a creator. Fortunately Isabel has taken that challenge and surpassed it admirably. I think I fell in love with this book almost instantly, within the first few pages – it’s hard not to love a book which commences with a page showing the globe and the legend “in the beginning was the world”, then you turn over the page to reveal the very Early Earth, depicted in a lovely faux-primitive style, somewhere between pictogram and Lascaux-like cave painting,s and the words “and it was weird.” 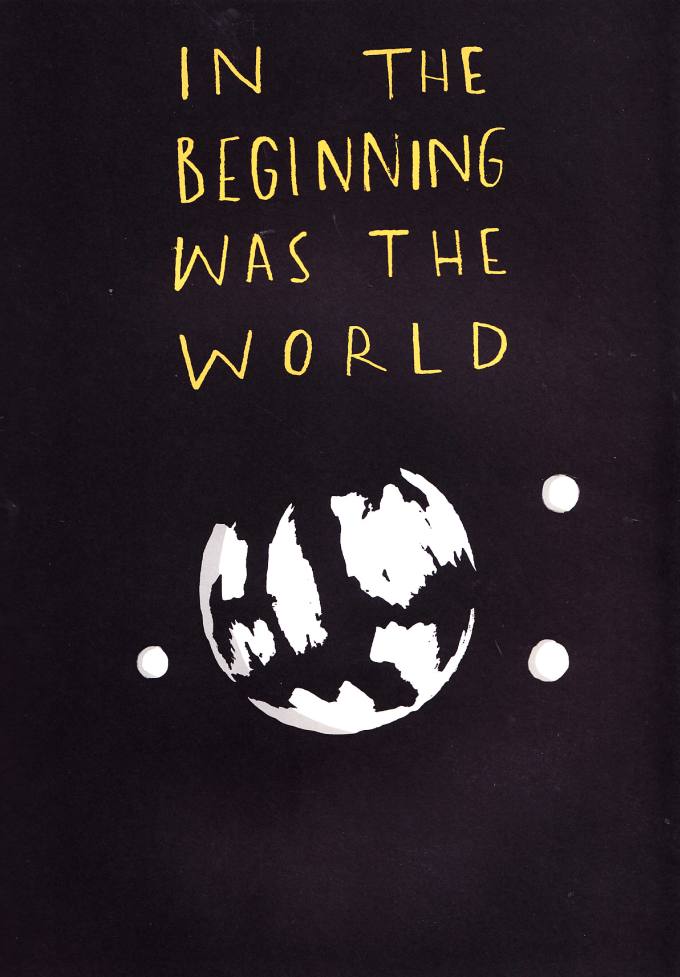 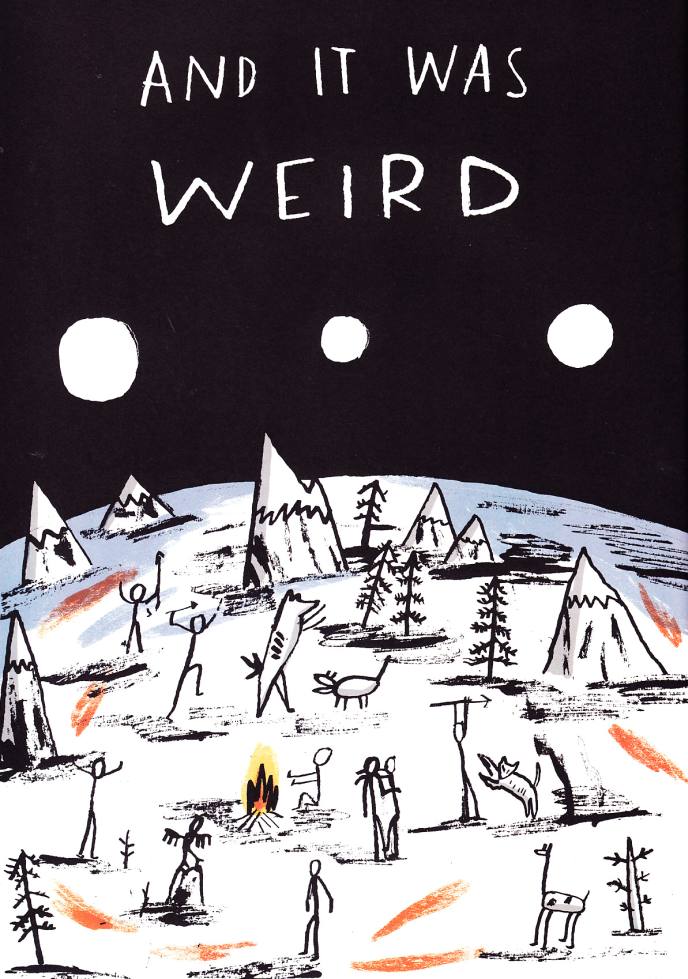 We meet the god Birdman and his children, the boy Kid and his sister Kiddo. And while Kiddo and Kid are also gods it is clear, as it usually is in most pantheons, that there is a chief god – in this case Birdman. And again as with many ancient pantheons deities, especially the ones at the top of the heap, are jealous, capricious, insecure and over-controlling creatures (Birdman is mostly depicted with his beak wide open – always something to declare, usually over the top of anyone else; he’s a bit of a blowhard and egomaniac, not to mention a Champion Mansplainer). And after fiddling around with the rest of the universe of creation, he takes notes of a smaller creation – a world, the Early Earth – that Kiddo has crafted and peopled with beings she calls “human”. She’s fascinated by these small beings who live and love and eat and sleep and grow and die, and is content to watch over them. Birdman, however, considers this an affront – he wants changes and principally he wants these small being to worship him as he effectively co-opts Kiddo’s creation.

But while the nature of religion, Birdman, Kiddo and the history Early Earth recur through the stories (not least in the horrible Beaked Brothers, the religious fanatics from Birdman’s church who enforce dogma and societal norms), the main part of this quite substantial tome (it is a pretty impressively large work, and it comes in a very handsome hardback with cloth-bound spine and metallic, embossed lettering) is, as you may guess from the title, inspired by the classic Tale of a Thousand and One Nights. In the place of clever Scheherazade we have Hero and her friend and lover Cherry. Heroes across the millennia may sometimes rely on a strong sword arm, but the smartest ones rely more on their intelligence and wit (Achilles and Ajax may have been the strongest warriors in the Iliad, but it was crafty Odysseus who outlived them, despite his diverting problems). And what of women, kept “in their place” in a rigid society, little say in who they will be married off to, forbidden from learning to read (because we know from history when you let people read they get all sorts of ideas for themselves, and that would never do). Those heroes really must rely on instinct and wit and intellect, not brute strength and a sharp sword. And compassion and understanding. And friendship. 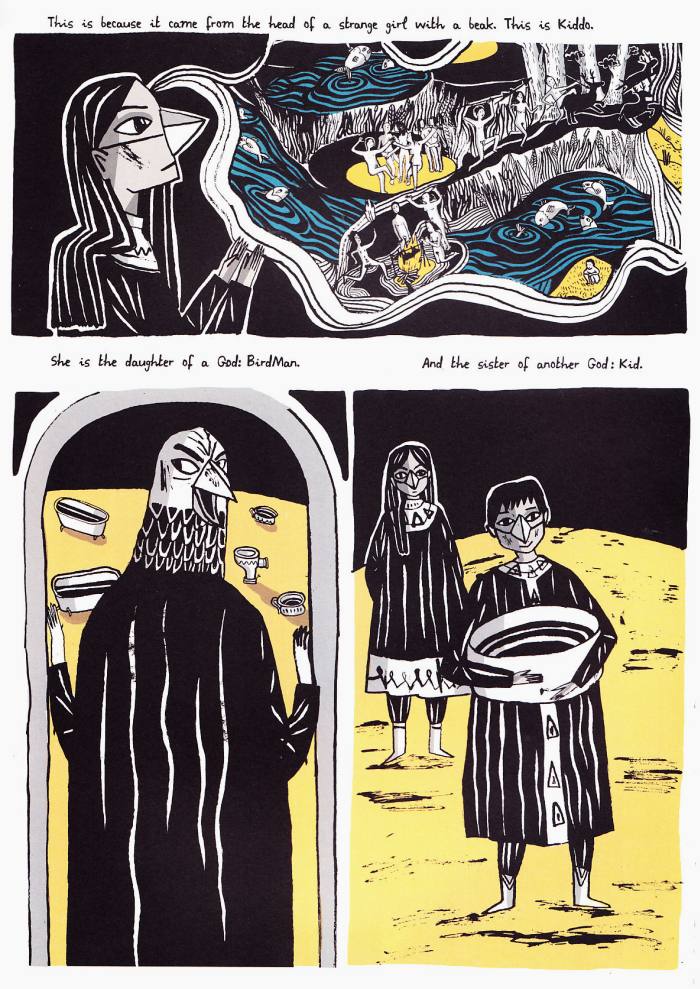 A foul wager by two very, very silly men (who sadly, despite being fools and bigots hold power over the lives of their womenfolk), Manfred and Jerome discuss women, Manfred in particular proving to be especially loathsome, one of those men who sees all the faults in everyone else (especially women) but not his own myriad of failings. And their discussion of “worthless” women sees them lay this aforementioned wager – Jerome is so sure of the virtue and fidelity of his young wife (who seems more like a possession to him than a partner) he bets that the vile Manfred cannot seduce her while Jerome is off on business for a hundred days and nights. The art here is fabulous, most especially the way Isabel depicts the expressions of these two men – a scene showing Manfred leering (for all his ranting about how no woman is worthy, he is clearly obsessed with them, not an uncommon pairing of characteristics) had me laughing out loud.

While the wretched and loathsome Manfred sets forth cockily to win his bet (and it matters little to either man about the woman they so cavalierly use for their sport with one another) it is the key to the spinning of a quite wonderful series of tales. Cherry, the demure, chaste and obedient wife he is to try and seduce is actually far smarter than her husband (and Manfred) and she gets her passion elsewhere – from the eponymous Hero, her friend who poses as her maid but is really her lover, both struggling to have a loving relationship and to also nurture their intellect and learning in a society which would condemn them for both. And it is Hero who determines to stave off Manfred’s unwanted advances through that tried and tested method of the spinning of enticing tales, stories that captivate and compel. Stories that stop at break of day but oh, Manfred needs to hear the end, so he keeps pausing his lustful advances to hear more. And more. And, well, you get the idea. 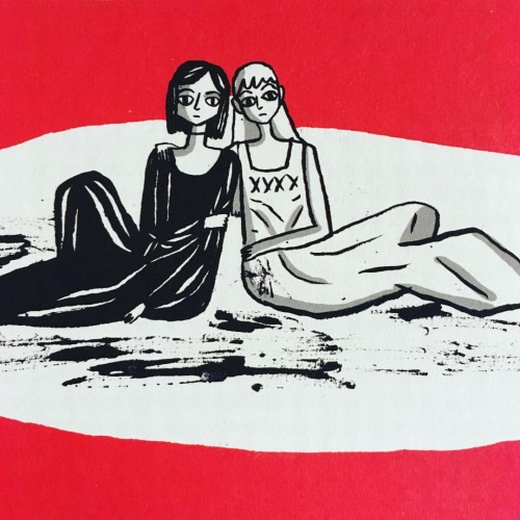 It’s a lovely way to frame these stories, and no, I am not going to go into each of the tales Hero spins over the hundred nights to save her lover from Manfred, there isn’t space enough and besides, I’m not going to ruin it for you. But take it from me, they are enticing, lovely and often oh so emotional tales, taking in both love and loss, death and life, finding but also losing, and mostly with a very feminine perspective, for many of these are the stories of women, women forbidden to read and write, to touch books, so some of them take it upon themselves to acquire stories which they learn by heart and pass on, both by word and by the craft of tapestry. An all but invisible web of stories being shared in secret telling stories of love and romance and triumph and betrayal and bigotry and hatred. Of moons falling in love with humans, of sisters parted by duplicitous lovers, of princesses and the mirror fantasy worlds they escape to from a controlling king and father. 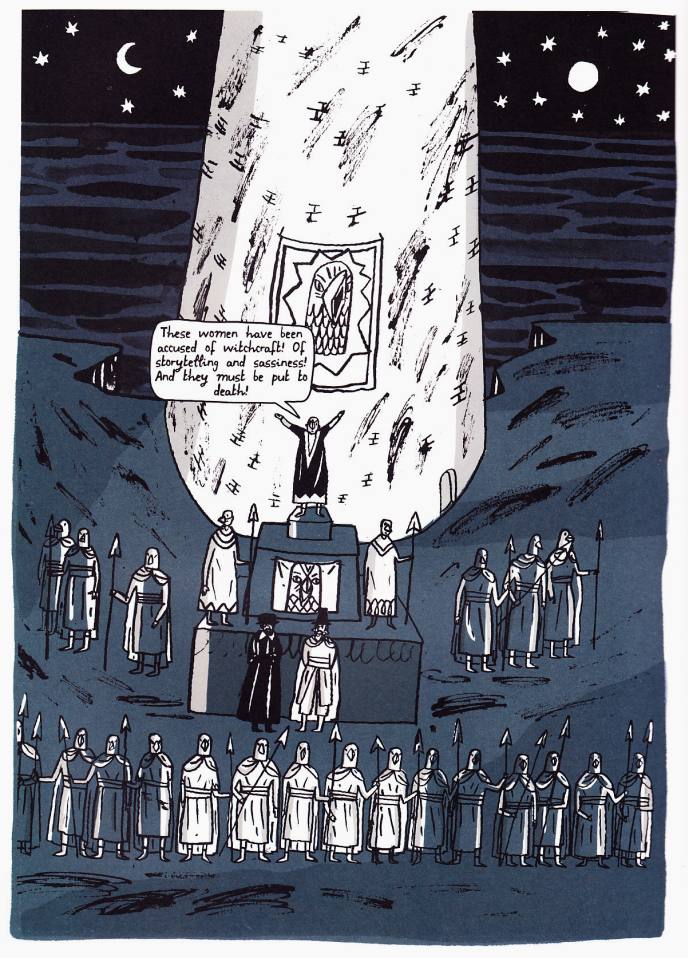 It’s a beautiful kaleidoscope of stories, each building atop the others for a satisfying cumulative effect, each enhancing the others. There are terrific touches in both story and art – little background scenes such as the guards set to watch over Hero and Cherry becoming totally besotted with the stories they overhear them telling (which of course they tell their friends and wives and children, who then tell them to others, because stories are contagious, in the nicest way). Or simple but hugely effective techniques, such as a new wife, her expression rapt and loving as she gazes at her new husband, but while his face points towards her we can see Isabel has his eyes roving, already looking away from his adoring wife for another conquest. It’s just one tiny touch in one panel, but it’s indicative of the care and craft in this work. 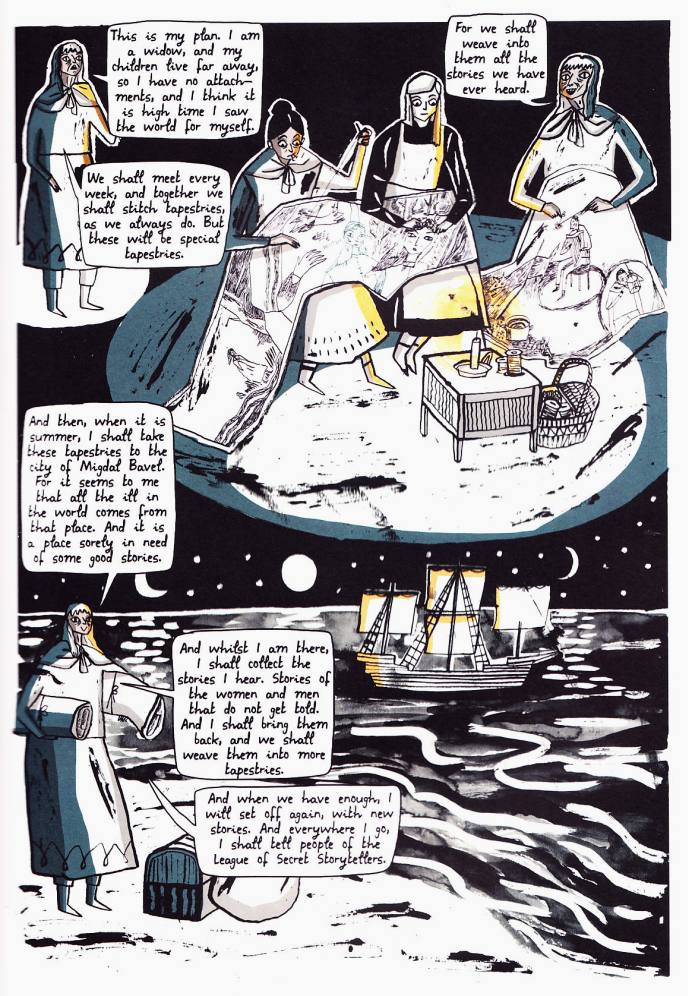 There is a serious subtext here about the way men and women see and treat one another (especially the way many men have treated women, sadly something that is, yet again, in the news for all the worst reasons – some men, it seems, are incapable of growing up and evolving, and boy could a lot of them benefit from these stories, if they were open to them, that is). But it’s also a book of adventures and wonders and romances and hopes and regrets and humour (and sassiness!) , all wrapped in some lovely, lovely artwork. It’s a collection of stories which come together to form a larger narrative and set of shared ideas and themes in a quite magical way, and it is one of those books you just know you are going to find yourself revisiting again and again (always the mark of a truly good book). I think come December this will be a very strong contender for one of my Best of the Year selections, an utterly wonderful book that I cannot recommend enough.