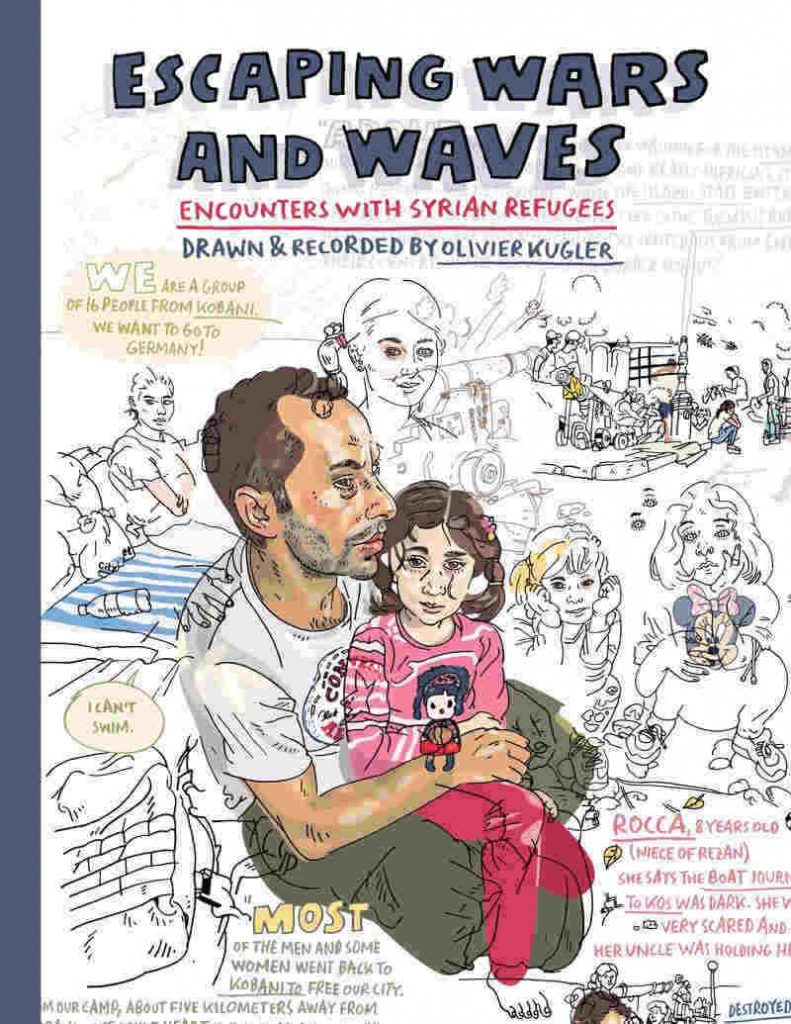 “The children are nervous… When they hear any noise, even if you only knock at the door, they can get very afraid.”

The world is currently experiencing its one of its worst refugee problems since the Second World War, with masses of people being displaced through war, famine, economic poverty and more. You’d hope by this point, in the 21st century, humankind would have learned and moved on from this sort of wretchedness, but no. And apart from the physical and practical problems of countries coping with a mass influx of often desperate refugees, there are those who shamelessly use such an awful situation to whip up xenophobic hatred, turned to their own cynical purposes to garner political and popular support. German creator Kugler does something which is desperately needed, puts a very human, very personal face onto some of those refugees.

We see in the news regular statistics – this many drowned in a ricket boat crossing to Europea, this many in camps, this many asking for asyulm in countries that are worried about the impact of so many so quickly, even in nations who have traditionally been open and inviting. Kugler does not pretend to have answers to these enormous practical and ethical problems, what he does here is give us people, not statistics, not some politician’s ideologically driven rhetoric. People. Men, women, kids, families. People just like us, like our friends, our families, our neighbours, our communities. 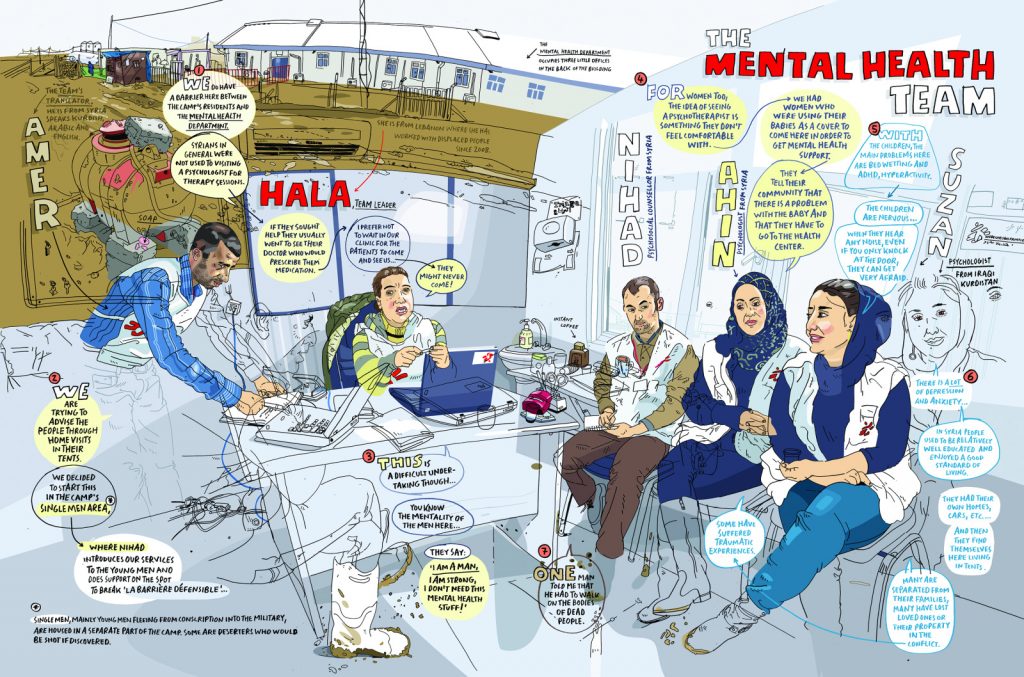 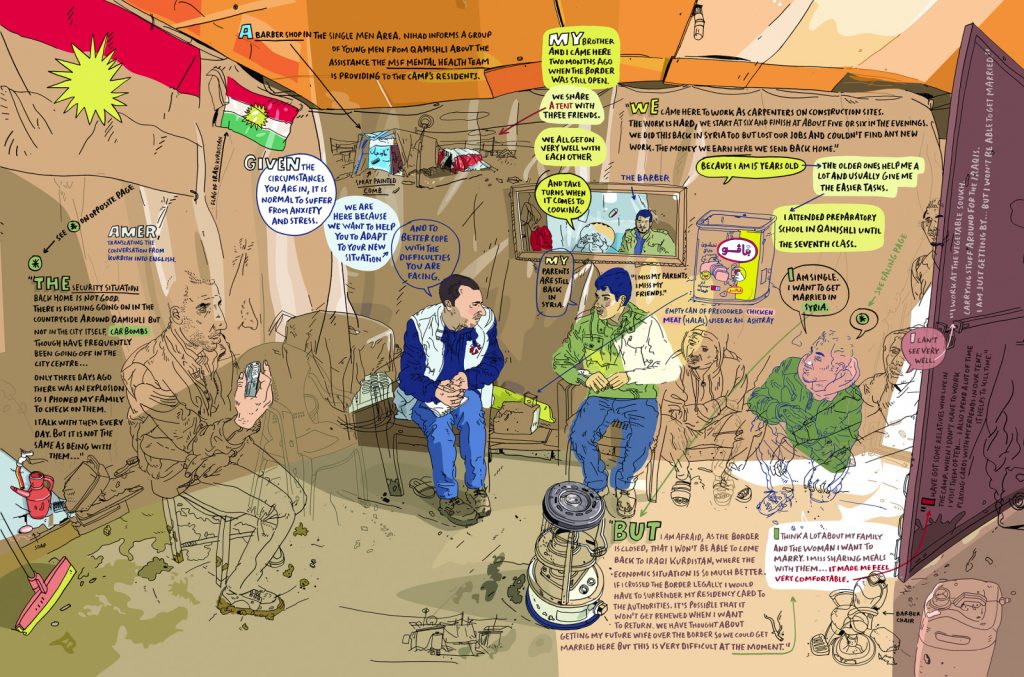 The images we see from the news, even by the most well-intentioned journalists, often gives a distorted view. We see people grubbing in the mud of a camp like the infamous Jungle in Calais, or an overflowing city of tents in Kurdistan, and those images can give us the wrong impression, make us judgemental in the same we it is too easy to be when seeing someone begging or sleeping rough on our own city streets. We don’t know the stories behind those images, behind those people, what they have endured, are still enduring. Kugler gives us that, and does his level best to do so without interjecting himself – there is a very clear desire by the author to make sure that as much as possible he presents these people in their own words.

Many of these refugees are well-educated folk from a decent background, college-educated with degrees, a nice family, pretty home (one speaks movingly of missing their little vegetable garden by their home, where they grew oranges and lemons right by the house, home now gone, even the trees that grew for years ripped up by the uncaring war). There are teachers here, lawyers, computer specialists, nurse, doctors, even psychologists like Suzan who helps MSF (Medecins Sans Frontiers, the same charitable organisation many of you will remember Guy Delisle’s wife working for in his comics travelogues).

Kugler goes to various locations to talk first hand to people who have had to flee Syria, some because the war came literally to their doorstep (if they were lucky they all escaped with little more than the clothes on their backs, if they were unlucky they escaped after shells had killed some of their family in front of them), taking us from Kurdistan to the Greek island of Kos, to the “Jungle” camp in Calais, to Britain and Germany where some of the refugees have been allowed to settle, the most fortunate reunited with other family members already there, he takes us from those struggling in overflowing tented camps where charities and local authorities are overwhelmed by the sheer numbers, to those trying to make a new life for themselves in Europe. 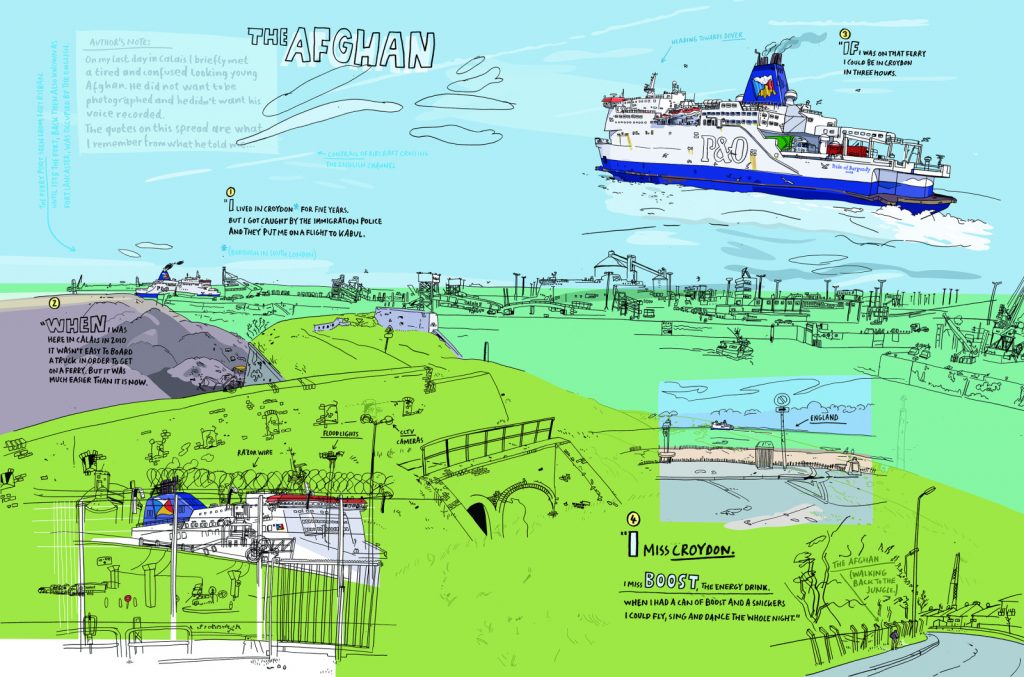 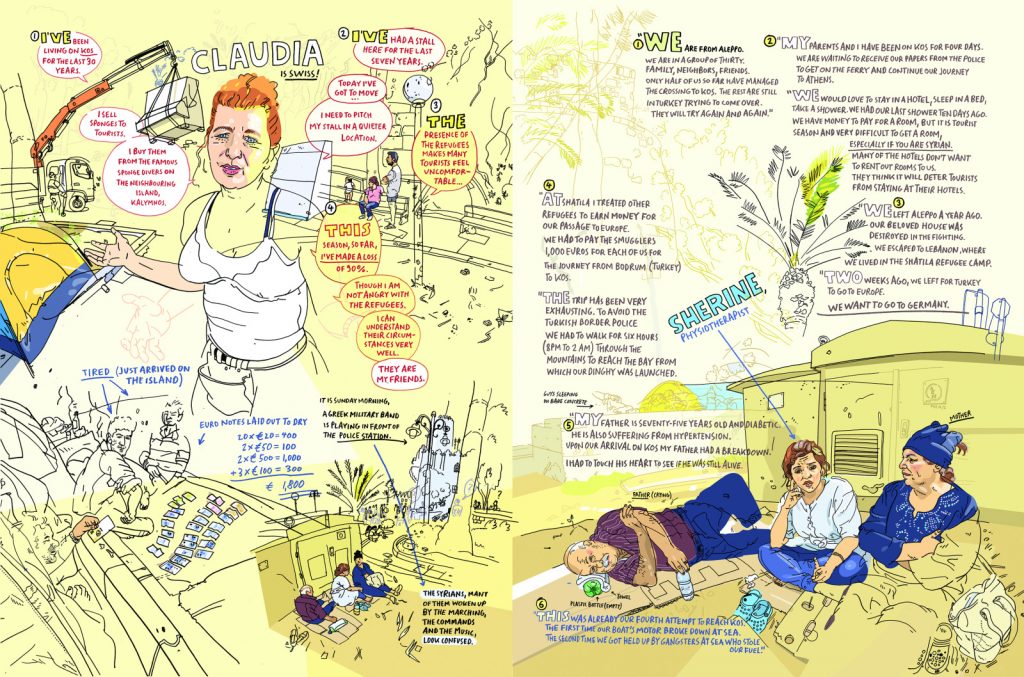 It’s often heartbreaking, especially hearing from the children. Not for the first time I was reminded of the late, great Spike Milligan’s war memoirs, from the WWII Italian campaign when they came across a village where a child had become a casualty of the fighting; “the adult world should forver hang its head in shame at what is has done to children” commented Spike, and he wasn’t wrong. But while much of this is, as you might imagine, very upsetting, this is balanced with that quality we all need, especially these days: hope. We see the fortunate make new homes for themselves; they miss their old hometown, their country, but they are relieved to be in a place that is safe, where their children can go to school and thrive.

Several times the kids briefly forget the traumas their young eyes have seen and grow excited like any other child, telling Kugler what they want to be when they grow up and leave school (“a nurse!” “an engineer!!”). The fact they can overcome those traumas and think about a future again, to play and dream of being a doctor or an engineer when they are older, is a wonderful thing to see in those children. In an especially touching scene Kugler visits some in Germany – the kids of the family now go to his old school. 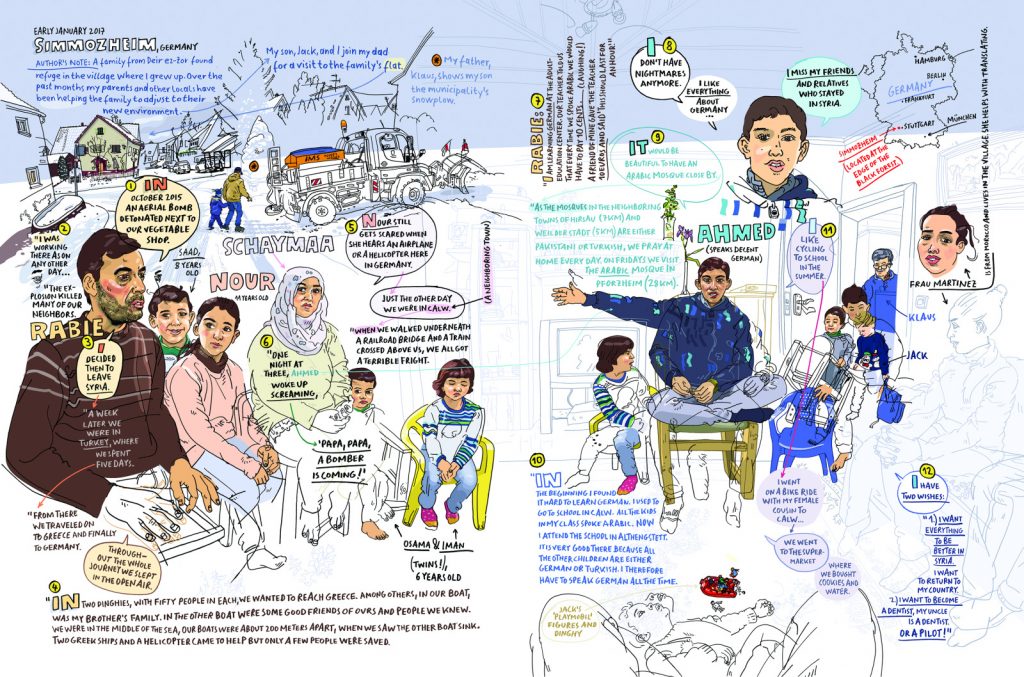 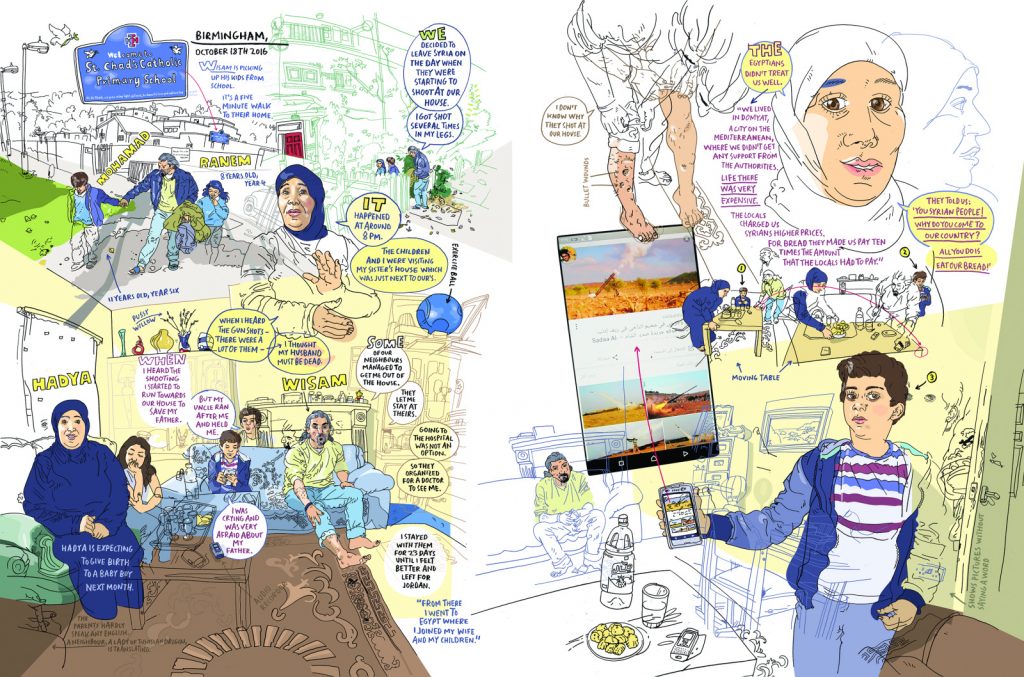 Rather than a series of sequential panels, Kugler opts more for (mostly) coloured sketches taking up an entire page, or sometimes running across two pages, with text telling the person’s own story, rather than speech bubbles. Thoughtfully these chunks of text running around the art are numbered to make it easier to follow around the art layout. The sketches themselves tend to focus on characters central in the image, they are depicted with the most detail, the colouring, and most importantly, the expressions, coming through clearly, while around the periphery details and people there are sketchier, not as detailed, perhaps not even coloured in.

It felt as if the artist was using this approach to hint that for every couple of people he talked to, centre on the stage of the page, there were so many others around the edge; he can’t talk to them all but he can infer to the reader that they are there and the too matter. There are small details added in like a little arrow pointing to something small in the background and text explaining “chocoalt bar”, “plastic flowers”. It all serves to normalise these unusual scenes, the bric-a-brac of everyday life scattered around just like it would be anywhere.

There is also a remarkable amount of hospitality and welcome shown here by many refugees. As Kugler explains not everyone wants to be drawn or photographed, understandably given their circumstances (many still have family back in war-torn Syria and fear anything they say could cause trouble for family still there). But many, even those in the regugee camps with so little to their name, still do their best to offer warm hospitality when he visits. One man who had managed to make himself a wee business while stuck in the camps, running a small stall selling coffee, drinks and other snacks sees him standing in the cold and mud waiting on his interpreter to arrive, and offers him hot, sweet coffee, refusing payment. Others, in tents or in homes in Birmingham or Simmozheim, Kugler’s home village in Germany welcome him into their homes, be they tents in a camp or actual homes in the country managed to get asylum in.

Even for those settled in Europe the scars are horribly visible, both physical (one man shows his bullet wounds), others mental (children still scared when they hear a helicopter passing overhead, or the sudden roar of a train going over a bridge as they walk under it. Again I was reminded of Milligan, how his nerves shattered by the war, he would find himself in tears of sudden fear just from the sudden sound of a car exhaust backfiring). God knows what some of them have been through – despite many opening up to Kugler, it’s obvious this is barely scratching the tip of the iceberg. We all know how bad a place we can be in when dealing with emotional upsets – illness, losing a loved one – and how emotionally hard it is to cope, and that is us with our home, rest of our family and friends around us. Imagine having those kinds of traumas and losing your home, the town you lived in destroyed, having to flee your own land and throw yourself out hoping desperately for help.

That’s what Kugler does so well here, he enables us to see these people not as a news story, not as statistics, not as demonised figures, but to show us people, people we can see ourselves in, we can empathise with. And from empathy comes compassion and more understanding, and god knows our world desperately needs those right now. This is not an easy read, it’s emotionally hard-going, but very worth making that effort; it’s a much-needed riposte to the demonising and hatred we see poured at some refugees, and a reminder of that old saying, there but for the grace of God go I. How swiftly could everything we think is normal be destroyed just as it was for these people? Home, work, school, going to a restaurant, the movies, day out with the kids? Suddenly all gone. And how desperate would we be, how much would we rely on our fellow humans to show kindness if it were us in such a situation? No, this is not an easy read, but it is, I would say, a very important read.