Aardman, An Epic Journey, Taken One Frame at a Time,
Peter Lord and David Sproxton, with David Gritten
Simon & Schuster 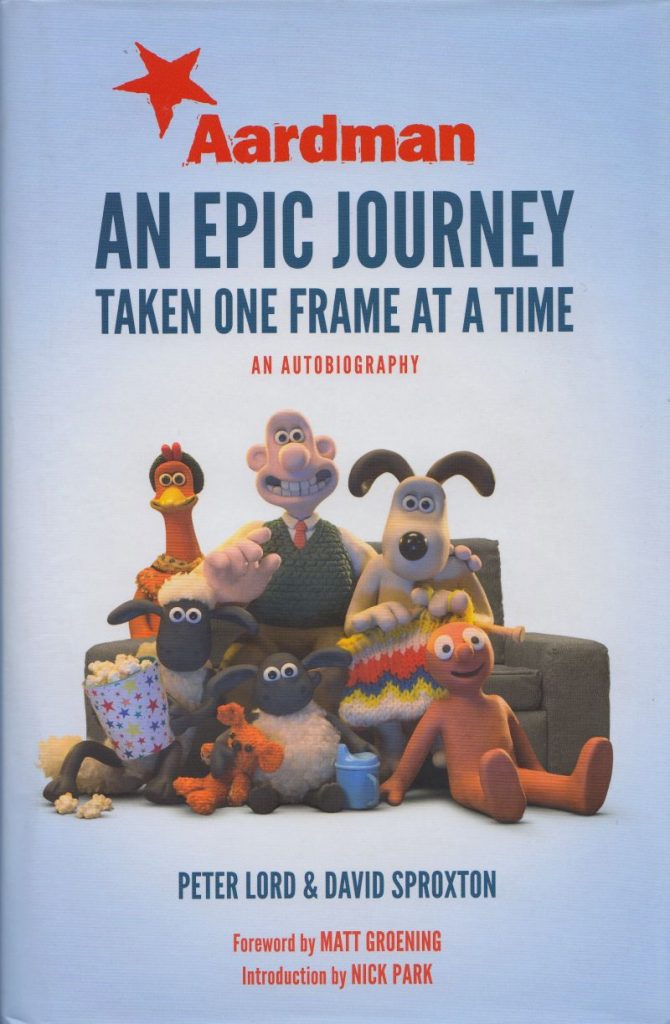 Aardman Animation has, rightly in my opinion, become a national, and indeed international, treasure, a bastion of quality animation – most especially the fine art of stop-motion animation – all the while maintaining their warm, Indy, quirky, lovably eccentric British humour and sensibilities. Aardman, An Epic Journey follows the two founders, Peter Lord and David Sproxton, across more than forty years of history, and what a story it is – from schoolboy chums playing with a parent’s old cine camera, making simple animations on an old kitchen table to first early forays into television in the 1970s through to Creature Comforts, award-winning adverts that helped the young company thrive with a decent income through to BAFTA and Oscar glory and beyond to the contemporary internet era. All this from two young friends playing with an old camera and cut-out animation on a kitchen table…

The book is chronological, essentially a biography of David and Peter and Aardman itself, starting with their school friendship, a new hobby using an old camera, a home-made rostrum mount for it on a venerable kitchen table that was now surplus to requirements. What started as fun and experimentation rapidly becomes something more as the young lads find they can create their own animated shorts. In this they are hugely encouraged by their parents and others – encouragement and nurturing of talent will be a theme throughout this book, right from the start – and they are also inspired by various art books and some of those unusual children’s programmes of the early 70s, such as Vision On (a very visually-rich series aimed to cater for hearing-impaired kids). 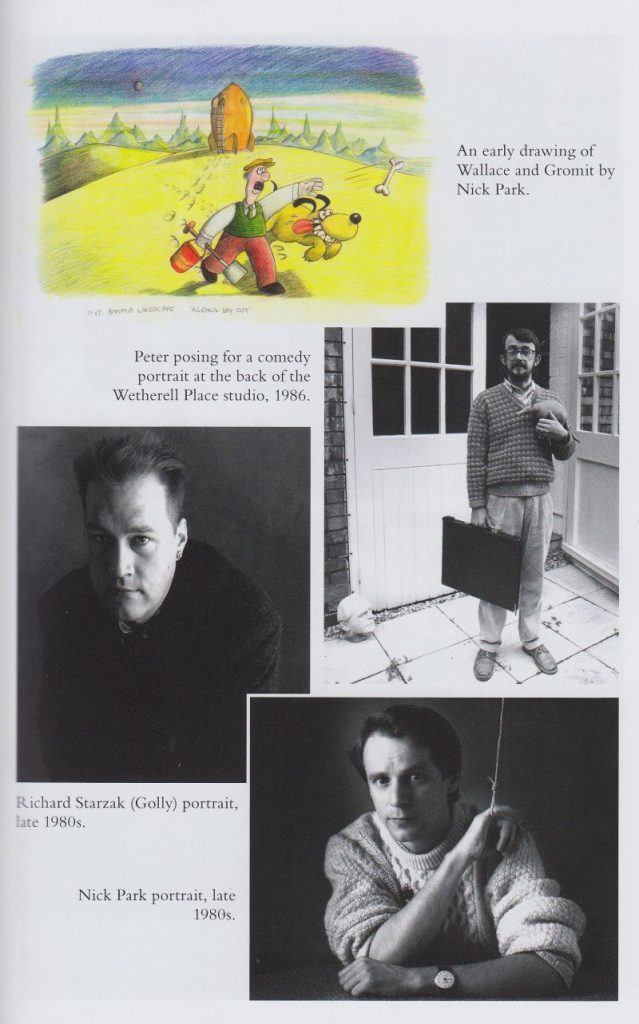 (above and below, the book also comes with several pages of photos and illustrations from throughout Aardman’s forty-plus year history) 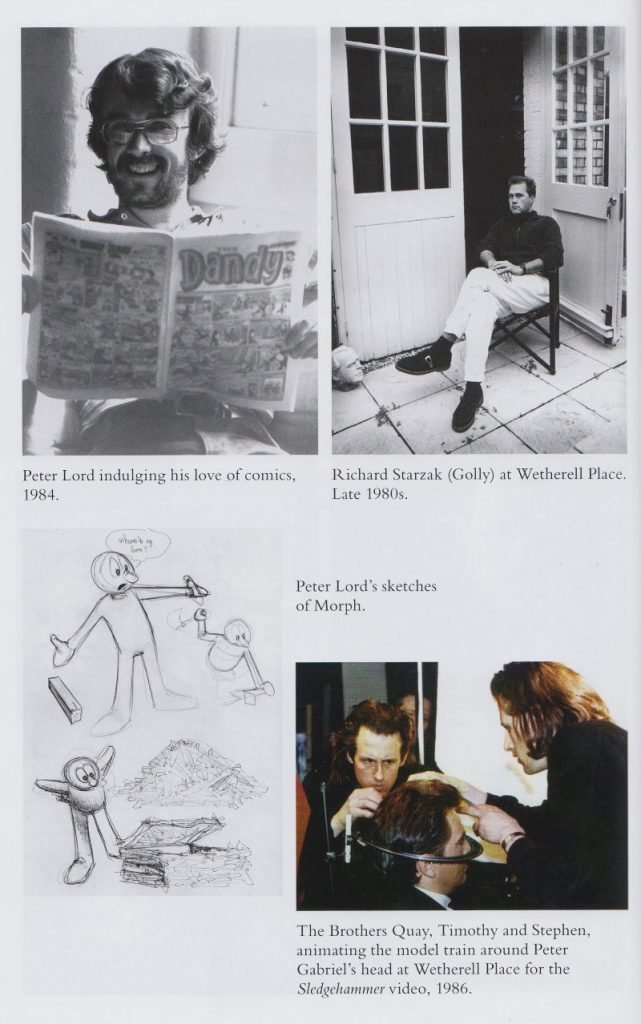 A family connection to the BBC and their home-made experiments gets them their first paying work with some brief animated snippets for Vision On, and then the follow-up, Take Hart. For the latter they would move away from their 2-D basic animations and start using a substance found in most children’s toy boxes, Plasticine. This time the idea wasn’t just for animated interludes but to have a character who could riff off the iconic Tony Hart, a foil to the much beloved art presenter. That wee Plasticine creation was, of course, Morph, and it would change not only the direction of their animation style but their entire career, the first of a number of Aardman characters who would become embedded in and beloved by popular culture.

The 1980s sees growth and the arrival of a young Nick Park, the arrival of Channel 4 (with a budget and remit to include more unusual works, including animation aimed at older viewers and not just for kids) and the huge expansion of well-funded advertising. Aardman had already crafted some interesting animation based around some free-range dialogue recorded by simply leaving a microphone at a homeless shelter, then working around the real-life dialogue, and this approach of using real-world, everyday people’s dialogue then building the animation around it found expression in Creature Comforts, the humans’ words now put into the mouths of animated zoo animals, to huge effect. Not only did this go down well and remain warmly regarded by many animation fans and inspire more advertisers to use Aardman (the ads being a great bread and butter income source for animators and artists between their film projects), it lead to an Academy Award nomination – and a win (amazingly A Grand Day Out was also in contention, so Nick both won and lost the same Oscar!). Aardman’s first Oscar and not their last…

As the 80s and 90s roll on Wallace and Gromit make their bow and soon become one of the studio’s most recognised and most adored set of characters (come one, who among us doesn’t love the humour, the craft that goes into those W&G films, the beautiful attention to detail, the multiple references to classic Brit films? How many of you are hearing the W&G theme music in your head just thinking about them?), feature films and co-operation with major US Hollywood studios like Dreamworks. This doesn’t always go smoothly – the smalller-scale, eccentric, people-driven Aardman style is very different from the big Hollywood system, and the book explores the ups and downs, although refreshingly there is no back-biting or snarky gossip here, just acknowledgement that the Hollywood studios and their approach didn’t really mesh with Aardman’s way of doing things, but also that those joint adventures taught them a lot about the business and helped Aardman.

Given the huge range of famous thesps who have lined up to voice an Aardman character it will not surprise you to learn the book also contains quotes from a number of famous actors about their time working with Aardman. Most, as Peter and David acknowledge freely (and almost gleefully) say their painstaking attention to details can drive actors up the wall and across the ceiling, requiring endless re-takes and re-recordings of slightly different voice techniques as the animators have a particular idea in mind to fit their characters, and they have to work the actors until they strike that note (also, as the duo admit, at first they simply were not used to directing actors). However this is all tongue in cheek – while I’m sure the endless re-takes for the voice talent does drive the actors mad, they all seem to understand that it is because of the perfectionism of the animators, and that the actual animation itself requires even more time and more excruciatingly painstaking work. And clearly they still all want to be a part of it.

There are lots of fascinating little sidebars to enjoy here too – those of you of a certain age will recognise some of the adverts Aardman made in the 80s and 90s and perhaps never knew it was their work (remember the animated skeleton advertising Scotch Video Tapes, “re-record, not fade away” or Douglas the wee man who came to life from a packet of Lurpak butter? All Aardman works). Or the fact that the Hawes Dairy in Yorkshire was struggling, until in Wallace and Gromit: a A Close Shave Wallace mentions Wensleydale, and the dairy finds demand soaring. Cheese-makers accidentally given a huge boost in sales by animated characters, there is something wonderfully Aardman about that, isn’t there? And I am sure Wallace and Gromit would approve.

(Above, the Aardman-created animated skeleton for Scotch Video Tape’s advert, below, another 80s boom for animators with the arrival of MTV demanding more visually interesting music videos, including the now iconic Peter Gabriel Sledgehammer video, shot in a remarkably short period of intense work and featuring among the crew very young Brothers Quay, now revered as giants of Brit animation)

I mentioned the encouragement very young Peter and David received right at the start of their animation experiments, even before they had made anything actually for sale. That becomes a theme running throughout this book, starting with the nurturing of teenage Peter and David’s interests and talents, then they in turn paying that forward, encouraging new animators like Nick Park and Golly, trying their best to make sure all their staff feel valued, encouraged, running mentoring schemes, becoming heavily involved in charity works, especially in their much-loved home-town of Bristol (even those Bristolians who aren’t animation fans love Aardman because they put back into their city and community).

This continues right up to the design of their latest HQ building and – as many of you may have read in the news just before the book came out – Peter and David, with one eye to how Aardman will run when they choose to retire, have put the shares for the company into a trust, effectively making all the Aardman staff shareholders of their own company, empowering the staff and rewarding them while also heading off any larger media company simply gobbling them up and changing them. 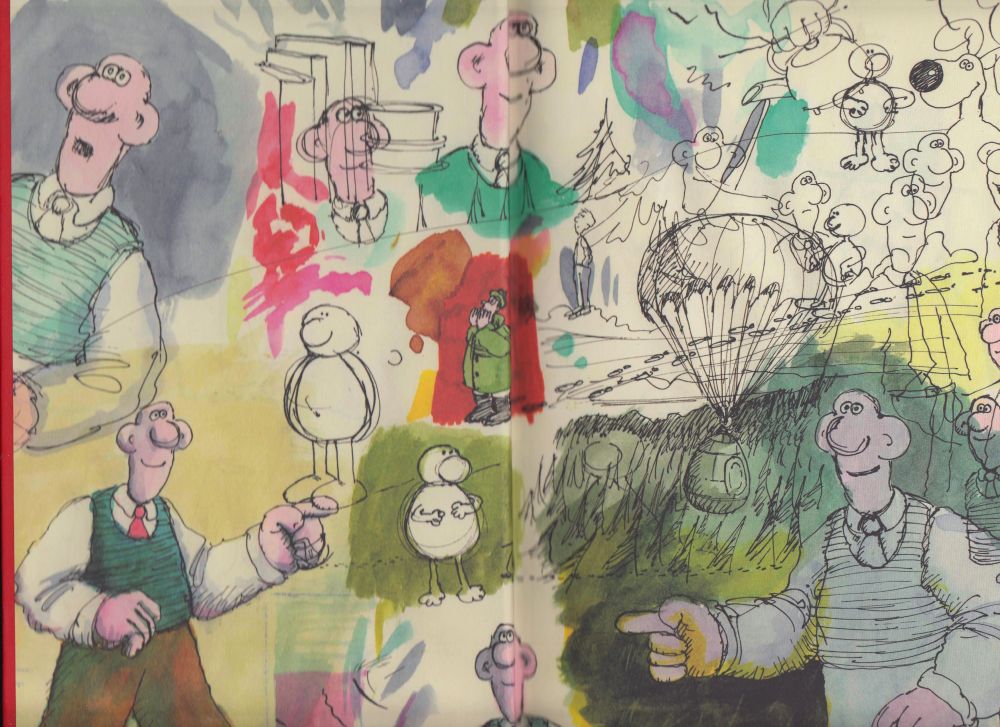 (above and below, the book has some lovely attention to detail, including these gorgeous end-papers, with original Wallace and Gromit sketches at the front and Shaun the Sheep at the back) 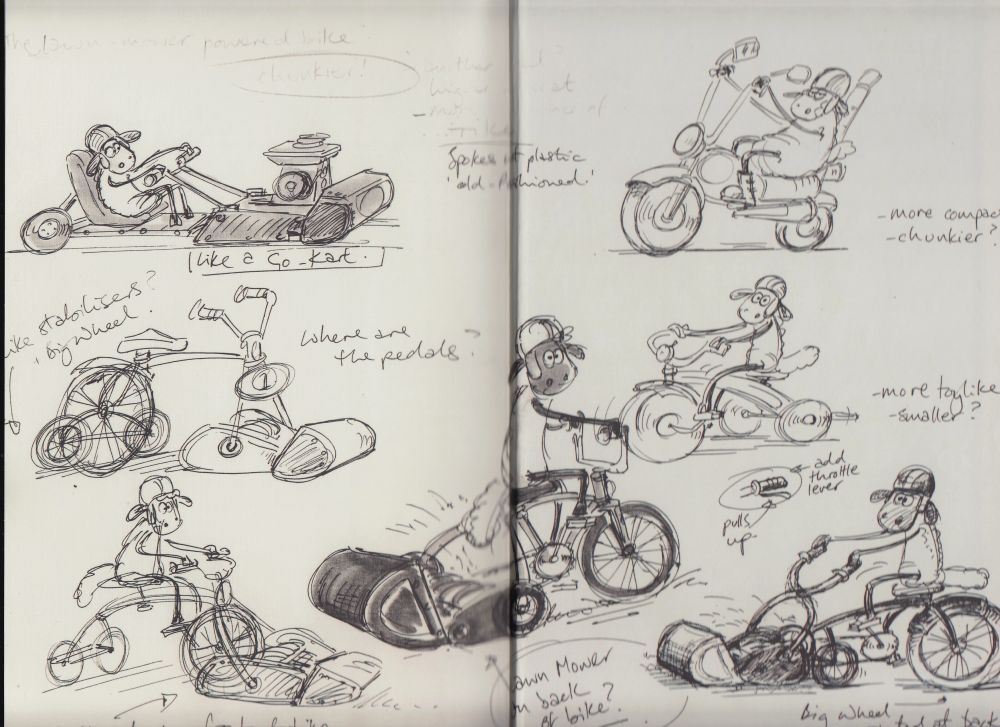 That note of encouragement and having fun is perhaps one of the nicest aspects of this book, perhaps even more so than the fascinating history of how this beloved company came into being and grew, of how its characters conquered our hearts. It gives this book a warm, smile-inducing quality, an utter delight, much like Aardman’s films themselves do. A lovely, open, friendly history of a great British film institution.