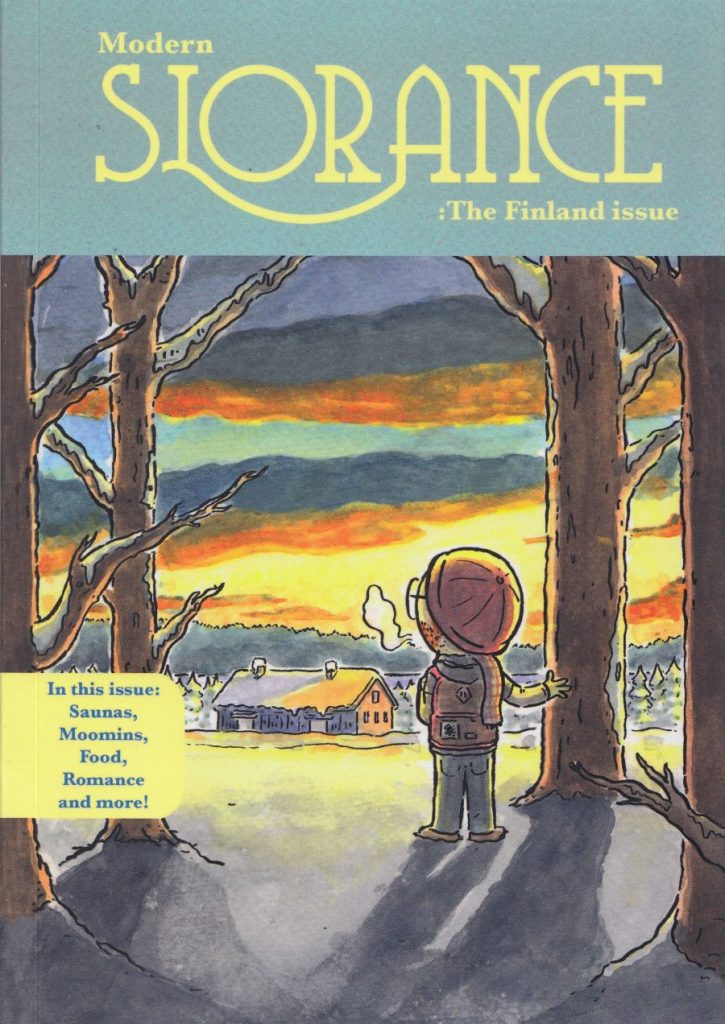 A wee disclaimer before I start: I love Neil Slorance’s comics. I first came across them in the (sadly now defunct) Plan B Books down by the Tron in Glasgow several years ago, and have been following them ever since, and then the all-conquering, award-winning Dungeon Fun with Colin Bell, and now Pirate Fun too (highly recommend those latter two for those of you with kids, they are a delight for adults and even better for young readers, some of the little girls in my own family adore them). I’ve been especially fond of Neil’s travel mini comics such as Seven Days in Berlin, or Nine Lines of Metro. I had heard from his Twitter feed that Neil had been offered a place on a comics art residency in Finland, and had been looking forward to seeing that trip filter its way into his comics, especially as Finland has been making a bit of a name for itself in the last few years with a blooming Indy comics scene (similarly it has been building a rep with the SF&F readers and writers too).

While there are may elements here you’d expect (and indeed would want to see) in one of Neil’s work – some self reflection, the influence of friends, food, exploring, romance and, naturally, the odd tortoise reference – one of the most obvious differences here is the use of full colour for the Finland Issue, a change funded through the use of Kickstarter; this comic comes with lovely, watercolour painted art, and it is a very pleasing addition to Neil’s previous travelogues – even an opening page set in a deeply snowbound forest shines with glorious colour, the greens of the trees and clear, blue skies contrasting with the bright whiteness of the snow, and the use of full colour also allows for some utterly gorgeous scenes, such as single panel depicting the colours of the sunset viewed through the wintery forest. It’s only one panel, but it is one that stops you for a moment, reminds you again that it is worth pausing now and then to raise your head, as that great philosopher Ferris Beuller once told us, to take in little moments of life like the deepening colours of the sky at sunset, the shadows stretching across the land. That is a common thing in Neil’s travel works, I’ve found, and I think it is one of the reasons why they make me smile so much… 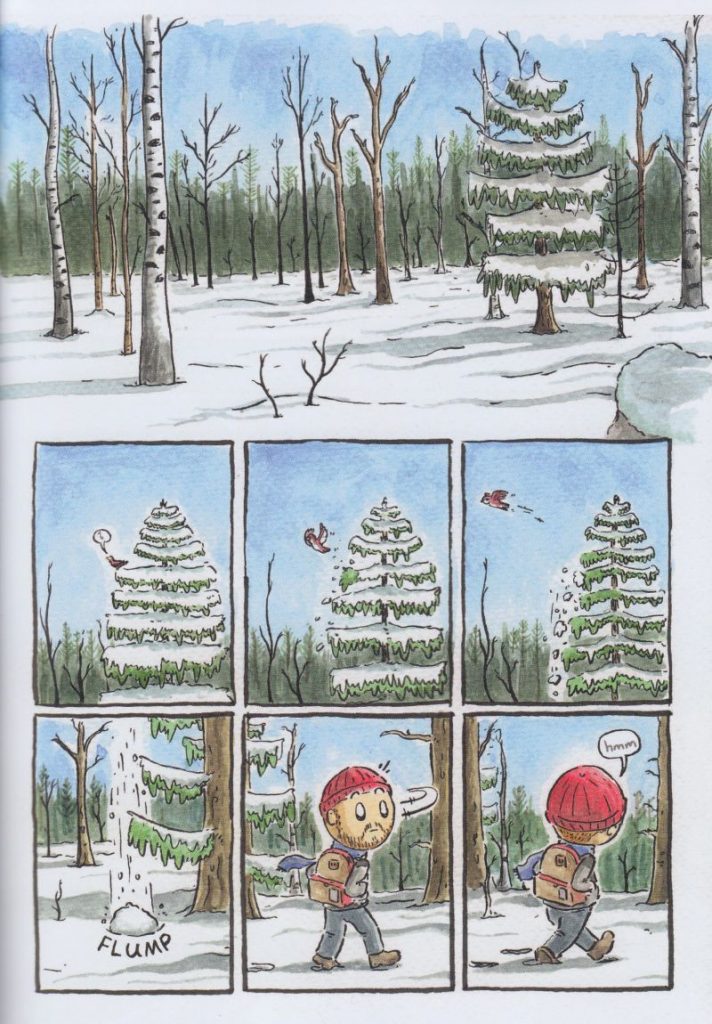 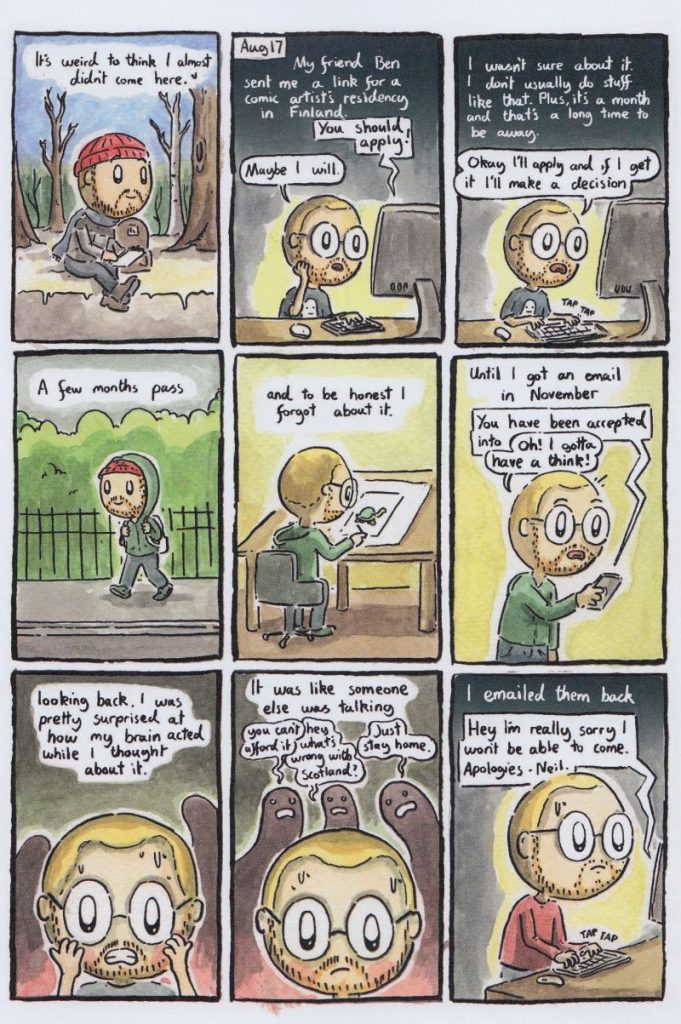 It’s a trip which nearly never happened, and in his normal honest way Neil records how he was elated at being offered a place, only to then suffer a lack of self-confidence, stacking up the problems rather than thinking of the opportunities. It’s another facet of Neil’s work that I’d admired in previous comics too, and I suspect his emotional honesty and the way he deals with such problems (often with the help of his friends) is part of why many readers enjoy his work – it’s very open, very human, very empathic. Of course he does get talked around into taking the chance offered (otherwise there would be no comic!) and sets off for the artist’s retreat in a small town outside Tampere, meeting his fellow creators on the residency who, I was pleased to see, were a diverse bunch from various countries.

We follow Neil making friends at the retreat, occasionally “flumping” into a deeper than expected snow patch during forest walks, meeting some friends who come over for a Finnish visit, exploring the local area and customs, such as the famous saunas of Finland, enjoying the dark skies and bright stars over the forest, the Moomins museum (Neil depicts Moomins-esque tortoises, he says to avoid copyright violations, but I suspect also because he just wanted some tortoises in there), and as always, the local food. I recall one of his previous works, I think it was the Berlin Issue, where Neil noted that he had lost weight and I was left wondering how he managed this as each of his travelogues are full of the joys of local food! 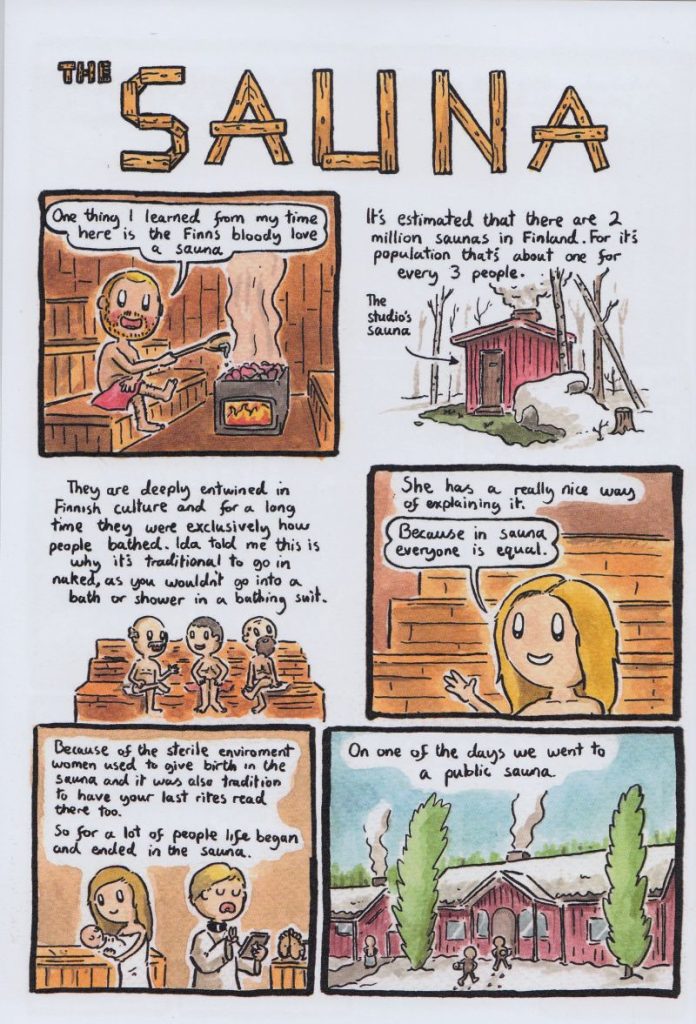 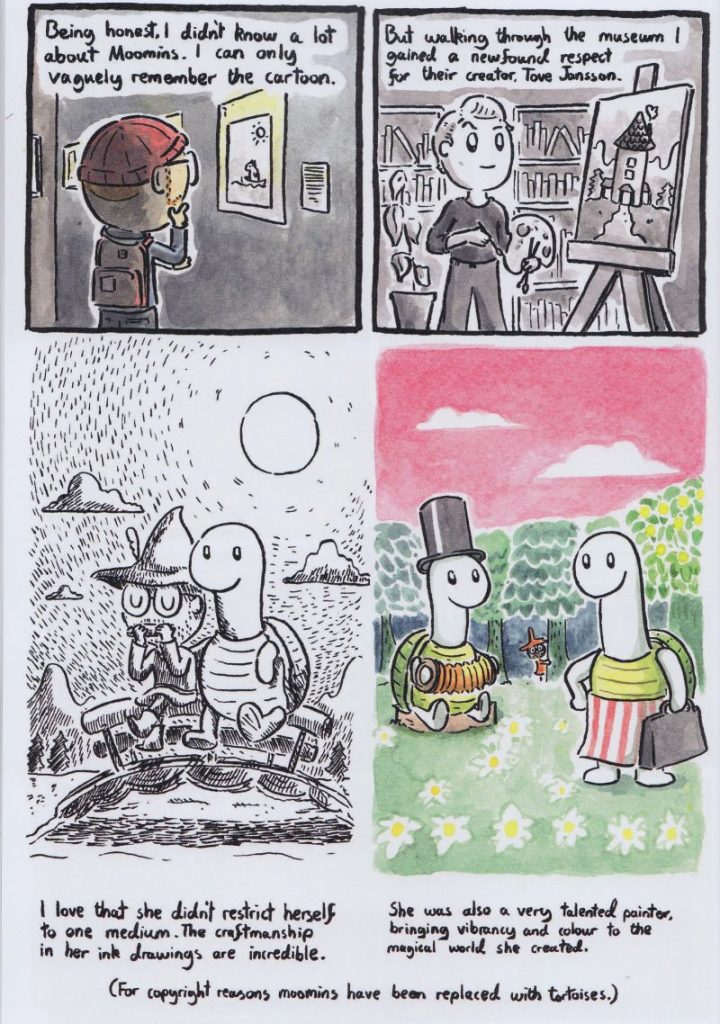 And, as advertised, there is romance – after the end of one relationship time had passed and Neil had met someone new, Ashley. Rather nicely he shows how they met when she came in to visit the shop below his studio and saw his comics, it’s beautifully handled, sweet but never too saccharine, just the right, warm balance. Naturally he is missing Ashley, but she’s arranged to meet him towards the end of his Finnish trip and… Well, let’s not spoil everything, other than to say that’s just a lovely sequence, and like so much of Neil’s work it left me with a lovely warm feeling and a huge smile. 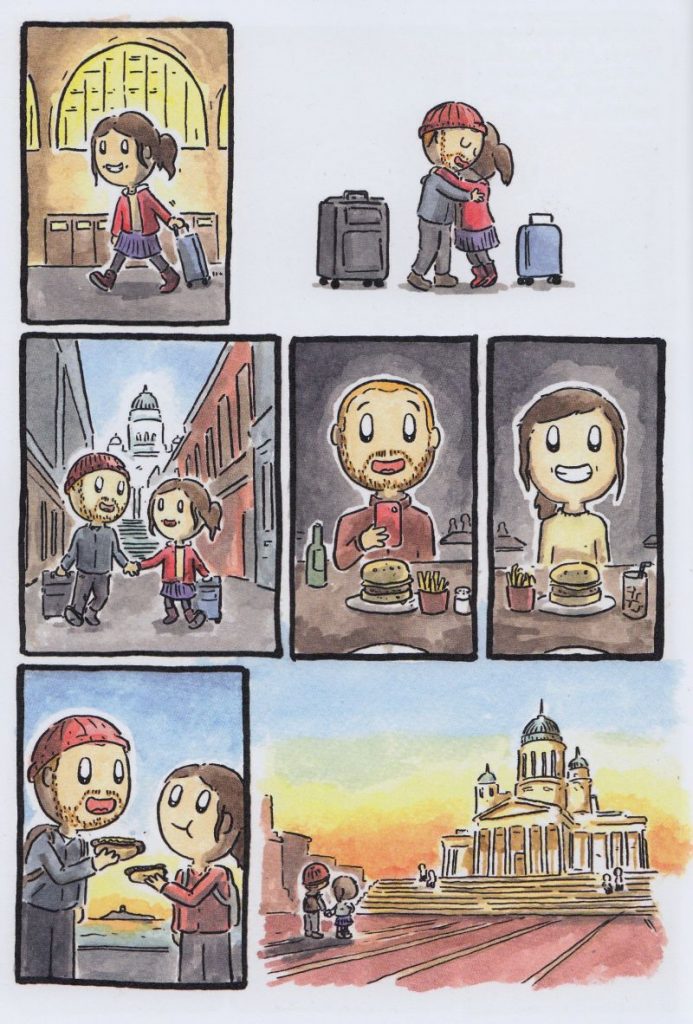