This is one of my non-fiction reviews of a pop science book from 2004 (originally published on the now sadly defunct The Alien Online), a fascinating, touching and very human study of genetic variation in the human form by Armand Marie Leroi. You may have seen the TV series which followed on Channel 4 in the UK and Discovery in the US as Human Mutants; the book was shortlisted for the Aventis Science book award and won the Guardian First Book Award: 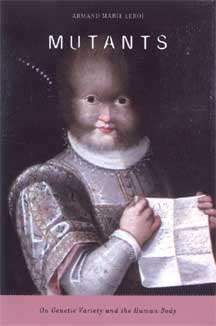 Humanity – the pinnacle of evolution. A creature which can walk upright, engage in sophisticated language, entertain abstract thought, manipulate its own environment. Humans are also the sum of the DNA. Being such a sophisticated form of life does have a drawback, however – the more sophisticated something is the more there is to possibly go wrong. The thousands of genes and electro-chemical signals which create a human child and regulate its growth can and do go wrong. Fortunately for most of us the genetic flaws which we all have (on average around 300 per individual) are normally not malignant. For some people throughout history and even today the story is quite different.

Leroi begins by explaining how it is the aberrations from the norm which can so often illuminate what the normal function of certain genes are. After his thoughtful introduction Leroi divides the book into different – although often related- areas, such as gender, skeletal structure and ageing. The first chapter begins suitably enough with embryonic development, both ‘normal’ and abnormal. Here we come face to face – or rather face to faces – with what is probably the best-known form of embryonic abnormality, the conjoined twin. As with the accompanying TV series Human Mutants we are introduced to the wood engravings of Ritta and Christina Parodi and also to the sad spectacle of their little skeleton; conjoined and on display in death as they were in their short life in 1829.

This is a common device in this book – Leroi frequently refers to historical cases of human mutation, from conjoined twins and court dwarves to African pygmies and hairy ‘wild-men’. This serves to purposes – it, of course, gives some historical range and depth to the cases being studied. Leroi examines not only the mutation but also the life of the afflicted person and the studies and theories made of them by academics of the time, contrasting it with modern science and theories of genetics, taking us from Classical theories through the Enlightenment, Nazi eugenics up to the Human Genome project. This offers not an overview of scientific evolution but also offers a view of the way in which those who are different have been seen by society over the centuries.

The second function this method of discourse provides is to humanise the cases being discussed. It would be too easy to view these mutations as merely interesting cases of study and curiosity, especially when Leroi is discussing modern scientific methodology. It is to his credit that these interesting cases remain interesting but also remain human. In a way this is a major part of Leroi’s argument – that no matter how unusual or distorted the body is, each of these people he discusses are individuals; they are human beings.

Naturally there is a form of voyeuristic pleasure to be had from this book; the author admits as much himself. It is hard for us not to look, or even gape sometimes, at some of the Cycloptic babies in jars in Dutch medical museums or 8-foot tall giants. Even when regarding an ‘Elephant Man’ with a scientific viewpoint there is arguably still a voyeuristic element present. Again it is to Leroi’s credit that he is able to admit to this without giving in to it totally – this is not a simple freak show like some old carnival. It’s a sensitive subject area to deal with, especially when discussing contemporary mutations such as Fibropdysplasia Ossificans Progressiva, a (thankfully) rare skeletal disorder where bones simply do not get the signal to stop growing. The skeleton continues new growth until the person’s body literally seizes up, leading to a premature death after much pain and increasing suffering.

Not all of the mutations here are of the spectacular variety however. There is also discussion of the common mutations that we see every day. The mutations which give some of us blue eyes and red hair and others brown eyes; make some people tall, some shorter; some with dark skin, some with pale skin, makes some average and others beautiful. Leroi ventures a little into controversial territory by discussing theories of race – an area of science which has all-too often been abused to justify political motivations (Nazi eugenics, US government enforced sterilisation of black men in the 30s).

Leroi explains that modern genetic research has shown some 80% of all genetic diversity is present in just about every corner of the globe. To be sure there are regional variations with some genetic traits obviously (sometimes visually) stronger in some places than others (such as red hair in Scotland or Ireland), but 4/5 of our genes are common in every land and amongst every people. In a way he is saying that there really is no such thing as ‘race’ in science; it only exists in political viewpoints. Again this is consistent with his message that despite every mutation every person here is a human being of equal worth to every other person. A white person, who became black, conjoined twins, dwarves, hermaphrodites, Europeans, Aborigines – all of them human. The human body can take many unusual twists and turns in its formation, yet it still remains the body of a human being. And, Leroi points out, we are all of us mutants. A successful species flourishes through biological diversity and that means mutations (something for you to think about next time you read an X-Men book).

This is a fascinating science book which treats a potentially controversial or even macabre or ghoulish subject with great sensitivity and respect. It’s a treatise on human development and on scientific progress and understanding. It’s about being human.

Not the yellow cartoon variety this time, but Doctor James Young Simpson, one of Edinburgh’s many noted contributor’s to medical science and also the first man to be knighted for services to medicine. On the way home tonight the bus was stopped further back from a junction than usual because of the sheer business of the city during Festival time. I looked up from my book and noticed that ten feet up on the western wall of the ultra-posh Balmoral Hotel is a plaque I’ve never noticed before, despite passing it a thousand times (just the wrong spot to be noticed as you are walking past). And the plaque commemorates the spot where a pharmacy used to stand before the hotel; it was here that the chemist prepared the chloroform that James Young Simpson would use in 1847 as he experimented with anesthesia and pain relief for medical procedures. Many resisted his work at first (which sounds crazy to us – imagine many medical procedures without anesthesia?!?!) as ‘un-natural’ but its use took off when Queen Victoria gave in an used it to ease childbirth. I’m sure more than a few mothers will silently thank that chemist and Simpson for starting a line of modern medicine that eases the miracle of birth :-). Simpson I knew about, but I had no idea that plaque was there or the chemist’s business either.