Step Aside, Pops! A Hark! A Vagrant Collection, 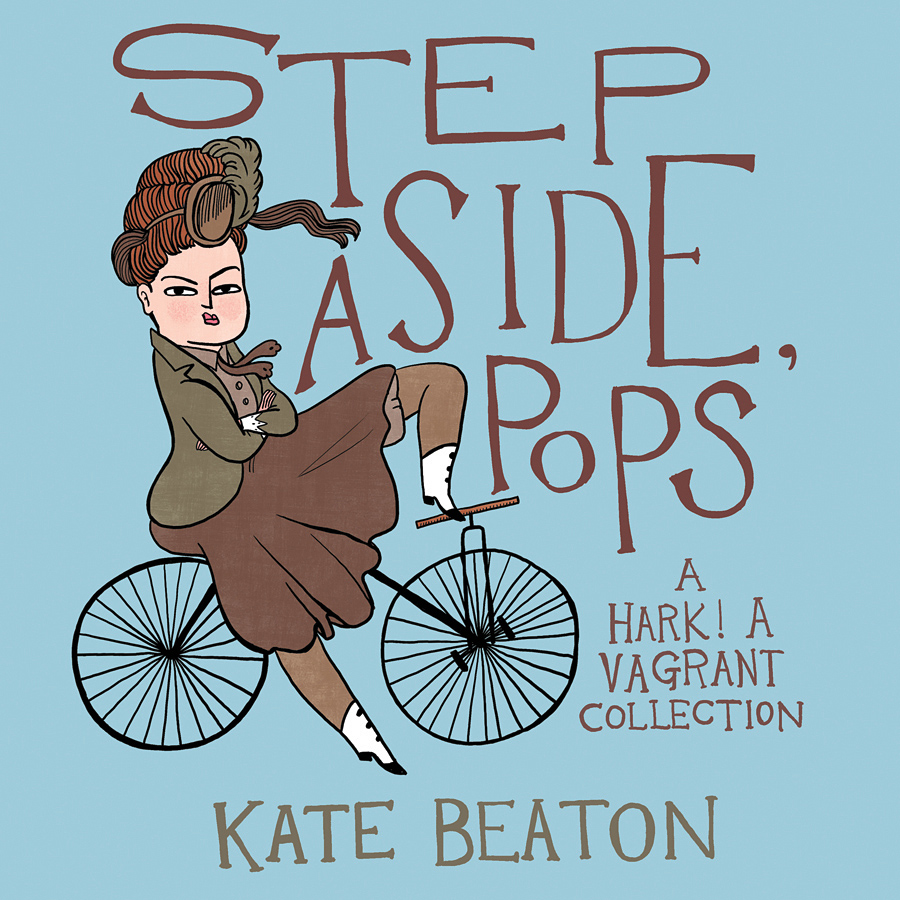 Oh, where to start with this wonderful collection… Those of you who read our blog will have already seen us praise Canadian creator Kate Beaton’s Hark! A Vagrant work over the years – as well as a previous collection, Kate generously posts a huge amount of her work online for all to read, and we’ve absolutely loved it. It’s mostly short-form cartoon strips, just a few panels (although she also does quite a few linked together in a series), but Kate packs an enormous amount into her short strips, she’s a tremendously skilled comicker. I don’t just mean in the technical sense of her ability to draw (although her artwork alone frequently cracks me up – just the cover alone for this book had me smiling hugely, I so want that on a T-shirt), but in the way she can use just a few, short panels so damned cleverly. It’s far too easy to have a good giggle and them move on without thinking too much about the effort that went into those four panels, but with a lot of Kate’s work they lodge in your brain and leave you thinking about them long afterwards, they’re not just funny, they’re funny-clever, and that tickles me just right.

Kate’s subjects range all over the place on her site and here in this collection too. There are strips drawn from worries and incidents in real life, or modern concerns (several linked strips see parents having to chase bizarre militant scary feminists from their children’s bedroom like some strange modern fairy tale creatures), others draw on popular culture, like her take on famous comics characters – in a series on Lois Lane she pokes fun at the way the whole Lois-Clark Kent-Superman relationship has been depicted over the years. As Kate adds in her footnote “don’t give me those comics where Lois is a wet blanket who can’t figure out the man beside her is Superman. If Lois isn’t kicking ass, taking names and winning ten Pulitzer Prizes an issues, I don’t even want to know.” Following this comment with a strip which shows Clark Kent in full nudge-nudge, wink-wink mode: 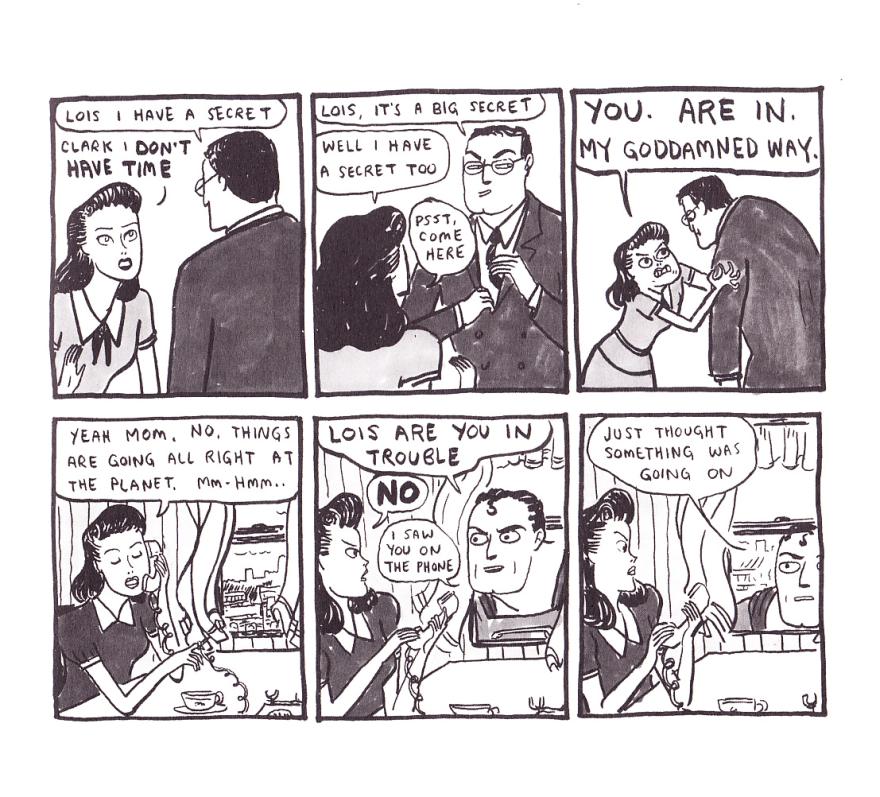 It’s not just the final gag, it’s the whole short build-up, her art showing Clark so pumped up with a sense of himself he’s radiating smugness and is too clueless to pick up on Lois’ body language which is clearly saying if he doesn’t stop hassling her, she’ll stick a lump of Kryptonite where the sun doesn’t shine… Or a bystander asks Wonder Woman why she isn’t chasing a bad guy who is running away, “Girl, I’m wearing a strapless bathing suit and high heel boots, what would you do?” And then there’s her pretty prickly persona for Wonder Woman… 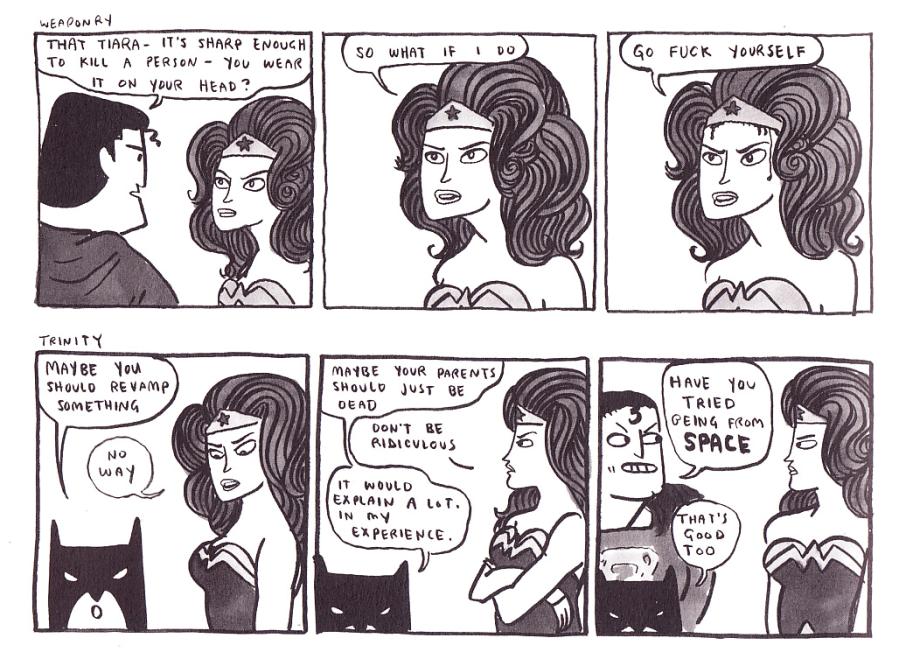 A running theme with Kate’s work, for which she’s rightly become both loved and respected, are her delightful – not to mention frequently damned clever – strips which riff on classic literature or on historical figures. Sometimes it can be a very well-known historical figure, such as her series of “Founding Fathers in a Mall”, some loving this modern shopping experience while others like George Washington go and sit on a bench, despondent and complaining this is worse than Valley Forge… Sometimes it can be a historical figure new to you – one I hadn’t heard of before was Doctor Sara Josephine Baker (known to her friends and patients as “Doctor Jo”), a pioneer and campaigner in hygiene and in children’s health, Kate poking fun at the way some things we take for granted today weren’t known back in the day, so we get the lady telling her that her baby is sick. Doctor Jo looks, takes the child and rights him, commenting “you baby is upside down” in a perfectly timed piece. I’m impressed that Kate also got a couple of strips in on Catalonian inventor Monturiol and his remarkable early submarine, a historical curiosity I’ve always found fascinating but few folk seem to have heard of, so I was cheered to see her covering him and his amazing machine in this collection.

Classic literature proves a rich and fertile seam for Kate’s pen and wicked sense of humour – the Brontes being a particularly happy hunting ground (“Next time on Wuthering Heights – no-one is lonely in a graveyard” complete with raving mad Heathcliff clutching Cathy’s bones). Or in another Byron and Shelley discuss their dreams, Shelley being sure a dream of a naked child rising from the seas was a portent of his death by drowning, Byron more interested in hey, when you say kid, you mean like who cares or more like eighteen and naked, as he pervs away oblivious to Shelley’s worries. “You know, I don’t like it when they call us pariahs,” adds Shelley. “Yes you do,” replies Byron… Or Pride and Prejudice gets reworked but this time with a whole “house full of Mulders”. Yes, our favourite “I want to believe” FBI man, but lots of him, all catching the eyes of the ladies at the local ball (except for “Miss Scully” who is less than impressed). Some old Broadsides woodcut images from the Bodleian Library’s online collection also prove great starting points for Kate to go off on her own tangent (one classic one ruminating on mortality shows a woodcut of three skeletons, leading into Kate’s strip where one complains about their expressions: “ok, so we’re skeletons, but do we have to be sad skeletons?”). 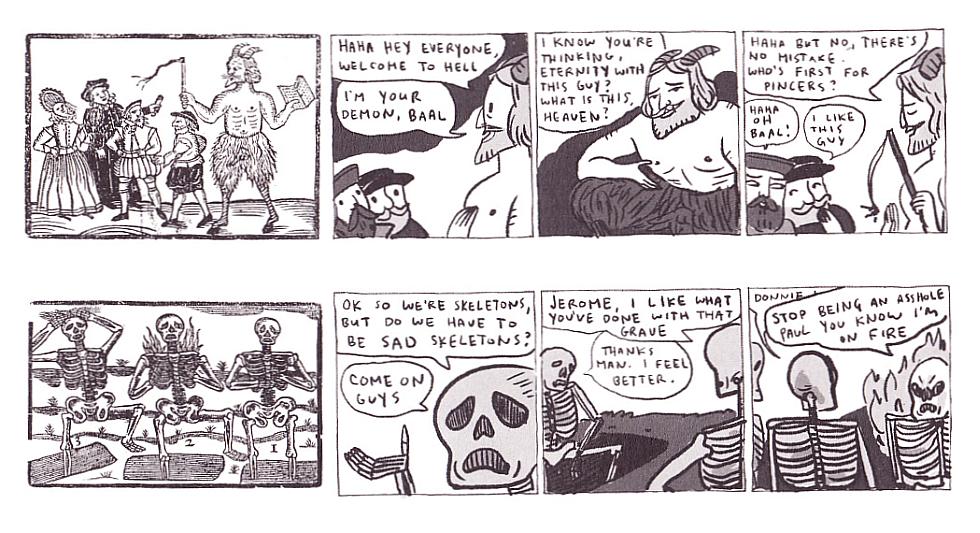 Ultimately it’s hard to really get over in words just how effectively these strips work, you really have to read them for yourselves to get the full effect, from the artwork and the brilliant expressions Kate gives so many of her characters (I was frequently in kinks of laughter just from the art and expressions alone) and the beautifully observed timing of the frames of each strip (and so much of comedy relies on that innate good timing). And while we all enjoy a good laugh at a decent “gag strip”, there is so much more going on in the world of Hark! A Vagrant – the literary references for some strips are knowing but not elitist, anyone can get them (and they show a love for the original books while still poking fun), the historical strips are funny but also rely on actual knowledge, which just makes them both funny and also clever, the asides on everyday life and pop culture are well-observed (and frequently make a quiet point that will linger in the mind afterwards, more effectively than any amount of soap-boxing might have done). 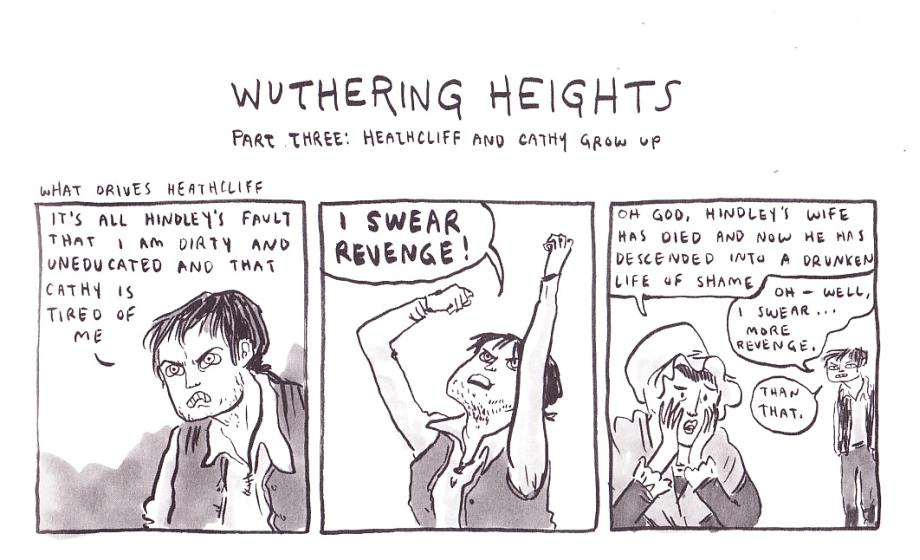 The amount of laughter this generated between me and colleagues all demanding to know what I was laughing at, only to be reduced to guffaws themselves when they looked… It’s a real pleasure to read so much of Kate’s work in one big hit like this, it’s truly smile-inducing work. If you’ve already encountered Kate Beaton’s work then you’re probably already ordering this; if you haven’t then go check her Hark! A Vagrant online and I’m sure you’ll soon be wanting to give her money by purchasing her books too.