A Castle in England, 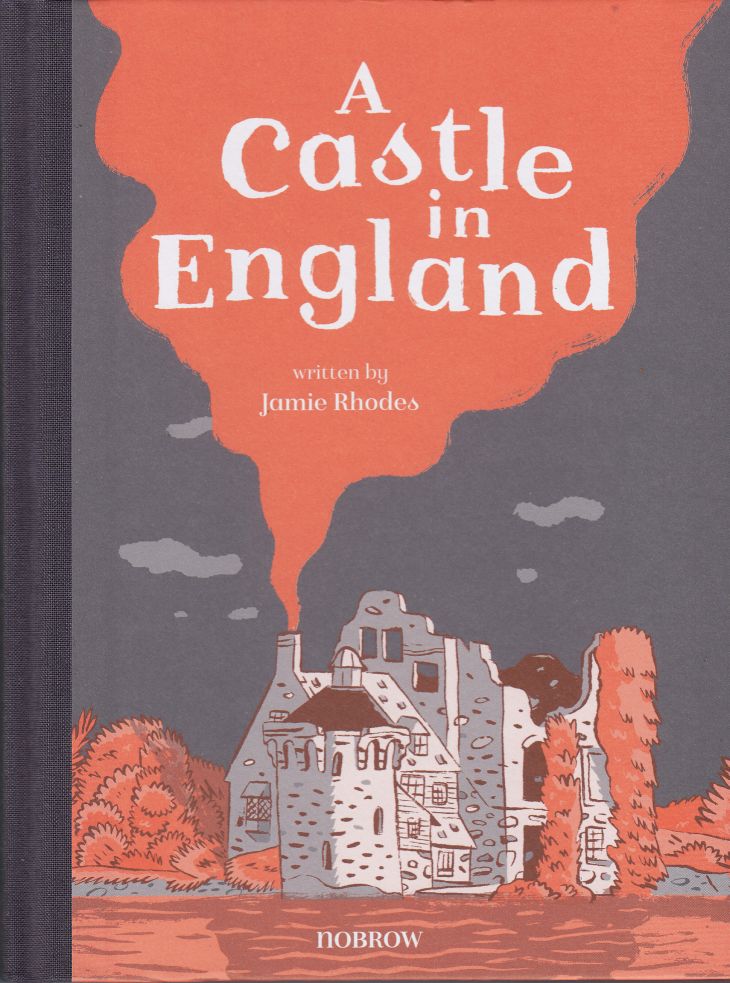 Castles. There’s something wonderfully evocative about castles, our shared history in stone, some ruined, some, beautifully maintained, all evoke a sense of visual delight and a sense of wonder as we ponder what those walls have seen, great sentinels to centuries of history. They are visible history, history we can touch, walk around, take in, and in our small islands we are blessed with more than our share, from Highland tower houses to vast medieval castles. Every day on my way to work I pass a huge one, Edinburgh Castle, and every time I see it I consider how lucky I am that my commute to work – normally a mundane event for most of us – takes in this impressive piece of solid history standing above my city, still commanding after all these centuries.

Jamie Rhodes clearly understands this, and a spell in residence at Scotney Castle in Kent has doubtless impressed even further on him the fact that our castles are full of stories from across the centuries, from the everyday lives of those who lived or worked in them or around them to the Big History events of dramatic battles, they’ve marked their time through all the changes in our society across those years. In A Castle in England Jamie has written five stories, each drawn by a different artist – Isaac Lenkiewicz, Briony May Smith, William Exley, Becky Palmer, Isabel Greenberg – and taking in a different event in a different period in this Kentish castle’s life, from the medieval peasants of the castle’s earliest days through the religious strife of the reformation, the family drama of dynastic succession, smugglers and women emancipating themselves. It proves to be a lovely series of snapshots out of our shared history, and the use of different artists on each story works well here, giving each historical setting its own look and style. 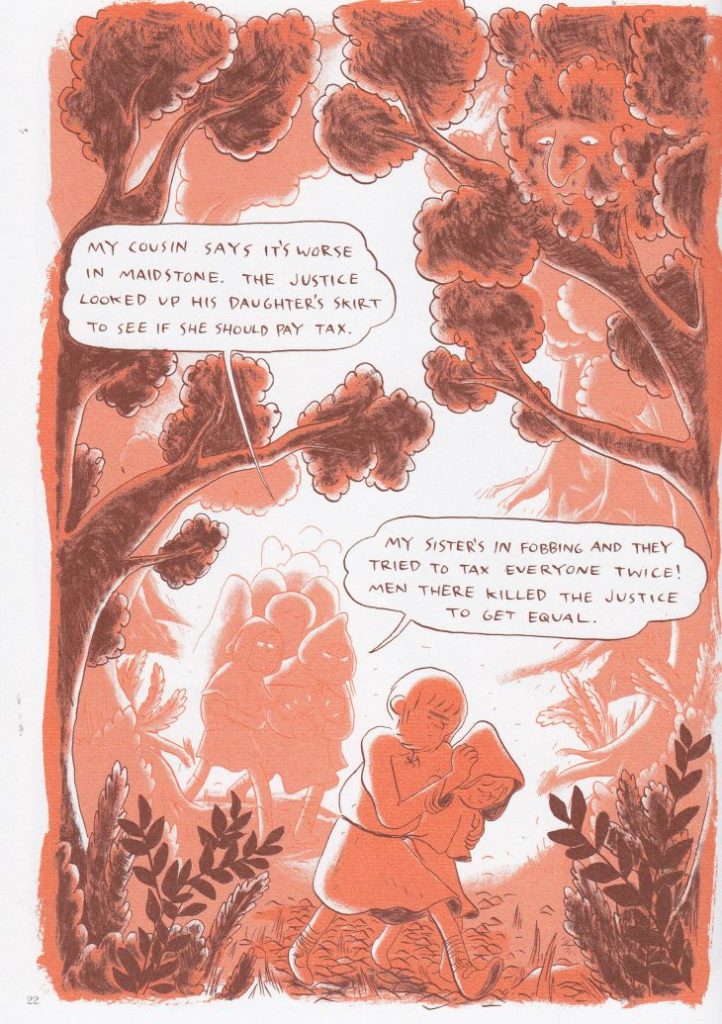 One of the things Jamie and his collaborators do throughout is to give us stories which give us a sense of a distinct period in history while also showing how often events then are relevant to the here and now (which as a history buff I heartily approve of; history is never just past, it suffuses the present and is part of the tapestry of tomorrow).  The very first tale, set in 1381, as the castle is being completed, and the growing discontent of the mass of the population, the serfs, is about to explode into open rebellion (lead by the famous Wat Tyler, one of the original folk heroes). It’s a glimpse into a very hard life – today we are (justly) outraged at the inequalities in our society, the gulf between the super-rich minority and the rest of us, but for the serf it was even worse. Their rebellion, while unsuccessful, shook the small, ruling elite to the core and would in time lead to changes for the mass of ordinary folks that we benefit from today (and concerns from the powerful over what an angry mass, pushed too far, can do – still something rules and elites try to control today in their fear). 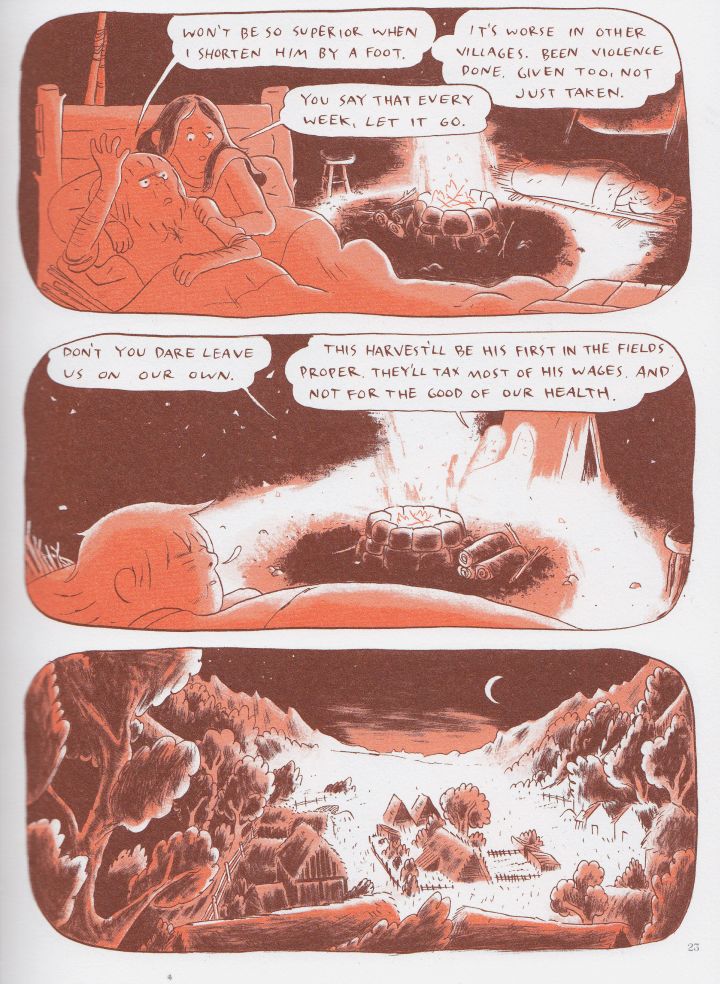 (the Medieval period with The Labourer,  art by Isaac Lenkiewicz)

The Priest, with art by Briony May Smith, takes us into Tudor period and the religious turmoil caused by Heny VIII’s break with Rome. Scotney is now home to the Darrell family; Catholics in a country where that is not just (very suddenly) a minority religion, but one suspected – to be a devout Catholic is to be suspected of being a possible deviant, a traitor, more loyal to a religious leader abroad than to your nation and monarch, dangerous, subversive. It leads to suspicion, persecution, division. It sounds, sadly, not too dissimilar to some of the troubles stalking modern Britain… William Etsey gives us a rollicking tale of smugglers – far from some cut-throat bunch though, most of these are locals, struggling in a depressed economy after losing one of their main industries, doing a bit on the side (and also subverting unfair taxes), against a background of unrest with the status quo of Britain coming from Jacobites in Scotland. Again there are echoes to some of today’s tensions, while the characters are well handled, they feel like real people, people we could know, neighbours, friends, not distant historical characters. 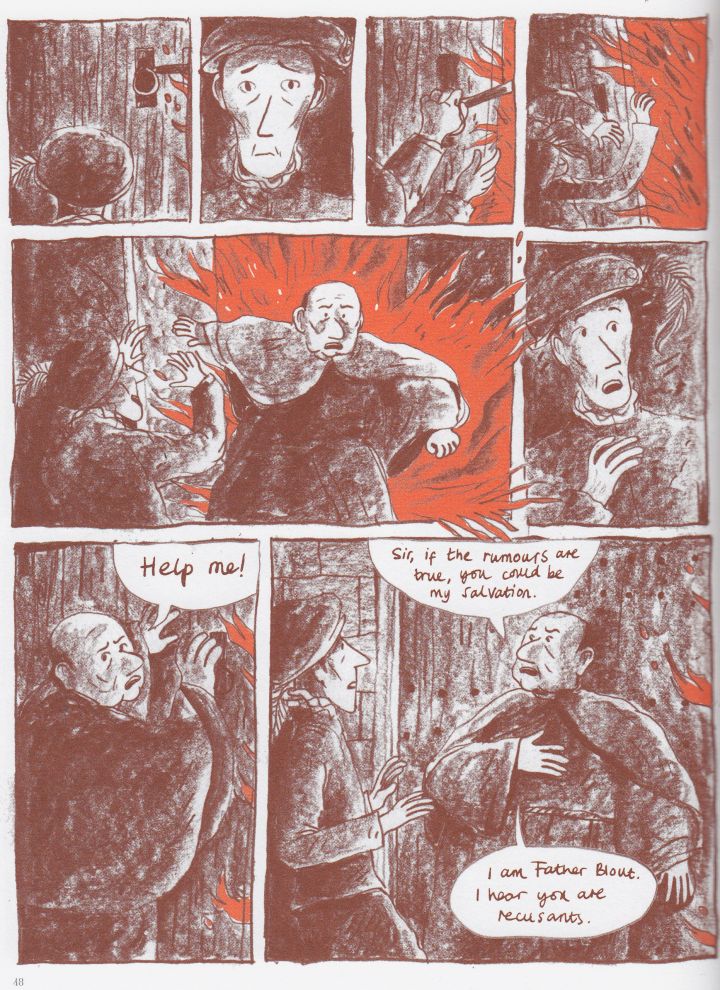 (above The Priest, art by Briony May Smith; below – The Smuggler, art by William Exley) 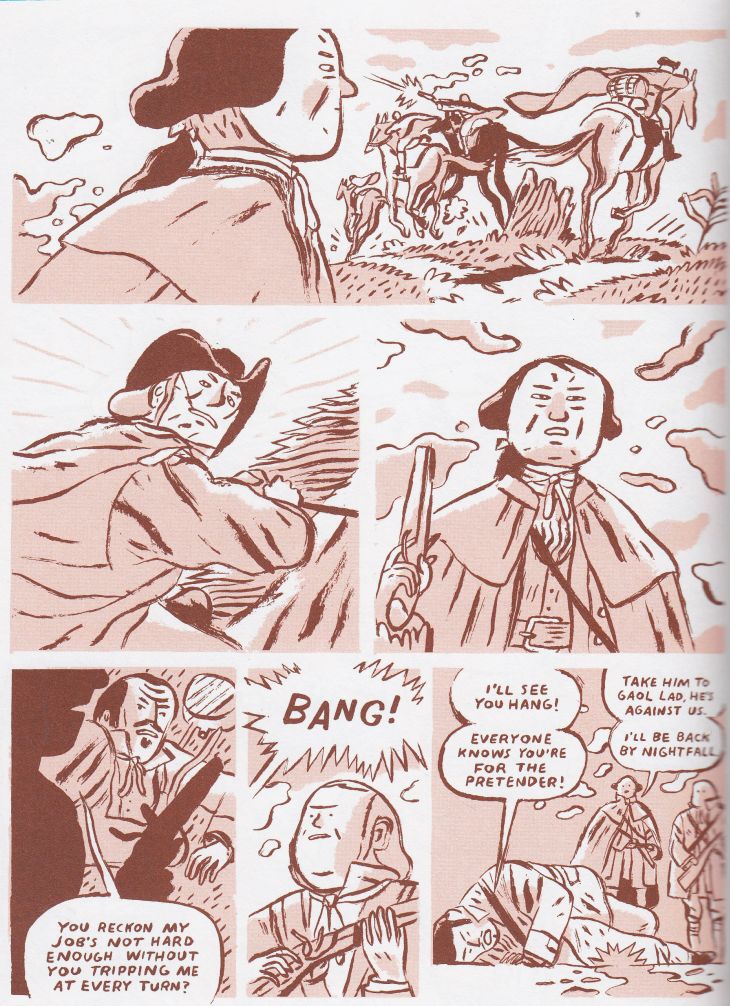 Becky Palmer’s The Widow brings us to the rational, sensible Victorians, although it opens with a rather less than rational suicide – by blunderbuss, no less… It’s an age of remodeling, the old Castle not so desirable in this modern age, the family now in a fine manor house, much more comfortable, but with that Victorian love of a romanticised past (something we’ve inherited today) the old castle is deliberately partially ruined to create a form of picturesque folly for them to enjoy on their walks round the estate, nicely depicted by Palmer with a giant figure of the lord of the manor, Edward Hussey III, pushing over blocks, blowing them down. There are some lovely scenes of Victorian domesticity too, with touches that made me smile – he showing off the fine, new manor house “this will be the billiard room” he tells his male friends, nearby his new wife chats to her girlfriends “I have plans for his billiard room”. How many couples have had that argument to this very day?! 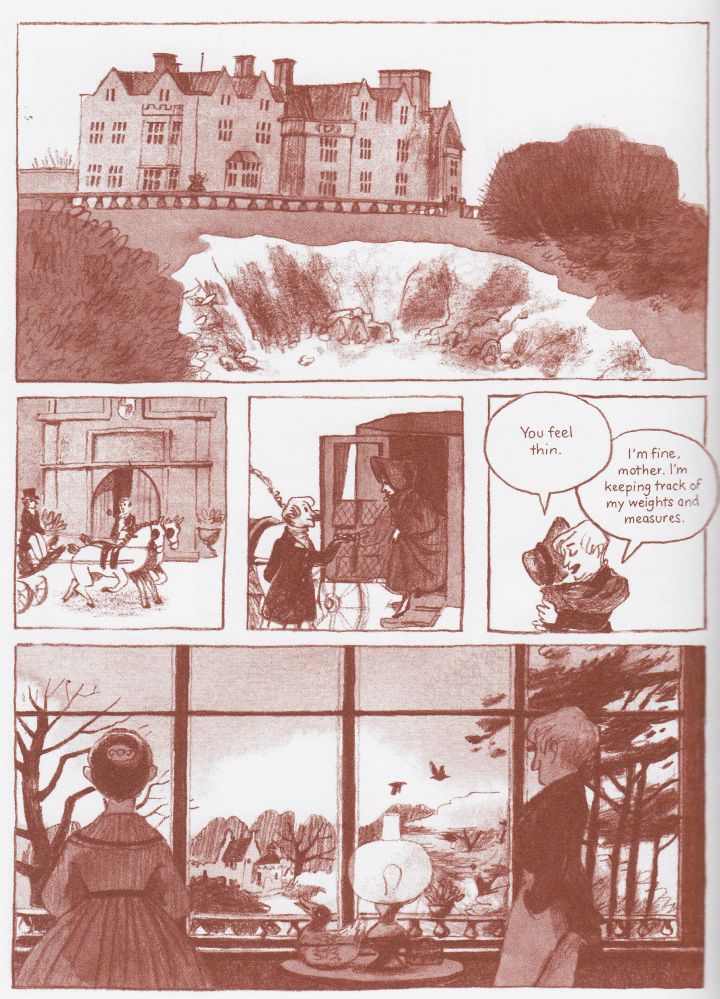 (enter the Victorian era in The Widow, art by Becky Palmer)

The final piece, The Hunter, is illustrated by one of my favourites, Isabel Greenberg in her distinctive style, and brings us into the twentieth century, the highpoint of Empire, of the last great period of the rich gentry in their great houses before the calamity of the Great War helped hasten the end of that way of life for most. Times may have changed, but some societal rules are still stiff and divisive, the brother allowed to indulge in expensive travel  (which mostly takes the form of lording it over the natives and shooting every animal he sees), the sister stuck at home, not allowed the same privilege of travel but at the same time her station won’t allow her to join in more simple pleasures (she would like to join the working class families who come for working holidays to do the hop picking, but her mother considers this far too beneath her). Here Rhodes storytelling is playing right to Greenberg’s strengths, as the women, supposedly held in their rigid place in the pecking order, use their own guile to exploit circumstances to achieve what they want (the impish smile of success Isabel gives the sister is delightful). 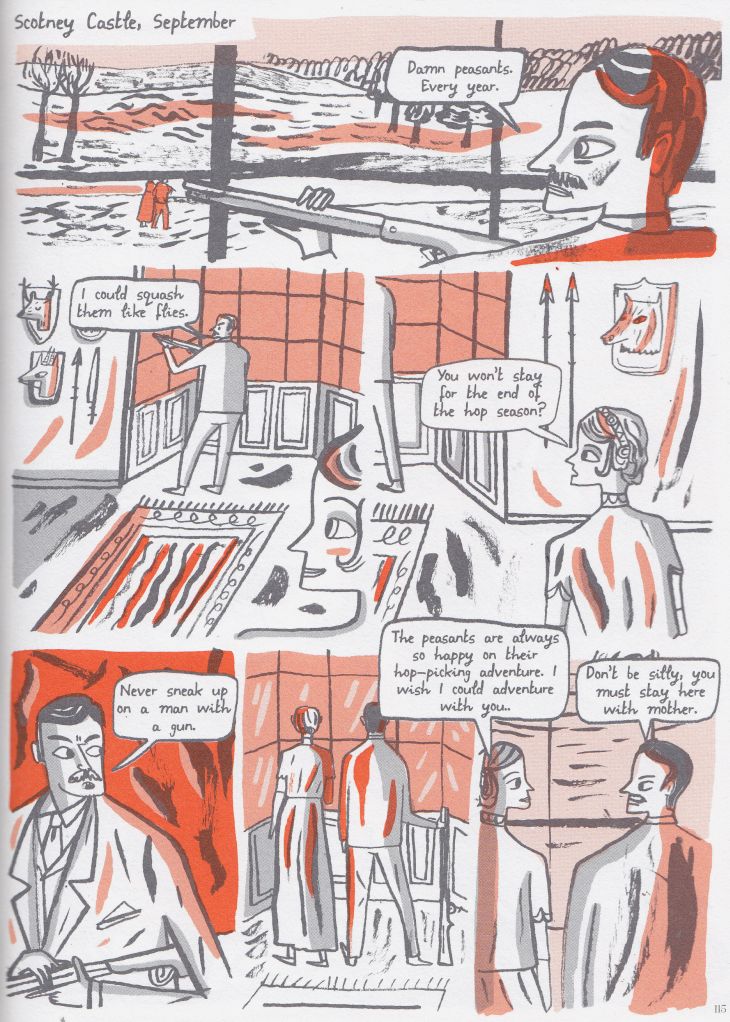 (the twentieth century arrives in The Hunter, art by Isabel Greenberg)

Each story comes with a quick introduction to give some setting to the historical period, and a longer set of notes afterwards, explaining more about both the period, to give some context, and about the family resident in the castle during that time. All in all it’s an utterly charming delight, snapshots of British history viewed through the people who have lived in and around this castle for almost seven hundred years, a reminder, if one be needed, that these magnificent structures are more than just our architectural heritage, or reminders of Big History (kings, queens, civil wars) but the same everyday life each one of us, the loves, deaths, marriages, children, the struggle to get by in difficult times. These great walls have seen all of this and more. When I pass Edinburgh Castle on the way to work it never fails to spark ideas in my head, stories, pieces of history, there is, for me, a real sense of that past right there in the present, alive, not just a monument, and that’s what Rhodes et al do so very well here, remind us that these buildings aren’t just structures, they’re part of our lives and those who came before us, our collective history, our changing society (and the elements which never change, because, well, human nature…).

All delivered with a delicious variety of art styles by Rhodes’ collaborators, and bound in a handsome small hardback (Nobrow really do pay attention to the book itself as a lovely object, not just the contents), this is a lovely and unusual addition to British comics shelves, and a charming read for both those well-versed in history and those who are only dipping their toes in, curious to know more.