Britain: one of the great intellectual powerhouses of science and engineering advances, from the days of Newcommen, Brunel, Stevenson and Newton on and yet since the end of the Second World War haven’t those glory days where we lead the world slipped away? No, says Francis Spufford, who takes several fascinating post war British inventions by the great British Boffin that have lead the world, including the brilliant triumph where, for a change, the Blighty Boffins took on the wealth of American privatised research and made vital genetic research work in a way that could then be shared with the world to further medical advances (take that, Craig Venter!). This review first appeared on The Alien Online back in January of 2004, where in addition to science fiction, fantasy, horror and graphic novel reviews I also contributed a number of popular science lit reviews:

The Backroom Boys by Francis Spufford 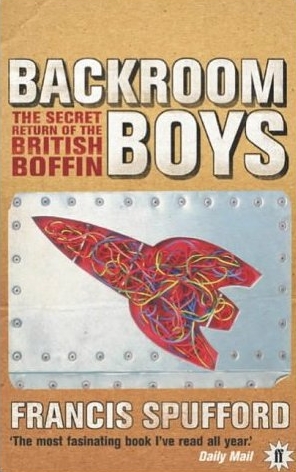 Ladies and gentlemen, let us celebrate the Great British Boffin!

Boffins. It’s a peculiarly British word for a very British kind of eccentric scientist. We’ve all got a mental image conjured by that word; cardigan-wearing, pipe-smoking types working on Heath-Robinson contraptions which look ludicrous yet become the prototype of inventions such as radar, supersonic aircraft or genetic sequencers. Spufford, author of the lovely The Child that Books Built, has taken several post-war episodes of invention to highlight the fact that the British Boffin is still around.

Backroom Boys begins with the ill-starred British space programme. Yes, we did have one once upon a time, although you can be forgiven for not knowing. In a typically British fashion it was run piecemeal on a shoestring. Not quite a garden shed moon rocket but pretty close, as a converted flying boat manufacturer designed and started to build rockets.

Where NASA had billions of dollars and tens of thousands of specialists in many fields the British had a small team doing it all – and pretty well too. The aims were limited and the technology too, constrained by the lack of investment. By the time the rocket finally took off successfully and put a tiny satellite into orbit the project had already been cancelled. Again the typical British way of doing things: spend time and on something then cancel it just as it begins to show some hint of success.

The chapter on the magnificent technological folly of Concorde is similar in tone; backbreaking research into an unexplored field of science and engineering which ultimately was thrown away. Spufford takes us through the design and the political problems which dogged the Anglo-French project right through to the world economic and fuel crisis which effectively stymied it as it began to fly and the limited legacy bequeathed to British Airways.

It’s not all doom and gloom and heroic failures though. Rarefied theorists come out of their ivory towers to map Britain in unprecedented scale in order to design transmitters for the new-fangled mobile phones, innovating in many realms: computer modelling, multiple frequency transmissions, cellular structure for broadcasts. We all use – or are annoyed by – these (now) tiny, bleeping devices of mass communication today, but most of us probably only have a vague idea of how they came into existence and just how it is that millions of them can be used each day so easily. British know-how strikes again.

The Universe in a Bottle is a chapter which I suspect will warm the heart of many a geek of a certain age. A new generation of backroom boys (don’t titter, it doesn’t mean anything dirty you naughty lot) arises, working in their bedrooms on a device which is new to the home: the personal computer. Tinkering with Acorn Atoms and ZX81s… who else recalls those early days? And then the mighty BBC model B gave a couple of boys at university the ability to design something no-one else had thought of: a truly three dimensional space on the two dimensional screen.

Those of you old enough to remember the days of keying in long programmes by hand or buying a cassette (yes, cassettes you young whippersnappers!) of a “100% pure machine code” home-made Space Invaders game from some bloke advertising in the back of Computer Shopper will guess what this revolutionary software was: Elite. One of the first enormously successful games and technologically innovative, too: the routine the boys re-wrote to make the BBC perform the graphic they wanted amazed even the people at Acorn who built it. It may look tame to day but it was the first of its type back in the dim days of the early 1980s, and it was a bloody good game too.

The book wraps up with very modern technological innovations: extra-planetary exploration and the unravelling of the human genome. The multi-national attempt to decode the human genome, to read the book of life itself is one of the biggest scientific projects in human history. It is a project which holds promises of great changes for all of humanity and is as breath-taking in its scope as the Apollo programme was in the 1960s. And it nearly foundered on the rocks of American capitalism.

Craig Venter announces that his private genetics company intends to do most of the work over the top of the public research bodies. In the US government agencies are forbidden from competing against private industry, so that appeared to be the death of the public programme. Needless to say Venter wasn’t doing this for high-minded philanthropy; he wanted to make money from the information he decoded. Step forward the British Boffins. Funded by the biggest charity in the world, the Wellcome Trust, they decide that the book of life will not be privatised on their watch. They want every scientist in the world to be able to access this information freely so that even doctors in poorer countries can use the data to help treat diseases. They announce at a conference that they will if necessary, do the entire project themselves. The dispirited US scientists go back re-invigorated to their public projects. The rest is history. This is science for the finest reasons – completed purely for the betterment of humanity.

The final chapter deals with the not so well-funded boffins who are the brains behind the Beagle II Mars explorer. Struggling with the ever-decreasing British commitment to space endemic since the project in the first chapter. Trying to pack in as much technological sophistication as possible into a tiny probe to ride a larger ESA vessel is difficult. Trying to get the funding to make even this modest device is even harder. But, as we all know by now, they succeeded against the odds (the favourite type of British success). The British boffin strikes again.

This is a book which is as unusual and quirky as the kind of people it is describing. It is part a history of science and partially a celebration of British eccentricity and genius – and we do like our geniuses to be eccentric in this country. It is an extremely affectionate look at the Great British Boffins who have quietly helped to shape the world we live in which never becomes to maudlin or overly nostalgic, despite re-creating the Dan Dare atmosphere of the ’50s rocket ships so well. It celebrates triumph and disaster equally buy still comes out with an uplifting message of optimism. This will delight and fascinate anyone interested in the history of science and, with the chapters on Concorde and Beagle II and new racketeers re-appraising the old British rocket it is as contemporary as it is historical.