After a fair old wait and lots of speculation over Daniel Craig’s suitability for the role and rumblings over the ‘rebooting’ the new James Bond has arrived, to pretty much universal acclaim from the reviewers. Was I impressed? Damned right I was. Cineaste though I am, I enjoy the Bond movies too (hey, can’t always be watching indy and foreign movies) and have been wondering what this would be like. Right from the start with the usual pre-credits sequence Casino Royale sets out its stall as a harder, grittier and more brutal version of Bond, shot in a monochrome (almost like CCTV footage) we see Bond’s first two kills, the necessary number to be considered for double-0 status, leading into a pretty cool version of the turn and fire out the screen, blood comes down scene you get at the start of Bond flicks.

The first third of the film is relentlessly action-packed and gripping – the scene in an African construction site using Parkour-style stunts is brilliant. Despite the heroics and stunts, this is a young, inexperienced Bond and he makes mistakes, misjudges things; when he gets into fights they are brutally physical and in the following scene you can see the marks it leaves on him down to bruises across his knuckles (so he’s not superhuman). The actual card game (reputedly based on a war-time experience by Ian Fleming in Portugal where he claimed to have tried to fleece some Nazi agents in a casino, although other reports say he lost and more than likely the Nazis were Portuguese businessmen) could have been a slacker third of the film after all that action, but actually it is incredibly tense, although there are nice touches to the past history (reset somewhat by this reboot) such as Bond putting on his first properly tailored dinner jacket somewhat reluctantly until he looks in the mirror and you can see him thinking, hey, I look good in this… 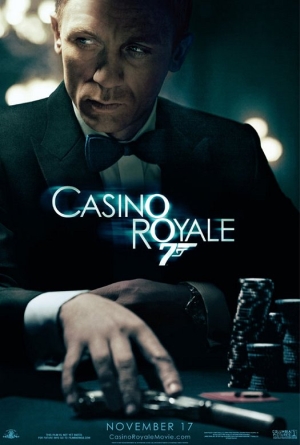 Which left me wondering what they would do for the final third of the movie. I won’t blow it for those who haven’t been yet, but suffice to say they pulled it off. Not quite as well paced as the first two thirds, but still gripping and you can see events which are going to shape Bond into the character we know later in his career (oh and watch out for Dan finally getting to say the immortal words “Bond. James Bond”). Eva Green is delectable as the main Bond Babe and Dan Craig spends plenty of time in his swimming shorts showing off a very toned body; in fact in a sexual role reversal he emerges from the waves on a tropical beach as Ursula Andress did way back in Dr No (and the gorgeous Halle Berry did in a homage scene in the last Brosnan Bond flick).

I thought Craig was excellent in the role, managing to convey a less experienced Bond but also one confident – sometimes over confident – and much closer to the more brutal, almost public school bully character Fleming wrote and Connery portrayed more in the earliest movies before that edge was lost. Short version of this: Casino Royale rocks; it’s tight, gripping and as toned as Dan Craig’s abs.