This review was originally written for The Alien Online back in May of 2004 for a non fiction book by Dez Skinn, a very well known and respected name in the British comics industry (the man behind Comics International and Warrior – where V For Vendetta began life – among many others), on the underground comics – or comix as that field is normally spelt – scene which produced some incredible work and, as underground scenes often do, reflected the grassroots changes going on in segements of society at the time that would be reflected a bit later in mainstream society (as Dick Hebdige once put it with subcultures, they start off as unusual and transgressive, against the mainstream norm, eventually accepted more then elements of them will be subsumed into the mainstream culture). 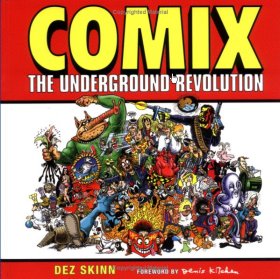 At first glance this may appear to be a simple history of underground and Indy comics. In lesser hands it may well have been, but Dez Skinn has decades of experience working in comics and has clocked up even more hours as a fan. He brings both to bear here, describing not only the evolution of underground Comix – the ‘x’ spelling singled them out from the mainstream comic books with their ‘approved’ labels to reassure parents nervous of their children’s reading – but skilfully relating this to the myriad of social and cultural changes which society has undergone in the last few decades.

In my opinion this approach is what elevates Comix from being an interesting genre history to a truly fascinating book. Any artist worth their salt knows that no medium exists in isolation to other media or to cultural changes in society. Skinn doesn’t just give us a chronological overview of unusual and challenging new comic strips which were written by disaffected – or often stoned, or even disaffected and stoned – writers and artists. Instead he takes us through the periods which spawned them and the people who were shaped by – and indeed went on to influence – the events of the period.

The psychedelic sixties with rock’n’roll, mind-altering drugs and sexual experimentation obviously had a profound effect on the first wave of comix and their creators. However, the actual infrastructure of the sub-culture not only inspired the likes of Crumb, it supported them. Hippie ‘head’ shops offered an alternative to hawking your comic on the street when regular comic stores and news-stand vendors wouldn’t touch them. Many of the cartoonists were also creating poster and album art for the music groups of the time; the music, the stores, the comix, all feeding from and into each other. Crumb was asked to do the cover for a Janis Joplin album and agrees on the proviso that he got to squeeze her breasts. Rick Griffin’s psychedelic poster and comic book art was embraced by the emerging surfer scene (and vice versa).

By the 1970s Comix were opening up in a way that the mainstream comic books – principally superhero strips or ‘funnies’ like Sad Sack – could never hope to (although Stan Lee had a bash, with some stories clearly refencing real world concerns), reacting to the changing face of society, driven by the fact they were being written and drawn by the generation who were doing the changing. The 1970s saw some Comix embracing the rapidly expanding Women’s Lib movement and also Gay Liberation. Female writers and artists, tired of the male domination even of the supposedly progressive underground scene set up their own Comix.

Tits’n’Clits and Wet Satin explored women’s issues, including the oft-covered Comix subject of sexual liberation, but from and for a woman’s perspective. Some, such as Abortion Eve covered sensitive moral subjects, offering differing viewpoints, opening up discussion and dispensing advice which was not, let’s be honest, widely available to young women in general society. While celebrating this, Skinn also makes no effort to hide the fact that the new ‘Wimmins Comix’ faced even more trouble with censorship and a lack of understanding than the male-dominated strips. Actually, sometimes from them – one female title had trouble being printed because the printer, who happily produced the like of Crumb’s giant orgy strip, deemed these ‘obscene’. I guess what they say about some men being scared of a woman in control of her own life can often be true. Fortunately the sisters did it for themselves, long before the Riot Grrrrrl generation thought they were something new and unique.

Space doesn’t permit me to cover everything contained in Comix, alas. Suffice to say that this is an engrossing read for anyone interested in the history of comics and of socio-cultural changes in the last forty years. Sexual freedom, women’s liberation, Gay emancipation, freedom of speech (the amount of court cases, often purely driven by conservative reactionary authorities and not real legal cause, is astonishing), anti-war protests – these comix were very much a part of the changing face of post-’60s society. Indeed they both reflected the changes and were also themselves a part of this history.

However, this volume is not simply a nostalgic look back a few decades to a ‘golden era’ of underground Comix. Nor is it all dominated by the US talent. The British scene is well catered for (only knowHunt Emerson for his Firkin the Cat strip for naughty adult mags? Think again) from little-known, short-lived strips to Punk-era icons who became – and remain – huge, like Judge Dredd (2000 AD may have come from a mainstream publisher, but Dez argues for the punk roots of the comic & many of the strips and I tend to agree). The book brings us right up to the modern day ‘children of the revolution’ in the shape of the work of Dan Clowes, Joe Sacco, Alan Moore and titles like Milligan and McCarthy’s powerful, hammer-in-the-face Skin (one of my personal favourites and long overdue a reprint), Deadline and the birth of Tank Girl. Would they exist, at least in their current form without those Comix of the ’60s and ’70s?

Despite years of legal harassment by ‘square’ authorities in the UK and US (the notorious Oz trial is a standout example) independent, groundbreaking Comix are still going strong today. As long as there are issues to be dealt with that mainstream society can’t, or won’t face there will always be a market for these and writers and artists who will cover them. And like most subcultures, if they stay around long enough they start to leak into the mainstream society which originally was hostile to them – witness the Pulitzer prize for Spiegelman’s magnificent Maus, Chris Ware’s Jimmy Corrigan winning the Guardian First Novel prize, or Joe Sacco being feted for his international political coverage in Palestine and Safe Area Gorazde in mainstream, broadsheet newspapers. Hell, even the original material is still popular – I still sell Fabulous Furry Freak Brothers from my bookstore on a regular basis thanks to champion publishers like Knockabout keeping the flame alive.

With all that’s going on in the world today there is still a huge need for these types of publications. Jesus Meets the Armed Services may have spoken to the Vietnam generation but it could be just as pertinent to the War on Terror generation. Bush’s right wing Christian friends, trying to restric family planning and a woman’s right to choose, are exactly the sort the ‘Wimmins Comix’ fought against in the ’70s. In a nice example of the ongoing cultural war Skinn tells of Gilbert Shelton moving out of modern America and away from Bush and his cronies to live in France. Where, in a fine example of how these societal attitudes differ in Europe, the French government approach him to use his Fat Freddy’s Cat characters for a national Aids awareness programme. Who says you can’t change the world, at least a little bit?

This is a totally absorbing history. Illustrated throughout with fabulous artwork, from Crumb’s scratchy, heavy inked drawing to Rick Griffin’s glowing colours, it is also a visual feast. It’s often terribly funny, sometimes sad (so many drug overdoses or motorbike crashes) and will on occasion raise your ire at the injustice of the treatment meted out by frightened authority figures who are terrified that freedom of speech does indeed give power to the people. Keep on truckin’, brothers and sisters.