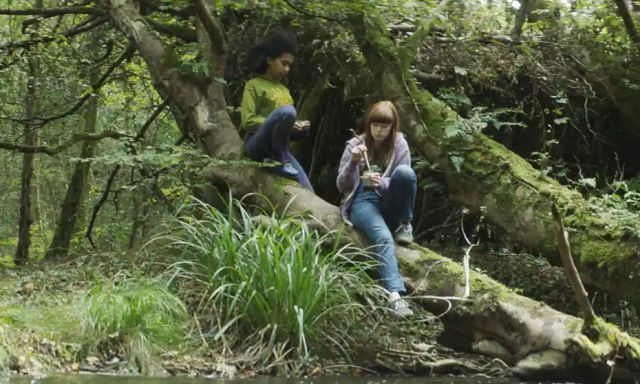 It’s the summer of 1997, and best friends Grace (Niamh Walter) and Asta (Nyobi Hendry) are going with Asta’s mother, Kate (Rebecca Palmer) for a break in Cornwell. It sounds like an ideal piece of childhood fun, a little while away with your bestie, free from everything else. But Niamh is dealing with problems, not least that her father has left her and her mother (the trip may be as much to give her mother some space as it is to give Grace a holiday). In fact her father is glimpsed only at the start, reading her a bedtime story – Penelope waiting for the return of Odysseus, which turns out to be prescient given his departure soon after.

Added into this emotional stew, the girls are approaching their teen years, and are in that strange, liminal space, still children for the most part, but adolescence and puberty are beckoning; they still want to play games like kids, but they’re also starting to talk about boys and sex, in that hushed, overheard-in-the-playground half-truths many of us will remember from those early years. One foot still in childhood, the other stepping very uncertainly into becoming older but not quite sure where to step or where the path leads. Millar and her young cast capture that feeling very well, that urge to be seen as more grown up while still partly wanting to hold onto elements of your childhood, something we’ve all been through. Even the mis-en-scene quietly, effectively evokes this as the camera circles Grace’s bedroom, a mix of childish interests any young girl of the time could be into, but also hints of interest in older age elements, like make-up; it’s a small touch, but effective, and also signals that tiny budget or not, there’s a lot of care and attention gone into the production.

While the girls play and talk – Grace is going through a religious phase and Asta enjoys spooky, supernatural stories, and these bleed into their imagination and play – what seems like a carefree break in the countryside slowly reveals the fault lines below each person’s emotional life. Even Kate, the Bohemian mother of Asta, who seems to radiate a positive, easy-going confident demeanour, has relationship problems. We’ve all had that feeling that that other people around us seem to have this life thing figured out much better than we do, although we all know that really everyone has problems; Palmer’s performance brings that out nicely, just a few cracks here and there subtly signalling that really she’s going through the same as everyone else, everyone has problems, that’s just life.

Zaqi Ismail’s Sid joins the small cast in Cornwall, sleeping rough in a little forest den the girls had made, after a misunderstanding by the girls (letting their imaginations out of control), Kate invites him to stay with them for a while, and he soon establishes a friendship with each of them, but of course introducing a man into this female environment also adds to the emotional complexity – it starts to become clear that Kate, more emotionally vulnerable than she at first appears, is drawn to Sid, and while Grace is too young, she is, perhaps, just old enough to feel some little pangs of jealousy when she sees Kate flirting with him.

While much of this is a coming-of-age tale (especially for Grace), the inclusion of the problems of the adults nicely balances this, hinting that it’s not just the adolescents struggling to know what they want, how to get it, how to act, who to be with, that’s just a life problem regardless of your age, and perhaps we shouldn’t beat ourselves up so much about it. You could also read Summer in some of the terms of a horror film – it’s not a horror, per se, but it uses some elements and stylistic riffs quite effectively, evoking echoes of British folk horror, which works very well, all nicely done in a fairly low-key way through good cinematography and soundscape use. An effective and emotional directorial debut; I look forward to seeing more work from Millar.

Summer in the Shade is streaming online now.