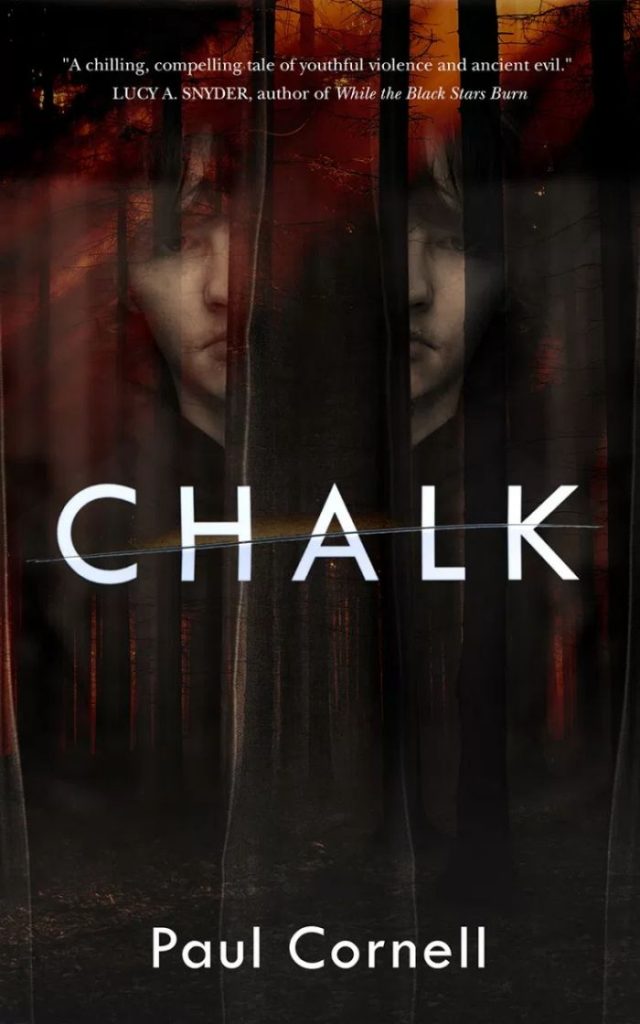 The great publisher of SF&F, Tor, has been doing a cracking run of shorter books recently, some by new talent, some by existing, some very short (like 90 page novellas), some a bit longer (as is the case here, although still a bit shorter than many modern novels – which is a good thing, actually, it’s just the length it need to be, nothing unnecessary). When this one arrived on my desk it went straight into my eternal tottering pile of must-reads because – well, it’s Paul Cornell. And I also had that mysterious vibe, the bookseller’s Spidey sense, that just whispers to me sometimes that this is a book I need to read. And yes, I did need to read it (bless you, Spidey-sense, you never lead to anything less than a great read).

Andrew Waggonner is a schoolboy in the early 1980s, at a private school that’s seen better days,  in rural Wiltshire, and like any school anywhere there are all the usual things any kid has to try to juggle – the expectations of parents, indifferent teachers “preparing you” for life, the different social castes of your fellow schoolkids, avoiding the bullies, wondering about the opposite sex with a mixture of eager desperation and terror, about trying to figure out who you are, or who you want to be, and, this being school, how not to have any of that stand out too much in case you get picked out as different, listening to music and trying to make sure it’s the “right” music – music that the other kids will approve of and not make fun of you for listening to.

Like pretty much every school ever there is, of course, a bully – Drake – and his clique all desperately trying to make themselves look hard in front of their leader. But when Waggonner becomes the target for their violent urges, they overstep the mark, going far beyond the normal name-calling or hitting to something much worse, far more damaging, both physically and emotionally, something that scars both victim and perpetrators. And it will have repercussions. Nobody here is entirely good or bad, entirely villain or victim; as Chalk unfolds, rather satisfyingly they become elements of each.

At only 265 pages I don’t want to go into too many plot details, because this is a beautifully compact, self-contained work and to describe too much of the events, especially that key moment of bullying abuse, would be to spoil too much. Suffice to say that it is extremely disturbing, even to a seasoned horror fan, and the chain of events it sets in motion, rippling forward is equally disturbing and unsettling. The story oozes a creeping sense of horror, and a sense of an inevitable dread, like something from Poe, that feeling of the world moving off-kilter with a slow but unstoppable, irresistible force, of darkness becoming visible.

Set in the West Country, Cornell makes great use of the location – this is ancient landscape, both natural chalk downs and the landmarks made by the hand of man, ancient man, like the eerie, haunting chalk figures, the great stone circles like Avebury, or West Kennet Long Barrow. This is a region steeped in the arcane, the ritual, myth and magic since the neolithic days of our distant ancestors and anyone who has walked there will be well aware that those long-distant times can still raise a tingle on the back of your neck, a feeling of … something… The people here were an old people long before Rome’s Legions marched across the land. There’s still a sniff of magic in the air now that even a modern world of motorways and television doesn’t erase, and what happens if that ancient magic starts pushing into the modern world, reshaping it?

Chalk bleeds atmosphere, a slow-burn build towards a satisfying, well-paced, faster and faster urgent climax that could go one way or the other, the sense of place and history and myth almost palpable. The atmosphere of 80s school life is just as well articulated by Cornell – Doctor Who on a Saturday night, the hidden world of classroom cliques and groups that no adult (parent or teacher) can protect you from (or often even wants to know about), and, this being the 80s, listening religiously to the Top 40 each week, because this is an era where the radio and singles are how you get your music (no multi-channel digital streams here, this is an era where the school is just getting its first Dragon 32 computers) and it is vital to know what the latest number one is in case another kid asks you. It doesn’t wallow in nostalgia, but it does evoke the era extremely well, and I found myself having more than a few flashbacks; Cornell invests the settings, character and tales with a personal touch that makes the reader empathise all the more (even the bullies are fully-realised, not cardboard cut-outs but complex, contradictory human beings).

There are moments of sharp horror, of violence, blood, fire, some from the now, some echoes from the distant past, but still recorded into the very landscape, almost like Kneale’s Stone Tapes (I found it also, for me, evoking something of another creepy tale of that era, the Children of the Stones). But mostly Chalk, like much of the best horror stories, thrives on atmosphere, the type that gets under your skin, of a growing disturbance, both personal and more widespread across the land, slowly but inevitably building; a creeping horror, the ancient meshing with the modern, a sickening sense of dread cresting like a dark wave that, sooner or later, must hit the shore….