With the clocks going back it is darker earlier each evening here now. Some find this depressing, the long, dark nights. I quite like it, and it is a good chance for some night photography! Sometimes I am out with the tripod taking them properly, other times they are often improvised, taken on the way home from work when I have no tripod handy so I go handheld for rough shots or use things like railings and pillars to sit the camera on to steady it in lieu of the tripod. This is an improvised shot by the Union Canal, the steel skeleton of a new building under construction on one of the last brownfield sites left from the former Scottish and Newcastle Brewery complex which used to dominate this area for years.You can see the flat-topped railing I used to sit the camera on to steady it in the image: 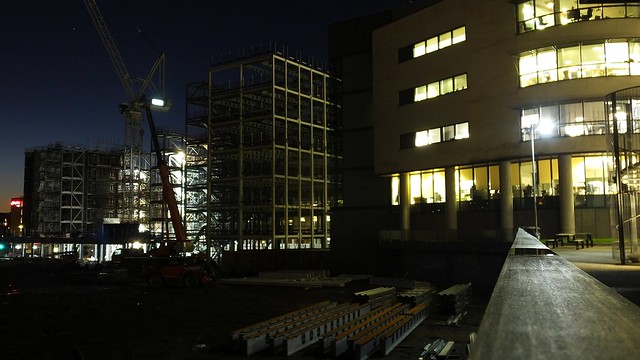 Another improvised shot on the same night by the Union Canal, bracing the camera against a mooring post to get this image of this houseboat at night – how cosy does it look against the cold, dark night? And below that a short from just a few feet further along looking to the old Leamington Lift Bridge. 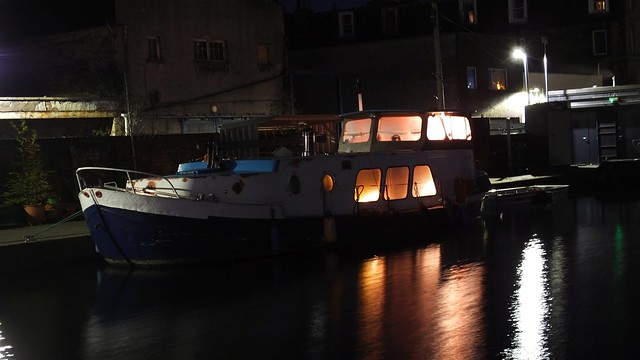 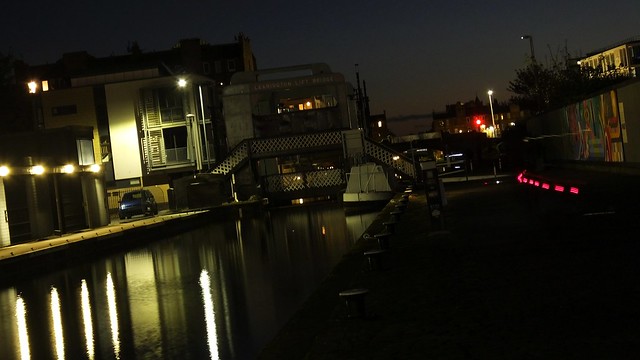 Rough handheld shot in lowlight mode at dusk in Bruntsfield, looking into the windows of Project Coffee – I think for this kind of pic the roughness of the freehand shot actually works: 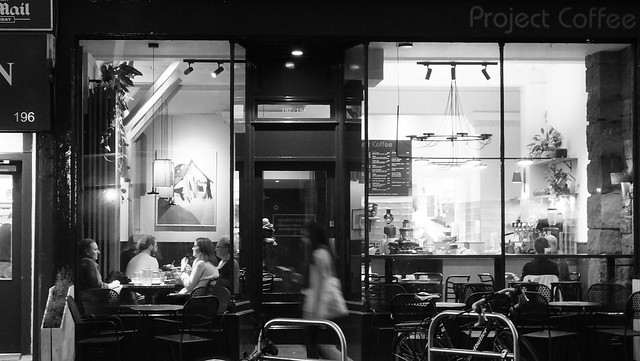 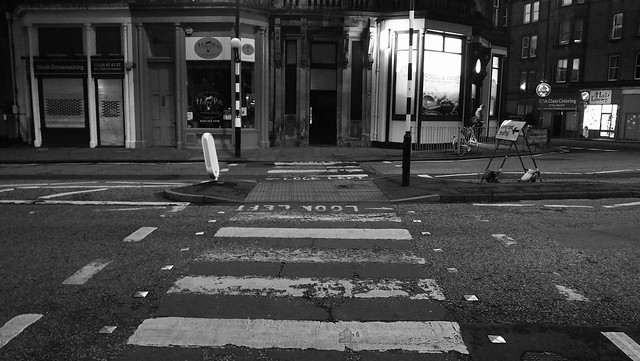 Another handheld shot, this is the Telfer Subway at night: 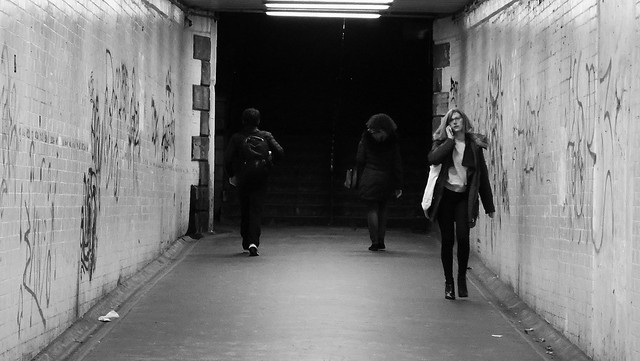 Heading down through the lower part of the New Town to my book group, had been raining a little and the cobbled roads by Drummond Place had that glistening look to them under the street lights: 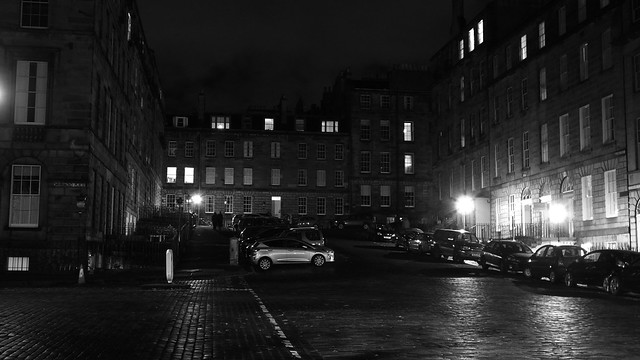 Walking through the old boneyard of Saint Cuthbert’s at night – peaceful very dark and quiet and yet only a few steps from busy Lothian Road and Princes Street, bustling with people and traffic, yet down here the quiet of old tombs, the crunch of fallen autumn leaves and so much darker than it looks in these pictures where I could do long exposures. The things you spot, different little realms just a few steps away from busy main streets, if you go a few steps off the main thoroughfare in Edinburgh: 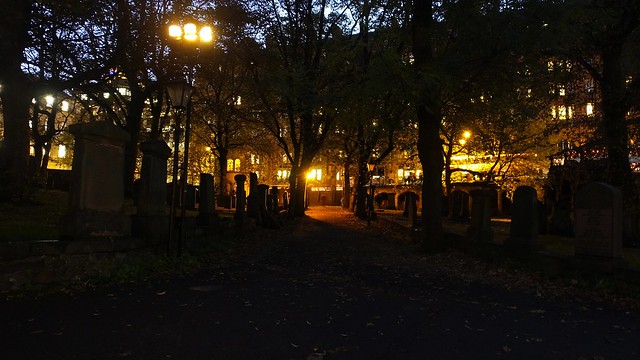 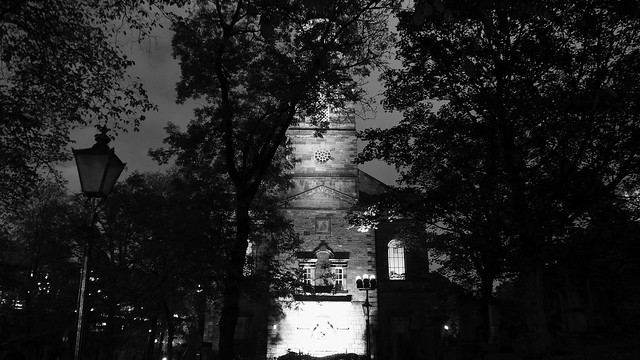 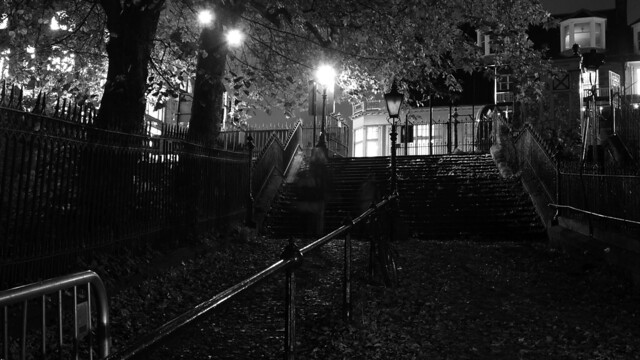 And look a the view of the Castle you get from the old graveyard: 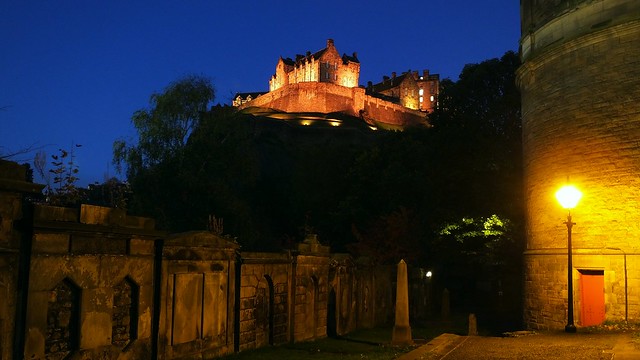 And here’s one taken with a new toy, a cheap LED light panel that fixes to the camera’s flash gun shoe – I turned it on and took a walk through the old graveyard near my flat. The middle is deliberately allowed to become overgrown to become a mini urban wildlife area, and during the day you can hear all sorts of sounds, from twigs snapping to branches rustling. At night you hear even more of it but can’t see the animals making them, just hear the sounds from the undergrowth between the older tombstones. In the darkness of the walled boneyard, you can imagine how creepy that feels, as if something is following you through the cemetery. For added effect I took these on the way home on Halloween: 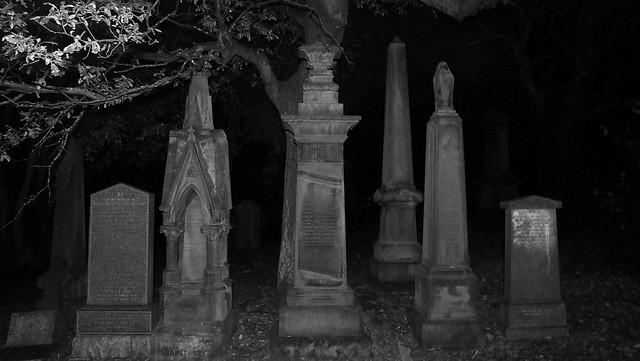 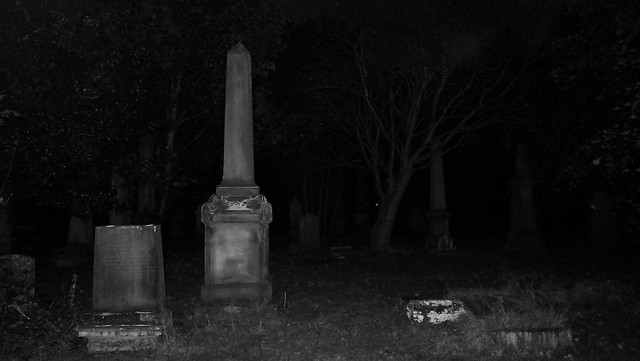