Memory: the Origins of Alien,
Directed by Alexandre O. Phillippe,
Exhibit A Pictures 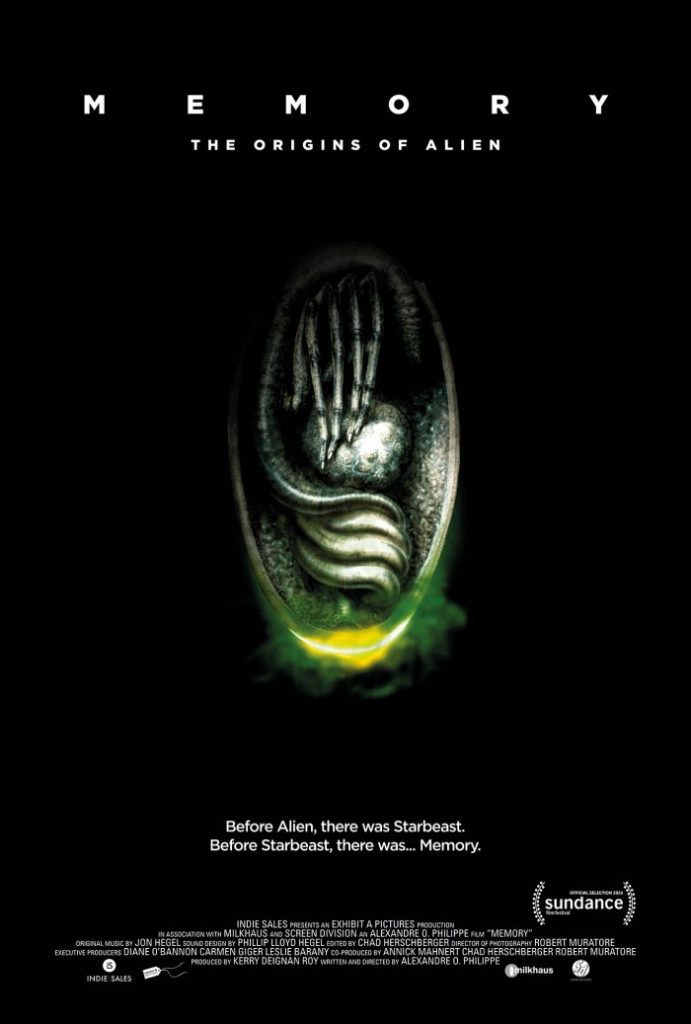 Hard to believe, but here we are in the last third of June and that means Edinburgh International Film Festival time. My first screening out of the bunch I have booked was Memory: the Origins of Alien. You may know director Alexandre O. Phillippe for some of his very interesting previous documentaries, The People Vs George Lucas and Doc of the Dead (both highly recommended), and here he and his team have created another fascinating set of insights – this is not a standard making-of approach, rather this is an exploration of the myriad of people involved in the gestation of this now-iconic film, their thoughts, their inspirations, their dreams, their nightmares, the ingredients which would coalesce into the film Alien.

As anyone who has ever had to study Alien for an essay will know, it is one of those films that is replete with elements that can be endlessly debated and discussed, and some of those you are likely familiar with already, not least the surreal, dream-nightmare imagery of H.R. Giger, with its biomechanical, highly sexual motifs, which dovetails with other sexual aspects of the narrative (the “baby” alien chestbuster looking like a penis with teeth, as actor Veronica Cartwright put it, the “male rape” and insemination and the abomination of a birth), or the real-world parasitic insects which lay their eggs within other insects to feed from within then burst forth at birth inspiring what is now one of the most fabled scenes in cinema.

(above, the Furies, below, paintings by Francis Bacon, which fed into the idea for the chestbuster version of the Alien)

But Memory, while exploring these qualities, dives deeper, into the stories and myths that influenced Alien’s various creators, taking us from the Furies of Classical Greek culture (a beautifully shot scene takes us from Delphi, the “navel of the world” into a cave which becomes like an Alien set, right down to the laser beam from the egg cavern, except here the Furies wait below that glittering beam) to the paintings of Francis Bacon. Various talking heads comment, from academics to some of those personally involved, such as editor Terry Rawlings and art director Roger Christian, or co-writer Ron Shusett, with some clever use of archive interview material to allow some who have passed on, such a Giger or co-writer Dan O’Bannon, to be a part of the process, while others who worked with them also give us more insights into how those creators shaped their work, from early drafts, O’Bannon;s work with Carpenter on Dark Star and even his time with Giger on the Jodorowsky attempt to film Dune, all filtering into the eventual ideas in conjunction with the other film-makers.

As you may expect O’Bannon gets a lot of the running time here, as the original story creator, and we hear from his widow and from Shusett about “Star Beast” and how he knew he had something but he just couldn’t get past page 29 on the script, so Shusett pitched in, and the now-famous chestbuster scene was born. This scene, understandably, also takes a fair amount of the running time here – everyone involved, from the early drafts of the script (studio execs not being overly impressed until hitting that scene and experiencing their WTF moment) through to setting up of the actual scene, the puppet, the effects and filming it, they all knew this was where the film would live or die. It may now be one of the most well-known and important scenes in film history, but they had no way of knowing that when crafting that moment, and it is truly fascinating just how much went into its creation, from so many people. 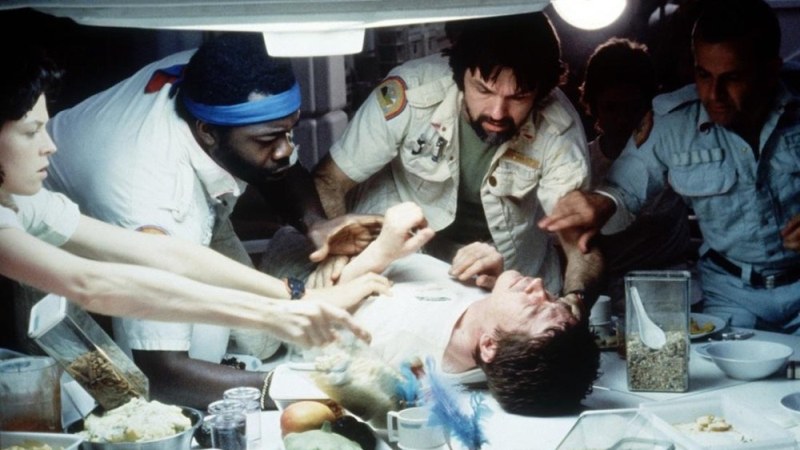 (above, the now iconic chestbuster scene from Alien, below some early concept sketches for the scene, bottom: writer Dan O’Bannon on the Nostromo set) 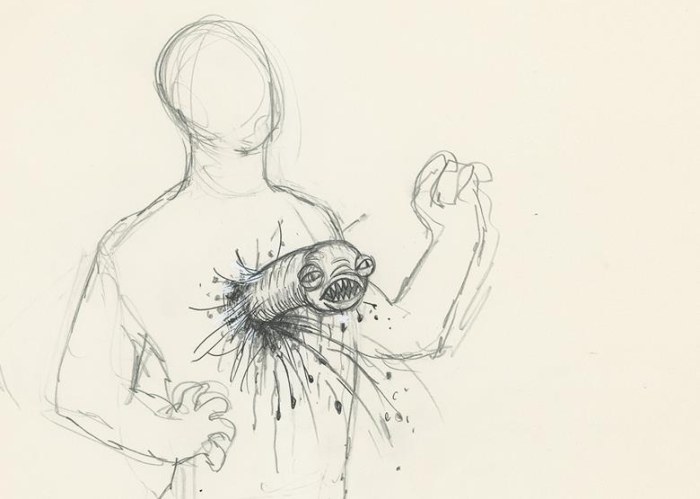 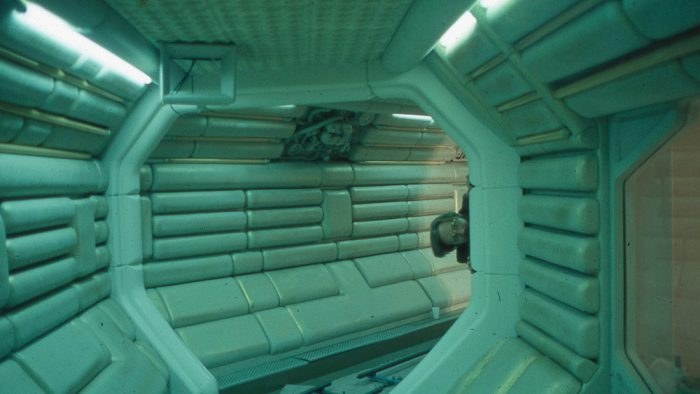 And as for that iconic scene, so too for the whole film – Memory rather deftly tugs on the many different strands that went into the making of what we saw on the big screen, from childhood reading habits to art influences, to friendships or arguments that opened some doors or pointed people towards others. Of course all films are a gestalt entity – too often the director and the stars are the only ones focused on by the media, but those of us who love cinema are very aware of the huge amount of talents that go into the making of any film, and Memory beautifully, warmly. and with great respect for the creative process, shows how all those individuals, with all of their own histories and ideas and influences, work together to craft a feature film, in this case one that is now forty years old and assured of its place in cinematic history.

The EIFF screening also boasted a short post-show Q&A with producer Annick Mahnert who has worked with Phillippe before (he often uses a lot of the same team), and it was interesting to hear one of the team talk about how they brought together so many different strands of influences and people’s recollections to put together Memory, and she also let us know that their next film, which is mostly shot already but is now going into editing, will be about William Friedkin and the Exorcist, so I shall look forward to that.

Oh, and in case you are wondering, the “Memory” title comes from a very early version of the story by O’Bannon.