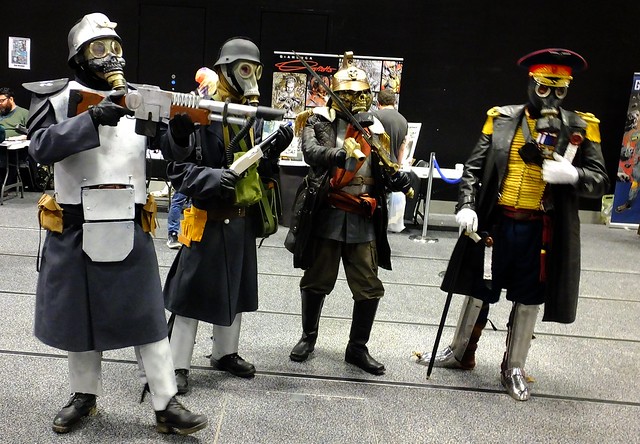 Over the weekend I was enjoying the 2018 Edinburgh Comic Con, again at the rather good venue in the city’s conference centre, which offers up plenty of space. I’m sure I’m not the only one who has memories of some conventions which were fun but the space was so tight that as you walked down one side of an aisle of dealers and artists you were bumping into folks trying to go the other way. That’s not the case here, and it was something I appreciated at last year’s con and again this year – space to move around between the rows of tables and displays (also it saves the place from feeling to hot or airless with all those folks in there). The space also meant room for some larger exhibits to enjoy, like the Delorean from Back to the Future, a full sized TARDIS and Daleks to pose with for photos, or a recreation of the famous magical platform from Harry Potter. 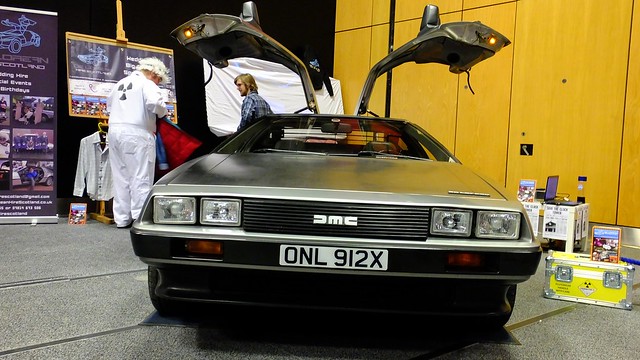 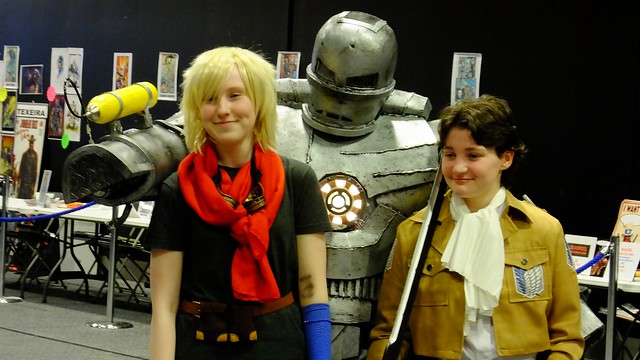 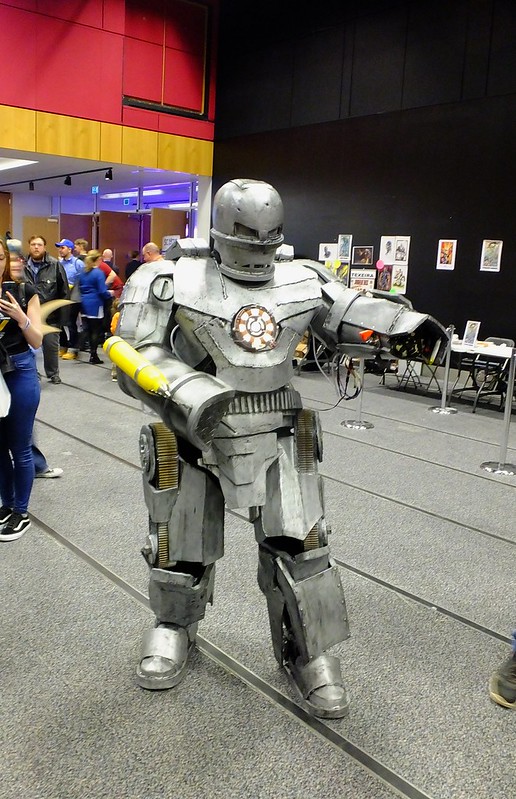 As with last year there were two main halls, both very large and spacious, most of the writers and artists and small press folks in one side, the other most dealers, plus plenty of interactive fun to be had from card-based gaming like Magic the Gathering to war gaming, and from classic arcade video games to the latest VR gaming (all of which was, as you can imagine, great for the younger ones). I was there with a friend and his two young boys, who showed little interest in the classic arcade machines (we were more excited than they!), but they did like the VR machines, and the Lego displays certainly caught their attention. 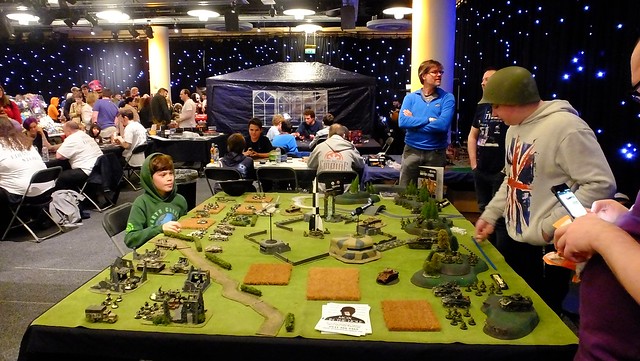 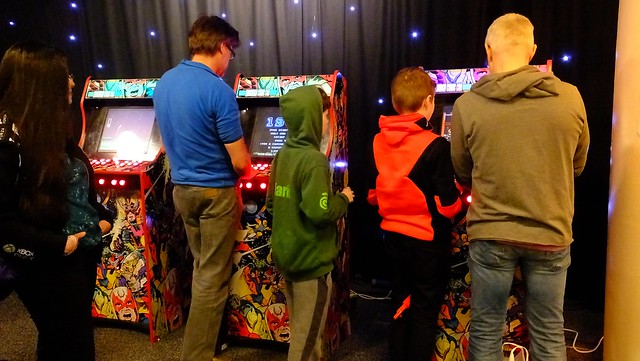 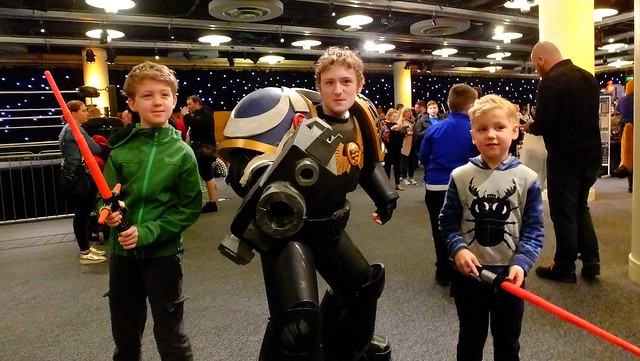 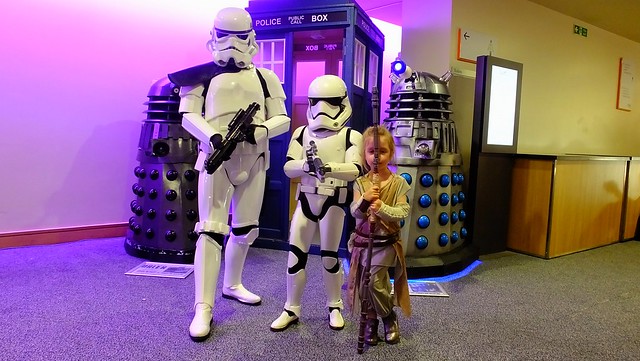 While the boys were enjoying the VR gaming I had another walk around the artist’s hall and chatted to some of the folks there. I was pleased to see Accent UK’s Colin Mathieson and have a wee catch up with him and we were joined by 2000 AD veteran Colin MacNeil who I hadn’t seen in some time, so we all had a nice natter. I spoke to a bunch of other creators too, including Gary Erskine (before he was off to give a masterclass at the con), Steven Ingram (I’ve bought some of Steve’s mini comiucs before, this time he had a new collected edition of his serial, so I had to treat myself), John and Clare Ferguson with their latest Saltire comics and more. I also got to meet Dan McDaid in person, which was nice – I’ve known Dan online for a while but it is always nice to get to meet folks in person! Most said they had done good business, especially on the Saturday, with the Sunday (when I was there), being a little quieter by comparison, but a couple told me the Sunday, although less busy than Saturday, was busier than the Sunday last year, not sure if that was more visitors in general or more that people attending had realised it was a full weekend and they didn’t all need to press in on the Saturday. 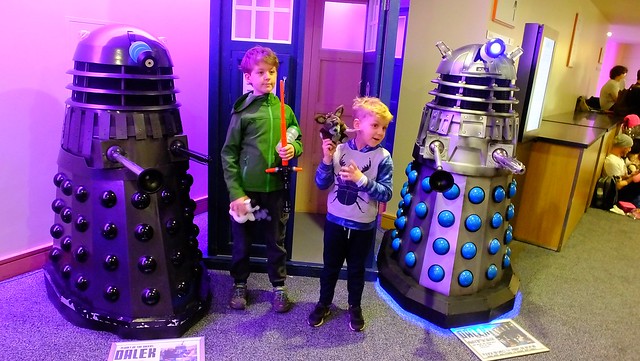 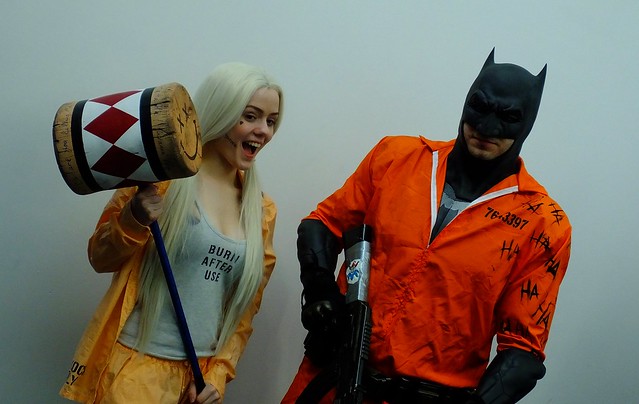 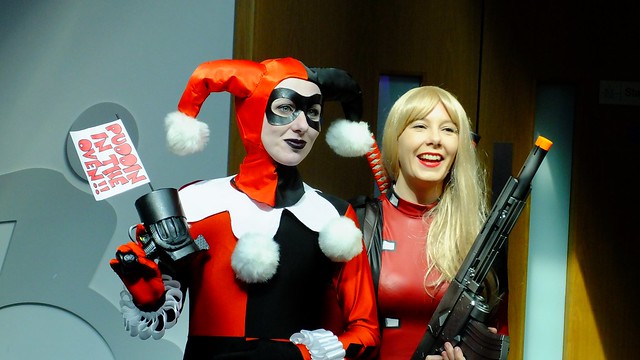 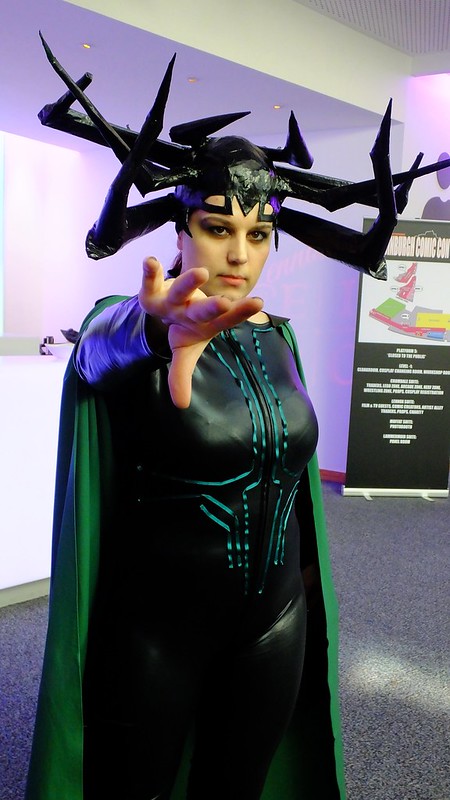 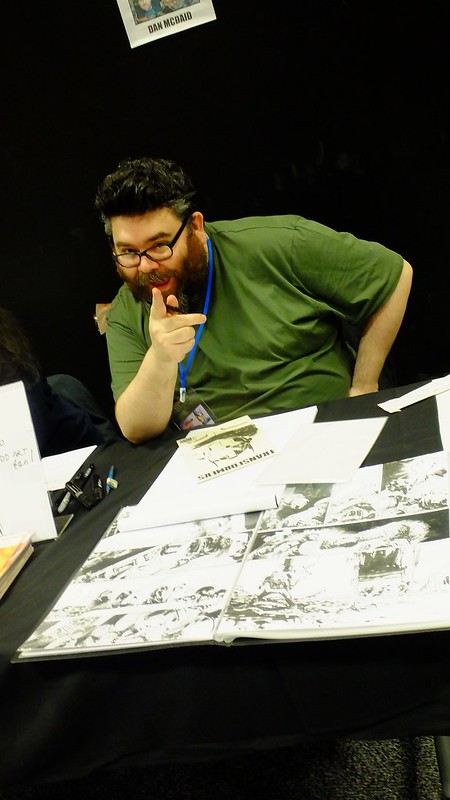 (Above, Dan McDaid, below: Gary Erskine) 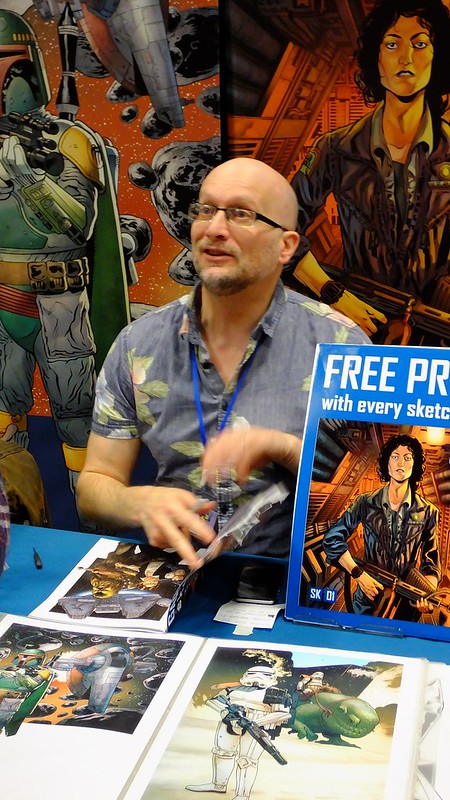 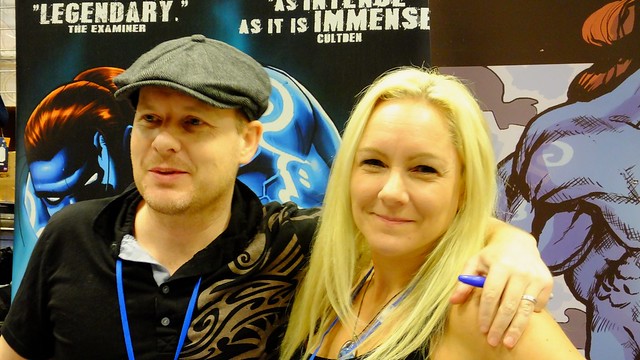 (above, John and Clare Ferguson with their Saltire comics, below, two comics Colins for the price of one with Colin MacNeil on the left and Accent UK’s Colin ) 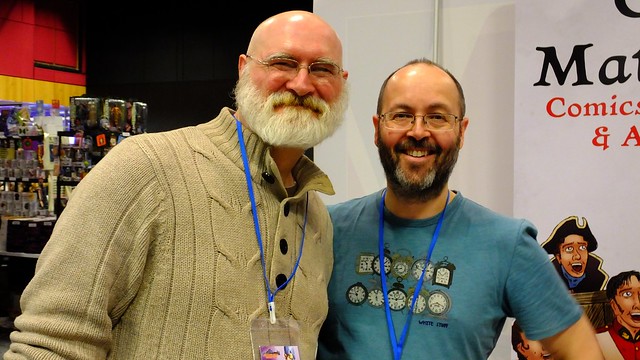 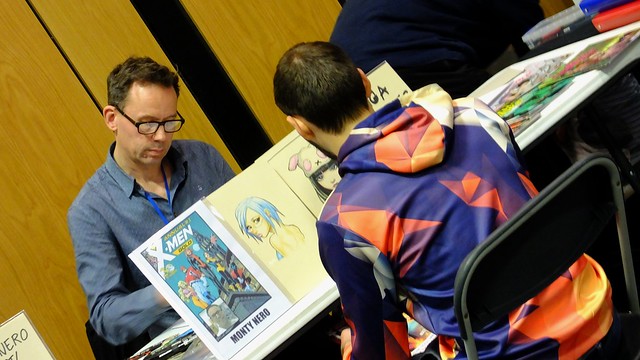 Of course there were lots of cosplayers there, from little kids in store-bought costumes to the serious cosplayers who make their own designs, some of them quite unbelievably elaborate and detailed. My friend and regular cosplayer Louise introduced me to several of her friends who had assembled as the Avengers. They told me the day before they had a photo shoot at some of the locations in Edinburgh used in the upcoming Infinity War movie while they were in town, which sounds like a great idea. Like last year I thought the event had a good family-friendly vibe to it, and I was delighted to see some family groups doing a themed cosplay – one family had the dad in classic Star Wars Imperial Stormtrooper armour, his girl in New Order Stormtrooper armour and his youngest girl dressed as Rey – now those kids have a good dad! I’m sure that’s the sort of shared outing they will remember for years, and they were kind enough to let me snap a pic. It was another really fun event, busy, good mix of adults and kids, exhibitors and guests, and it is great to have an event like this in my hometown. 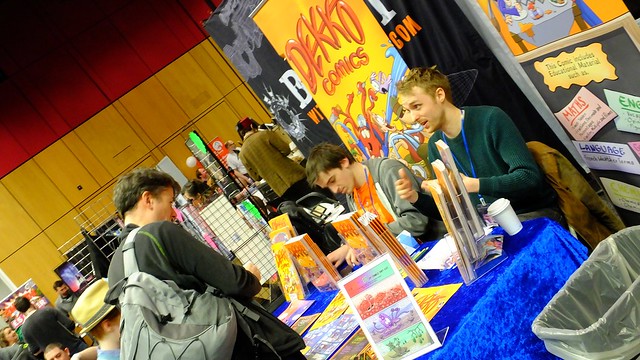 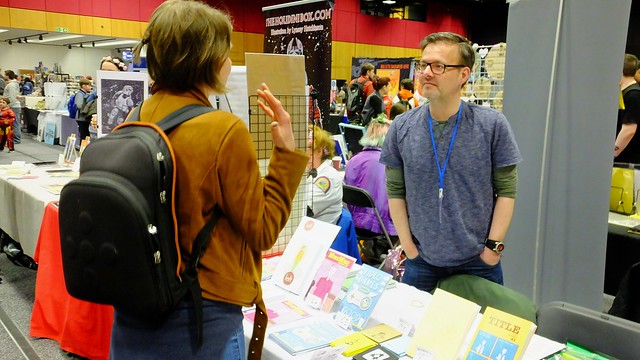 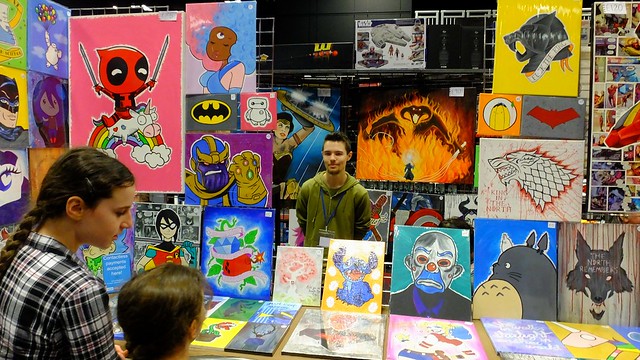 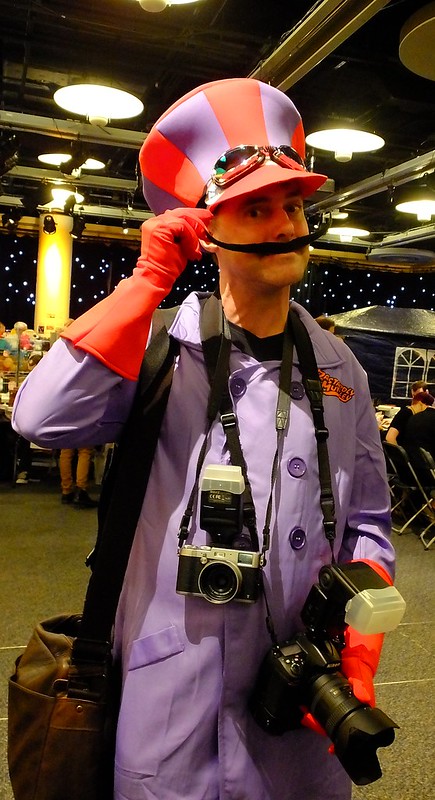 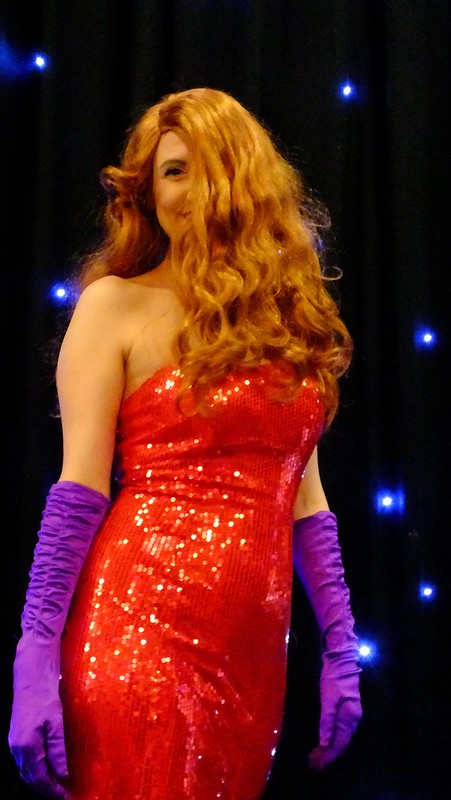 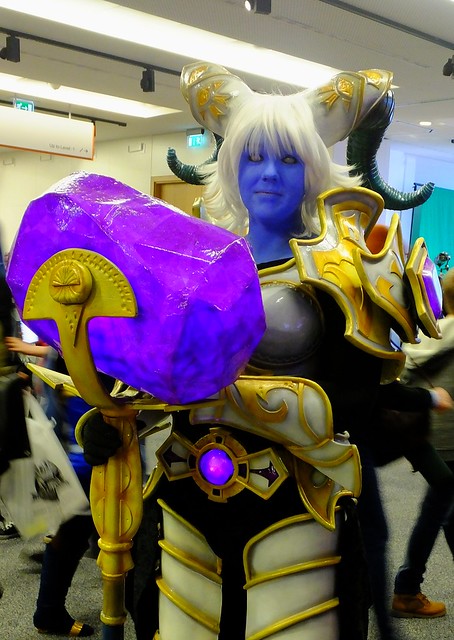 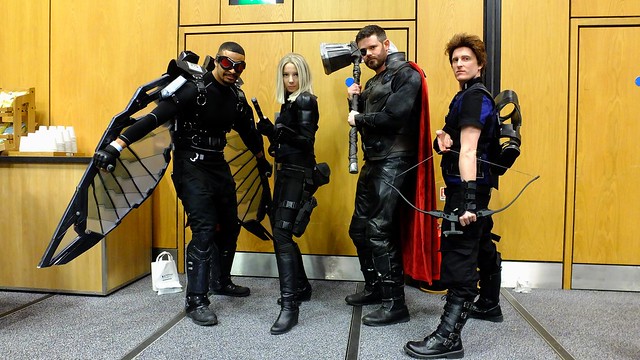 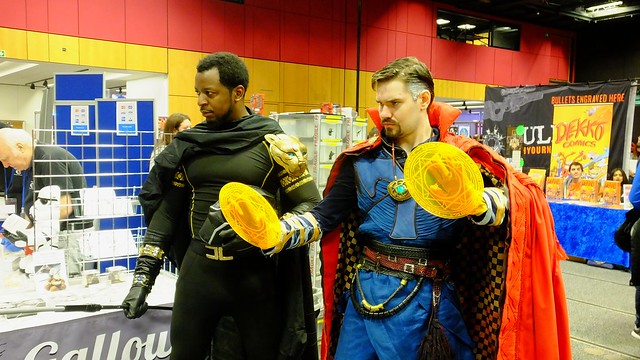 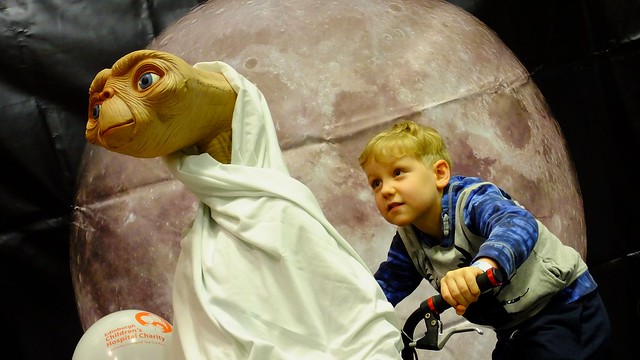 This report was originally penned for the Forbidden Planet Blog