Sad this week to hear about Yvonne De Carlo passing away; she was an extremely attractive starlet in 40s and 50s Hollywood, perfectly matched to the high glamour of that period with her stunning hourglass figure and sultry looks (do a Google image search on her and see what I mean. This was the era of curvy women, no stick figure actresses here!). She played a number of roles as femme fatales and even appeared in Cecil B DeMille’s Ten Commandments epic as Mrs Moses. But it is a Lily Munster, the loving vampiric wife and mother of the Munsters that most of us will know her; Fred Gwynne who played the loveable goof Herman Munster, her screen husband died a number of years back, ironically just as his career was reviving, so in a way I supposed Lily has gone to join Herman. 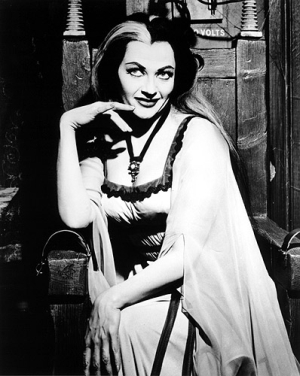 I love the Munsters; along with the Addams Family they really showed that you could have humour out of traditional horror types without resorting to the frankly cheap and laughable (in the bad, non comedic way) that had been tried by Abbot and Costello, while also satirising bigotry about the way even ‘good’ people react to those different to them and pastiching the traditional family while also championing it. From the Addams and Munsters I picked up Edward Gorey‘s Gothic wonders; they prepped me for the comedy horror of Sam Raimi’s Evil Dead and the delights of a number of humorous Gothic comics like Richard Moore’s Boneyard and the works of Tim Burton.

Would we have these works without the Munsters and Addams? I don’t know, but it seems less likely, or at least not the way we did have them. Mostly though I just found them wonderfully funny and indeed I still do; I still watch both shows when they are repeated and never really get tired of them. And Lily Munster and Morticia Addams are still up there with Neil Gaiman’s Death as my favourite Gothic ladies.