This weekend was the final weekend here for a Norwegian friend of Mel and I, Vidar, who came over here last summer to live and work in Edinburgh for a year. Shockingly that is a whole year gone by already – doesn’t feel like a whole year since Vidar and I went along to last summer’s Edinburgh International Film Festival screenings (he was so excited when he got to see Charlize Theron). Where the hell did that year go? So we were off for some drinks and a nice meal over the weekend (La Partenope, which I was last in ages ago, still nice place but if you are a veggie their new menu is a bit lacking in options. In fact there was but one, which surprised me in an Italian restaurant and was not as good as before. Luckily it was yummy, but shame they offered no choice). Drink, food, friends, always a winning combination. So that’s Vidar sailing off back across the North Sea to Norway today; bon voyage and don’t let the trolls bite you when you get home. And do introduce more Norwegians to Irn Bru (I told him he should take some and sell them at a premium as a Scottish health tonic for hangovers, which is kind of true…). 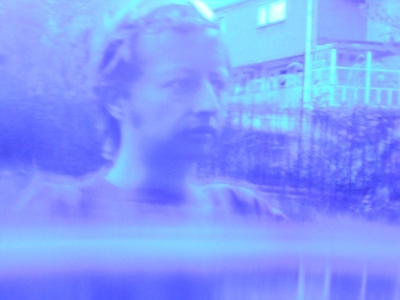 (What Vidar looks like through a wine glass, literally)