A couple of weekends ago I took my parents on a belated anniversary gift of a trip on the Maid of the Forth, which sails out from South Queensferry opposite the Hawes Inn, where Davey Balfour is bundled aboard ship in Robert Louis Stevenson’s superb adventure Kidnapped, then right under the mighty Forth Bridge. 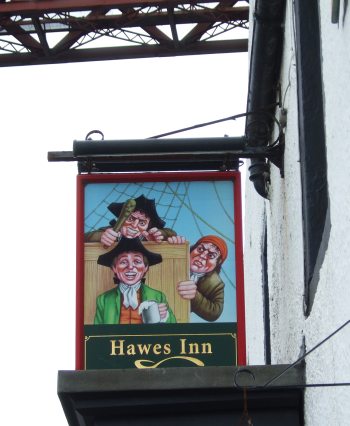 I’ve seen this Victorian marvel of engineering a thousand times but this was the first time I had sailed under it; the real scale of the structure becomes staggeringly real when you are this close, right under the main cantilever sections, thousands of tons of steel hanging in the air above you, foundations driving right down into the river; it took the lives of over 50 men and boys to build it. 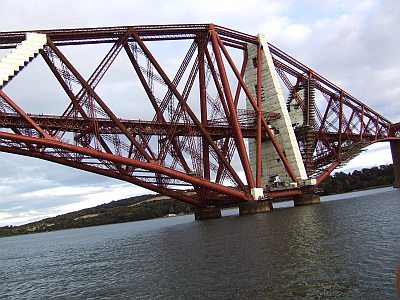 (going under the great Forth Bridge; check my Flickr stream for the full set of larger scale pictures)

From there the boat continues down the Forth, passing coastal towns old and new, country houses and modern oil and gas terminals, international ferries, Edinburgh in profile on one side, the Kingdom of Fife on the other and the Firth of Forth opening out towards the North Sea, islands – or ‘inches’ ranging from mere rocks to larger spots dotted throughout, many still showing marks of war, structures hurriedly added to protect the coast and nearby Rosyth naval dockyard during the two World Wars, now mostly they are full of colonies of seabirds (this whole part of the coast is a huge area for seabirds). History flows like the tidal waters here; Roman ships coming into nearby Cramond for the Antonine Wall forts, vikings, French men’o’war, English raiders, German aircraft – it’s a working river still, tankers, international ferries, even aircraft carriers (HMS Ark Royal sailed down this route just a few months back, just barely fitting under even this high bridge). 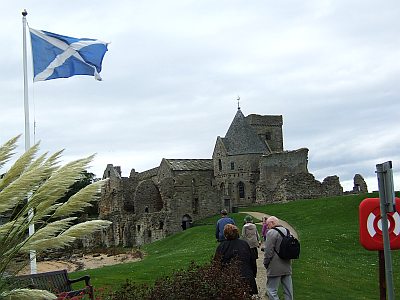 (Inchcolm Abbey, my mum and dad in the foreground walking towards it, the Saltire fluttering in the breeze)

Eventually we come to Inchcolm island, home to a gorgeous 12th century abbey (although some maintain its religious life goes right back to Saint Columba himself, the man who brought Christianity to Scotland in the 500s AD). History and landscape and seascape and wildlife – birds, seals – of my beautiful homeland, a place so near to where I live but a place I had never been to before and I got to share it with my folks. 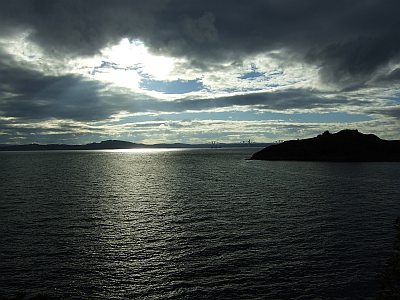 (sunset across the Forth from Inchcolm, the bridges in the distance; nearby some seals were popping their heads up to watch us, waiting on the visitors to leave for the day so they could come up and claim their beaches for the evening)

An hour and a half on Inchcolm wasn’t nearly enough and we want go back again when the new season starts again next year. Afterwards we sailed back up the Forth as the sun set behind the Bridge, shafts of light breaking through the clouds at the end of the day as we sailed upriver, east to west. After docking, as dusk fell on a perfect day we wandered over to the Hawes Inn and settled ourselves down in the cosy wooden interior for drinks and dinner (lovely food, great, friendly service), a perfect end to a perfect day. 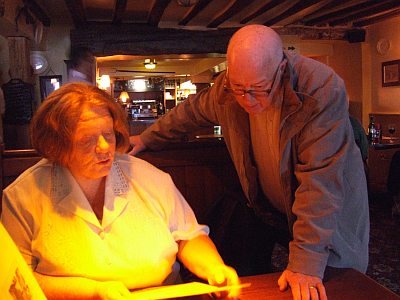