I’ve not blogged for a while partly because I was busy trying to meet friends and catch up before the holidays last week. But sadly also because at the end of the week we were hit by a sudden family emergency when my mum phoned to say my dad had been taken into hospital back home in Glasgow. He had been feeling peculiar, on and off, and mum had forced him to go to his doctor. Typically the day of the appointment he felt fine, but she made him go (this is the woman we practically have to tie up and drag to the doctor’s practise when she feels off) and it turned out to be a good thing she did. Although he felt fine his GP was a bit worried at a heart murmur combined with some dark flecks on his nails which can be indicative of Endocarditis, where an infection enters the body and, as you might infer from the name, attacks the heart, especially the heart valves which is an area of that extraordinary muscle where our white blood cells which fight infections can’t go. When the heat of the surgery made him feel faint she decided not to bother booking him in for a visit in the New Year and just sent him directly to hospital then and there.

We were told not to worry unduly, that he wasn’t in danger, but when a doctor starts talking about possible damage to heart valves it is pretty bloody hard not to worry and I don’t mind admitting I felt physically sick with fear, as if I had swallowed a bar of lead, a heavy, nauseous feeling inside just worrying about anything happening to my dad. I was due to finish on Friday for the Christmas holidays and fortunately my boss told me just to leave now (thanks, Kenny), so after a quick stop to leave some extra food for the kitties I was straight home so I could go into hospital to see him and so I could stay over with my poor mum who is putting on a brave face but is obviously worried and scared too (and I wanted to be home for her as much as for my dad, think that did help her. She said she’s made up by old bed before I phoned to say I was on the way because she just knew I’d be there). The rest of the family have been great too, offering lifts in and out (even my wee cousin who just passed her test days ago, bless her, phoned to offer a ride in if needed – naturally using her mum’s car and petrol). I don’t have any brothers and sisters, but I have a legion of cousins and aunts and uncles and count myself very, very lucky.

I hate even visiting in hospitals – I hate the smell and feel of the places and I hate seeing someone I love in one, but I had to see my dad. He had been a bit tetchy earlier, I heard, mostly because he hated being in there and wanted home (and this is a man who is almost never rude or tetchy) but he was in better spirits when I went in and the nurses on his ward were very nice and friendly. Much as he wanted to go home the doctor had made clear to him if it was Endocarditis then he had to be treated now; if not treated early it is a condition which could potentially hospitalise a patient for months and be dangerous. You just can’t take chances with infections, especially one that can damage the heart, especially as at dad’s age he is out of manufacturer’s warranty. The doctor also told him he had a bloody good GP to pick up on these signs and send him in promptly, so good call there, Doc.

The bad news: he’s still in there. The good news: he had an echocardiogram – essentially like an ultrasound scan but on the heart – which showed no trace of infection on the organ. Second doctor also joins in for a look and they pronounce what they are looking for isn’t there and he’s not showing other symptoms of this nasty infection such as pains, marks on the palms of the hand etc. Blood and urine tests look clear too, although they put him on an antibiotic drip as a precaution while cultures are grown from the blood for a final check, which takes a couple of days (the senior ward nurse was very helpful when I asked her for the name of the condition so I could look it up, talking over his results, the tests and what they were checking for). If everything continues to be clear, as they seem fairly confident it will (in fact they took him off the antibiotics yesterday, so they must be pretty confident), then his principal doctor will have another look at the blood cultures on Monday and if they too are good then we should hopefully be allowed to take him home. On Christmas Eve. That would be the best Christmas present we could ever have. Although I’m not sure if that would mean we would have to leave him wrapped under the tree till Christmas morning…

Small world: in the bed nearest to my dad was an elderly gentleman who turned out to be from the same part of town as some of my dad’s older relatives from many years ago and who remembered some of them. He was having a slow blood transfusion, the drip feed bag connected to him. He’d asked how long it took and they nurse said about four hours, so he said what if I need to go the loo in that time? Few minutes later several of the nurses come back with those long-necked bottles for patients who can’t leave their beds and they pile a dozen next to him, laughing – nice to see they can joke with the patients and keep their spirits up. I told him if any of the blood they were giving him had a peaty aftertaste to it then it might be some of mine (its all the single malts, good for the blood flow, you know) – it was interesting to see someone benefiting from a blood donation.

You know when you give it that it will help someone, but you don’t normally see it in action. Of course, dad didn’t need a transfusion himself, but he might well have done and frankly that’s another bloody good reason to be a regular donor – you never know when something might happen to the people who matter to you and how they might depend on those donations, so again I’d say to everyone who has thought about but never done it, please, please go in and start donating; you might help a perfect stranger, you might be helping someone at the centre of your world. And it feels good to do something positive for life when there’s too many bad things in the world. And if you find one of your loved ones in hospital (and sadly at some point in our lives that’s likely to happen to all of us at some point) you’ll be bloody glad folks do give blood, so don’t just assume other will do it, go out there and do it yourself.

So fingers crossed we get my dad home tomorrow and we get our family Christmas together. We’re feeling more positive than we were at the end of last week, but obviously we’re still concerned and we’re eager to have him home and worried that some last minute thing will crop up to get in the way, so think positive thoughts for us and if I don’t get a chance to post again before the big day then peace and love to you all. We’ve just passed the Longest Night of the year; slowly, almost imperceptibly the long, dark nights of our northern kingdom will grow shorter and the days longer. Maybe that’s a good omen for us. And after two days of mist and freezing fog today the sun rose bright and clear. I hope that’s another one.

Matters of the heart

No, I refuse to get all slushy for Valentine’s day – just why people associate the slow and painful death of an early church priest with sweeping romance is beyond me and what idiot decided to make it the middle of the month two weeks from payday?? – but I passed this window in the British Heart Foundation’s charity shop, festooned with little paper hearts with messages written on them (I was tempted to write ‘lonely Aztec seeks warm, beating heart’ on one) and a big stand-up of one of animation’s classic ladies, Betty Boop. So a boop-oop-ee-doo to you all. 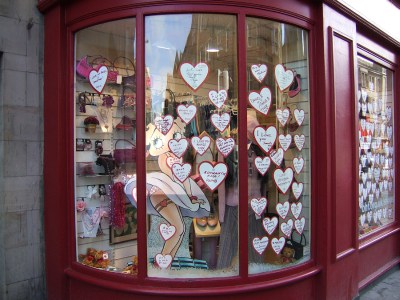 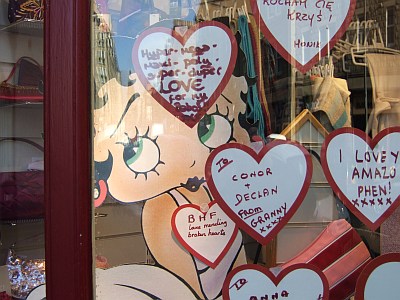