A little box of light and shadow

For the last year I’ve really wanted to get a new camera but just couldn’t afford to splash out; now with some money I was given at Xmas and for my birthday I thought it was about time to get the one I’d had my eye on for a while. It arrived yesterday, which is pretty quick considering I only ordered it on Sunday night – now I have that ‘I have a cool new toy’ feeling of contentment, made all the more enjoyable since it was something I’ve wanted for so long. I love the little Fuji Q1 that was my first digital camera, but it was incredibly basic with limited movie clip facilitiy, no optical zoom, no low light or night settings or, well, anything really. Not that it stopped me taking a lot of pretty good pics with it over the last three years (if that isn’t too immodest) – I’ve put a number of those pics up here and a pile more on my flog over the last few years too. I’ve certainly got my money’s worth out of it and worked it to its limit, now I’ll pass it on to my dad who is a keen photographer but who hasn’t tried digital; should suit him perfectly as a pocket camera to carry round and try out, certainly worked well for me.

The new camera is another compact because I need something small enough to live in my bag – I like to have it around because I love being able to snap pics of anything as I happen to see it. Sometimes I’m looking especially to take photos of something, but quite often I just see something and take a pic, which is one of the things I love about digital photography, the freedom it allows in this respect. If a pic works then great, if not then it isn’t like you are wasting film. The new toy is another Fuji, an E900 Finepix; its quite small but has everything I want in a compact camera, with decent optical zoom, all sorts of modes for different conditions, multi-shots, smart flash modes and a decent movie function that shoots at 30 frames per second so you get good quality (so yes, I’m sure I will be doing some more via YouTube in the future).

It also has a whole parcel of manual functions like my old ‘real’ SLR camera which it’s going to take me ages to explore and you can add different lenses as you can with larger cameras, so it looks like it will be pretty adaptable, meaning I won’t have to replace it in a couple of years, I can just save up and by extra lenses to upgrade and expand it, so it looks like a good buy. And as I say, it is something I have been waiting and wanting to buy for ages, so it is terrific to finally get it. Its even jet black to go with my usual colour of clothing :-).

Actually in size and the black with silvery bits trim it reminds me very much of the first proper camera I ever had, a compact 35MM Ricoh my Uncle Jim, my dad’s late brother who was a keen photographer, got for me. It was the first one that I could take control of and really work to take the sort of images I wanted to when I was about 11 or so. Previously to that I had a slim Kodak 110 Uncle Jim gave me when I was still at primary school – remember the 110 cameras, with their pocket size and little cartridge films you could just drop in? They were the handy cameras for anyone to use back in the 70s. The Ricoh 35MM was my training ground though, just as Uncle Jim intended and it taught me how to work the bigger SLRs with my dad, along with different lenses and ways of working them, which was very handy when I was doing photographic work at college years later (where I discovered the dark room was one of the best places to be when hungover).

Snapped off a couple of shots with the new camera in the dark on the way home tonight to try it out – alas I decided to blow my bday money too late to snap the Xmas lights which are all gone, except, for some reason, these ones next to Edinburgh Castle, so I tried out the low light option to snap them before they go too. Right now these lights are outlining skeletal winter trees, but in only two or three months those bare branches will be bursting with greenery. 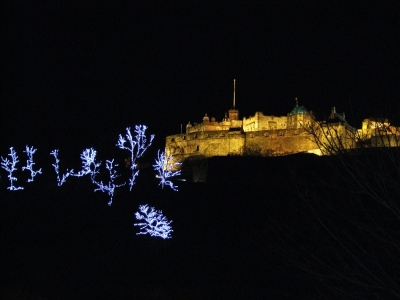 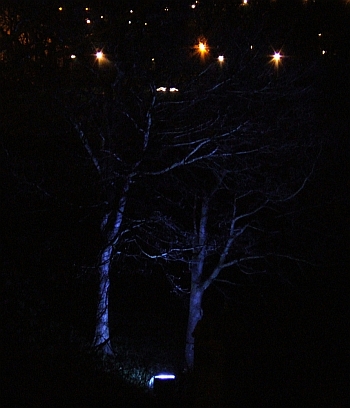 Quick snap through the window from the top deck of the bus of the stained glass windows of Saint John’s – wow, what a difference in the amount of light and detail the new camera picked up doing this at night compared to a similar shot from a few weeks back with the old one. Oh, I think I am going to have fun with this!