I had a terrible call yesterday from my dear chum Melanie who was in tears. Her neighbours had just called her at work to tell her that Zag, her gorgeous cat, had been hit and killed by a car which didn’t even stop. Way back when I was a student and we both shared a flat we got Zag as a tiny kitten, then just under a year later we got his sisters Dizzy. Melanie has always retained custody but I still get to play with the cats – they’re like my estranged cats and I get visiting rights, take them to the zoo at the weekend, that sort of thing.

12 years we’ve had Zag. So you can imagine I was extremely upset; Melanie, of course, is understandably disraught. Zag is the most fabulous cat (excuse the grammar, but I’m not ready to think of our lovely little furry chum in the past tense yet) – the most wonderfully friendly little individual. He would go up to anyone and charm even those who profess not to be animal friendly. Many of Melanie’s neighbours knew him because he would come up to them and ‘chat’ away. In fact he was so liked that it was the neighbours who saw what happened and came out to help him while the motorist just sped on to whatever mundane appointment was more important in their empty existence than Zag’s life.

Back in the student flat 12 years ago Zag would follow us to the shops, wait outside then walk us back, ‘talking’ to us all the time. He even followed us to the pub and on one occassion in the summer when the doors were open he followed us right in – naturally he charmed the barmaids and received lots of attention and adoration which he soaked up. He would leap out of the hedge at the top of our street when I would cycle home from college and run alongside with me, or sometimes leap up onto the pannier and ride the street with me. How he knew what time I would be home I don’t know – I never recall him owning a wristwatch, but he knew.

When Melanie moved into her own place with Zag and Dizzy he’d still meet me in the street when I went round. Going round to Melanie as soon as I finished work yesterday I still half expected him to leap out of the nearby gardens and walk me to the door. And then I realise that he’s never, ever going to do that again and it breaks me up. I look at this street and I think on the wee soul being left there on the road by some evil bastard who didn’t even stop. They don’t care about the fact they killed a beautiful, innocent creature and they don’t know or care about all the heartache they’ve caused, about the hole they’ve left in our lives. To lose anyone you love and care for, human or animal (and if you are the sort of person who thinks its stupid to grieve over an animal then you’re a compasionless fool and to hell with you), but to have them brutally taken from you is even worse.

But he has 12 years of being utterly adored, his warm, white tummy fur tickled whenever he wanted. He was a real cat-about-town – he loved getting out and about. He patrolled the neighbourhood, charming everyone and conning several dinners a day and many tummy tickles in many homes before returing to Melanie’s. I’m finding it really difficult to accept that such a lovely, lively little guy is gone. I know in time Mel and I will be able to think about him with a warm smile, remembering his antics (he looked like and acted like the Bacardi Breezer cat) but right now its far too raw and every time we think about him we both end up blubbing (and again if you’re the sort of person who disparages folk who get emotionally attached to animals, I don’t want to hear about it. I don’t discriminate when anyone’s in my heart, friend, family, partner or pussycat and after twelve years Zag is friend and family).

I was playing with him and Dizzy just a few days ago on the holiday Monday and took pics of both of them, which I emailed to Mel who was delighted. Bitterly she let me know how happy she was with some of the pics of them both just a day or two before this happened; one day we were happy then life crashes around you. I know that’s life and it happens all the time, but that doesn’t mean we have to like it.

And to the evil bastard who drove their car too fast down a quiet street lined with cars and didn’t even stop, didn’t even have the guts to take responsibility for their thoughtless actions – you know who you are; you drove right through Polwarth in Edinburgh and hit our beautiful, friendly cat who we’d loved since he was a kitten who could fit on your hand. You broke our hearts and you don’t even care, you drove on and left him lying in the street you evil, bastard. 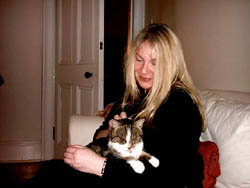 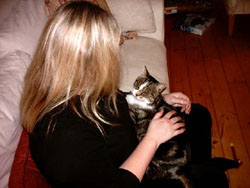 He brought so much happiness and warmth and delight to us and it hurts us to be without him. But the only way not to be hurt by events like this is never to form emotional attachments to animals, friends, family – and what sort of life would that be? It hurts and I want him back, but that’s not going to happen, but through the hurt I’m also happy to have had him in our lives. He was loved and adored and he made us so happy – that’s something that’s worth the hurt of loss and that’s what we need to remember. 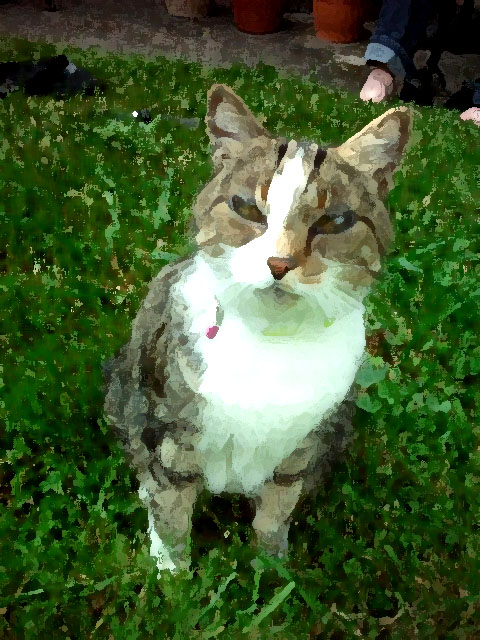 I took this just a few days ago and it breaks my heart to think they will be the last pictures I ever get to take of him.