Nice of the Catholic Church to take this opportunity to show the world they can adapt the the modern world by sequestering a number of 70 year old Cardinals (and what does a baseball team know about theology?!?!?) in secret to hold a ballot in a mysterious ceremony – no wonder so many folk read Dan Brown’s thrillers and think there must be some truth in them! And then elect a pope who is a former member of the Hitler Youth (admittedly it was compulsary when he was young) and who is often referred to as “God’s Rotweiller”.

Sounds like he’ll be able to reach out to minorities just the way Jesus did… And is it just me or when all the media attention was focussed on the Vatican chimney did any of you think what is going on in there? Are the cardinals having an indoor BBQ??? Perhaps they’re all skinning up and getting wasted and that’s where all the smoke is coming from… 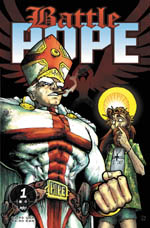 Come to think of it, I reckon some of them could do with a relaxing stoner session, mellow the old buggers out a bit (although in fairness, here in the UK men of such advanced years would be expected to work for another 20 years as High Court judges). And this all reminds me of a new comic I came across in the advance previews at work, due this summer, with the fabulous title Battle Pope – when he’s not saying mass he’s kicking ass! Actually I think it was around before but seems to be getting another chance at comic fame, or infamy depending on your point of view. Anyway, my old mate Adrock, suffering the pangs of ciggie withdrawal by stuffing himself with pasta in his new home in Oz certainly isn’t impressed with the new Pontiff.