Last night was our event with one of my favourite (and also local) authors, Iain M Banks in the rather nice environs of the Traverse Theatre. Actually I still think of it as the New Traverse as I remember the old, pokey but wonderful wee theatre squeezed into the back of a courtyard of tall tenements in the middle of Edinburgh’s Old Town (people used to drink in the cobbled courtyard after a play while watching the scenery and large props being manhandled out of an upstairs window on one of those fixed winches you used to see on barns and the like).

We had one of the two purpose-built new auditoriums for last nights gig. Being a very indie venue (it specialises in new Scottish writing) it is, of course, all black. I once attended a great evening there hosted by Harvill (when they were still a quality independent publisher) – lots of free wine, free books and a talk by the great Peter Mathiessen (one of the world’s great treasures). And being a book trade event there were a couple of hundred of us almost entirely in black. In a black auditorium. Pretty drunk by the end of it. Lots of very clever, well-read people in black in a black theatre, full of free wine (the booksellers not the theatre). Never seen so many well-educated people walking straight into doors and walls…

But back to the Banks event: it was a splendid evening for all. Iain was on great form for his hometown gig, starting with a reading from The Algebraist (my Alien review here), answering questions about his books, the Culture then digressing on all sorts of topics, from comparing his mainstream fiction writing to his SF writing (he had the analogy of playing a fine piano and playing an enormous, multi-keyboard cathedral organ) and a fair few political comments, including his own anti-war protest when he and his wife chopped up their British passports and sent them to Blair. 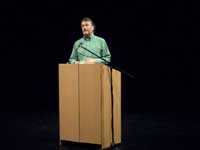 doesn’t this look like Iain is addressing a political rally? Presidential debate perhaps?!?!

After signing books for the fans, stock for the shop and, even more importantly, for my colleague Jonathan and myself, we all retired to the post-modernist design of the Traverse bar, where we were joined by a brace of other authors, namely Iain’s fellow Orbit stablemates , Charlie Stross and writer, poet and all-round good egg Andrew Greig (all four normally come along and try and support each other’s gigs when in town, which is nice). Ken kindly gave me a little insight into his next novel due in the spring, which I’m looking forward to enormously (being another of my favourite writers) and hopefully we’ll have a reading session with him as we usually do for his new books. Charlie was also telling me of some of his new publishing deals in the US, where he has been going on to great success I am glad to say and he is going to email me a proof of Accelerando in the near future. In between swigs of Belgian fruit-flavoured beer he told me that the reviewers at Locus had been enjoying his fantasy series so much they are demanding a fourth part and have been reading it on their own time, i.e. not as a book they are being paid to review, so it’s pretty obvious that are enjoying it.

Charlie later started running his ideas for a terrorist techno-thriller past Ken and myself. Fuelled by the ever-flatulent Guinness I suggested one way of subverting the most advanced of security scanners would be to have mystical fundamentalists who had developed the ability to create spontaneous human combustion by the power of their minds; in other words you couldn’t detect explosives since the terrorist was the bomb. Takes suicide bombings to a whole new level I thought, inspired by old Looney Tunes cartoons where someone drink gelignite then swallows a match. Ken seemed to find it amusing but I’m unsure how it would fit into Charlie’s ‘plans-within-plans’ proposed techno-thriller. But lest you think we only talked drunken SF bollocks, I’ll have you know Andrew Greig and I managed a brief discussion on Joyce and Ulysses, Neal Stephenson then on to the usual drink-fuelled morass of conversation (the type which made great sense at the time but you can’t properly recall next morning).

So a fine result all round – Iain on top form, a very happy and content audience, some drinks with chums (Matthew put in an appearance but couldn’t stay long as his plans for world destruction using his tech project are creating great demands on his time). And as a bonus I finally got to meet the lovely Jessica from Orbit, who is a very nice lady who kindly supplies me with some of the best of their new titles each month (including a nice early version of the Algebraist proof). First event we’ve had since the hiatus caused by the (supposed) imminence of our refit, then the actual refit itself. In fact we’ve not had an event in our branch since the one with Peter F Hamilton and back in the very early spring. And after having been stuck unwillingly down in the stock room for a few months now it was like being a real bookseller again, just briefly. And it was fun. 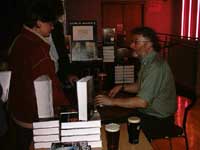 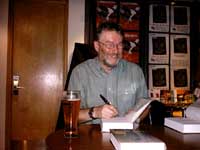 If anyone from Guinness is reading this, please note the careful product placement and note I am open to sponsorhip. As for the second image, well as all professional booksellers know the way to ensure a mound of signed stock after an event is to dangle booze in front of your writer. Works every time.