Soooooo misty here in old . Hot weather meets pouring rain drifting over from Hurricane (he denies all responsibility, predictably, but I note he has shaved his bouncy locks and assume this is because he is fed up being recognised from this week’s weather forecasts) and voila Mr Heat and Miss Rain get together, they love each other very much and they have a little baby Mist…

Actually, I’m not complaining – Edinburgh, which looks pretty wonderful in all weathers, looks astonishing in the mist, like something from a piece by my dear old RLS. I took this quick snap on my way into work, with Calton Hill almost invisible (only a few hundred yards away) in the mist. The Castle is glimpsed through drifting haar, it’s immense rock solidity permeated by the mist until it seems less real, a flickering dream image of a castle. On the way home from an excellent meal with some chums the other night it looked quite remarkable. It is Festival time in – the city has doubled as the Fringe, International Festival, Film Fest, Book Fest and Jazz Fest all hit town, the biggest arts festival on the planet. From you can see the stadium seating erected on the esplanade of the Castle for the Military Tattoo.

For the evening performances, as the late summer sun sets they light great, flaming braziers along the ancient battlements. It looks fantastic normally, but in this summer mist it was like a scene from 400 years ago. Mist curling around the extinct volcano of Castle Rock, around the immense stone walls, glowing a deep orange-red as the flames flicker through the haar. Add the faint sound of the pipes and drums from the show and it’s one of those sights that even a jaded native has to just stop and stare at, drink it in. On nights like this in this city you could almost believe that Burke and Hare will come looming out of the mist, carrying a body off to Knox, down a winding medieval close. At the West End of Princes Street are the mock-Gothic Victorian (therefore modern by our standards) (the one with the often thought-provoking artwork I’ve posted before) and the unusually-shaped (for ) Saint Cuthbert’s. Both have lovely, overgrown old boneyards (in the café opens out onto the graveyard and you can drink your fair-trade coffee among the tombs). Looking down into them from the top of a double-decker bus it looked as if the mist was growing straight out of the ground, as if the damp tombs themselves were bringing forth this murky whiteness and I couldn’t help but imagine what sort of odd creatures came out with it, shielded from curious mortal eyes by twin blankets of mist and night, cavorting safely past the tomb of James Hogg. Silly? Oh, so you say, but were you there you too would start thinking ‘did I see something strange move in the mist? There by the tomb?’ You too would listen closely, your sense of direction confused by the haar – did you hear something scratching? Like something with large nails or claws on old stonework?

As always when the mist curls its lazy tendrils around I think on Boorman’s excellent Excalibur and Nicol Williams rather fun Merlin, summoning the Earth Dragon.

Uther Pendragon (awakening with a start in a mist-covered stone circle): “I dreamt of the Dragon.”

Merlin: “I have awoken him.” (gestures to the surrounding mist) “Cannot you see, all around you, the Dragon’s breath?”

I know the scientific rationale behind the formation of this type of weather. But I prefer the notion of the Dragon’s breath. A creature like no other, a part of the very Earth of Caledonia. When I was a little boy I used to dream sometimes that the many hills and mountains of were covering sleeping dragons and dinosaurs. I wondered what would happen should they awake, shaking off their rock and soil coverings and stomping across the modern world. I think I still like that idea and perhaps that’s why I like the idea that this pervasive mist is the warm breath of some great creature of the earth, stirring in it’s sleep beneath the Castle.

I’m about halfway through reading Medieval Scotland by Alan MacQuarrie to review for History at the moment. The title is misleading as the book is looking at how the various disparate tribes and groups came together to form what we know as the kingdom of Scotland, so it goes from the Roman period up to almost the Renaissance. My good mate Vegar would probably enjoy the chapters on the 8 and 9th centuries with all his Viking ancestors running around pillaging right, left and center (in between being rather nasty and violent to each other as well on many occasions!). Just reached past that and got up to the historical Macbeth (as opposed to Shakespeare’s enjoyable but as accurate-as-a-Hollywood-movie version), by which time the Picts have vanished from history, leaving only their beautifully carved standing stones and a mysterious legacy in our Celtic bloodstream (some medieval scholars thought them mythical). A few hundred years earlier than this and mention is made of the brave warrior-king of one of the many small kingdoms of that fragmented period of ’s early history. The king is called Urien and he inspired other leaders to form a great alliance against the waves of invaders from across the . Alas, Urien was betrayed to death by his kinsman Morgan, although his son Ywayn took up the fight.

Urien. Ywayn. Morgan. Sound in any way familiar? Trying to unite the tribes to resist the brutal invaders? Betrayal at the final battle by a blood relative? Little is known about the events – they aren’t called the Dark Ages for nothing – little more remains apart from king lists and the occasional short history normally written centuries later. The book here is traversing the edge of known history. No straight-edge here; it is a nebulous, ever-changing line, it is the shifting border-lands where our history meets our myth and collective folklore. We can’t have one without the other – even a well-researched historical narrative is still a form of myth-making, partly in the grand sense and partly in the modern, scholarly Barthes sense. It does rather reinforce my point of a few days ago that to look for one single source for Arthur is a pointless endeavour – how many tales like that of Urien and Morgan must have been told back then? How many were sung by bards and recorded by monks in Iona and , being mixed and re-written as the long centuries past? How many of our tales came from those early, dawn-days of these islands? Our version of the Australian Aboriginal’s Dream Time. In a place like this it is easy to see both history and myth each and every day. They both embroider our nocturnal slumbers, decorating our dreams by night, these stories still work in us, inspiring us, defining us. The telling of stories is one of the characteristics that defines every human culture throughout thousands of years of history. These are ours. Perhaps at night we tap into the dreams of the slumbering Dragon, listening to his tales in our sleep. That’s a nice thought to go to sleep to – good night, folks. 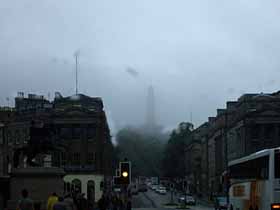 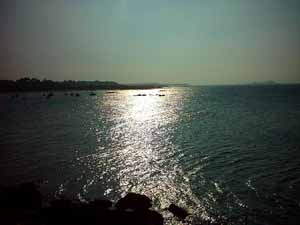 misty Edinburgh – compare to this clear-skied, shimmering sunset across the River Forth only a few days ago